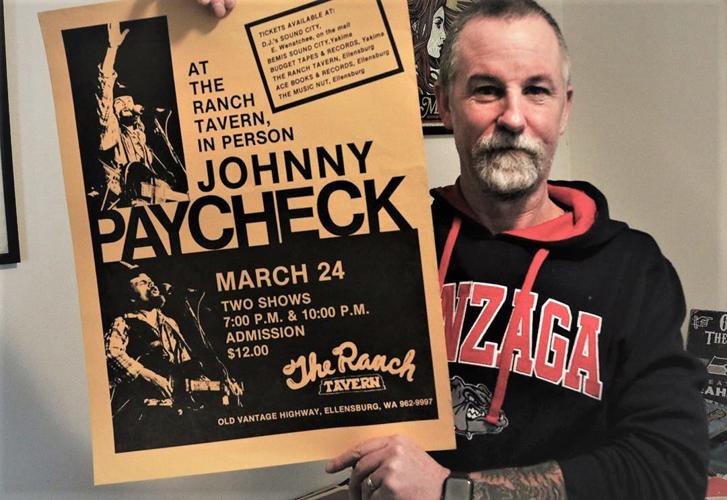 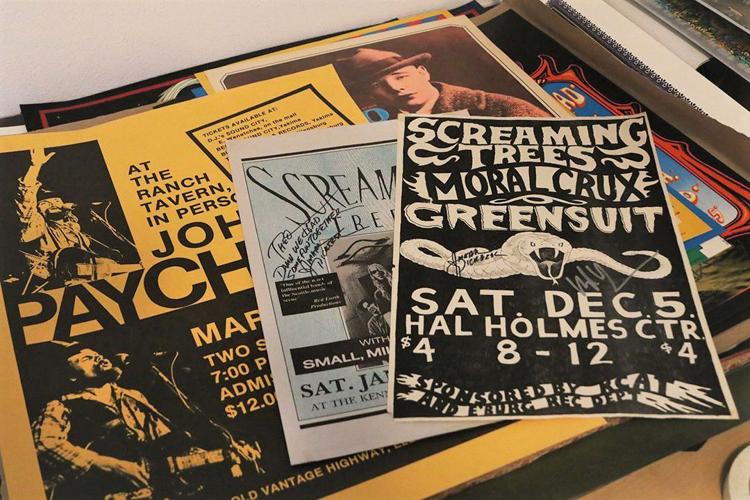 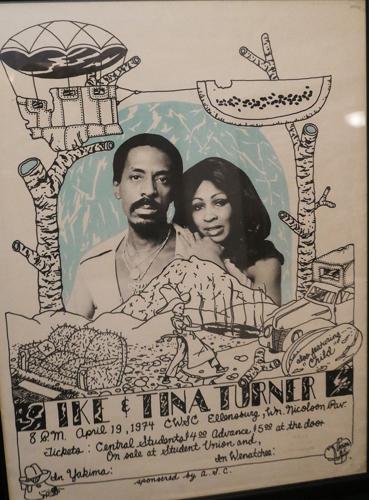 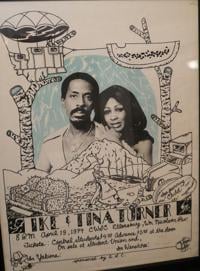 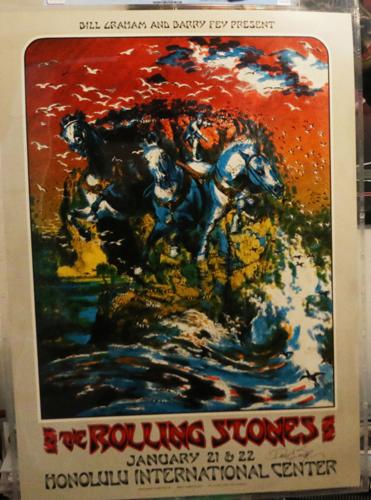 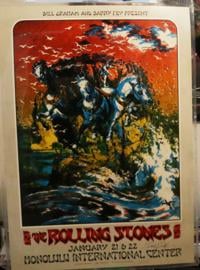 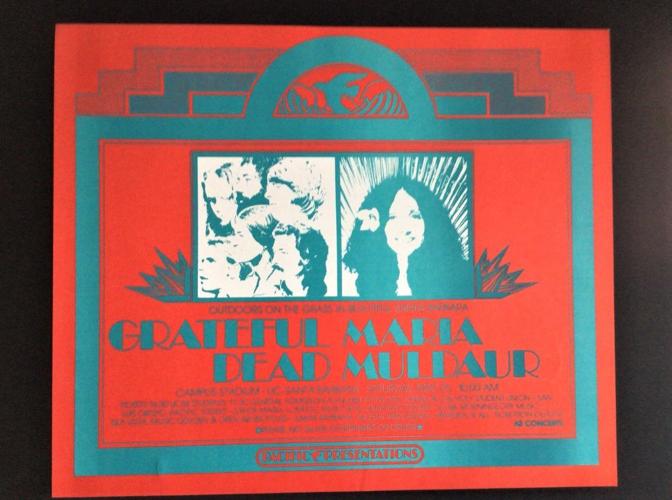 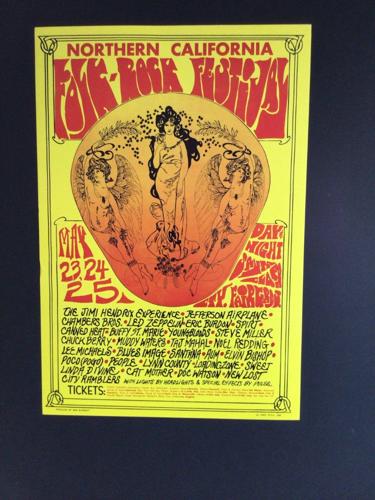 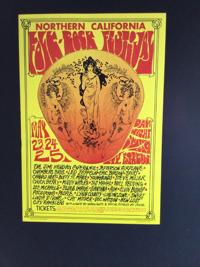 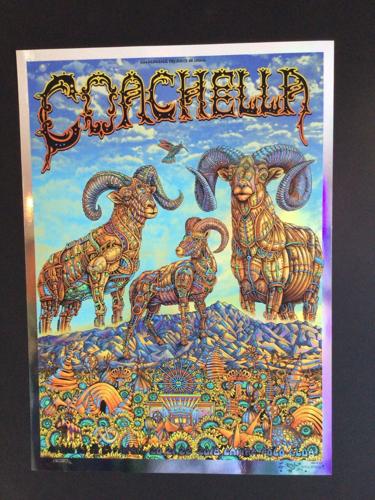 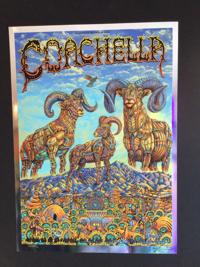 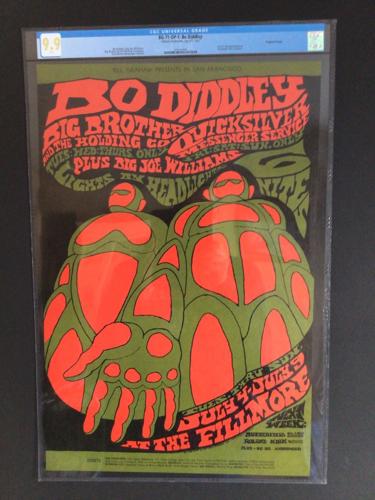 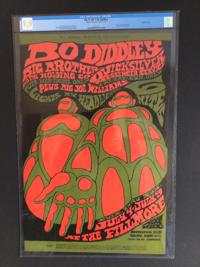 They started as a way to advertise, simple design and ink, to let people know who was playing at what venue.

But as the rock ‘n’ roll music scene evolved in the mid-’60s, so did the posters and handbills promoting soon-to-be iconic West Coast venues like the Fillmore Auditorium, Fillmore West, the Avalon Ballroom and the Winterland Ballroom.

On the East Coast, the Fillmore East became promoter Bill Graham’s showcase of world-class talent in an iconic venue to make and witness the music of the times. In Denver, the Family Dog worked the Rocky Mountain region, paving the way to iconic shows at the legendary Red Rocks Amphitheatre.

California promoters Bill Graham and Chet Helms began to see the dollar signs behind the poster and handbill market when concert goers would grab the poster off the wall and take it home for decoration.

“They’d see all these kids walking around with the posters right after the shows. They’d grabbed them off the telephone poles or buildings and took them home because they were nice pieces of artwork,” said local vintage poster collector Theo Denner, who started taking his collection seriously in 2008.

“A lot of times the early posters didn’t even have the date on them. They were just letting people know where the show was. But (promoters) recognized the potential and eventually turned it into some sort of sales thing. They had graphic artists do the art and started printing more than was needed to promote the show, so there was something else to sell.”

Like baseball cards or other forms of collectibles, the vintage rock posters are graded by specific quality standards that take these rare bits of art to the next level.

“I’ve sold posters anywhere from $100 to $4,000 or $5,000,” Denner said. “You can’t be a fan and a collector, because it clouds the view from a financial point of view. You can’t help it sometimes, but I had to make a conscious decision to focus on the business.

“You don’t have to like a certain band to sell the poster, which happens a lot. It’s just business. I try and take a scientific approach and research what each poster is worth, based on previous auction sales of the same poster. Sometimes I can buy one for $1,400 and sell it for $2,000 or $2,500. I have one now that I paid $90, it went on eBay yesterday and it’s already up to $250.”

But sometimes the fan just comes out.

As he sat in his office at his home, classic posters of iconic bands on the wall, he glanced over at the poster of the Ike and Tina Turner Review when they played Central Washington University on April 19, 1974. The ticket price was $4 for students and $5 at the door, those were the days.

“Everything in here is for sale … except that one,” he said with a smile, remembering the day Tina stomped it down in Ellensburg. “Back in the day, Ellensburg had a thriving music scene.

“I saw Nirvana at Hal Holmes. Soundgarden at Central. I’ve seen the Screaming Trees numerous times. I used to have a fake ID, so I got into a lot of places like the Ranch, to see music.”

His local collection includes the prized Ike and Tina poster, maybe the only one left he says. He has one of Johnny Paycheck playing The Ranch Tavern, a couple of the Screaming Trees playing Hal Holmes.

Like a connoisseur of fine wine, his collection is well maintained, laminated for protection as well as to preserve proof of authenticity. Some of them are worth thousands of dollars. Needless to say, there’s no thumbtack holes along the edge, lest take away the value.

“Most of what I have right now is West Coast concert stuff. I have quite a bit from the Denver shows,” he said. “I have very little from East Coast right now, but that’s not to say that won’t change.”

His collection has close to 1,000 posters, which includes the May 23-24-25, 1968 show when Jimi Hendrix and Led Zeppelin shared the bill during the Zep’s first American tour. The Northern California Folk-Rock Festival had bands like the Doors, Santana, Jefferson Airplane, and Country Joe and the Fish and others. Not a folk-rock band in sight, but an amazing lineup nonetheless.

THOSE WERE THE DAYS

There is the Fillmore Auditorium poster with acts like Bo Didley, Big Brother and the Holding Company, Quicksilver Messenger Service and Big Joe Williams. Even though Seattle was not a thriving mecca during the ‘60s, it did blow up with the emergence of the Grunge scene in the mid-80s. Denner has a poster promoting Pearl Jam at Safeco Field May 8, 2018, which is autographed by the band.

The former D&M Construction superintendent has since retired. But there was a time when the construction industry took a turn for the worse in 2008. His collection went from being cool stuff to a business that kept his family a float.

“My dad (Richard Denner) grew up in Oakland and started grabbing posters off the wall in San Francisco and Berkley in the mid-’60s. He probably had 40 or so,” Denner said. “He gave them to me and said, ‘These are probably worth some money.’

“So, when I lost my job, I had told my wife (Melissa) I would help her get her masters. I started researching what the posters were worth and what they would bring at auction. And come to find out, may dad was right. They were worth some money. It just sort of took off from there.”

His reference material includes, “The Collectors Guide to Psychedelic Rock Concert Posters, Postcards and Handbills (1965-1973)” by Eric King, the “Psychedelic Art Exchange” and other materials by those who laid the groundwork.

When one door closes, another one opens.

Denner took a gift from his father and turned it into a second career. His collection can often be seen at Cornerstone Pie in Ellensburg.

“(Cornerstone Pie owner) Mark (Holloway) and I have been friends for years. So, when he opened that place up, I had a bunch of posters I just bought from a woman on the coast, which was my first big purchase,” Denner explained. “With that came a bunch of frames. I just wanted the posters.

“So, I talked to Mark about it. I always thought it would be kind of cool to have my own show and Mark told me I could have a show there. I switch ‘em out, occasionally. I’m always selling stuff, so I switch it out with something else.”

Denner still holds onto the idea that “Back in the Day,” will circle back around to a time when the music scene thrives once again in the Kittitas Valley.

His vintage posters will be on display at The Mule Tavern, opening on the First Friday Art Walk in April. As Back in the Day lingers in the hearts and spirit and it will be an opportunity reminisce and remember the music that shaped a generation.

Where: The Mule Tavern

Rodney Harwood: award-winning journalist and columnist. Lover of golf and the written word. I can be reached at rharwood@kvnews.com

Sign up today, or manage your subscriptions, to one of our great newsletters:

Check your email for details.

Submitting this form below will send a message to your email with a link to change your password.

An email message containing instructions on how to reset your password has been sent to the e-mail address listed on your account.

Your purchase was successful, and you are now logged in.

A receipt was sent to your email.