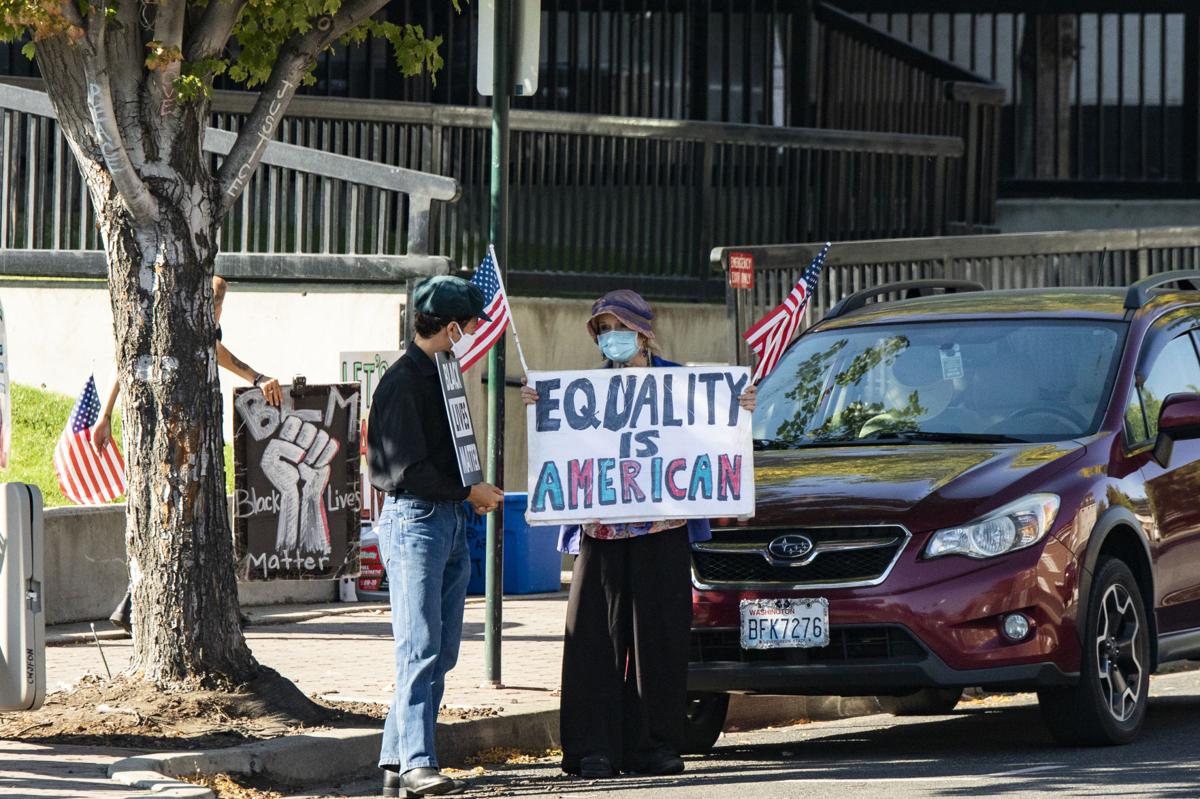 The Black Lives Matter protester Ruthie Erdman, right, speaks to a fellow protestor on the 99th day of protesting Tuesday on the southeast corner of Kittitas County Courthouse. 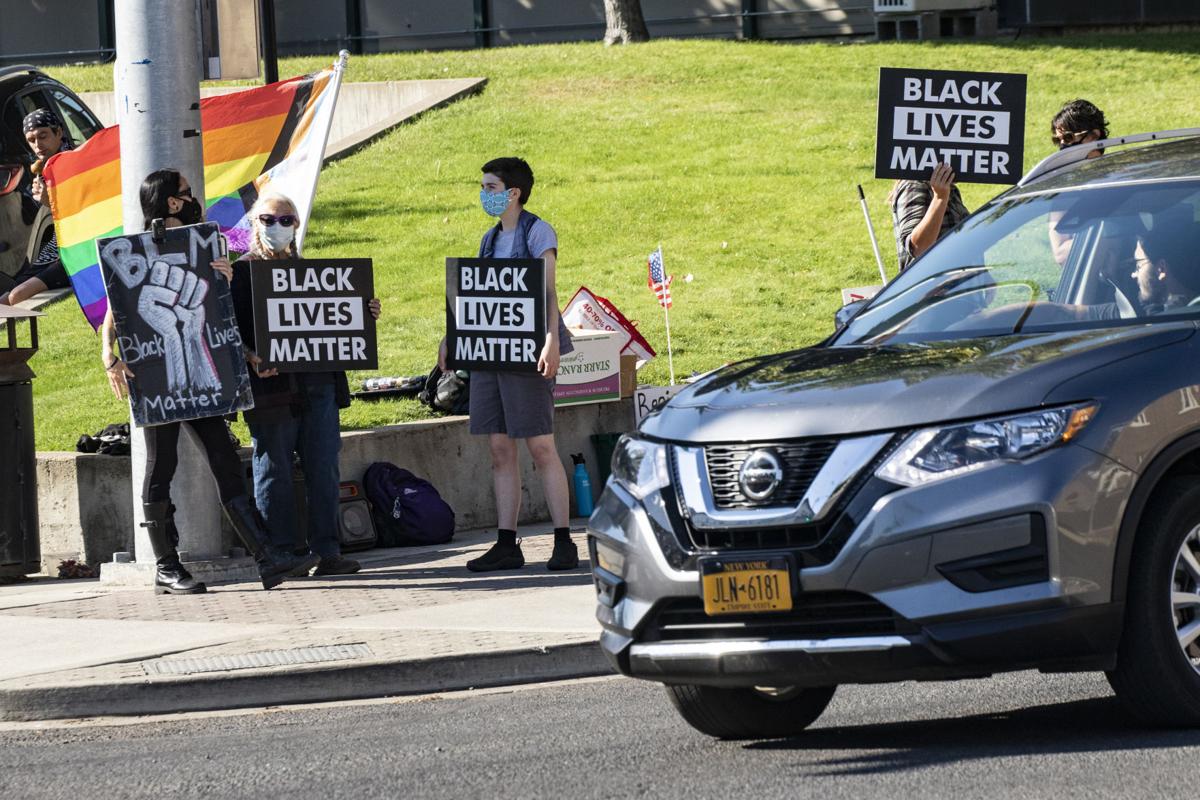 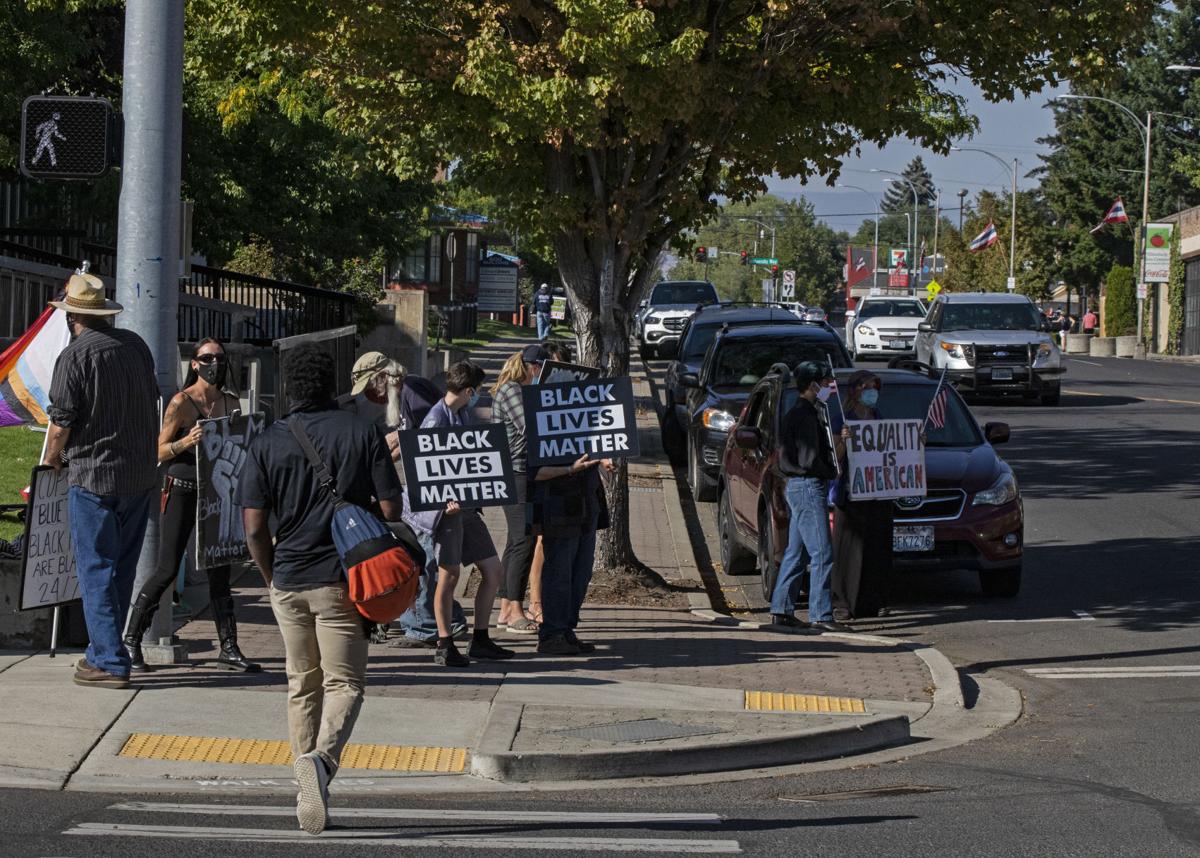 The Black Lives Matter protester Ruthie Erdman, right, speaks to a fellow protestor on the 99th day of protesting Tuesday on the southeast corner of Kittitas County Courthouse.

Todd Mildon’s family has been a part of Ellensburg for seven generations. He has also been attending many of the protests, with forms to get people registered to vote.

“I think this is indeed the largest civil rights movement in history for a little town like Ellensburg,” Mildon said. “We have had people on the streets for 100 days in a row, in large numbers, for one cause, racial justice. I have never seen anything like it.”

Mildon said what makes this movement powerful is they are at 100 days and they show no signs of stopping.

The protests were organized by Sara Omrani after the first Black Lives Matter march in Ellensburg on June 1, where one of the marchers made a call to action, saying he wanted to see people in front of the courthouse every day until there was justice.

Omrani heard the call and made a Facebook page to organize the protests. She said over time they have become more organized and people continue to join their cause.

When she created the Facebook page, she didn’t think this many people would be in support for this long. She figured she would just be making the Facebook page to help organize people in the movement.

She said the goal of the protests is to ensure justice for everybody, and to hold police accountable for their actions. Locally, she would like to see independent community council that reviews conduct, and force used by police.

She said the response from the community has been very positive, and they have many friendly waves and honks when they are on the street corner. However, there has also been a large amount of people who don’t like what they are doing. She said these counter-protesters keep them inspired to be on the corner every day.

“I’m not going anywhere, and I don’t think the group wants to go anywhere as long as people like the counter-protesters keep showing up. Like the guy that showed up and coughed on us, we had a kid come up and purposefully cough on some of our older people,” Omrani said. “Until the climate of this town changes, and it doesn’t feel unhospitable to some people, we will be out here.”

Protester Ruthie Erdman believes many of these counter-protesters think they are from out of town or being paid off by “some nefarious organization” to try and change the culture of Ellensburg.

“We are all locals, all of us,” Erdman said.

Erdman herself has taught in the English department of Central Washington University for the last 27 years.

Fran Cuhtahlatch has been protesting for BLM for weeks. During one of the corner protests, she was grabbed at by a counter-protester who she said called her an “old lady with lots of issues.”

Ormani said they have been called lots of hurtful things that they have to shrug off, including death threats, rape threats and racial slurs.

The overall community still seems to be in support of the movement, and according to Ormani, people have come to accept they are here to stay. The group has taken care to remain peaceful, and not become the rioters and looters the opposition calls them.