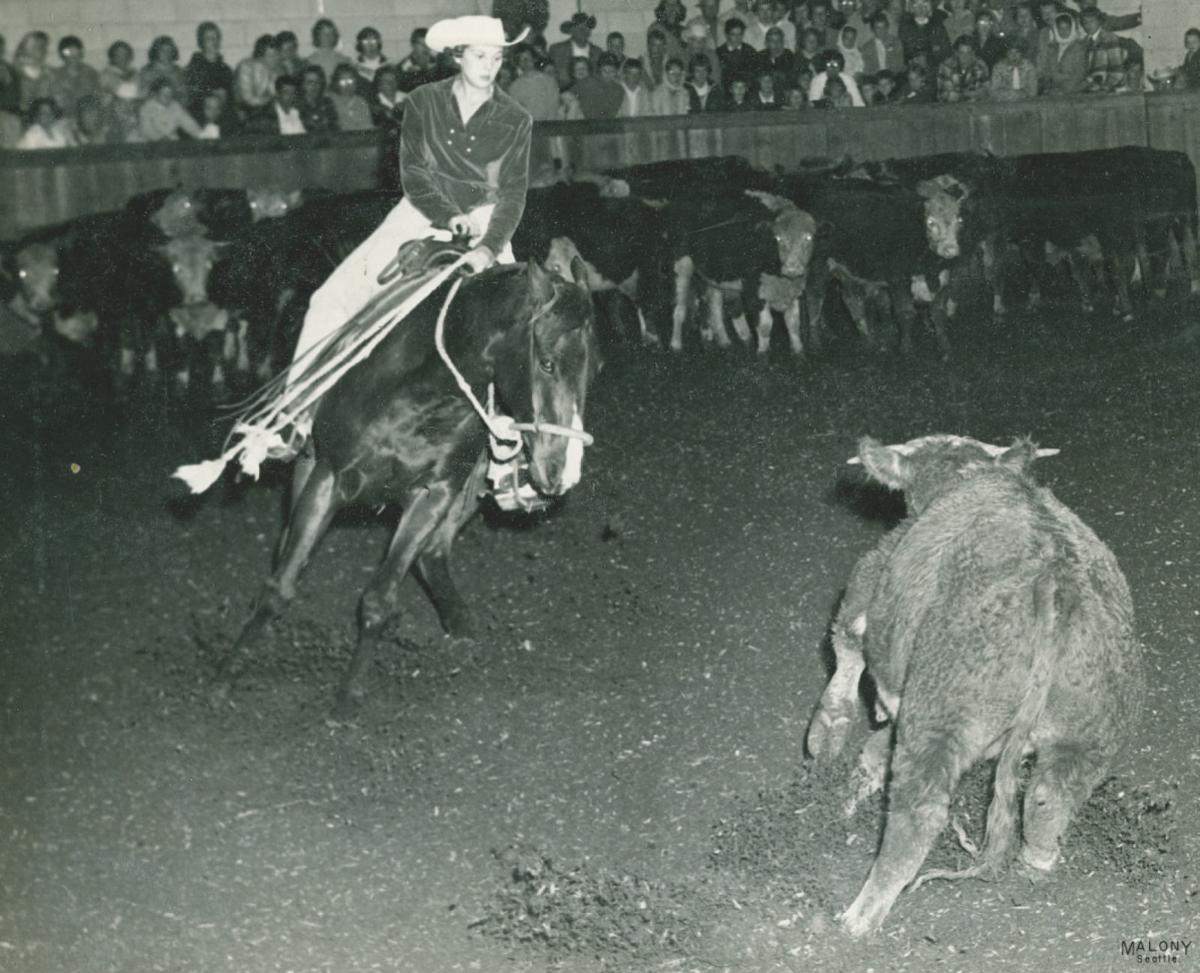 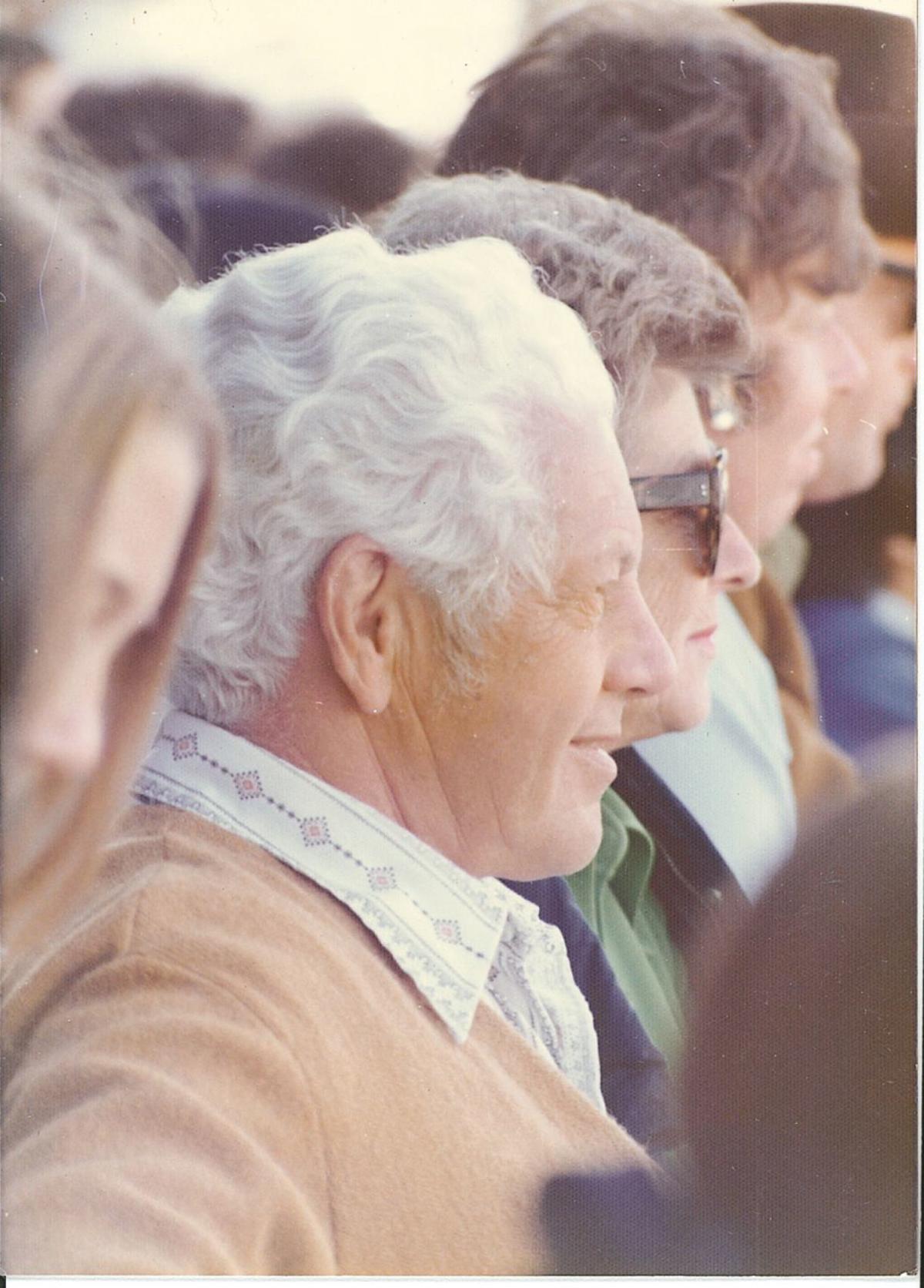 John Burkheimer, Thorp rancher and 1950s Rodeo Board member, and the Burkheimer family are being inducted into the Rodeo Hall of Fame this year.

John Burkheimer, Thorp rancher and 1950s Rodeo Board member, and the Burkheimer family are being inducted into the Rodeo Hall of Fame this year.

The John and Frances Burkheimer family is being inducted into Ellensburg Rodeo Hall of Fame in both the rodeo family and volunteers categories for 2019. John and Frances moved to Ellensburg with their children Jean, Ann, John Jr., and Bob in 1950 to become ranchers. They quickly became involved in the local community and formed many long-standing friendships over their 28 years of ranching.

John was a cattleman and investor who served on the Rodeo Board for nearly a decade. His vision for the Ellensburg Rodeo’s future helped move it into the national spotlight by developing new sponsors, increasing the prize money, and professionalizing the entertainment. He helped bring in national acts like Gene Autry and Slim Pickens, and as parade director moved it from all-horse to floats and motorized vehicles. Without using a bridle on his horse Bimbo, he also performed cow-cutting exhibitions on the rodeo’s old track.

His community involvement did not stop at the rodeo. He helped form the Kittitas County Public Hospital District and chaired its Board of Commissioners for 12 years; he also served on the Thorp School Board, was a member of the Ellensburg Elks Golf and Country Club, and the Yakima Golf and Country Club.

Together, John and Frances enjoyed many worldwide adventures, most notably safaris in Africa, India and Asia. Frances chronicled her travels extensively, conveying her interest in the people and customs of those countries, making many long-lasting friendships along the way. Her tenacity and enthusiasm resulted in her out-performing many of the men in skeet shooting events around the Northwest, often hitting 100 straight targets in competition. Besides skeet shooting, she enjoyed golf, tennis, skiing, and was an active volunteer. She was a member of the Seattle, Yakima, Ellensburg, and Desert Island Golf Clubs, the Seattle Tennis Club, the Sunset Club, and the Elizabeth Fischer Orthopedic Club. After John died, she moved to Seattle in 1978 to be near her family.

Their youngest daughter, Ann, was the 1959 Ellensburg Rodeo Princess and represented Kittitas County in a wide variety of venues statewide, like Bremerton, Seattle, Ephrata, not only exhibiting her riding skills but her speaking abilities. She and her father were competitors in cow-cutting locally and regionally. At one of the competitions, the Northwest Reserve Cutting Finals, John won the Open class trophy, and Ann won the novice one. Ann also performed cow-cutting exhibitions at the rodeo.

By 1969 Ann had become an airline stewardess and made the cover of United Airline’s Mainliner magazine with a feature article titled “High-Flying Cowgirl.” It was a pictorial essay showing her rounding up cows on the ranch, cow-cutting, as well as in the pilot’s seat as a licensed pilot and walking through an airport in her red stewardess outfit. The gist of the article is about her ability to fly between the jet set and the corral, between “buttons and bows” and “chaps and spurs.”

This dual identity characterizes the Burkheimer family. John owned property in Seattle and Fiji and was a real estate executive in the Seattle area, but he had ranches in Bothell and Ellensburg. He went on numerous safaris to Africa but came home to roping calves, branding, and herding cows from one pasture to the other, as well as in the High Valley Range which is now the LT Murray Recreational Area. It was this awareness of both sides of the culture that made him such an effective member of the Ellensburg Rodeo Board.

For years, this legacy of bringing different cultures together has been a Burkheimer trait. Ann helped plan the Gold Buckle dances at the Springwood Ranch and son Bob was one of the three founders of the Gold Buckle Club, an organization of boosters who support the Ellensburg Rodeo. Even in that title is the dual nature of the family’s focus: getting the “gold” to help support the “best show on dirt.” Throughout his professional life, Bob has worked to get these two sides together.

Bob said, “The Ellensburg Rodeo has been a tradition of our Family since the early 1950’s. Every Labor Day weekend we would look forward to inviting friends to our community to experience the cowboy culture and the commitment of local volunteers who proudly show off their community and help preserve the Cowboy culture.”

Of course, as the son of a board member, Bob was also volunteered for many things. As an act during one rodeo, his burro named Pedro would buck Bob off gently, then stand still. Bob attempted numerous additional mounts, but never completed a successful ride, something Bob had trained Pedro to do. In 1967, Bob was an extra in a clown skit.

After an explosion and smoke made the real clown disappear, Bob leaped over the fence in an identical clown outfit and fell flat on his face, which was probably funnier than the planned version. While his father was directing the parade, Bob earned his rodeo stripes the old-fashioned way: as a pooper scooper.

Son John Jr. was an accomplished horseman and early member of the Kittitas County Junior Sheriff’s Posse, a group of 22 boys under 18 years of age. The Junior Posse was formed in 1958, and their purpose, besides performing complicated drills on horseback, was also volunteerism, like being available for search and rescues and riding in regional festival parades. They competed in “Play Days” against other regional riding groups running relay races, pole bending, and other feats of horsemanship. John Jr. excelled in these events.

This difference is being celebrated at the Induction Banquet on at 5 p.m. Aug. 29, at the Central Washington University Student Union and Recreation Center Ballroom.