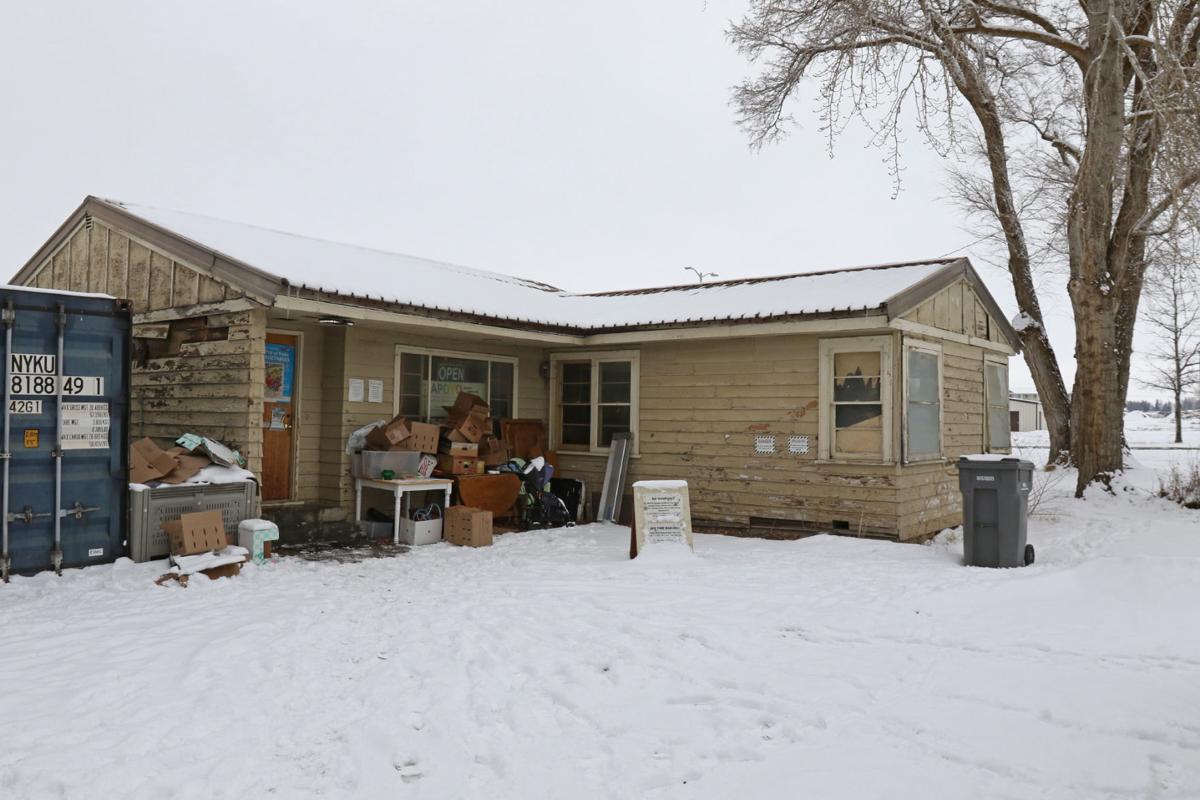 Central Washington University has announced it will not renew APOYO food bank’s lease at its current location after June 30. APOYO’s current home was was rated to be the building in the worst condition on campus in 2014, prior APOYO’s moving into the structure. 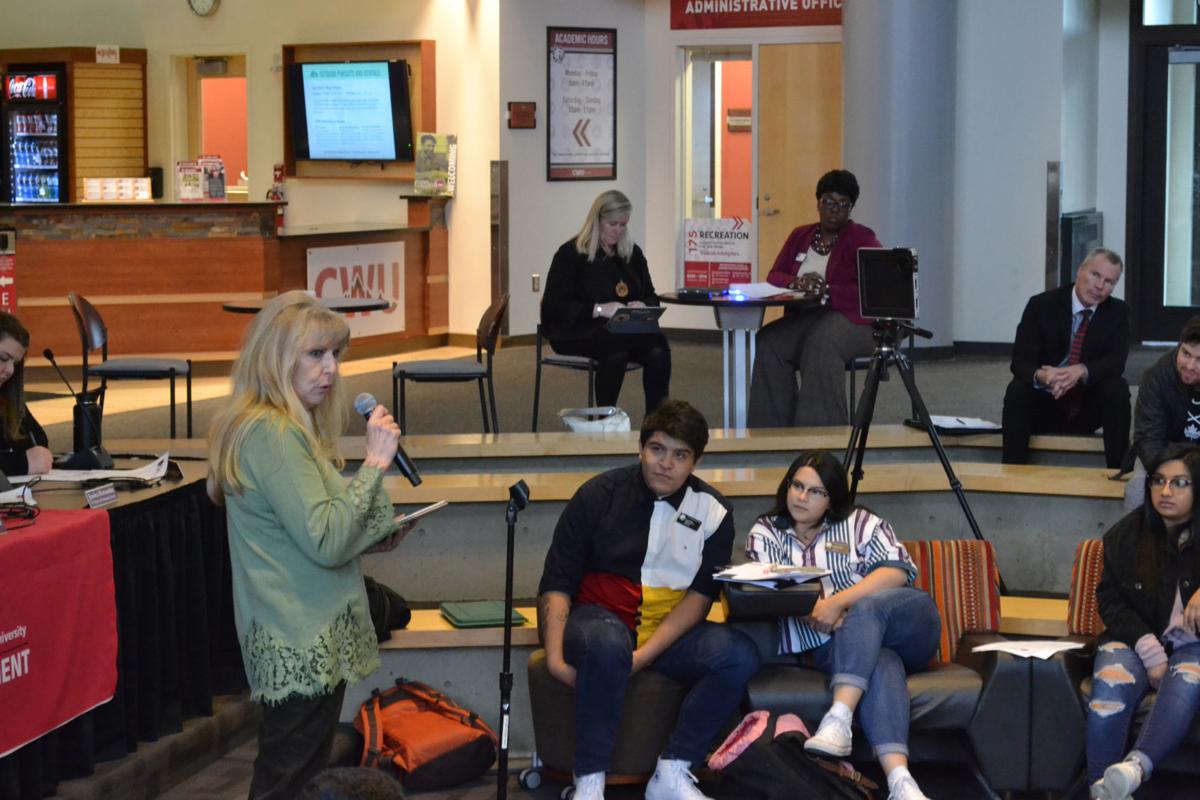 Patricia Garrison speaks to students and faculty at the ASCWU meeting Monday.

Central Washington University has announced it will not renew APOYO food bank’s lease at its current location after June 30. APOYO’s current home was was rated to be the building in the worst condition on campus in 2014, prior APOYO’s moving into the structure.

Patricia Garrison speaks to students and faculty at the ASCWU meeting Monday.

In its time of need, the APOYO food and clothing bank is finding helping hands and voices of support.

But one outreached hand is being viewed with suspicion.

On Monday the Associated Students of Central Washington University (ASCWU) came out in support of APOYO food and clothing bank.

This comes after Central Washington University’s decision to not renew the lease for APOYO. APOYO’s secretary/treasurer Patricia Garrison and husband, APOYO president Philip Garrison said that this decision leaves them with nowhere to go.

ASCWU passed a resolution to help APOYO, which included informing students and community members to keep using APOYO’s services to show they are used and appreciated. It also included the demand to provide APOYO with a new and adequate space by the end of June, the deadline for APOYO to move out of the location. ASCWU even suggested moving APOYO into the New York Teriyaki building which is currently owned by CWU.

While ASCWU is pushing for APOYO to be granted a new and improved location on campus, CWU is taking action to help merge APOYO with the FISH Food Bank. CWU Vice President of Public Affairs Kremiere Jackson said the university is a part of this community and wants to make a scenario where everyone wins.

Jackson also said the university has been trying to “partner with FISH and bring to the table APOYO for conversations around where the sticking points are with how they can be absorbed into FISH.”

“FISH is like The Borg, they just want to absorb us,” Patricia Garrison said referencing a Star Trek villain who assimilates entire civilizations. “They say they don’t want to change our culture, but my response is ‘no, they want to destroy our culture.’ … They are like The Borg, and Central is trying to drive us into their arms.”

APOYO is a food and clothing bank that describes itself as providing ethnic foods to a diverse population. Many workers with APOYO are bilingual. APOYO requires no paperwork and does nor limit the amount of times a persn can get food. It serves 300-400 families a month, two-thirds of whom are Hispanic.

FISH Food Bank executive director Peggy Morache said they want to combine APOYO with FISH by creating an APOYO section of the FISH pantry. She said they have a wall that is 10-feet wide to support APOYO customers.

CWU Dean of Student Success Gregg Heinselman said student leadership has the right to recommend a position on topics, and he would be meeting with Equity and Services Council, as well as LatinX communities on campus.

Heinselman said one of the reasons he decided not to renew the lease was because the arrangement with APOYO was not providing the university with any benefit. The way APOYO could provide benefits is as a place for students to volunteer and intern. Heinselman said that the university had not received any volunteer reports from APOYO in the 13 months he has been Dean, nor have any reports been sent to the CWU Center for Leadership and Community Engagement (CLCE).

However, the Garrisons recently provided emails showing they have sent timesheets to CLCE, and claim “the Dean should have all these files in his office, since we submitted them every week, sometimes twice a week, throughout the academic year.”

CWU does have records of all the students who volunteered at APOYO by going through CLCE, this accounts for 238.5 hours worked in 2019 with 59 participants. This does not account for the students who worked with APOYO directly, which are the reports that APOYO sent to CLCE and the reports CWU is claiming to have never received.

Heinselman said another reason behind this decision is because state law prohibits the gifting of state resources. He said the law was clear to him that CWU should not be using university resources to support APOYO, especially when FISH exists in the community.

“To feed people is not a fundamental part of our mission as an institution as a government agency,” Heinselman said.

Patricia Garrison said after this decision was made public, they had a large number of people volunteer at the food bank to show their support. She said about 35 CWU students showed up Saturday to help distribute food and straighten up storage containers.

“When those students showed up, I was just about ready to fall on my knees and thank the God,” Patricia said. “We didn’t organize it, they just showed up out of nowhere. … I was just astonished at that support.”

Morache said this is not the intention of the potential merger, and that APOYO will be able to keep its culture. It will simply be a “one stop shop for clients who currently use both APOYO and FISH.” She also said FISH would consult the Garrisons to come up with an inventory in the event of a merger.

“The question is do we trust her judgement, and do we trust her period?” Philip said. “I am afraid she doesn’t know anything about the people who come from out of county and I just don’t trust her to do what she is saying. I think we might very well get a note in six months saying, ‘well we tried but it just won’t work.’”

ASCWU, according to Hernandez, is very disappointed and sad that the lease wasn’t renewed and that they are hoping that this is an opportunity for them to be moved to a better and more adequate space.

The current space being used by APOYO is located near the CWU Challenge course on 18th Avenue. The space was rated to be the building in the worst condition on campus in 2014, a year before APOYO was moved into the location.

The Garrisons feel as though they have never been treated well by the university. They have been moved multiple times in the 20 years they have been located on campus, and there has always been the threat CWU might not renew the lease. They said every decision CWU has made regarding APOYO has hurt them, and the university has been pushing them to the edge of the table for years, and just pushed them off.