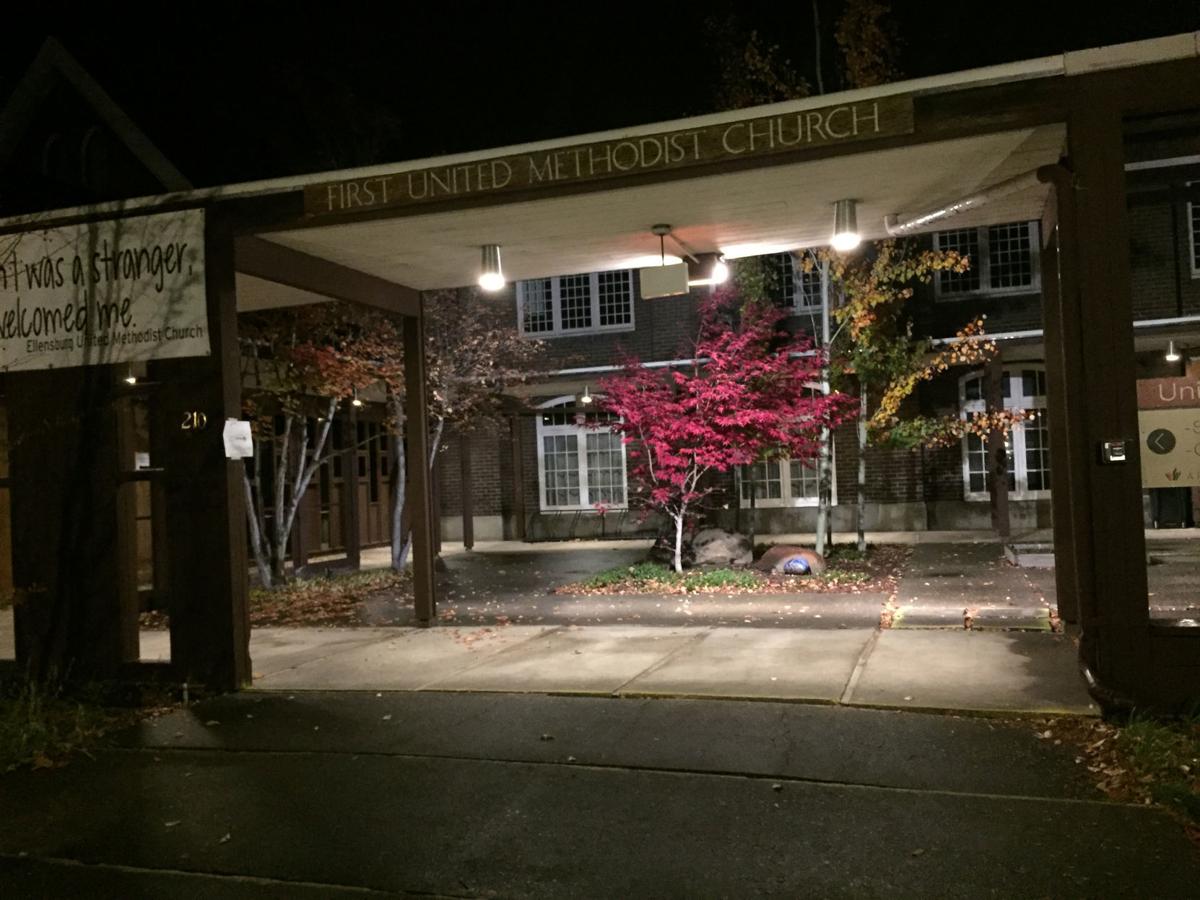 The First United Methodist Church on Ruby Street is one of seven Ellensburg churches that provide a place for homeless people to sleep during the winter months as part of the Cold Weather Shelter program. 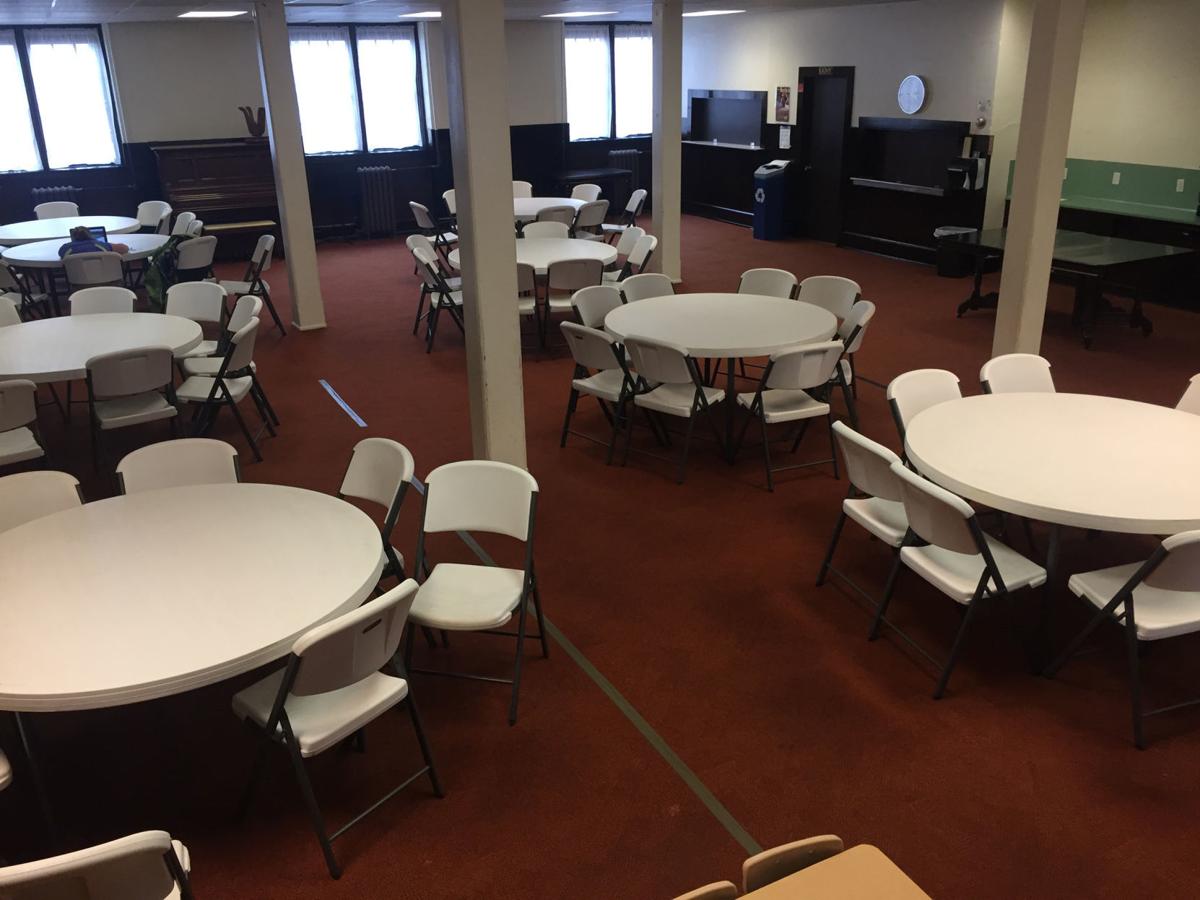 The United Methodist Church on Ruby Street makes use of its fellowship hall for homeless people to sleep in as part of the Cold Weather Shelter program in Ellensburg.

The First United Methodist Church on Ruby Street is one of seven Ellensburg churches that provide a place for homeless people to sleep during the winter months as part of the Cold Weather Shelter program.

The United Methodist Church on Ruby Street makes use of its fellowship hall for homeless people to sleep in as part of the Cold Weather Shelter program in Ellensburg.

Winters can be particularly harsh in Kittitas County. For those who are homeless during the winter months, a program exists to help keep them safe.

The Ellensburg Cold Weather Shelter program is a collaboration between six local churches. The program, which is beginning its fifth year, starts Nov. 12 and runs seven days a week until March. The host church on a given night opens their doors at 7 p.m. and ends services at 7 a.m.

“Each church was able to host it one night a week,” he said. “That’s what we’ve done for the last three years.”

Green said volunteers staff the program from both the host churches and other churches in the area, Central Washington University and various community members. Volunteers work one of three shifts during the opening hours. The first shift involves intake procedure, while the second shift is more supervisory during the evening. The final shift assists in getting shelter occupants ready and out the door by 7 a.m. Green said approximately 120 volunteers work to make the program successful. He said although the shelter begins wrapping up in February, weather tends to dictate when the actual closing is.

“We tend to run another nine to 10 days into March because the weather hasn’t warmed up enough yet to put folks out of the shelter yet,” he said.

Green said the goal of the shelter since it began is to provide a warm and safe place for people who are experiencing homelessness during cold winter months, because it’s not safe for them to be out in the weather.

“Especially if they are suffering from some type of mental health issue or substance abuse issue or something in their health is not good,” he said. “We’re trying to provide warm and safe shelter for them.”

Green said the program tends to host anywhere between 10 to 20 people a night. He said the program is changing this year by adding a nutritional element to its services. The program received county grant funding for the season that will help provide an evening meal and a breakfast for shelter occupants. Green said the grant funds also went to hiring a program coordinator who will oversee volunteer staffing and handle the usage of funds to purchase food and distribute it.

Green said the program is always looking for new volunteers. He said they begin getting the word out in October to educate potential volunteers about the training sessions for the program, which begin this weekend. The training outlines procedures and policies of the program and helps prepare volunteers for the responsibilities involved with shelter operations.

“Even as the shelter keeps going, we keep having some of these trainings as we hear that people want to continue to volunteer,” he said. “Maybe they didn’t get in on the trainings in October or early November. We are constantly looking for volunteers, and we create lists of folks who are interested so when we get training scheduled we can continue to let people know that there’s a training coming up. The need is always there.”

Volunteers for the program are comprised of both church and non-church members. They take on multiple roles during the program. A group of volunteers are trained to screen people arriving at the shelter for the night, ensuring that weapons, drugs and alcohol do not enter the shelter. Other volunteers help distribute sleeping bags, mats and food, interact with occupants and help connect them with available social services in the area.

Green said the atmosphere in the shelter is relatively benign for the most part. He said most guests enter the shelter, have a bite to eat and go to sleep. He said when problems do arise, they tend to involve alcohol. Although he said they closely monitor intoxicated individuals, intoxication alone does not disqualify an individual from using the shelter services.

“Behavior is what disqualifies someone from coming,” he said. “If the behavior becomes out of line, we do ask them to leave if it’s becoming to the point where it’s not safe.”

Green said that although the shelter’s goal is to provide a safe space for people to spend the night out of the cold, it is not meant to be crutch.

“We don’t give them beds and blankets and pillows, it’s not a comfy cozy thing,” he said. “They’re lying on mats that are about an inch thick on the floor in a sleeping bag. We’re not trying to create dependency here. We’re trying to keep them safe and maybe nourish them a little bit so that they can function better in society. The sooner that they don’t have to be in the shelter, they can get their life back together again and find a place to stay, the better.”

Rev. Jen Stuart, pastor of the United Methodist Church, said having a different church host every night can be a challenge for people, but she also sees the benefits.

"The strength of it to me is so many churches are working together," Stuart said. "It's a better way to do it because it creates so many connections. So many people now know the folks they see on the streets."

Stuart said there are people who have issues with mental health and drug addiction, but there are also people who just had some hard luck.

"A big part of it is the circumstances people find themselves in," she said.

She said the shelter fits in with the mission of all the churches and it has had an impact.

"We've had so many success stories," Stuart said referring to people who have been able to find homes.

Those interested in volunteering at the cold weather shelter must attend one of the training sessions. Upcoming training dates are: