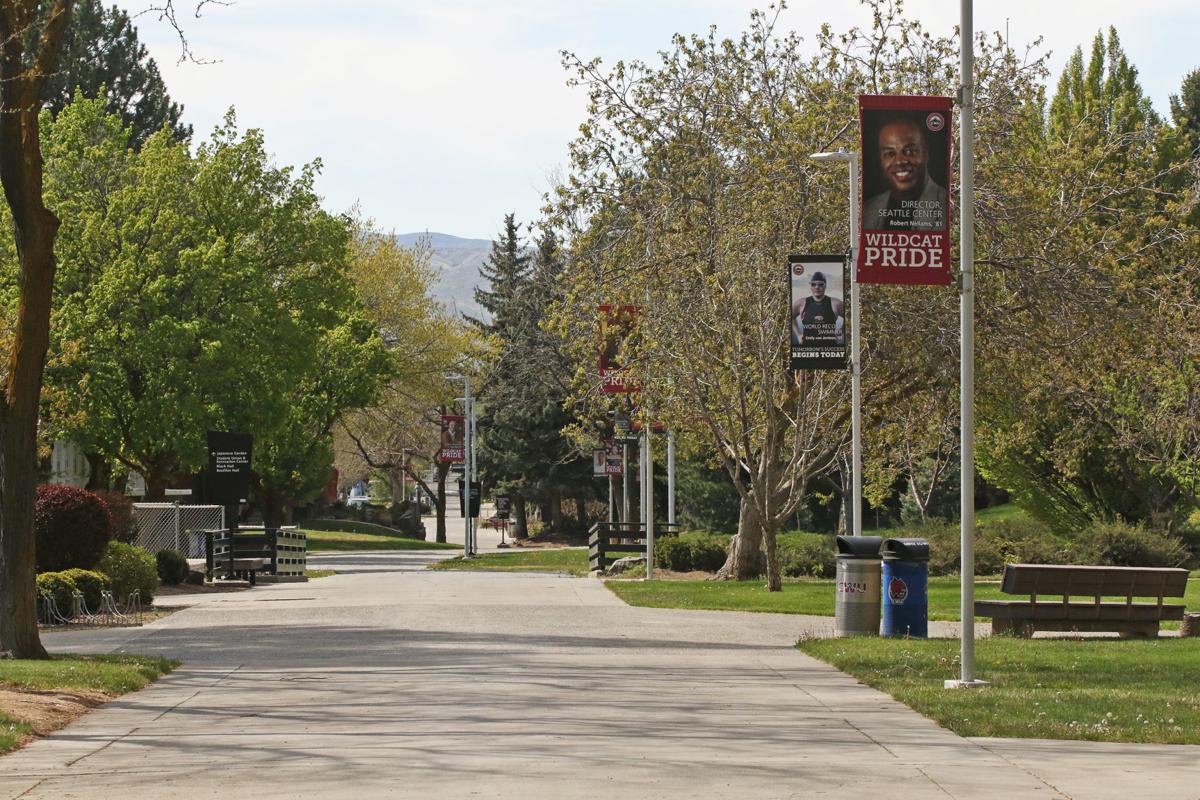 Central Washington University’s campus has been largely vacant this spring. What it looks like this fall remains in question.

Central Washington University’s campus has been largely vacant this spring. What it looks like this fall remains in question.

While an unconventional spring term is almost over at Central Washington University, the looming question of what campus will look like come September is coming into clearer view.

Central Washington University president Jim Gaudino updated the board of trustees on the COVID-19 situation during its regular meeting on Friday, recommending the university adjust now to its new budget reality, with a reduction in force starting this summer.

To avoid layoffs, he recommended cyclic leave — meaning full-time staff would be reduced to part time — and other staff would be furloughed, with the idea that they could return at the end of an assigned period. Affected staff would be encouraged to take maximum use of federal unemployment options recently passed in Congress.

Gaudino said summer session will be moved completely online, since around 80 percent of summer session is already taught online. Spending restrictions would be extended through the summer, including the hiring freeze, purchasing freeze and the travel ban. There would be no programming, no dining or activities, and employees would work at home if possible. The only housing on campus during summer would be student apartments, which are equipped with cooking equipment and are not cleaned by campus staff.

During his presentation, Gaudino discussed three different scenarios under which the school could operate, and how his administration is preparing to execute those plans.

The three scenarios he discussed were:

Normal — Students are invited to return with some sense of normality when it comes to campus activities. Curriculum would be 80% taught in classrooms, with 20% online or similar to how it was taught spring quarter. Only essential workers would be on campus, and COVID-19 mitigation would be high, including social distancing, masking, barriers and regular cleaning. This plan would have a financial loss of around $12 million.

Hybrid — A reduced occupancy in the residence halls, rather than a full load of 4,000 students. Restrictions in dining, limited student programing and a 50-50 split in instruction for online and in person. Only essential workers would be on campus, with those who could work from home doing so. COVID-19 mitigation would be high. This plan would have a financial loss of around $17 million.

Online — Campus would be completely closed, and unlike this term which was closed while students were at home on spring break, there would be no activity in residence halls or dining facilities. Classroom instruction would be 95% online, with only necessary labs being performed face to face. All campus activities would be virtual, with no in person programming or club activities. This plan would have a financial loss of around $27 million.

When creating the plans, assumptions were made that there would be a 2.5% tuition increase, a 15% state support decline over three years, and that this would be a one-term disruption, going back to a more normal winter and spring afterward.

Guadino favored the hybrid approach and said planning is already well underway, but acknowledged there are a lot of logistical hurdles to clear. He stressed this is a fluid situation, which could be upgraded to “Normal” or downgraded to “online” depending on the information at the time.

Some logistical hurdles include how to protect in-person teaching faculty and staff, and even simple things like how to dismiss a socially distant class one at a time from a large classroom into a small hallway.

Gaudino said there are 110 campus unit plans following his template for the hybrid scenario which have been submitted for review, which will be compiled into a preliminary university plan by May 31.

Gaudino also stressed the need for the university to look at this through the lens of a three or four year window, not just trying to make it to January. He recommended dipping into the university reserves to prevent and reduce long-term damage to the university and its reputation.