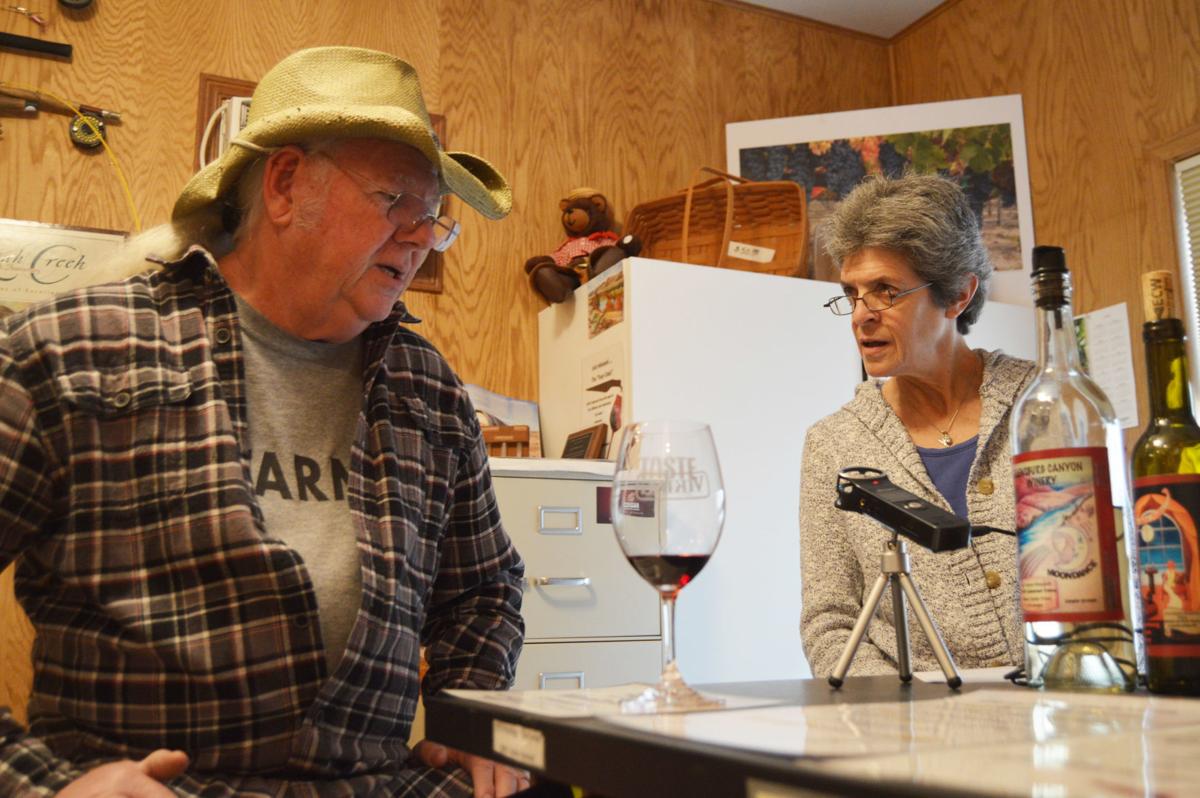 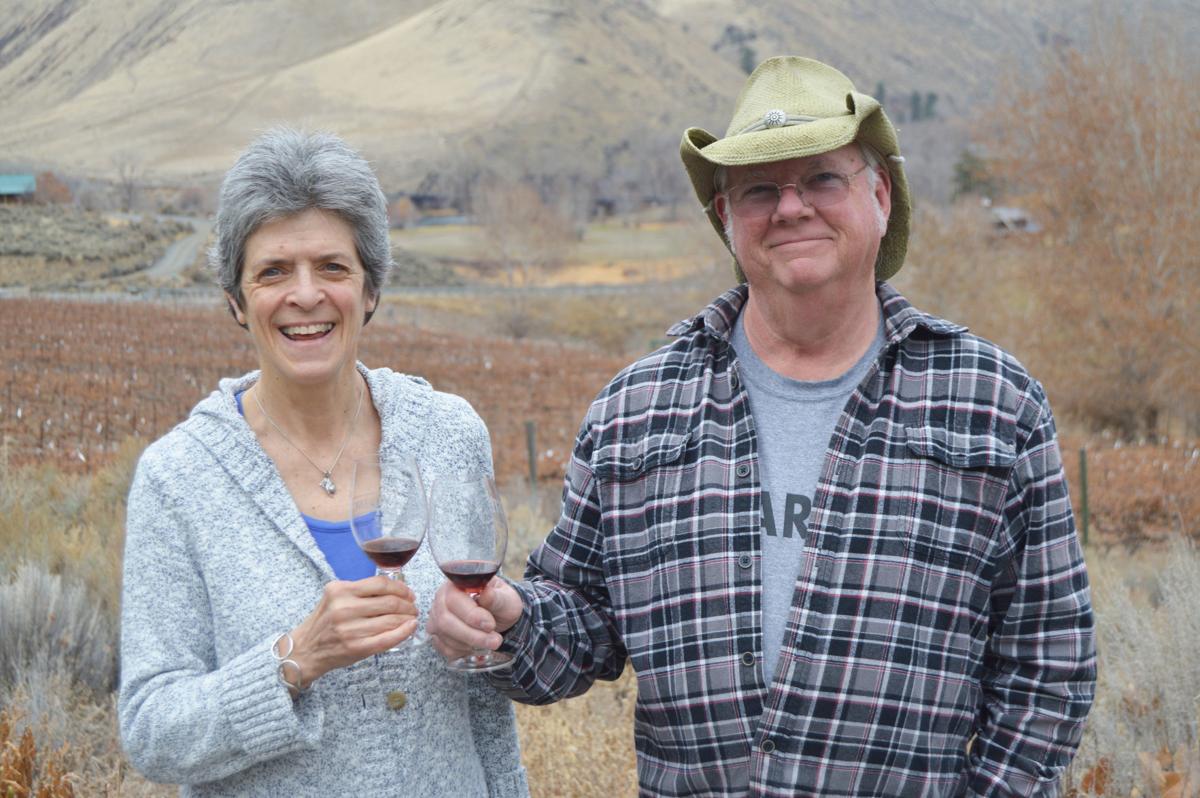 Lines on Wines host Marji Morgan celebrates a toast with Ellensburg Canyon Winery owner Gary Cox after recording an episode of her podcast. The show recently celebrated its 100th episode. 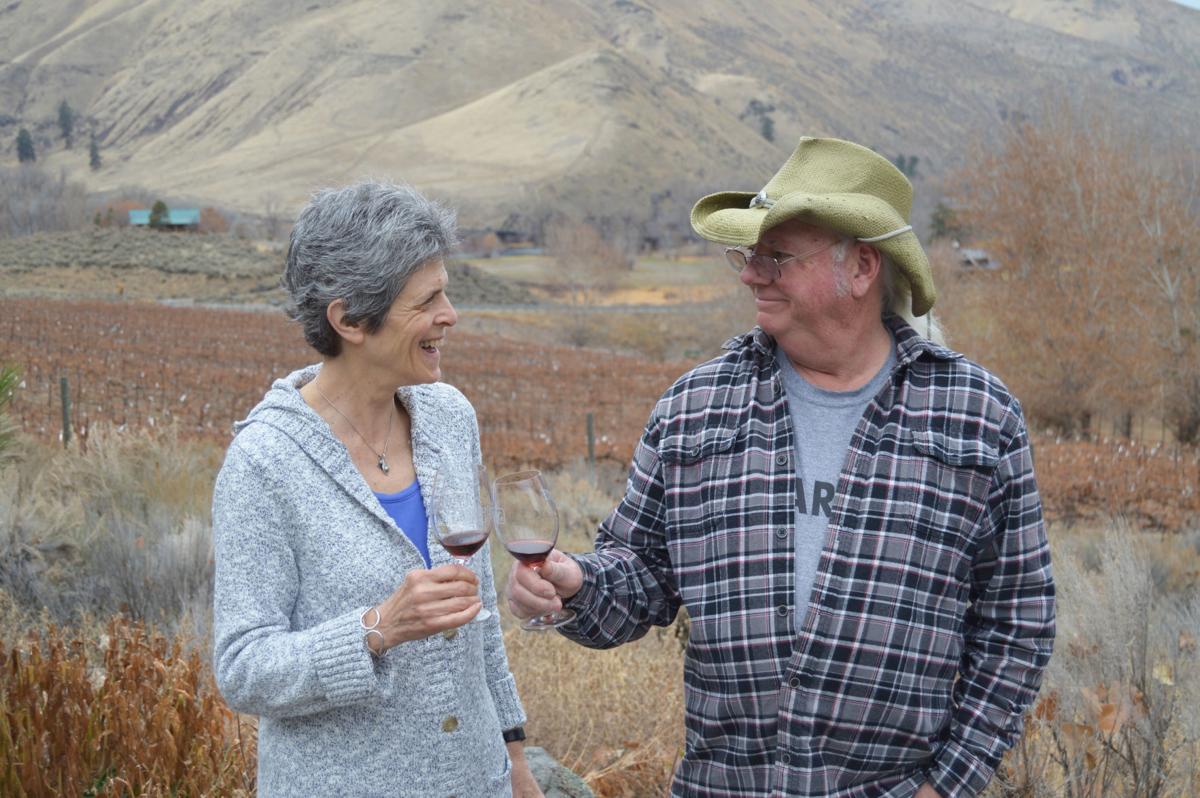 Lines on Wines host Marji Morgan celebrates a toast with Ellensburg Canyon Winery owner Gary Cox after recording an episode of her podcast. The show recently celebrated their 100th episode. 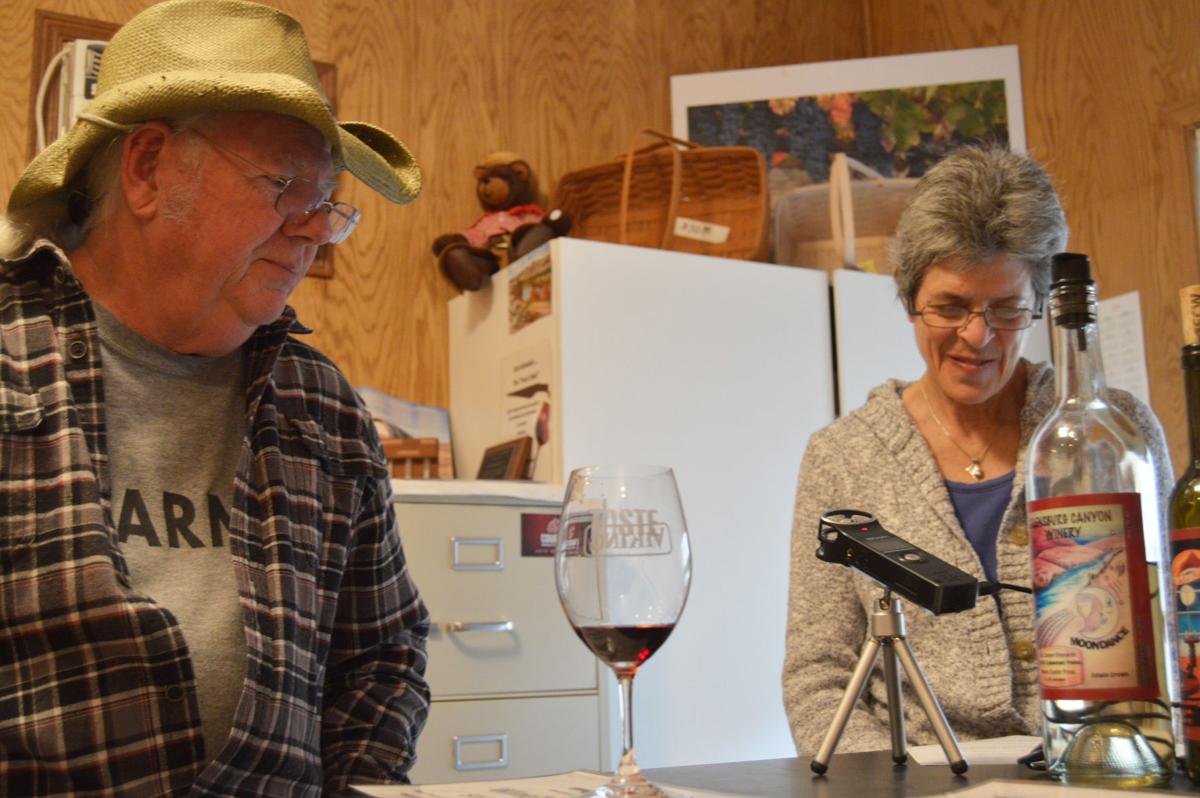 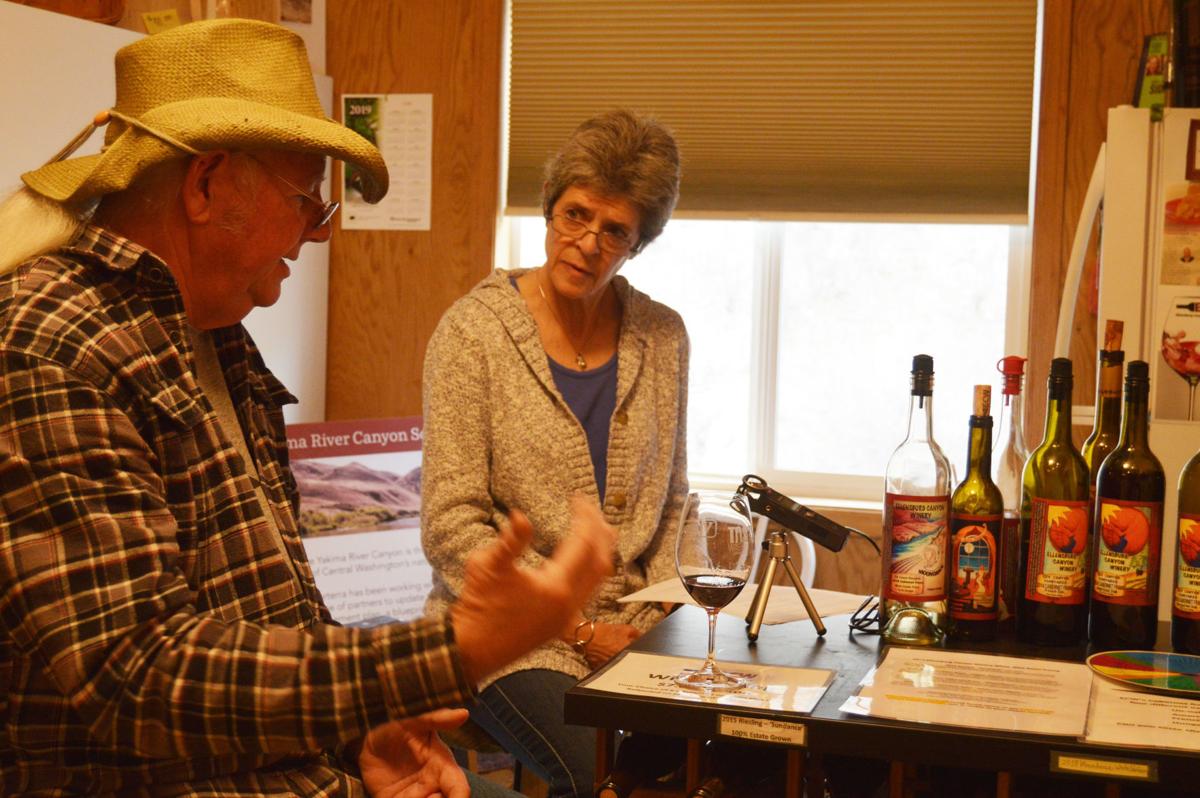 Lines on Wines host Marji Morgan celebrates a toast with Ellensburg Canyon Winery owner Gary Cox after recording an episode of her podcast. The show recently celebrated its 100th episode.

Lines on Wines host Marji Morgan celebrates a toast with Ellensburg Canyon Winery owner Gary Cox after recording an episode of her podcast. The show recently celebrated their 100th episode.

On a chilly Tuesday morning, Marji Morgan sat down with Ellensburg Canyon Winery owner Gary Cox, but the drink of the morning wasn’t coffee.

Morgan produced a 2007 vintage Port-style Cabernet Franc from ECW and proceeded to pour them both a glass.

“I must have had this in my collection since we first met,” she said.

Morgan set up her recorder, and both contemplated the vintage wine as they began to chat on her podcast titled Lines on Wines. During their interview, Cox talked about the path that took him to the Yakima River canyon, the trials and tribulations he’s had with growing different varietals on the property and what sets the canyon apart in terroir from other regions within the state.

This specific podcast was symbolic for Morgan, as it marked her 100th episode. Morgan, who is a professor in the history department at Central Washington University, has been producing the podcast for Ellensburg Community Radio since 2015. The episode was further symbolic in that her first episode was also with Cox.

Prior to living in Ellensburg, Morgan lived in Illinois, teaching history at Southern Illinois University Carbondale. She became dean of that department in 2000. In 2005, Morgan decided to begin applying for dean positions at other universities.

“I also knew where I was coming wine-wise,” she said. “I had choices of where I could go, and I made lists of pros and cons. I decided on Central Washington University. I liked what I saw there, the faculty and the emphasis on teaching, but I also loved the Washington wines I had had. I came here with Washington wine in my cellar.”

When Morgan moved to Illinois, she said she knew nothing about wine at that point. Once she became acquainted with the other professors in the history department, she quickly began to realize they shared collective passions.

Morgan made it her mission to become more educated on the world of wine at that point. She struck up a relationship with her local wine shop and began to attend tastings. Her transformative moment was when she went to a Chardonnay tasting at the wine shop.

“There were six Chardonnays there and I remember thinking to myself, if you’ve tasted one Chardonnay, haven’t you tasted all Chardonnay,” she remembers. “That was the moment for me that turned me into a wine person, because each was a different wine. I didn’t know why, I didn’t understand, and I said, ‘This was it.’”

As her passion took root, Morgan became active in multiple wine clubs while in Carbondale. Her first introduction to Washington wine came from a member of one of those clubs who happened to grow up in Walla Walla. Around the same time, she went to a wine exposition where she came across a table that showcased Washington wines.

“There was this Washington wine there,” she said. “I tasted this wine and thought this is the best wine here. There were 200 wines at this exposition from all over the world and I thought to myself that it was the best wine there.”

Morgan picked up a bottle of the wine and it still has it in her cellar to this day. By the time she arrived in Ellensburg, she had tasted many other wines the state has to offer giving her a framework to pursue her passion while on the ground in Washington.

Morgan served as Dean of the College of Arts and Humanities at Central Washington from 2005 to 2014. While in that position, she hosted a television talk show focusing on her college.

“I was used to doing half-hour interviews,” she said. “For those, I was interviewing students, faculty and alumni so I could highlight things about the College of Arts and Humanities.”

After she stepped down as dean, Morgan began looking for an avenue to further explore her passion for wine. In the fall of 2014, she learned that Ellensburg Community Radio was getting up and running. They were looking for people to produce shows to air on the station, and Morgan thought it would be a great fit.

“I thought that someday I might write a book on the history of the industry and this would be part of my research,” she said. “I would get to help people tell their stories. It was just perfect timing.”

Morgan’s first show was in January 2015. She chose Ellensburg Canyon Winery because she felt it would be a proper start to focus on a local product.

“I’ve known Gary ever since I’ve been here, so I thought I should start with something I knew a little bit about, and also to highlight our local vineyards,” she said.

Over the next 98 episodes of her podcast, Morgan travelled to every wine region throughout the state, including vineyards on the West Side. She never conducts her podcasts at the radio station, electing to take her recorder to the winemakers and the regions she focuses on.

“I believe if you are truly interested in wine, you have to stand in those vineyards and see and taste those grapes,” she said. “For me, you have to see where those wines come from. It makes the experience so much richer. You have the ability to understand the complexity of that wine in your glass.”

Just as her podcast has developed over the years, Morgan said Ellensburg Community Radio has followed the same trajectory. The station is run completely by volunteers, and Morgan said they all share a common bond.

Morgan has seen the station grow from a handful of contributors to boasting over 20 shows on a range of subjects. The station has continued to develop their website and recently debuted an app that allows listeners to stream the stations shows from anywhere in the world.

As she has developed her podcast over the years, Morgan has found that her passions for wine and history directly overlap. As a historian, she said her job is to learn about and tell people’s stories.

“Wine is a living thing that is constantly changing from the time the grapes grow in the vineyard to the time you put that wine in your mouth,” she said. “From the front of your mouth to the back and as you swallow, it changes. It’s always changing.”

Morgan also made the connection between a glass of wine and her experience as dean at CWU. She said the disciplines studied within arts and humanities have a distinct connection to the wine in the glass.

“Those disciplines and more emerge when you pop a cork in a bottle of wine,” she said. “It’s about science, it’s about tourism, its’ about art, it’s about philosophy, it’s about poetry, it’s about aesthetics, it’s history. All those elements are part of wine for me. It’s an interdisciplinary tour de force.”

As she looks toward the future, Morgan said she is diversifying her topics on the show beyond winery owners and winemaker. She has begun to include talks with grape growers, researchers and shop owners. As the industry continues to develop, Morgan said that subjects will include new growing areas as well as the continued changes that happen in the world of wine, all of which give her an infinite amount of content for the next 100 podcasts.

“What’s surprised me is that every time I do a show, there’s a slightly different twist on what people are doing with their wines,” she said. “Either in the winemaking, the grape growing, the artistic packaging, the meaning they invest in their wines, there’s a slightly different twist. There’s a different thing I can educate people about. People are pushing boundaries in lots of ways, and that makes the show endlessly fascinating. I never feel like I run out of things to talk about.”