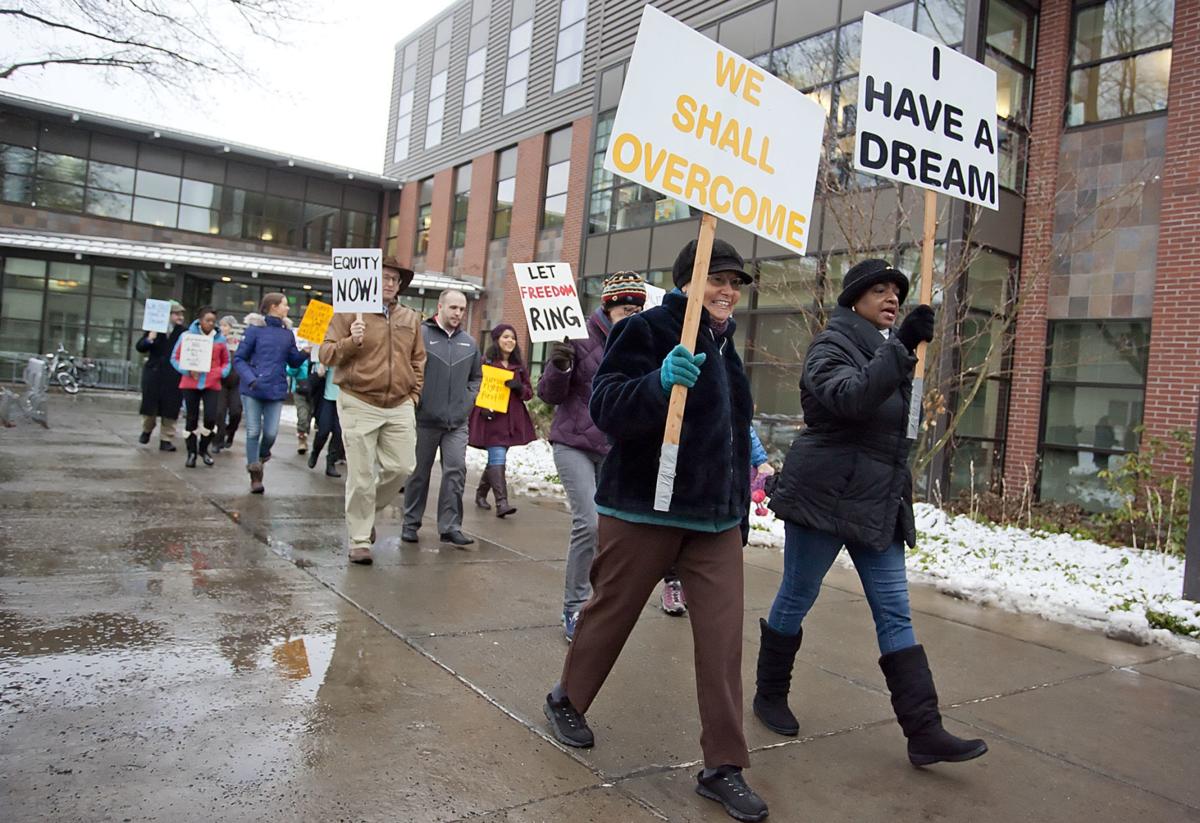 Participants head out from the Student Union and Recreation Center at the start of a memorial march through the CWU campus in honor of Dr. Martin Luther King Jr., Thursday. 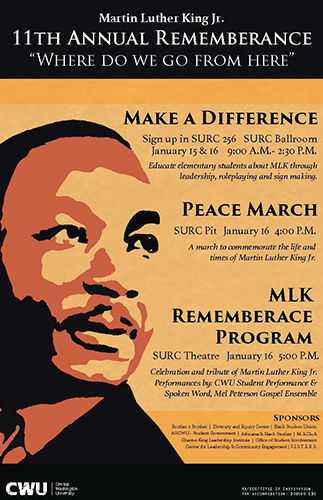 Participants head out from the Student Union and Recreation Center at the start of a memorial march through the CWU campus in honor of Dr. Martin Luther King Jr., Thursday.

Central Washington University students and staff will mark the silver anniversary of the national Martin Luther King Jr. (MLK) Day of Service on Jan. 20 with the 11th annual companion Make A Difference events on Wednesday and Thursday, Jan. 15 and 16

MLK Day is the only federal holiday designated as a national day of service to encourage all Americans to participate in volunteer activities that improve their communities as a way to honor the work of Dr. Martin Luther King Jr.

“It has continued to maintain momentum over the years because it’s primarily a student-facilitated program conveying their appreciation for Dr. King, his life’s work and mission, and how they’re carrying it forward,” said Andre Dickerson, director of CWU’s Center for Leadership and Community Engagement (CLCE), who has been involved in all of the previous events dating back to when he was a CWU student. “As it’s grown, more departments have become involved and it’s now a signature program of the university.”

This year’s events will include having all second- through fifth-grade students from Ellensburg’s Mount Stuart Elementary School come to CWU to participate in a variety of activities, crafts, presentations, and workshops promoting diversity and inclusion as well as sharing with the students information about King’s legacy.

“They (the elementary students) have some understanding of who he was, which is awesome,” Dickerson said. “It speaks volumes to the curriculum they’re being exposed to at the elementary level in terms of these important historical figures. We try to dive a little deeper and help them gain some context to make Dr. King even more relevant to their actual lives.”

A peace march on campus is also planned for Thursday. It will begin with a poster-making opportunity in the Student Union and Recreation Center (SURC) Pit at 4 p.m., to develop placards and signs to be carried from the SURC Pit during the rally, which begins at 4:30 p.m.

At 5:30 p.m. Thursday, a student-directed MLK program will take place in the SURC Theatre. It will include choral music and spoken-word reflections on the theme of “Where do we go from here?”

“It (the theme) comes from Dr. King’s 1967 book and speech, which was titled ‘Where Do We Go from Here: Chaos or Community?’” said Abby Chien, director, CWU Diversity and Equity Center (DEC). “In the book, Dr. King writes about how the passage of the Civil Rights Act is progress, but not enough. There’s so much more work to be done.”

During the program, participants will have opportunities to express what King’s work and legacy means to them today, and their assessment of the current state of civil, human, and social rights in the United States.

“This year, students really want to speak to their interpretation,” Chien said. “One thing that has been highlighted in conversations with students and the (organizing) committee is that Martin Luther King was controversial in his time. But we often idealize him in a particular way. The students want to make sure they’re adding nuance to the way we understand his legacy and his work.”

Along with the CWU events, Dickerson and several CWU students have been invited to participate in Ellensburg High School’s Martin Luther King assembly on Jan. 16.

“We have also invited the high school to come and attend our evening event as well,” Dickerson said.

For additional information about the CWU events, contact the CLCE at 509-963-1850 or by e-mail at clce@cwu.edu.

CWU is a 2019 recipient of the INSIGHT Into Diversity Higher Education Excellence in Diversity (HEED) Award. It is the fifth time in six years that Central received national recognition from the publication for its inclusivity efforts. CWU is the only institution in Washington State with that record of achievement.