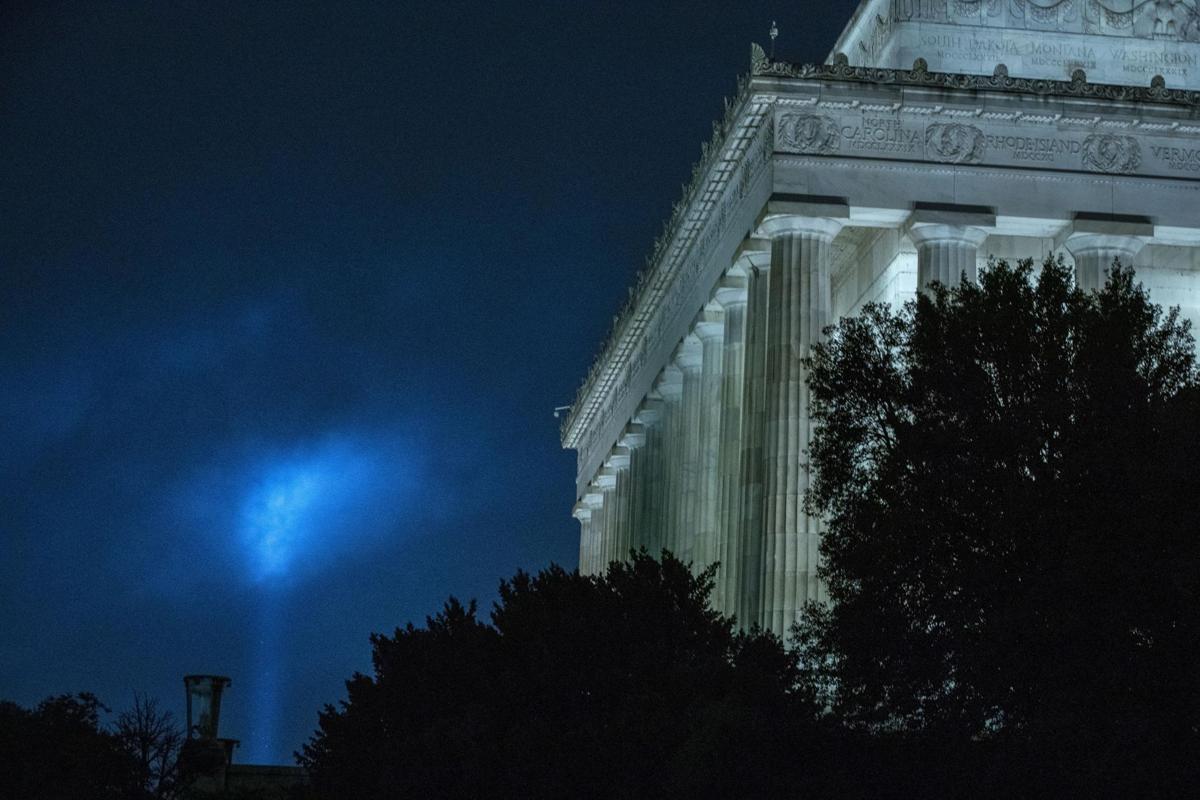 A beam of light is seen Wednesday near the Lincoln Memorial as part of the Towers of Light Tribute marking the 19th anniversary of the 9/11 attack on the Pentagon in Washington, D.C. 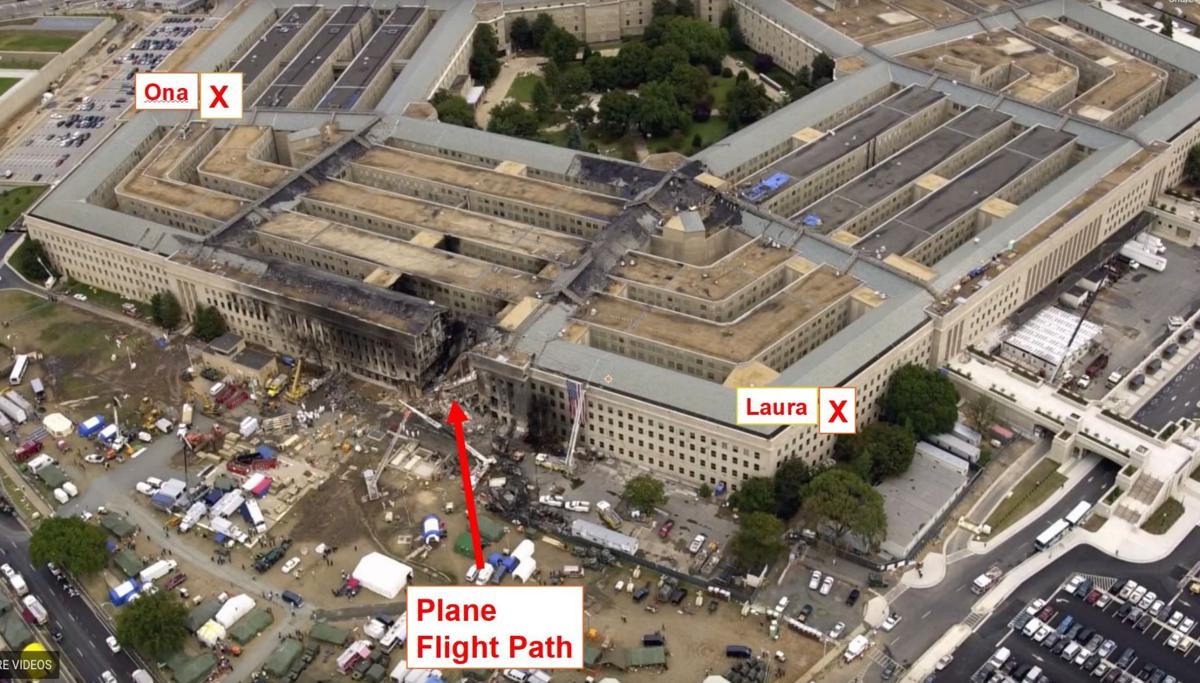 This aerial photo shows the location of Ona Solberg and Laura Stanley during the attack on the Pentagon on Sept. 11, 2001. 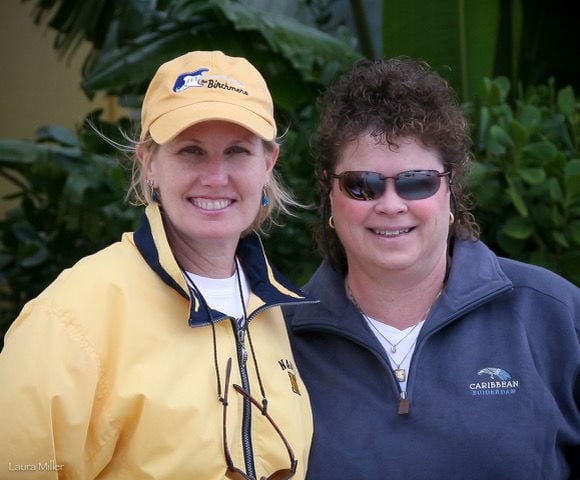 A beam of light is seen Wednesday near the Lincoln Memorial as part of the Towers of Light Tribute marking the 19th anniversary of the 9/11 attack on the Pentagon in Washington, D.C.

This aerial photo shows the location of Ona Solberg and Laura Stanley during the attack on the Pentagon on Sept. 11, 2001.

The sound is what she remembers most.

The loud explosive blast ripping through the symbol of American war power when al Qaeda terrorists aboard Flight 77 crashed into the western façade of the Pentagon in Arlington, Va., killing 59 aboard the plane and 125 military and civilian personnel inside the building.

She was a mere 300 yards from the location of that striking point that changed the course of American history forever.

In the midst of the COVID-19 pandemic, racial dissension and protesting in the streets in cities across the country. America approaches the 19th anniversary of the 9/11 attacks. Many cities and organizations plan remembrance ceremonies. But for those who were there, it remains excruciatingly difficult to look back.

There are three women currently living in Ellensburg who were there that  day al Qaeda terrorists attacked the Pentagon in Arlington County, Va.

Solberg lives on the Edgemont Loop just off of Tozer Road. Laura Stanley, was a Senior Government Civilian Employee GG-15, assigned to Director of Naval Intelligence Staff as Senior Security Policy Advisor (2000-2014). And, Ramona Swann, currently lives on Third Avenue, was working in downtown Washington D.C., just across the Potomac River from the Pentagon.

“I would say I was about 300 yards from the blast. Laura was actually a little closer,” Solberg said. “Our admiral who we were working for had just moved office into the new part of the Wedge where we were. Laura had actually gone up to his office to talk to his deputy.

“I was in our working space. So, when the plane hit, it was right in between us that day. Where it hit was in some of our most sensitive intel spaces. It hit our 24-hour intel watch. That’s where we lost seven friends and co-workers that day.”

Swann, whose daughter Monica Miller is the executive director of the Gallery One Visual Arts Center, said the experience remains extremely difficult to talk about. She had gotten word that American Airlines Flight 11 had crashed into floors 93-99 of the North Tower of the World Trade Center and United Airlines Flight 175 into floors 75-85 of the WTC’s South Tower, killing everyone on board and hundreds inside the building just after 9 a.m.

By 9:37 a.m., hijackers aboard American Airlines Flight 77 crashed the plane into the western side of the Pentagon, which led to a partial collapse of the building’s west side. With the emergency vehicles, military personnel, helicopters, lack of cell phone service, it was surreal, she said.

At 10:03 a.m., a fourth plane crashed into a field in Stonycreek Township, Pennsylvania.

DIFFICULT TO TALK ABOUT

“It’s still extremely hard to talk about,” her voice cracking as she replayed that day in her recall. “We knew the Twin Towers had been hit, but I didn’t see the plane hit the Pentagon. It was surreal to see the smoke and flames from across the river. It was very apparent that something was very wrong.

As bad as it was, Solberg said, the attack on the Pentagon was. It could have been worse.

“It’s hard to say if they knew where they wanted to strike. I do know when they realized where the Pentagon was, they were too high,” said Solberg, who was two months away from leaving for her next assignment to a Naval Intelligence post in Suitland, Maryland before retiring.

“They did a loop to lose 2,000 feet of altitude to come in at a different angle. They hit right were a helipad site was. It might be because they thought the helipad site would house some of the more important people. Where they actually hit — it saved us — because if they had hit any other side of the building, we would have lost the whole Pentagon.”

The feelings differ as to the anniversary — remember lest not forget. Or, move on and not look back.

“I was so angry for so long,” said Swann, who grew up in Chewalah. “I try not to think about it. It was a real blow to everything we know. I think we take everything for granted. It’s made me rethink that having a job and a title in a downtown office doesn’t mean anything.”

Solberg said she believes she received Stage 4 cancer as a result of being exposed to the toxic environment of the building after the explosions.

“The terrorists are still killing us, you know?” she said. “There’s a lot of people, the FBI agents and everyone else, that have died from cancer for just being there. They survive the plane and die from being around the toxic waste inside the building.

“I was told without treatment they’d give me a year to live and with treatment it would be three. But I’ve already been four years. I’m still hanging around.”

As for Friday’s 19th anniversary, she and Stanley just unplug for the day within their private thoughts.

“We remember our friends and what we did that day so we don’t forget,” she said. “We want people to understand what happened .”