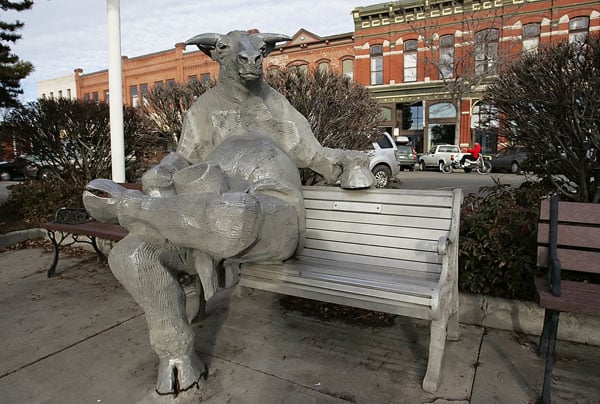 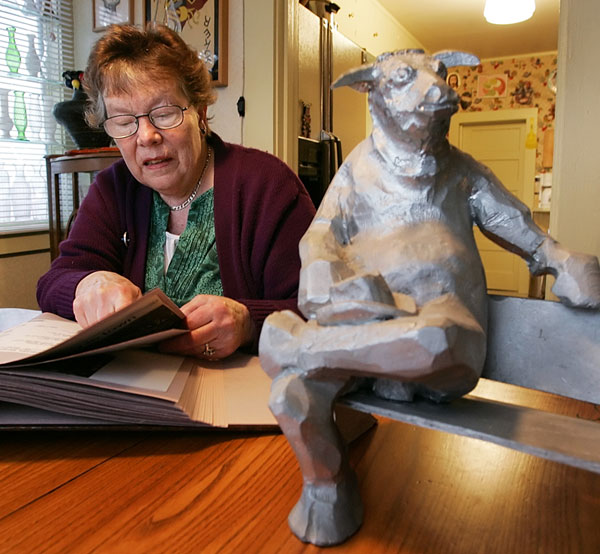 Jane Orleman talks about the effort that she, her late husband, Dick Elliott, and a handful of Ellensburg citizens put forth in the mid-1980s to bring the now-famous bull statue to Rotary Pavilion. 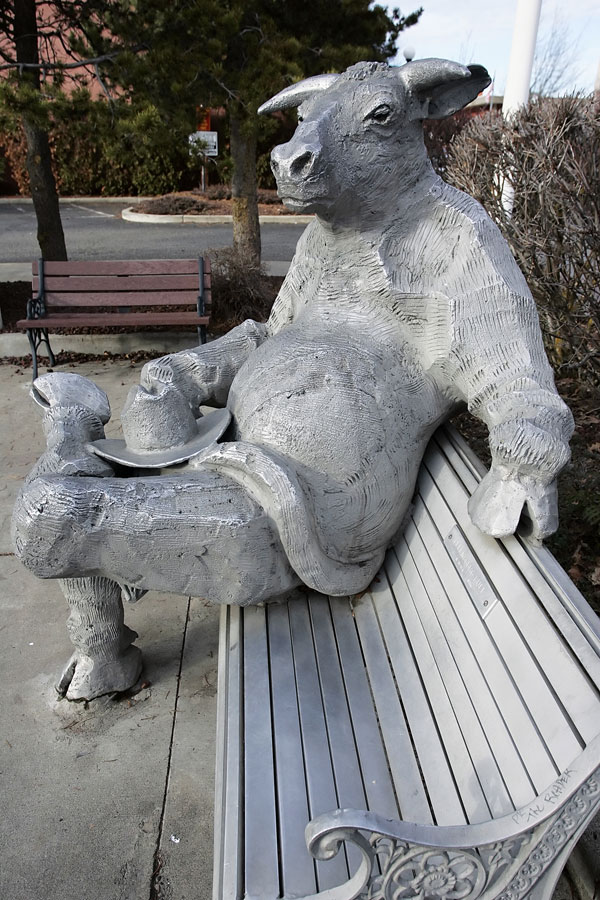 “The Bull” at Rotary Pavilion is listed on numerous Web sites as a top destination for photo-op-seeking roadtrippers.
1 of 3

Jane Orleman talks about the effort that she, her late husband, Dick Elliott, and a handful of Ellensburg citizens put forth in the mid-1980s to bring the now-famous bull statue to Rotary Pavilion.

ELLENSBURG — Ellensburg was looking for a cowboy. What it got was a boy cow.

Sitting serenely with his hat in his lap, the bull in Ellensburg's Rotary Pavilion has become a mainstay among quirky landmark lists both printed and on the Web. Before he was a photo-op favorite, however, he inspired a lively (and good-natured) debate among Ellensburg denizens.

Dick Elliott was behind it, really. In 1984, following a lunch across from the "Waiting for the Interurban" statue in Seattle's Fremont neighborhood, Elliott decided Ellensburg needed its own iconic statue.

"I think he brought (the idea of a statue at the Rotary Pavilion) up at least half a dozen times," said Jane Orleman, wife of the late Elliott. "Until finally, the downtown task force told him to get a hold of the guy. That was the beginning of it."

The guy was Rich Beyer, whose statues populate parks and waterfronts throughout the Northwest. Elliott got a hold of him, and the artist quickly agreed to take up the task. The original commission was called "The Cowboy," and was intended to honor the city's Western heritage.

"We mentioned that Ellensburg, being a Western town, would like, as much as anything, a cowboy sitting on a bench," said Orleman. "Rich decided he would rather do a cow, boy, you know, a bull.

What's in a name?

As Beyer developed his piece, it became clear that some of Ellensburg's population did not have a problem telling him how to do his art ... and what to call it.

According to the book, "The Art People Love," written by Beyer's late wife, Susan, the statue was approved by the Ellensburg Art Commission on Sept. 25, 1984. At the time the model was named "Cowboy."

"Rich said it was to honor the cattle industry in the area," writes Margaret Beyer. "But some cattle ranchers were offended by the title, and felt put down by the use of the word cowboy."

"We told Rich early on that he'd be better off changing the name," said Orleman.

Margaret Beyer writes that her husband was "shocked that so many people were offended" and that "he gladly changed the name to ‘The Bull.' "

Well, as any self-respecting Western man or woman will tell you, there are certain ... er ... parts, that make a bull a bull, rather than, say, a steer.

And Beyer, surely not wanting to again offend a population familiar with bovine, made sure his statue had it right. Well, that raised yet another issue.

The truth comes out

"I think, more than anything, what people had a problem with was the anatomical correctness of the bull," said Brad Fitterer, who was serving on the Ellensburg Rodeo Board when the bull was introduced to the town via a life-size Styrofoam model put on display at Rotary Pavilion.

Writes Margaret Beyer: "When the name was changed, the underlying reason why people were personally offended by ‘The Bull' finally broke out into the open ... Grandmothers protested that they could not take their grandchildren near the bull for fear of rude anatomical indoctrination."

Throughout 1984-'86 - while the styrofoam bull made regular appearances in support of its cast-aluminum doppelganger - the pages of the Daily Record filled with public commentary on the piece.

A scrapbook Orleman kept throughout the process contains dozens of printed references to "The Bull" - including nearly 80 letters to the editor split almost evenly among supporters and detractors.

Indeed, the statue's not-so-private parts are cited often among letters opposing "The Bull."

Also included among the letters, and a handful of columns and features, were several opinions, both pro and con, spelled out in verse.

"I always enjoyed that people would be opposed to the bull, but their emotion would inspire them to write poetry about their opposition," said Orleman.

The path to the pavilion

Amid the debate, a dedicated group strove to ensure that, should the task force approve the bull, it would be able to pay for it.

"It took us two years to, I swear, raise the money dollar by dollar," said Orleman. "We had the Styrofoam bull at that point, and we took it everywhere. We took it to fairs, auctions, yard sales, the Upper County, you name it, and people would pay $3 for a picture with the bull."

Orleman, along with Elliott and a handful of other community leaders, served on The Committee for the Bull, which worked tirelessly to raise the $12,500 to pay Beyer's commission fee. There was little the committee - which wore buttons proclaiming "I'm Bullish on Ellensburg" - wouldn't do to earn a dollar for the bull, including selling $3 bags of cow manure.

In the end, the group's efforts paid off, and "The Bull," cast out of aluminum, was installed on Dec. 20, 1986, more than two years after the initial approval.

"If there hadn't been all this fervor, we probably never would've got this done," said Orleman.

Once "The Bull" was in place, however, the fervor, quickly turned positive.

"It may have been viewed as a potshot at the rodeo (at first)," said Fitterer. "But in the years since, that's obviously proven untrue. Once the bull was installed, the Rodeo Board quickly embraced it."

As did the town.

"Once the bull went in, many people who had been vocally opposed to it, stopped us and told us how much they loved it," said Orleman.