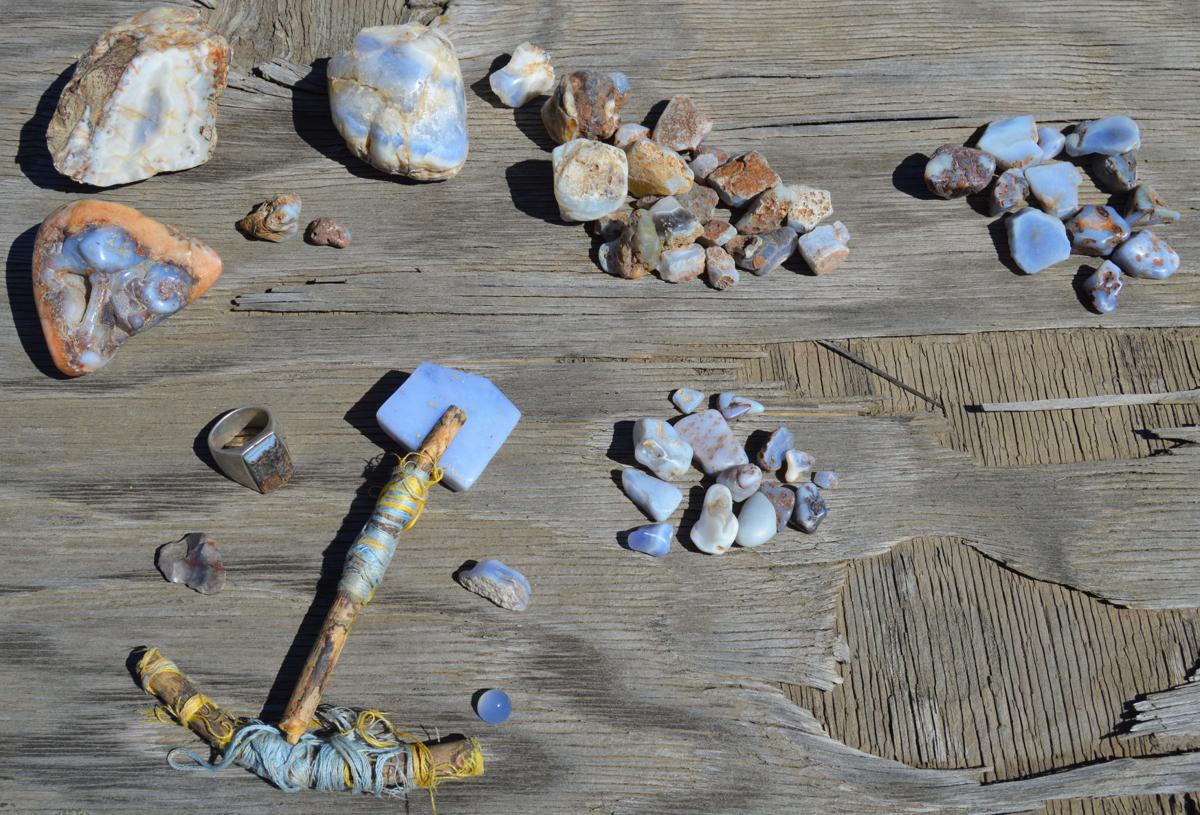 Ellensburg blue agates, seen displayed at the Rock’ N’ Tomahawk Ranch, are in consideration to be name the State Gemstone. 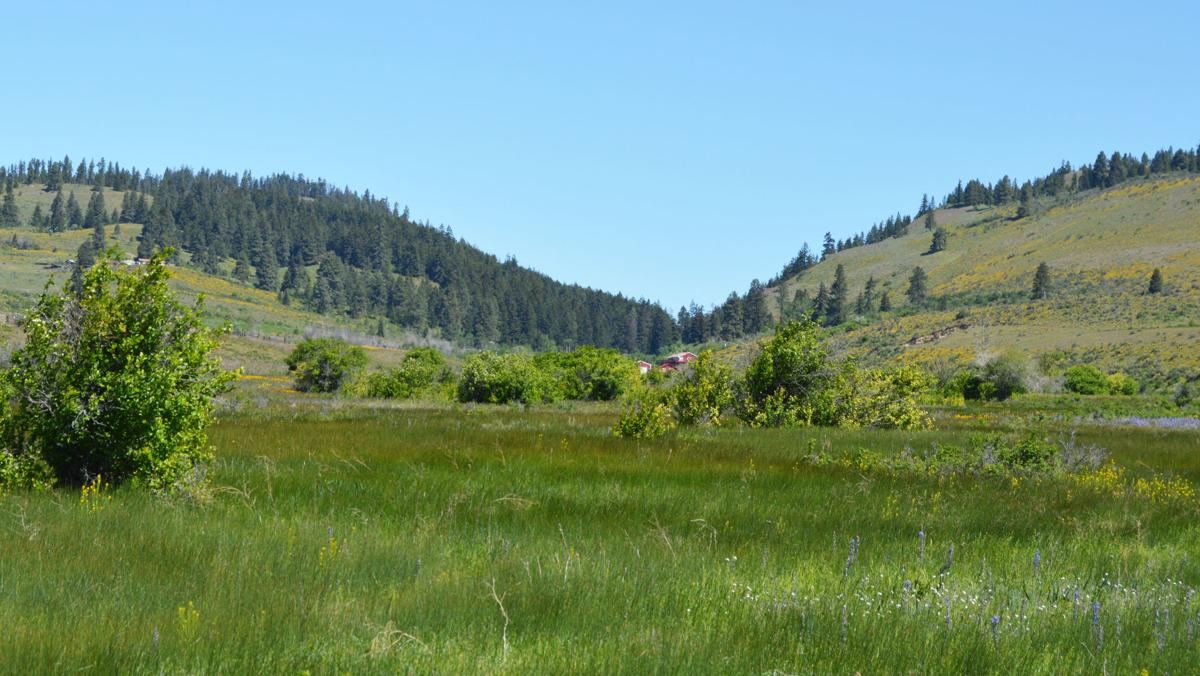 Green Canyon, one of the suspected source of the Ellensburg Blue Agate. 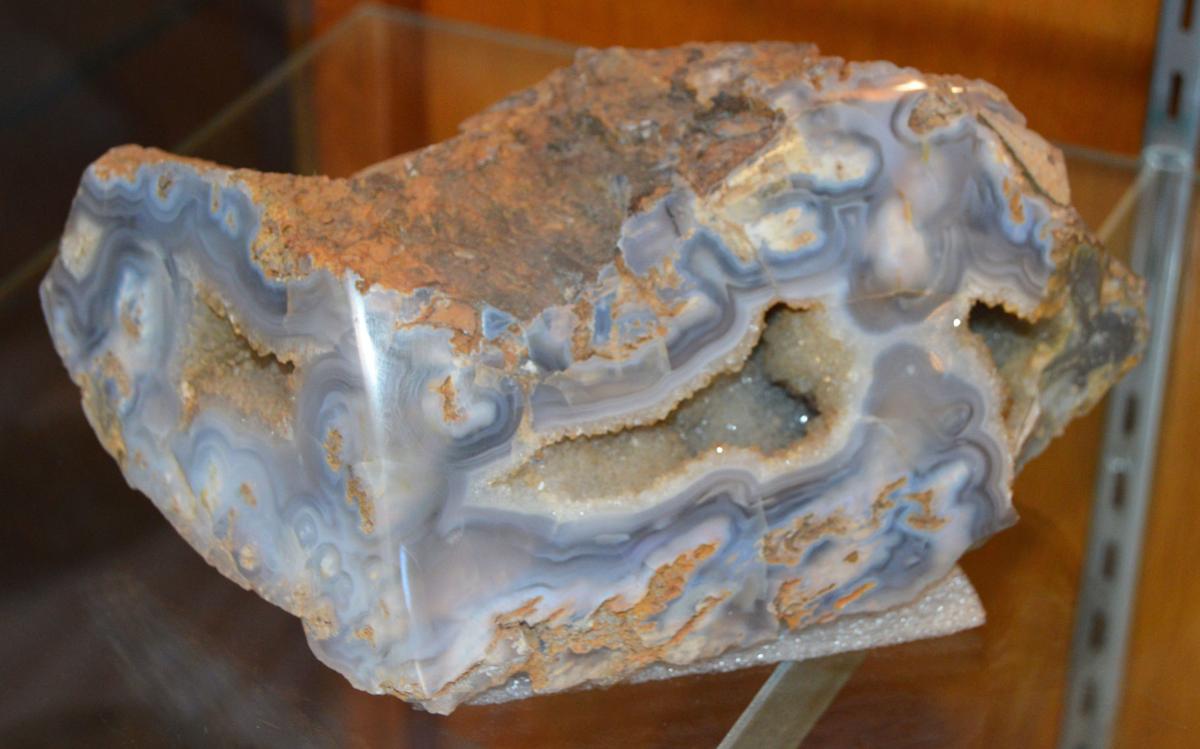 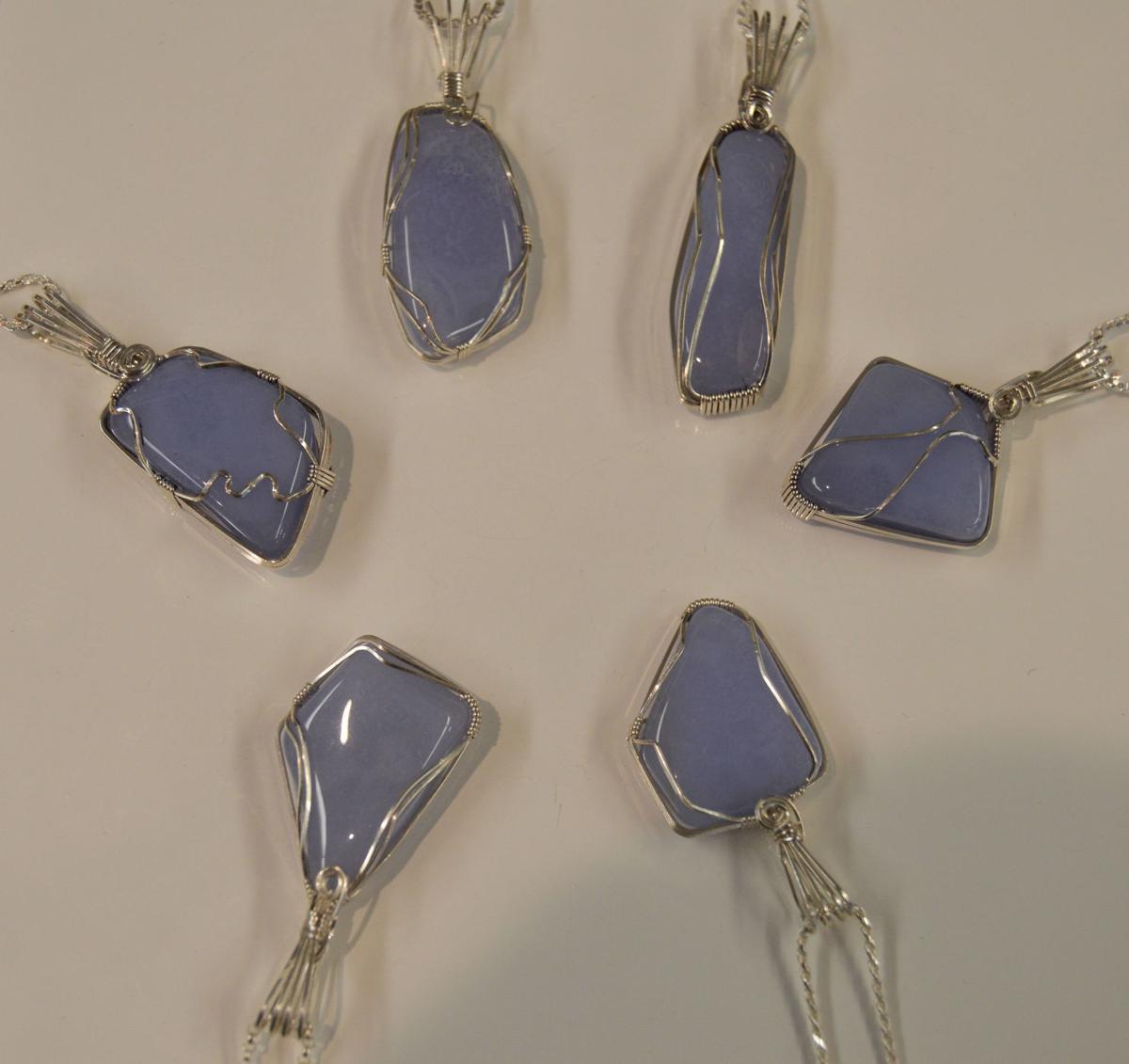 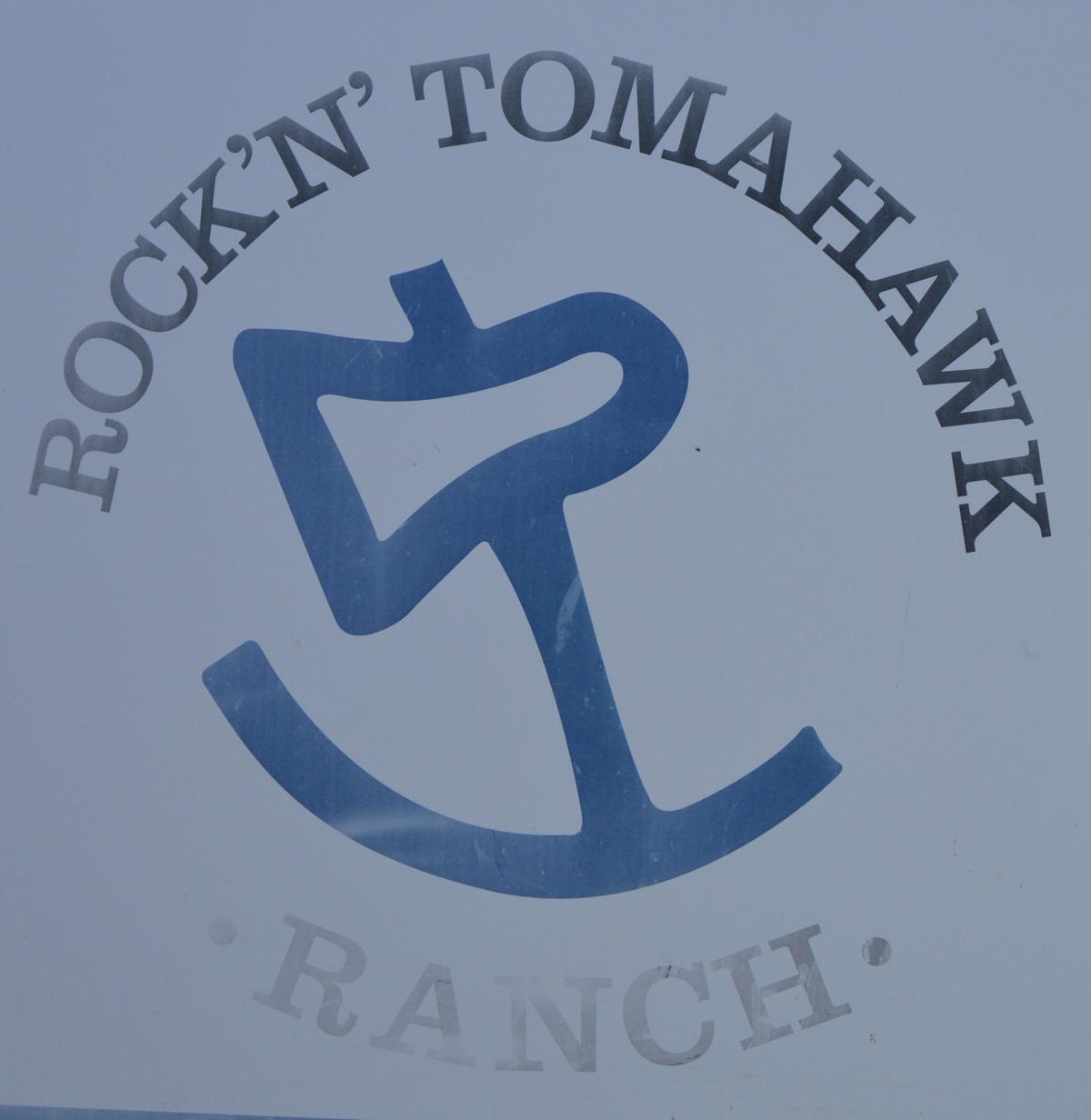 The sign for the Rock' N' Tomahawk Ranch tells rock hunters they are in the right place.

Ellensburg blue agates, seen displayed at the Rock’ N’ Tomahawk Ranch, are in consideration to be name the State Gemstone.

Green Canyon, one of the suspected source of the Ellensburg Blue Agate.

The sign for the Rock' N' Tomahawk Ranch tells rock hunters they are in the right place.

In the windswept rangelands northwest of Ellensburg, a sky-blue gem awaits the most patient and attentive seekers.

Ellensburg blue agates are endemic to the area, in that they cannot be found anywhere else in the world. They are primarily found in the Reecer Creek and Green Canyon areas but can also be found near Thorp and west toward Cle Elum. They are a product of the 47-million-year-old Teanaway Basalt. Central Washington University geology lecturer Nick Zentner theorizes the agates were carried to the valley through Green Canyon by a river that doesn’t exist at that location anymore, and their distribution was part of an alluvial fan that was created by the now extinct river, according to a recording from his downtown lecture series.

The striking blue color of the agates has been studied by geologists at Central Washington University. Although more research is needed, the blue color may come from refracted light from tiny particles in the stone, similar to why the sky itself is blue.

Early settlers were introduced to the agates by Native Americans. The settlers began to make jewelry with them and selling them to locals and tourists, creating the foundation for the mystique and popularity they hold to this day.

WHERE TO SEE ONE

Those interested in seeing blues first hand don’t have to go any farther than downtown Ellensburg.

The Kittitas County Historical Museum has a large collection of the stones ranging from the size of a thumbnail to ones that could double as a bookend. Museum director Sadie Thayer said the collection may be the largest one in existence.

"The Smithsonian has a few samples of Ellensburg blue but not as many or as varying in size and cut as what we have,” Thayer said. “We’ve been in existence since 1961 so we’ve pretty much been collecting since the time of our formation and our founding.”

Rock hunters come into the museum to get a better idea of what to look for, but visitors with no knowledge of blues stumble across the display and ask to know more about the significance of the stones. People also ask the museum to authenticate their finds.

“That’s not a service we can do at the museum,” Thayer said. “It goes against some of the legalities of our museum, so we can’t do authentication or appraisal for any donor or any member of the public.”

Thayer said the museum considers its collection to be priceless due to the importance the stone holds in the history of the county.

“We’re just thrilled to have so many blues in our collection and the ability to share them with the public especially when they’re so sought after and such a rarity,” Thayer said. “We have so many people that are just floored by the Ellensburg blue and how beautiful it is.”

FINDING A PLACE TO HUNT

For those who want to skip the jewelry store and find their own blues, finding land to hunt on these days is a challenge. Most of it is privately owned, and permission must be granted to look in those areas. There are a few secret spots that can be found by asking the right people, but they are few and far between. The best bet is to head out to the Rock 'N' Tomahawk Ranch.

The ranch on Upper Green Canyon Road is owned by Bernice Best and her husband, Bob. Originally from the West Side, Bernice said they began purchasing their land in sections in 1988.

Rock hunters can search for the elusive blues across 180 acres on the ranch. An upper section is generally closed during the summer for grazing, but the rest is open territory. Other prizes that can be found at the Rock 'N' Tomahawk include petrified wood, arrowheads and various agates that are not true blues.

“You get some really weird stuff,” Best said. “There are a lot of different things out here.”

Best said she began inviting rock hunters onto the ranch in 1994, taking over the business from a neighboring landowner.

“That’s all she had to do all day long was sell blue permits,” Best said. “She just got tired of it. She was really an introvert and didn’t want to be bothered with people, so I told her, ‘Yeah, I’ll take it over.’”

The ranch hosts about 400 people a year during a season that starts in late March and runs until August. Best charges $5 a person and has kept the price steady for years.

“I have guys that want it all it to themselves and say you should charge $10,” Best said. “I still want to keep it a family experience.”

Best requires all visitors to the ranch call in advance to set up an orientation and sign liability waivers. She allows people to bring their dogs on the hunt if they are on a leash and kept away from livestock areas. She said she gets visitors from all over the region.

“It’s a blend,” Best said. “There are a lot of Seattle people but it’s about half and half between Eastern and Western Washington. This year is an international picture. I’ve had a lot of Japanese people saying, ‘I want to see that blue.’”

Despite being prime blue territory, Best makes no allusions to them being easy to find. She didn’t find her first one for four years.

Best found her first stone by accident. She was helping her husband work on a fence and he sent her back to retrieve a tool he forgot.

“On the way down there was a stone that just looked weird,” Best said. “It was almost black. I almost didn’t pick it up, but I did, and it was just like ‘Woo hoo!’”

The largest specimen Best has seen was found by a regular visitor to the ranch. The stone, found in 2015, was approximately the size of a fist.

The best time for hunting Ellensburg blue agates is in early summer, as frost weathering during winter pushes new stones toward the surface.

- A rainstorm will benefit rock hunters in two ways. It will keep the dust down and may offer a hint of color on the otherwise dirty stones.

- Wear proper clothing and footwear. Other essential items include sunblock, insect repellent, a long-handled screwdriver, gloves and a bucket to collect any finds.

- Bring plenty of water to stay hydrated. The water also comes in handy to clean off a suspected blue in the field, although locals say spitting on them will work in a pinch.

- Using a rock hammer is frowned upon, as they can cause sparks in the dry summer climate. They can also shatter a fragile blue, ruining the stone.

- Always look with the sun behind you. It helps expose hints of color in the rock.

- Always ask for permission before looking on private property.

- Be patient. It may take years to find a blue, but the search will eventually pay off and the memories created in the process will be just as valuable as the stone that is found.

People who don’t have the time or energy to seek their own blues in the wild can still add one to their collection.

Ireland Jewelers in Cle Elum carries a variety of blues in different sizes. Prices range at the store from $80 dollars for small stones set in earrings to rings that cost $175. Store employee Laura Snider said people who come into the store with no prior knowledge of blues are impressed at their beauty.

Snider said in the 10 years she has worked at the store, a handful of people have come in to sell their blues. She said the store’s owner will authenticate stones people have if they are interested in selling them or having jewelry made.

“He will know right away if it’s a blue or not,” Snider said. “If they want something made out of it he can cut it open and polish it up.”

Snider said she has customers coming in looking for blues all the time. She often sees parents of Central Washington University students seeking the stones when the store has a booth at local farmers markets in the summer.

“They will sometimes buy an Ellensburg blue as kind of a memento for their kid as they are graduating because they’ve been to Ellensburg,” Snider said. “It’s pretty neat.”