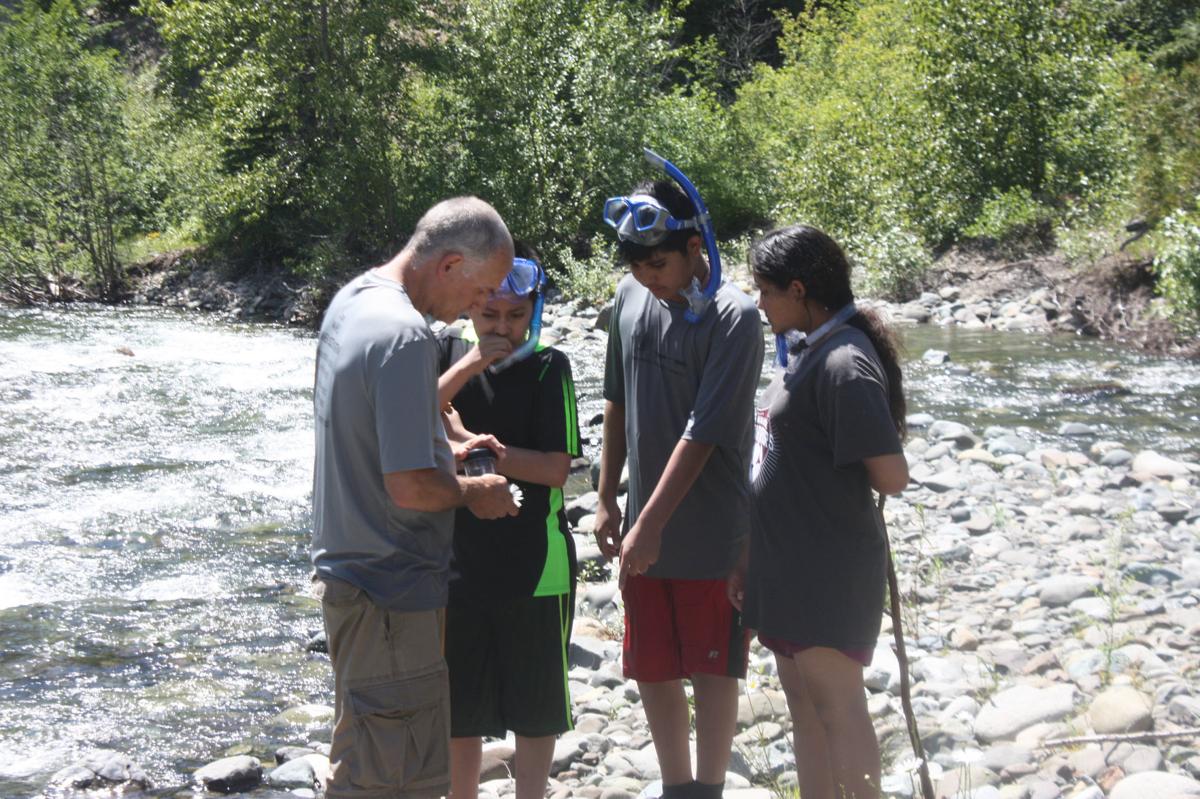 Students from Wahluke Junior High School conduct studies in the Teanaway River. The students have worked for the last two summers to collect data. 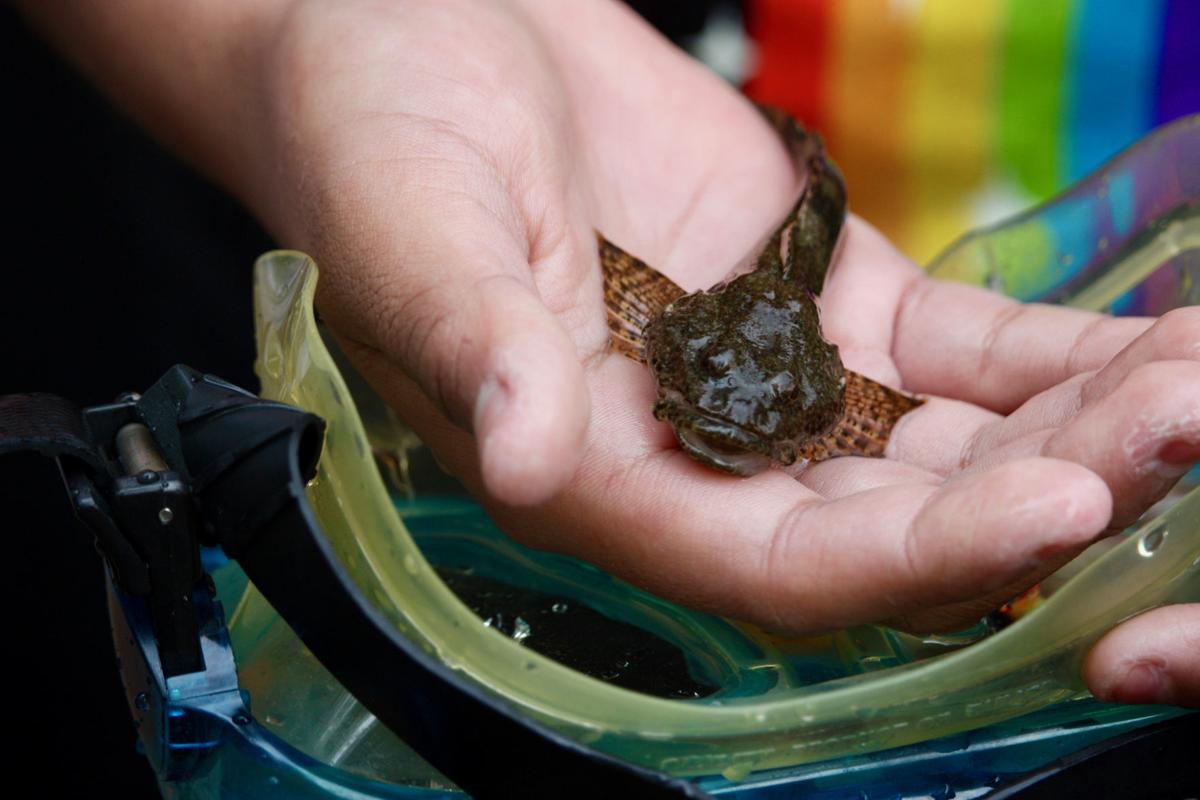 A Wahluke Junior High School student holds up a sculpin found in the Teanaway River while conducting research. The students will present their findings at the annual CWU SOURCE symposium next week. 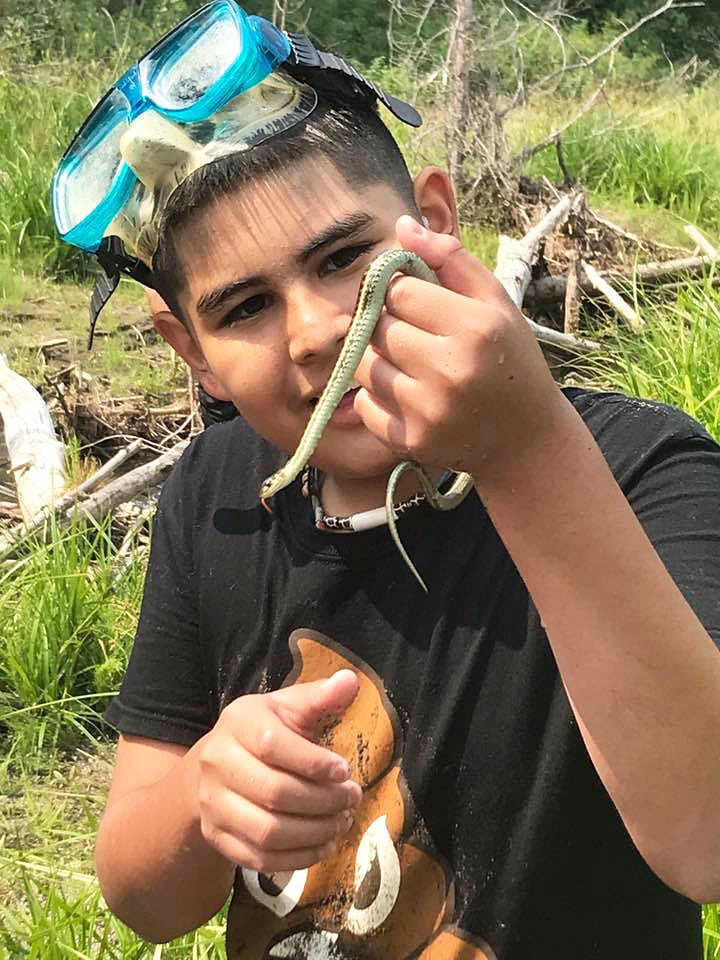 A Wahluke Junior High School student holds up a snake found while conducting research along the Teanaway River. The student group will present their findings at a CWU symposium next week.

Students from Wahluke Junior High School conduct studies in the Teanaway River. The students have worked for the last two summers to collect data.

A Wahluke Junior High School student holds up a sculpin found in the Teanaway River while conducting research. The students will present their findings at the annual CWU SOURCE symposium next week.

A Wahluke Junior High School student holds up a snake found while conducting research along the Teanaway River. The student group will present their findings at a CWU symposium next week.

When it comes to outdoor classrooms, it is hard to imagine a setting more engaging than the wild and scenic Teanaway River watershed.

A group of dedicated students led by Ellensburg resident Mike Bosko would likely be the first to agree with that statement. Bosko, who teaches at Wahluke Junior High School in Mattawa has been assisting the group in conducting scientific research along the Teanaway and its tributaries over the last two years.

“Once they get their heads underwater and they start looking at all the macroinvertebrates and the sculpins and the trout swimming by, it’s just a cool feeling,” he said.

The group conducting the research is part of an internship program started by Bosko approximately five years ago. The program is modeled after one he helped implement for college students while working for Mid-Columbia Fisheries Enhancement Group. What started as a science club for the students has evolved into a series of three-day camping trips to the Teanaway, where the students have been studying the effects of large wood replenishment programs being implemented along the river’s course.

The field work conducted by the students is primarily focused on stream ecology and fisheries. Although the number of students on the trips have fluctuated, the core group that has persisted numbers six. Beginning in the summer of 2018, they began to research the effects of the wood replenishment program by GPS mapping stream flows, took measurements on sediment levels both upstream and downstream of the projects and studied wildlife habitats around the projects to test their hypothesis that the projects would have a measurable effect on all three of those factors.

2020 will mark the second year the students will present their results through a visual presentation at the Central Washington University Symposium for University Research and Creative Expression (SOURCE), which is being held online this year due to public health conditions. According to the symposium’s website, its purpose is to provide a university-wide forum for students, encouraging equity, diversity and inclusivity, representing all disciplines and experience levels. Students present their mentored research, scholarship and creative works in a juried environment that meets professional conference standards and expectations.

As he got settled into a teaching regiment, Bosko found it was difficult to convey some of the scientific concepts he wanted to teach to students who had limited if any experience with being up close to a stream in a forest. As a result, he created the science club in 2015 to explore ways to engage the students by getting them up to the mountains.

“Just get them out to explore and see it,” he said. “It actually made my classroom so much better. We had better conversations. While I was doing that, I had a lot of kids express interest in stream ecology. For the longest time I had wanted to set something up where I could get kids out there with me.”

The students who originally joined Bosko’s science club were in sixth grade, and the core group who is conducting research in the Teanaway has been participating every year and are now finishing their freshman year. When the group organized its first summer camps two years ago, Bosko said it ended up developing into three separate weekends conducting research.

“We got them out in the streams, doing some snorkeling,” he said. “We did hikes in the forest, so they got to know the area. They started taking an interest in what was going on.”

During that first season, Bosko said college professors joined the students for segments of research, and the students got to participate in a methods course at the college level. The next school year, he said a lab was set up in the classroom to go over the data collected over the summer and the data was compiled into a visual presentation for last year’s SOURCE symposium.

“That went over really well,” he said. “I couldn’t have been prouder of them there.”

When the group began to organize last summer’s camping trips, Bosko said the financial strain and number of students who needed to participate to make it financially feasible became overwhelming from a teaching perspective. As a result, he was ready to scrap the summer camp program that season, but the core group of students that had been participating since sixth grade stepped in and pushed him to keep the program going.

“They wanted to do it,” he said. “It just gave me renewed interest. Having kids that want to get out and do science is why I got into teaching.”

Even as schools were closed due to the pandemic, Bosko said the students would continue to contact him to teleconference about their progress.

“They would take over the meeting,” he said. “Analyze their data, pull their graphs together into a poster and now they’re starting to record their presentation. They’re just amazing what they’ve done.”

As they prepare to present their second phase of findings at the virtual symposium next week, Bosko said the experience is a great way to hone the skills needed to present such material on a higher academic level.

“It’s mainly undergraduates and graduate students, but they open it for the community, so my kids have that opportunity,” he said.

Getting out in nature and using all the senses to learn has been Bosko’s primary goal in the program over the years, and he feels like that has resonated in the core group of students that have stuck with it from the beginning, regardless of what they take away from the program later in life.

“I tell them all the time that I’m not trying to make scientists out of them,” he said. “I’m just trying to give them an opportunity to try something new. That’s what got me into science myself.”