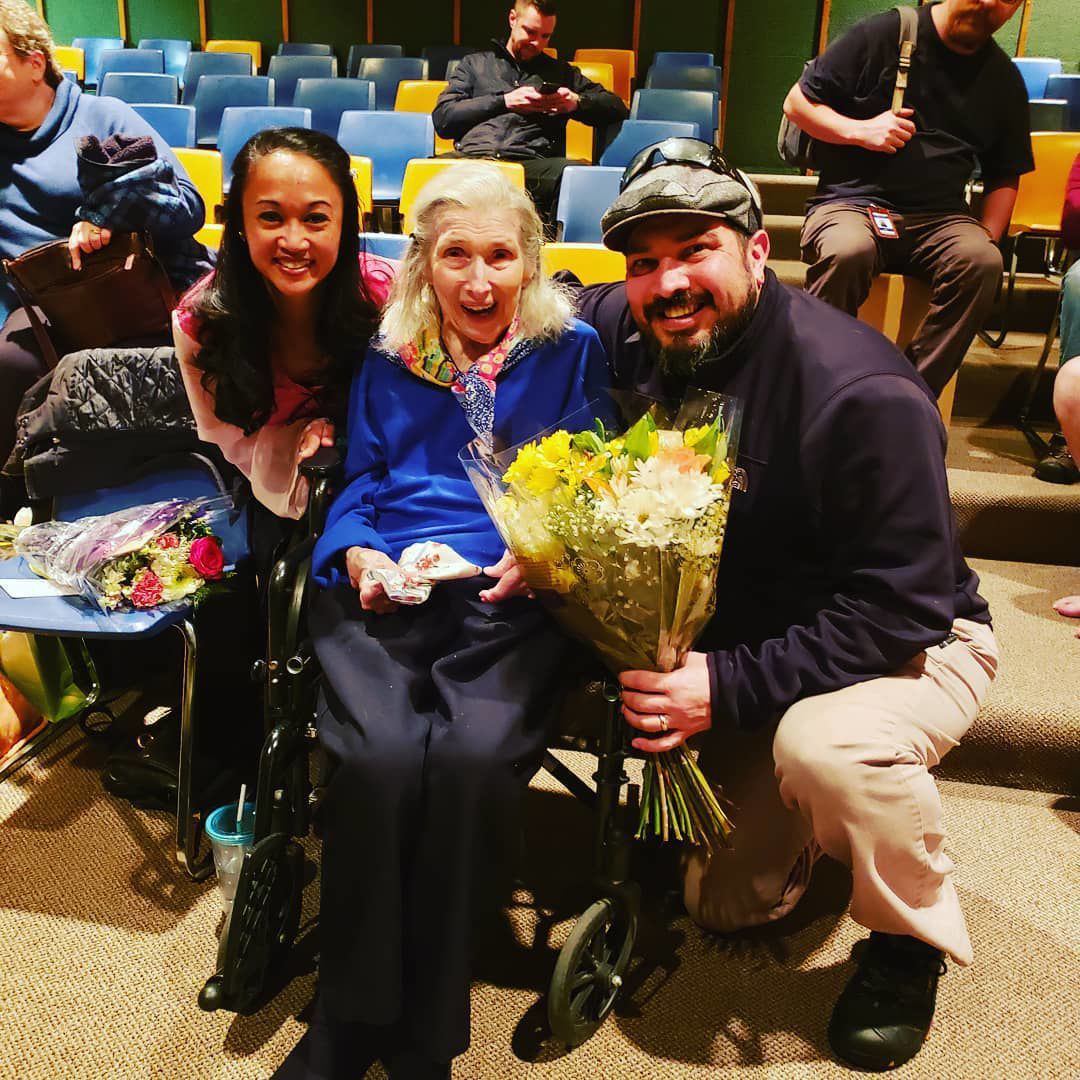 Josephine and Kevin Camarillo pose with Donna Nylander, center, at “It Takes a Village to Raise a Curtain: A Tribute to Donna Nylander,” performed earlier this year. 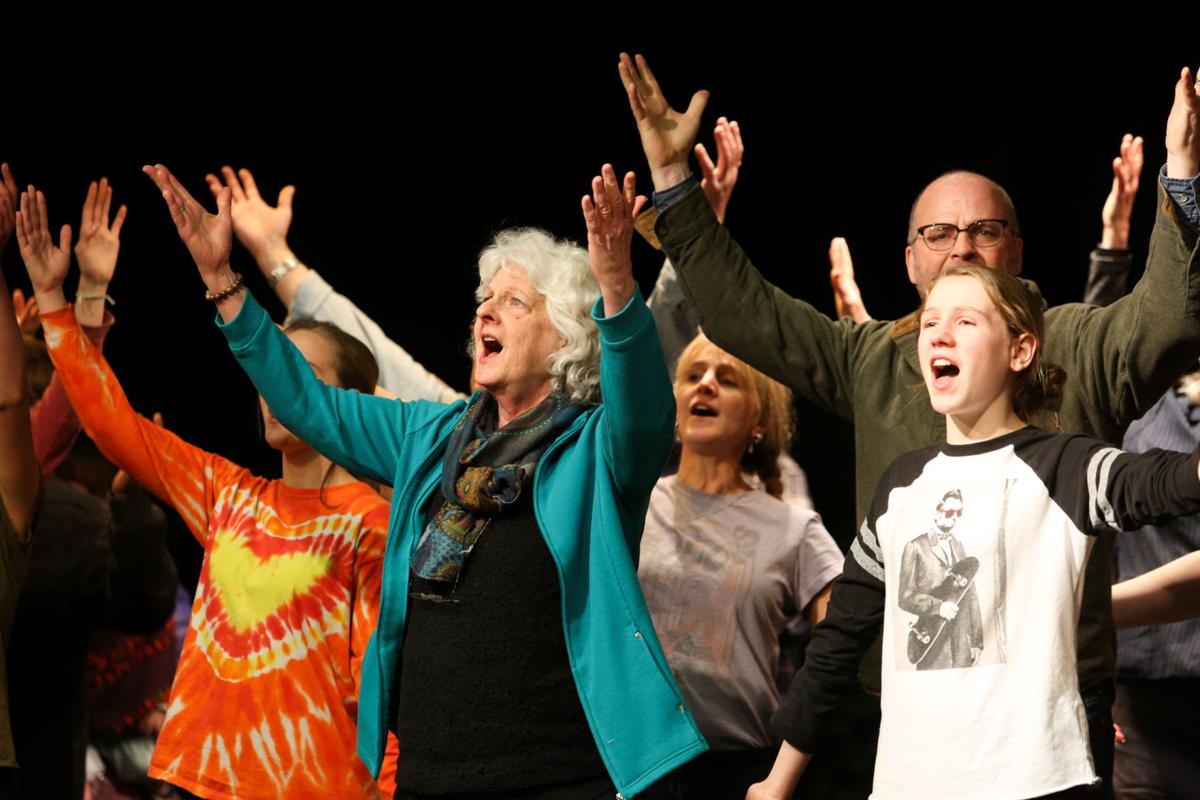 Members of the Ellensburg Children’s Musical Theatre practice for their show “It Takes a Village to Raise a Curtain: A Tribute to Donna Nylander” at Ellensburg High School earlier this year. s. 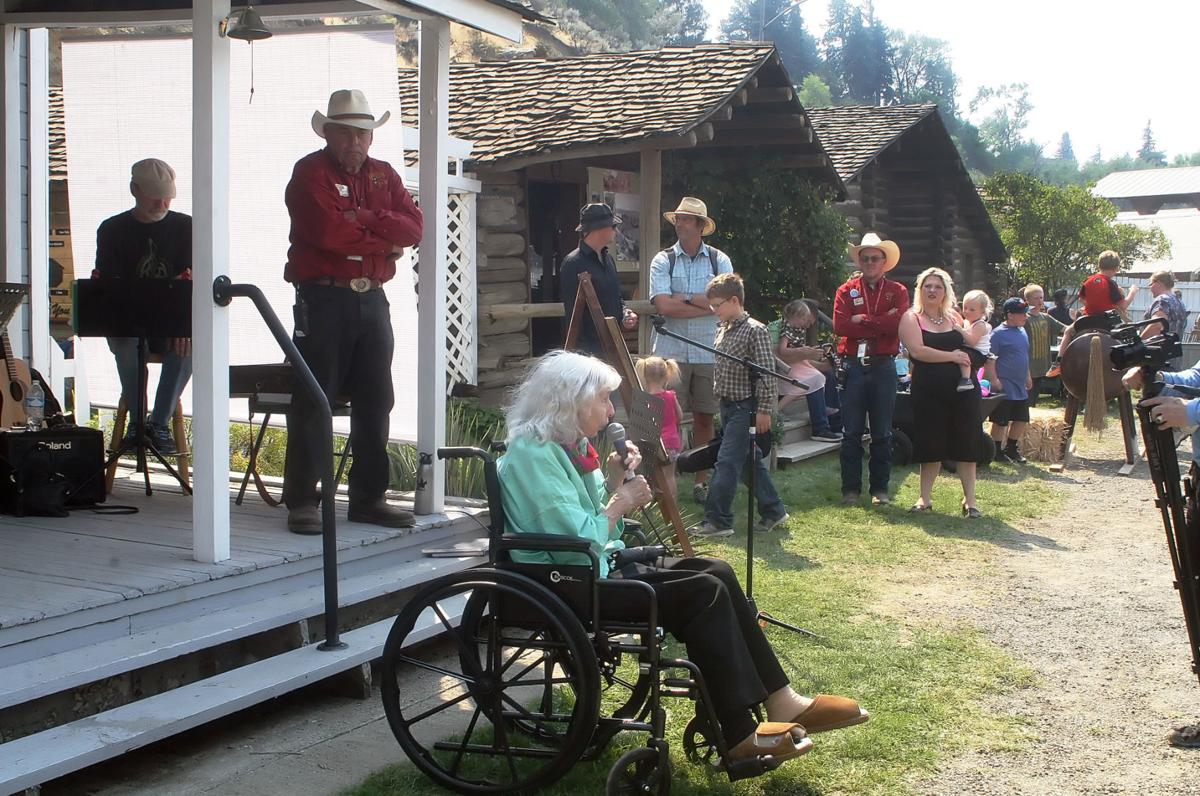 The District No. 11 Schoolhouse at Frontier Village is dedicated to longtime volunteer Donna Nylander.

Josephine and Kevin Camarillo pose with Donna Nylander, center, at “It Takes a Village to Raise a Curtain: A Tribute to Donna Nylander,” performed earlier this year.

Members of the Ellensburg Children’s Musical Theatre practice for their show “It Takes a Village to Raise a Curtain: A Tribute to Donna Nylander” at Ellensburg High School earlier this year. s.

The District No. 11 Schoolhouse at Frontier Village is dedicated to longtime volunteer Donna Nylander.

It’s not often one can pinpoint a specific moment that resulted in a turning point for not only their own life, but the life of their entire family — but when Donna Nylander was involved, everything was a tad more magical.

Adrienne Zimny had one of those moments about 17 years ago when she noticed a listing for children’s musical theater in the Daily Record calendar. Nylander died in her home Nov. 28 at age 89.

“I had a 7-year-old daughter at the time who I was looking for things to do,” Zimny said. “I went to that meeting and she just drew our family in.”

Not only did her daughter make her debut in the 2003 production of “The Orphan Train Riders,” but Zimny’s unborn son made a cameo as well as she walked across the stage at one point.

“I was hugely pregnant,” Zimny said with a laugh. “It was more like waddling across the stage. He was literally born three weeks later.”

“We’ve been involved in every Donna show after that,” Zimny said. “She was just an amazing force in the community. She saw everyone’s gift, everyone’s talent. Hidden or visible, she could take a shy kiddo that was coming to maybe just check it out and find the light in them, make them feel comfortable being in a group on stage, contributing to the show in some manner.”

Zimny said whether that talent was whistling, or a newly-harnessed yo-yo talent, Nylander would make sure to have that child shine on stage.

When the world of theater can sometimes come really competitive in nature, Zimny said Nylander was able to always keep the environment teeming with a family feeling. Ellensburg Public Library Director Josephine Camarillo, who also was in “The Orphan Train Riders” show echoed that sentiment.

Camarillo moved to Ellensburg in 2000 to become the young adult librarian, not knowing a single soul in town. As soon as she arrived, she was directed to meet Nylander, who immediately was full of ideas on how to connect with children in the community.

“She sees children as such a great joy that can enhance the community if they’re given the right opportunities to get involved in,” Camarillo said.

One of their first projects was starting Family Poetry Night at the library, an event that continues to this day. All over town Nylander’s legacy can be felt, whether it be places like Friendship Park that she helped create on Fifth Avenue, or annual events like the “Teddy Bear’s First Christmas” play.

According to Camarillo, the holiday tradition started when some faculty at Central Washington University asked Nylander to read some stories to children for a “teddy bear tea.” While she embraced the idea, Nylander decided to flesh it out in only a way she could.

“In her reluctance to just sit there and read a story, she invited some of her children’s musical theater people to come and do a little mini performance on a story she created,” Camarillo said.

That mini performance in 2012 turned into a published children’s book in 2014, and then a full-blown production that’s happened every year since.

Nylander’s declining health in recent years affected her ability to regularly direct Ellensburg Children’s Musical Theater productions, resulting in a four-year absence of shows. Earlier this year, Camarillo and others decided to put together a tribute show in her honor. The show titled “It Takes a Village to Raise a Curtain: A Tribute to Donna Nylander” included included excerpts from several of her original plays.

“She was just smiling the whole time during the show and crying,” Camarillo said. “The whole theater was crying and smiling, because for people who had been involved in theater, they’ve seen all those plays and to see them come alive on stage … it was satisfying and heart warming.”

Camarillo is determined help to carry on Nylander’s legacy and continue Ellensburg Children’s Musical Theater productions into the future, and is currently putting together a board of directors to help move the program forward. For more information on that front, call Camarillo’s office phone at 509-962-7252.

“She’s one of those people who you feel will be here forever,” Zimny said. “You just never think of them of not being here. To be honest that’s the Donna legacy. She did touch so many lives and bring this special feeling to so many people that she really does live on in all of us and all of our children.”

While Donna Nylander was known for her musical theater prowess, her contributions to the community didn’t end there. Moving to Ellensburg in 1957, she was a charter member of the Kittitas County League of Women Voters, which was founded in 1968.

“She always had lots of ideas,” said Jo Green, current league member who moved to Ellensburg in ‘68 and lived close to Nylander.

Green even helped her run for Ellensburg City Council, which she served on from 1984 through 1990, setting out to promote tourism as opposed to manufacturing.

“I was going around knocking on doors and handing out pamphlets for that,” Green said. “She knew a lot of people and people knew her, and she had things she’d like to see done.”

Green also was part of a neighborhood group with Nylander over the years, which started as a biking group, then turned to walking and now the neighbors gather for brunch once a month. The last few months were held on Nylander’s patio.

“She asked that we come over to her place,” Green said. “So we had a potluck there and remembered good times. … We’re meeting again this month and we’ll be thinking of her when we do.”

A celebration of life and reception for Donna Nylander will be held at 1 p.m. on Dec. 15 at the Hal Holmes Community Center in Ellensburg.