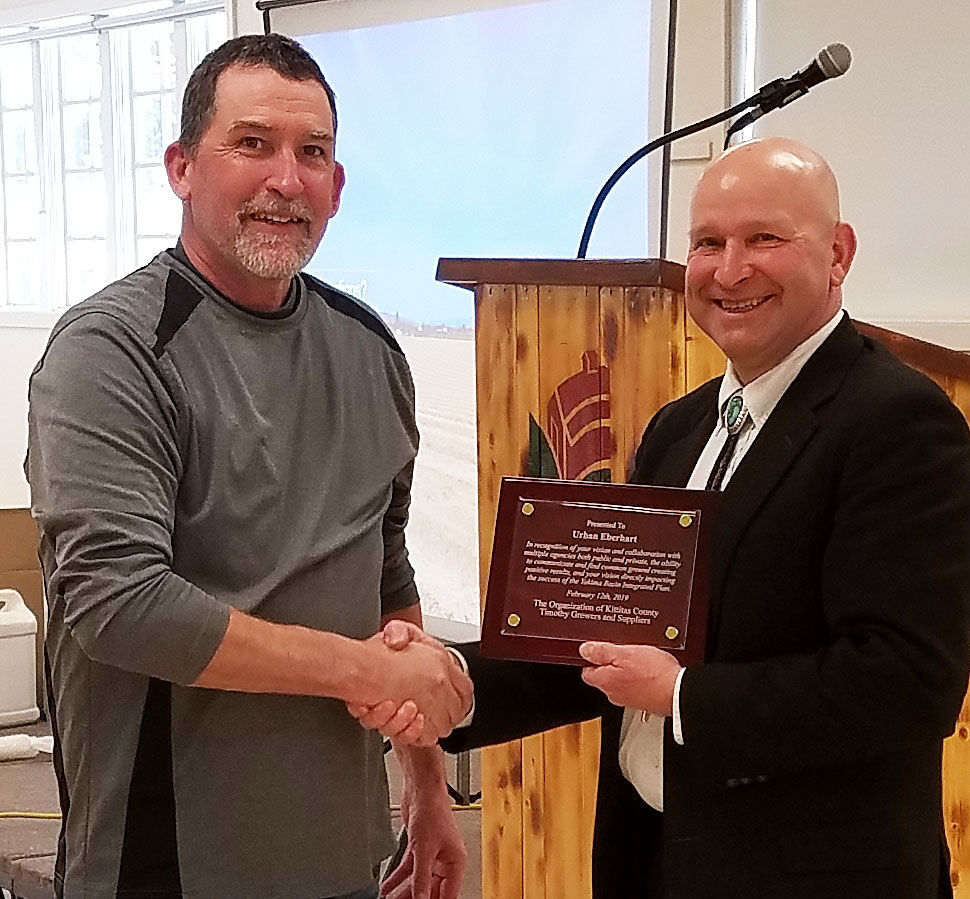 LEFT: Carl Jensvold, president of the Organization of Kittitas County Timothy Hay Growers and Suppliers presents a plaque of recognition to Urban Eberhart of the Kittitas Reclamation District at the organization’s annual meeting Tuesday.

ABOVE: Jensvold present a plaque to Anna Lael, district manager for the Kittitas County Conservation District. 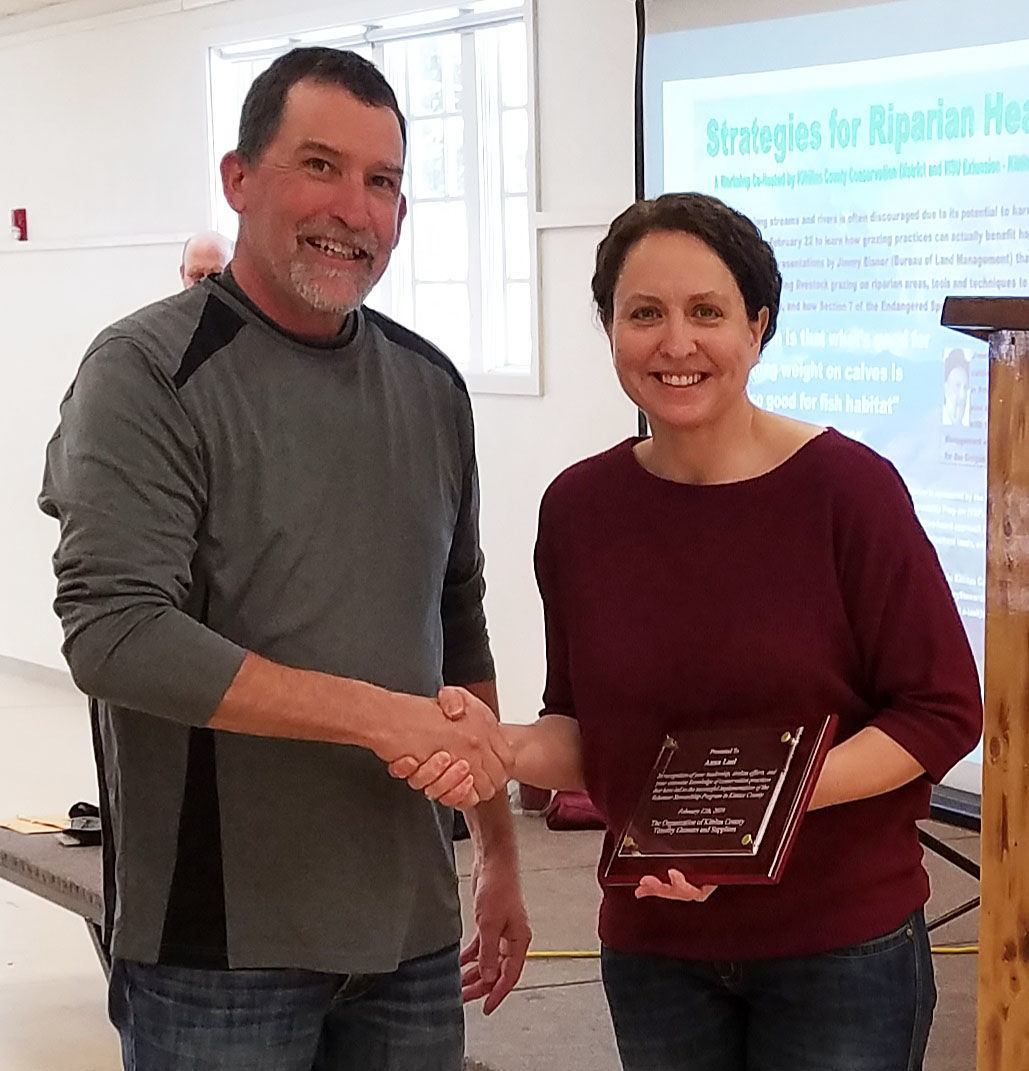 Carl Jensvold, president of the Organization of Kittitas County Timothy Hay Growers and Suppliers presents a plaque of recognition to 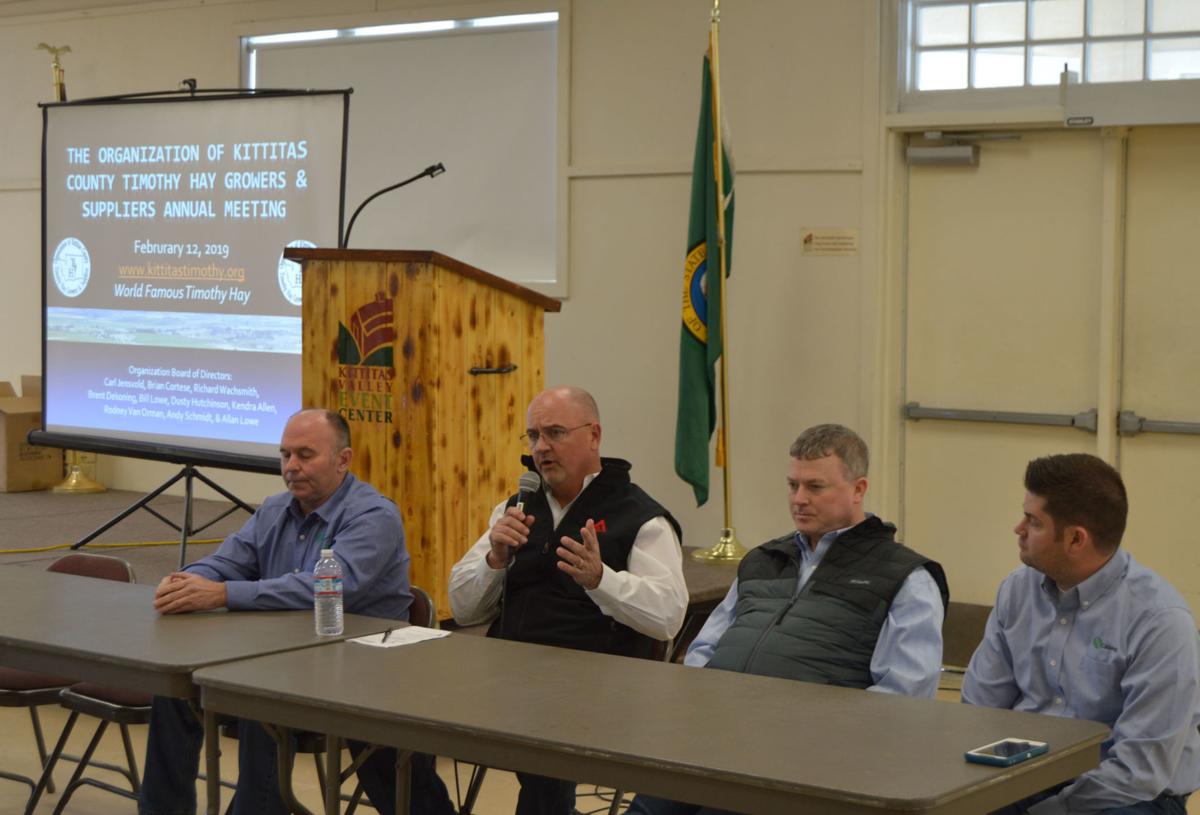 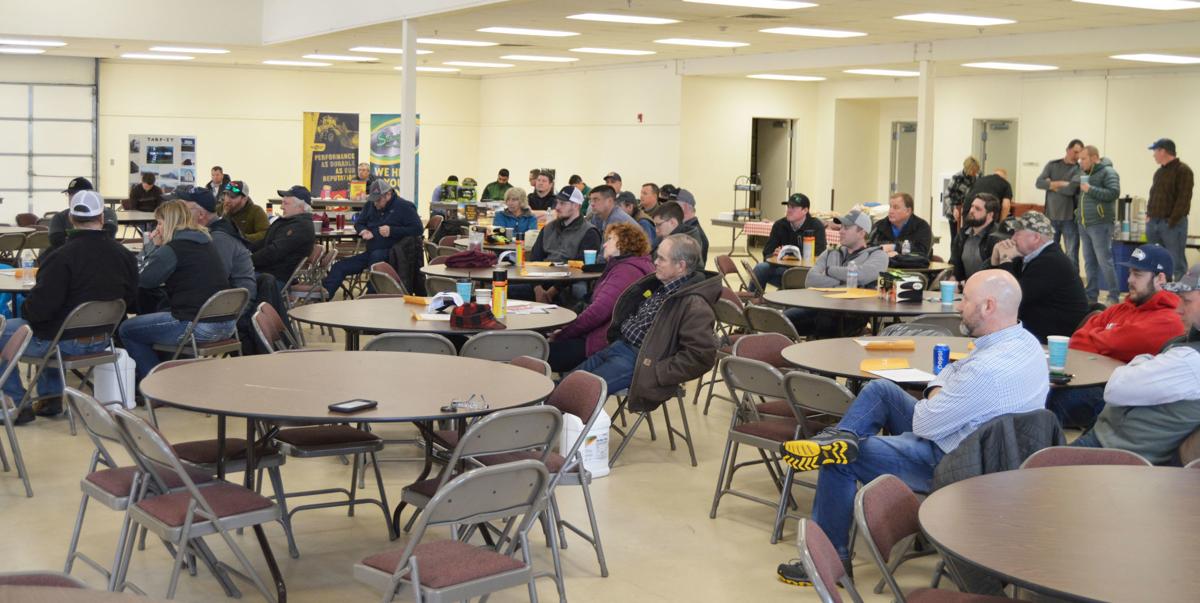 Attendees of the Organization of Kittitas County Timothy Hay Growers and Suppliers annual meeting listen to an industry panel at the Kittitas County Fairgrounds on Feb. 12. 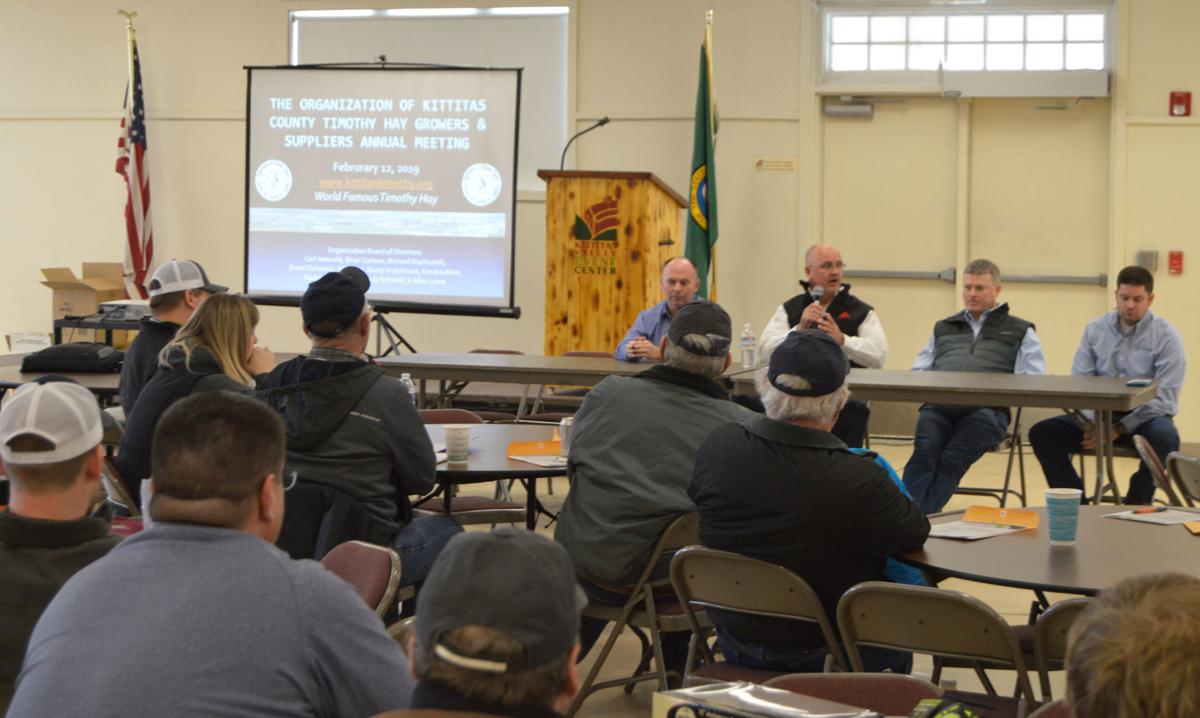 Attendees of the Organization of Kittitas County Timothy Hay Growers and Suppliers annual meeting listen to an industry panel at the fairgounds Tuesday.

LEFT: Carl Jensvold, president of the Organization of Kittitas County Timothy Hay Growers and Suppliers presents a plaque of recognition to Urban Eberhart of the Kittitas Reclamation District at the organization’s annual meeting Tuesday.

ABOVE: Jensvold present a plaque to Anna Lael, district manager for the Kittitas County Conservation District.

Carl Jensvold, president of the Organization of Kittitas County Timothy Hay Growers and Suppliers presents a plaque of recognition to

Attendees of the Organization of Kittitas County Timothy Hay Growers and Suppliers annual meeting listen to an industry panel at the Kittitas County Fairgrounds on Feb. 12.

Attendees of the Organization of Kittitas County Timothy Hay Growers and Suppliers annual meeting listen to an industry panel at the fairgounds Tuesday.

Local growers, exporters and other industry members gathered in Teanaway Hall at the fairgrounds Tuesday for the annual meeting of the Organization of Kittitas County Timothy Hay Growers and Suppliers.

The meeting’s agenda included informative talks on subjects such as noxious weed management, as well as an industry panel that discussed various issues facing the industry in a town hall format. Anna Lael with the Kittitas County Conservation District and Urban Eberhart from the Kittitas Reclamation District were presented with plaques of recognition for their efforts within the industry.

Organization President Carl Jensvold has been a member since he began farming in the valley over 20 years ago. He said duty to the organization is something many in the industry take on during their career.

“You kind of step up and do your turn when there’s an opening,” he said.

The purpose of the organization is to have a unified voice for growers in the valley, and to deal with the various issues that face the industry. Its roots span back to the 1970s, when valley growers faced export blockages to Japan. These days, the organization is composed of approximately 80 growers and 20 industry members.

Jensvold said aside from the annual meeting, the organization’s board holds regular informal meetings to deal with any issues that arise, and the annual meeting is a chance for growers to learn about the work done by the board at their meetings.

“This gives us an opportunity to share that information with all of our members,” he said. “We’re really a conduit from the board to the membership.”

Although the organization does not regularly give out awards of recognition at its annual meetings, Jensvold said they felt it was necessary to recognize Lael and Eberhart this year for the work they have done. Through her position at the Conservation District, Lael has worked to promote understanding and implementation of the Voluntary Stewardship Program.

“She was able to implement a program that works for us in Kittitas County without Olympia dictating,” he said. “That’s just a huge burden off of us as growers.”

Eberhart was recognized for his work on moving forward legislation to fund the Yakima Basin Integrated Plan.

“Urban has been passionately involved in the plan,” he said. “To have the vision and the ability to work with people, he’s just gone above and beyond.”

The panel made up of valley exporters touched on a range of subjects including rotation crops, logistics and port access, environmental initiatives, existing hay stocks and trade competitiveness.

Anderson Hay and Grain CEO and panel member Mark Anderson said the issue of trade competitiveness came up in the form of fumigation practices. He said all the timothy in the valley exported to Japan is fumigated to eliminate the Hessian fly as part of a program that began in the 1970s. This process creates an added expense of approximately 5 percent per ton. The costliness of the program peaks in the winter, when containers must be heated in order to complete the process.

“Some are doing that, and some aren’t in the industry with some of the new players in the Columbia Basin,” he said. “That’s creating an uneven playing field.”

Anderson said it is not mandatory to fumigate timothy before export to Japan, but there is an inherent risk of the exports being rejected if shipments contain non-timothy plants that tend to carry the Hessian fly, which is killed in the fumigation process.

“It’s an insect plant quarantine issue,” he said. “It’s an agreement we made with Japan years ago that all the timothy shipped would be fumigated.”

With the potential of an uneven playing field, Anderson said the two options are that all exporters fumigate, or the program is eliminated. He said the risk involved with the program being eliminated is that if Japan decides to crack down on inspections and finds more issues with potential insect infestation, the odds of shipments being rejected could rise to the levels seen in the 1970s when timothy hay was blocked from export to that country. This would have a large impact on the industry, as Anderson said Japan accounts for over half of all timothy exports.

Anderson said the industry became aware this winter that some exporters were not going to fumigate their shipments. He said most of the outfits that chose not to fumigate were smaller-volume exporters that had more to gain by charging less, but less to lose if a shipment was rejected.

“What they’re doing is having a whole wide market impact,” he said.

STEWARDS OF THE LAND

Kittitas County Conservation District Manager Lael said she began presenting information related to the Voluntary Stewardship Program at the organization’s annual meetings about four years ago. The program focuses on agricultural practices occurring in critical areas defined under the state’s Growth Management Act. Examples of critical areas include wetlands, fish and wildlife habitat areas, geological hazard areas and critical aquifer recharge areas. Lael said the program has been approved by the state, and the district is now working on implementing it.

At one point, Lael said agricultural practices were exempt from regulations, but that is not the case nowadays.

“This program is set up in order to keep them voluntary,” she said. “To keep the work in ag practices in critical areas voluntary instead of being regulated.”

Lael said additions of state-mandated regulations would be a heavy burden on producers, thus making the voluntary component especially important. She said the voluntary program places emphasis on enhancing the critical areas while maintaining the viability of agriculture in those areas.

“It was nice of them to recognize me for it,” she said. “Really, we’re all working on it. The whole group, including the hay growers.”

Kittitas Reclamation District Manager Urban Eberhart’s passion lies in bringing both reliable and sustainable irrigation options to the Kittitas Valley. In the 1980s, he began making trips to Washington D.C. to work on what was then called the Yakima River Basin Water Improvement Plan. The plan aims to balance irrigation security in extreme drought situations with environmental enhancement efforts in the basin.

Congress voted to implement phases one and two of that plan in 1984 and 1994, respectively. On Tuesday, Congress voted 92-8 on a bipartisan omnibus bill that included funding to implement the initial development portion of phase three of the project, now referred to as the Yakima Basin Integrated Plan. The third phase is a 30-year plan, broken up into three 10-year periods.

“We’re right on the verge of the most monumental thing that potentially could be benefit to us that has occurred since 1994,” he said.

“We actually have two potential vehicles in the House at the same time,” he said. “If the lands package passes in the House, we won’t need that, but it’s an indication that we have a fallback.”

Eberhart spent the past week in Washington D.C. along with Kittitas County Commissioner Cory Wright advocating for the legislation. Eberhart said discussions with both minority and majority leadership have been positive.

“It has a good chance in the U.S. House of Representatives,” he said.

As grateful as he was for the recognition from the hay growers at their annual meeting, Eberhart said he still has a lot of work to do moving forward.

“It’s just my constant focus on finding a way to set this region that we are in up for survival into the next century,” he said. “That there is enough water for farms to irrigate, for fish and wildlife, for municipalities and people and for industry, so that everybody can move forward and survive into the future.”