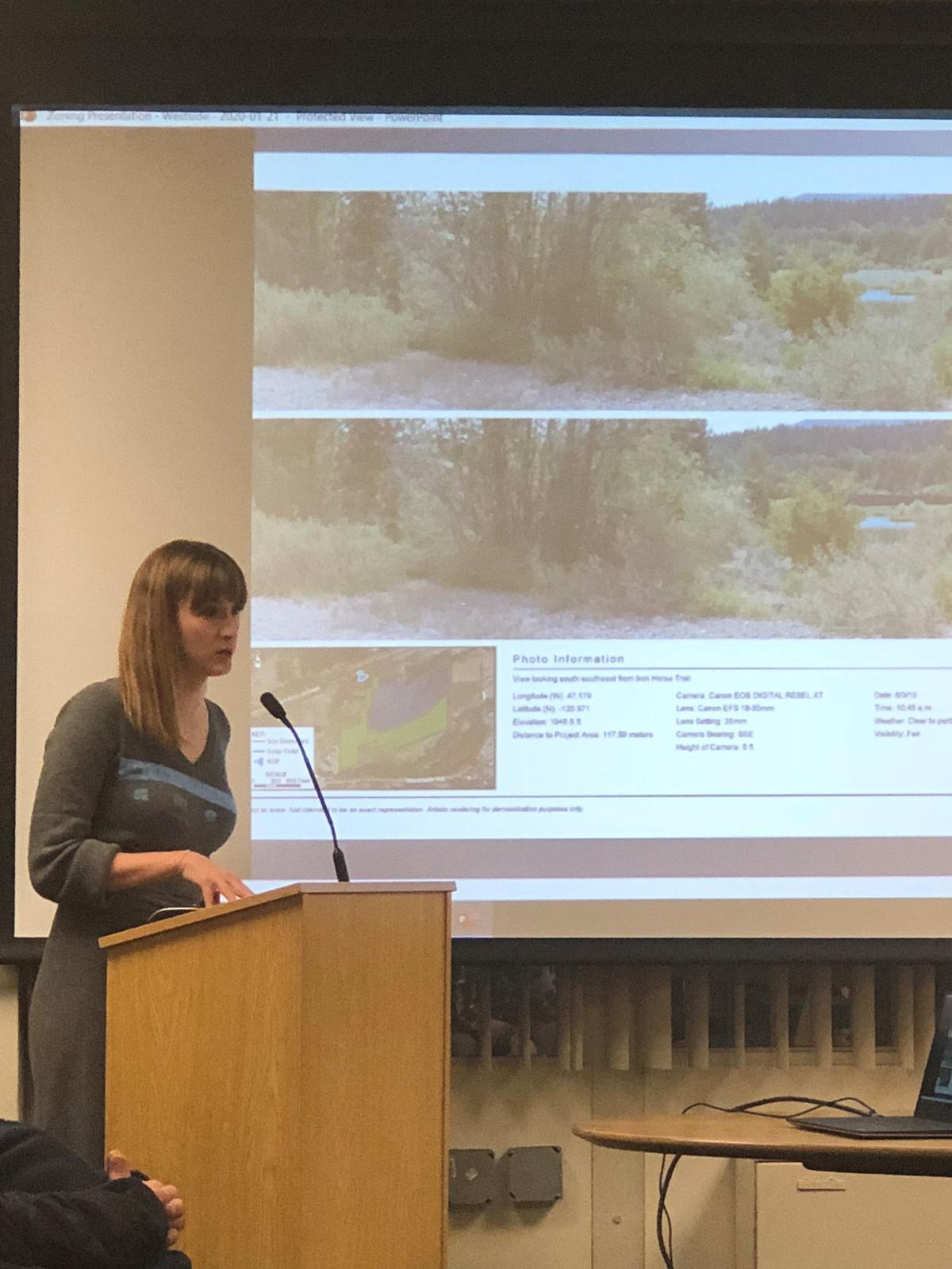 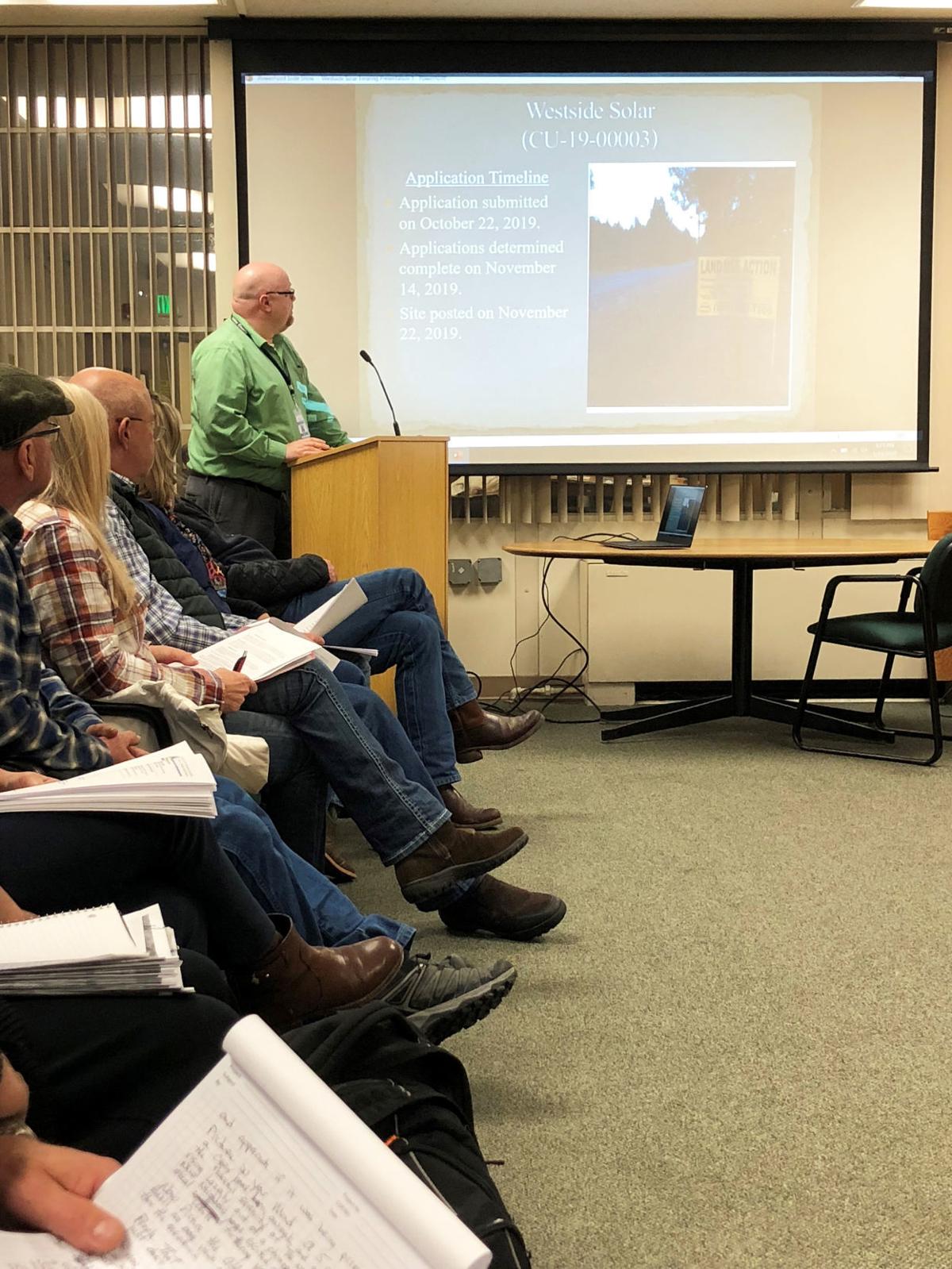 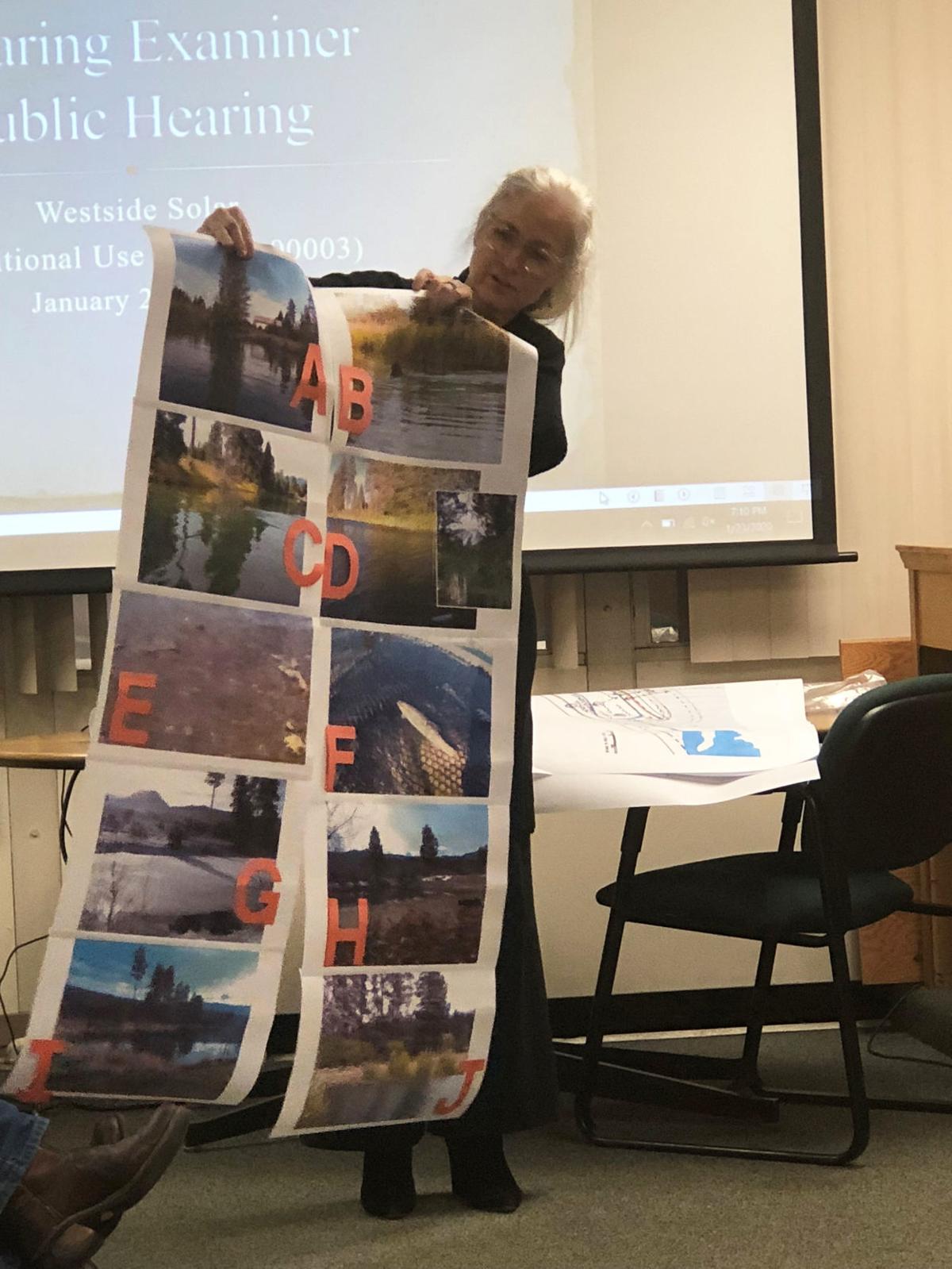 Landowner Teresa Van Lone shows pictures of a wetland area on her property, which sits adjacent to the proposed solar facility at a hearing examiners meeting on Jan. 23. {span}Hearing Examiner Andrew Kottkamp denied the projects application for a conditional use permit. {/span}

Landowner Teresa Van Lone shows pictures of a wetland area on her property, which sits adjacent to the proposed solar facility at a hearing examiners meeting on Jan. 23. {span}Hearing Examiner Andrew Kottkamp denied the projects application for a conditional use permit. {/span}

A proposed solar array in Upper County has had the brakes placed on its project plans, for now at least.

North Carolina-based Heelstone Renewable Energy’s Westside Solar project was recently denied for a conditional use permit for its project, which was planned for a 46-acre plot of land on Westside Road near South Cle Elum. The proposed five-megawatt array was met by a flurry of objections by adjacent landowners and neighbors at a hearing examiner’s meeting on Jan. 23.

In his decision, Hearing Examiner Andrew Kottkamp placed specific focus on a provision of conditional use permit code that states, “The proposed use is essential or desirable to the public convenience and not detrimental or injurious to the public health, peace or safety or to the character of the surrounding neighborhood.”

This decision largely was based on complaints from neighborhood residents about visual impacts from the proposed array. Kottkamp noted that the character of the surrounding neighborhood is rural, residential and agricultural uses, and that the proposed use of the site is detrimental to those uses because of the project’s visibility to other properties.

“If the use could be adequately shielded year-round, with appropriate natural vegetation, from the surrounding properties, the ‘detriment’ or ‘injury’ to the character of the adjoining neighborhood could be adequately mitigated,” Kottkamp said in his decision. “The overwhelming testimony from the public related to the negative and detrimental impact is the view of the solar facility, rather than the view of natural vegetation.”

Although Kottkamp sided with neighbors on the visual impact issue, he did note that the proposed use of the property is compatible with other rural land uses, and that solar power production facilities (SPPFs) preserve the rural character of the land and further protect it for years to come, due to having limited impervious surfaces and is otherwise similar to agricultural uses seen on rural land.

“Based on the evidence submitted (by the) applicant, the hearing examiner can make a finding that this use would preserve the overall ‘rural character’ of Kittitas County, that it would require only rural government services, and that it does not compromise the “long-term” viability of resource lands,” Kottkamp said in his decision. “Again, the code does not provide a definition of what “long-term” means. Additionally, as set forth above, the hearing examiner finds that the proposed use is generally consistent with the intent, goals, policies and objectives of the Kittitas County comprehensive plan. However, there are portions of the Kittitas County comprehensive plan in which the proposed use is not consistent.”

With the denial of the conditional use permit, the project developer now has the option to either appeal the decision to the state supreme court or bring their case before the Washington State Energy Facility Site Evaluation Council. Representatives for Heelstone Renewable Energy were not available for comment on the decision.