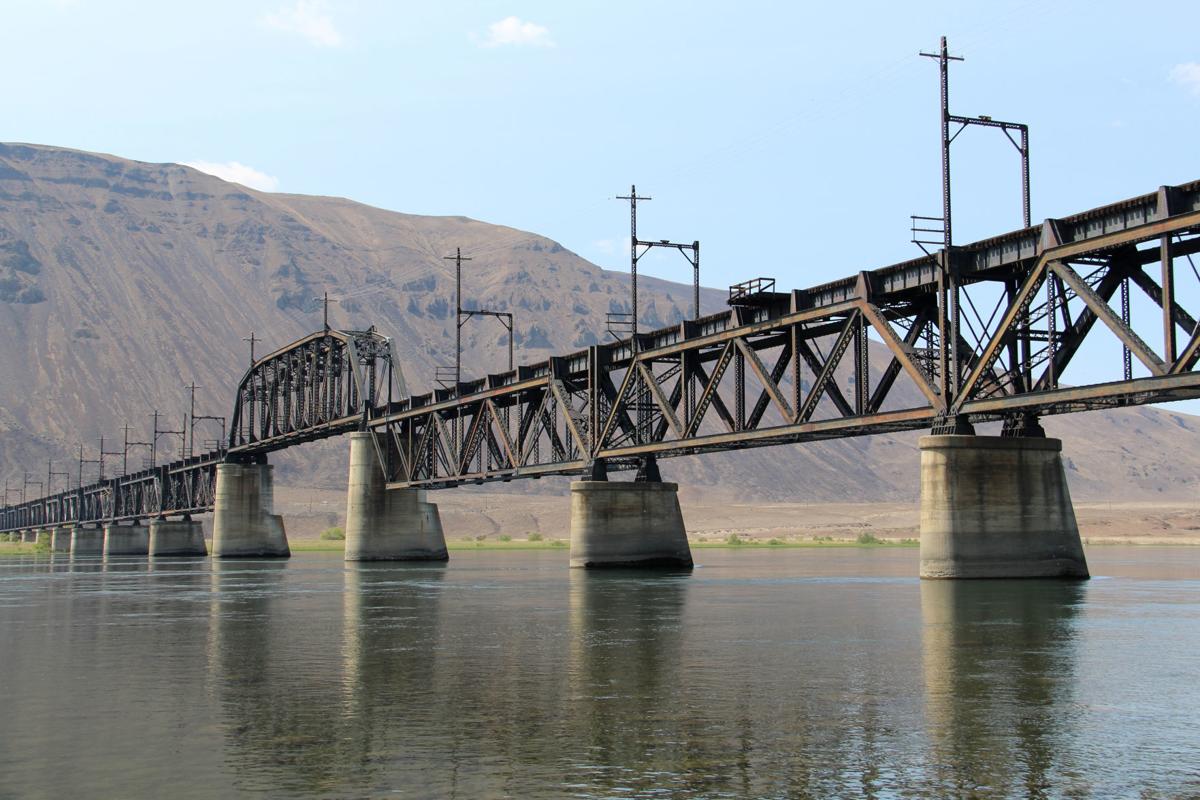 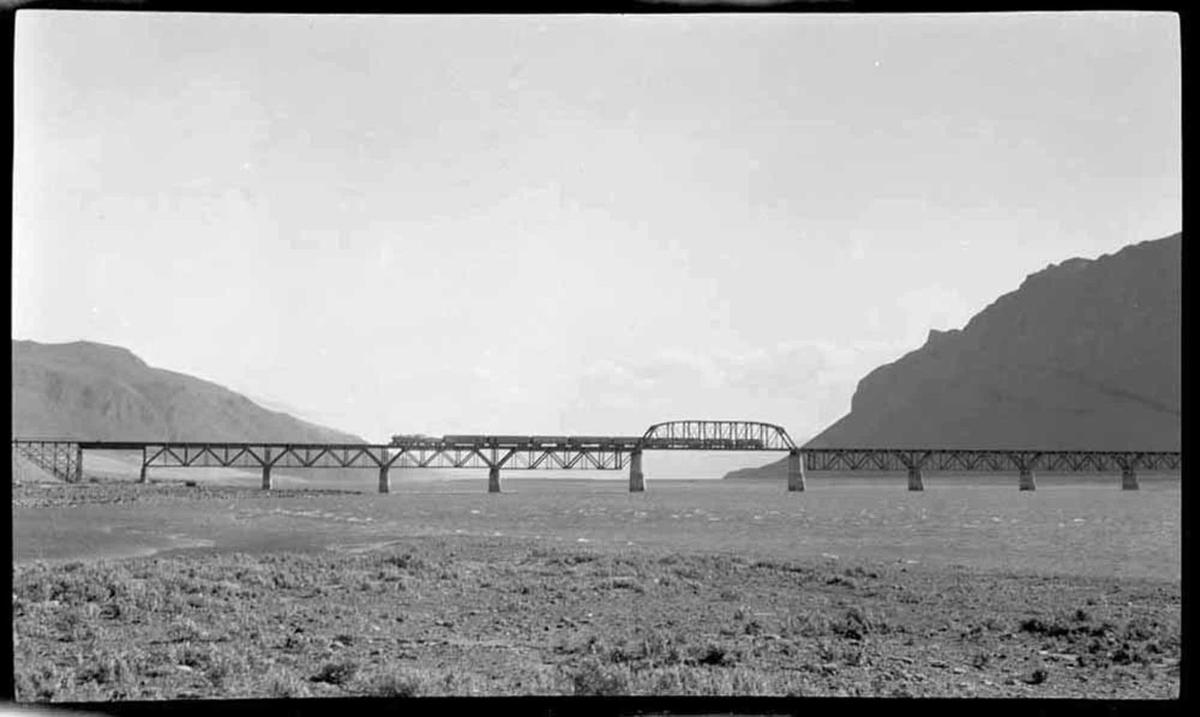 A view, looking south, of a Chicago, Milwaukee & St. Paul Railway passenger train crossing the bridge over the Columbia River between Grant and Kittitas Counties at Beverly, sometime around 1910. The Saddle Mountains, north of Priest Rapids, are visible in the background.

A view, looking south, of a Chicago, Milwaukee & St. Paul Railway passenger train crossing the bridge over the Columbia River between Grant and Kittitas Counties at Beverly, sometime around 1910. The Saddle Mountains, north of Priest Rapids, are visible in the background.

A piece of local railroad history has received a substantial chunk of funding for future rehabilitation, creating a vital link between Kittitas and Grant counties.

The Beverly Railroad Bridge received $5.575 million in capital funding appropriations as part of the recently passed 2019-21 capital budget. The bridge was built in 1909 as part of the Chicago, Milwaukee, St. Paul and Pacific Railroad, otherwise known as the Milwaukee Road. It was one of the final stages of the railroad’s Pacific Extension, linking Chicago, Illinois to Tacoma. The extension was completed in 1909.

The bridge crosses the Columbia River, connecting the two counties at Beverly, south of Vantage. It is 85 feet high, with a total of 15 trusses. Supports for the catenary still exist from when the railroad electrified in the 1920’s. The railroad abandoned the line in 1980, and ownership was transferred to the state. The bridge was listed in the National Register of Historic Places in 1982 due to its historical significance related to westward expansion. A fire destroyed the bridge deck in 2014, making the bridge unsafe for passage.

Now, the bridge is part of the Palouse to Cascades State Park Trail, previously known as the John Wayne Pioneer Trail, which follows the historic Milwaukee Road right of way through the state.

Senator Judy Warnick, who represents the 13th Legislative District said she and 13th District Rep. Tom Dent were presented with the idea of rehabilitating the bridge from a coalition of interested organizations last fall.

“I drive by that bridge quite often, but didn’t realize it wasn’t being used,” she said. “I learned a lot through this process.”

Warnick said there was strong bipartisan support for the bridge funding, with being a proponent of both the trail and historically significant sites within the state, with Senators Jim Honeyford and David Frockt, as well as Rep. Steve Tharinger working to move the plan forward.

“There was bipartisan support to draft a proviso to look at the different areas and different uses for the bridge, other than just trail use,” she said.

Along with the benefits of connecting the Palouse to Cascades State Park Trail across the bridge, Warnick said she was informed that Grant County Public Utility District was interested in the possibility of installing a transition line across the bridge once it was rehabilitated. She said another potential use is the occasional transport of orchard workers from the Grant County side to the Auvil Fruit Company orchards south of Vantage.

“Right now, orchard workers have to go all the way down to the Vantage Bridge to cross,” she said. “It would save quite a bit of time if they could use it.”

Warnick said one of the concerns she relayed to organizations involved in the rehabilitation effort was the protection of cultural sites related to the Wanapum Tribe that would be situated near the trail path once the bridge is open to pedestrian use. Multiple burial sites and hundreds of historic artifacts were exposed when water levels were drawn down for repairs to the dam in 2014.

“I just want to make sure that fencing or some type of barrier would be looked at between trail users and the fruit company and the Wanapum Dam historic sites,” she said.

With the bridge currently unsafe for passage, Palouse to Cascades Trail users must find alternative routes to cross the river. As a back-country horse rider, Warnick said she has seen interest from organizations like the John Wayne Pioneer Wagons and Riders Association in the bridge rehabilitation. She said some trail riders were in that area this week and after having to portage around the river at another crossing, they talked about the possibility of making the bridge deck safe for riders and possibly wagons to cross.

“It’s a long bridge, pretty high up over the river,” she said. “I don’t know if there could be some sort of a barrier between the animals and the edge of the bridge, but they’re being brought in as well.”

With all the potential benefits from the rehabilitation project, Warnick is excited for the future that stands ahead for the bridge.

“There will be hikers, bicyclists, possibly horse riders and then the occasional emergency vehicle and then an occasional orchard worker,” she said. “It’s going to have a lot of uses.”

Chris Moore, executive director for the Washington Trust for Historic Preservation said the effort to preserve the bridge falls directly in line with his organization’s goal of advocating for projects of that sort.

“The Beverly Bridge is one of those very iconic structures that represent our railroad history,” he said. “Really beyond, it is a representation of the expansion of commerce to the West and development to the West.”

A few years ago, Moore said the trust received $125,000 from the Burlington Northern Santa Fe Railroad as part of a mitigation settlement. Because the railroad had plans to replace four other historic bridges, Moore said they were obligated to mitigate for the loss of those structures.

“They did a number of things,” he said. “One of the things they did was provide money to in turn basically do a cost assessment of the Beverly Bridge. We as the organization that received those funds hired a bridge engineering firm, put together a document that showed what it would take to rehabilitate the bridge for recreational use. That document essentially became the basis for the request in the capital budget.”

Although his organization was instrumental in the process of receiving the appropriation, Moore said they are not involved in next stages of the project. He said the funds for the project went to the Washington Department of Archaeology and Historic Preservation, and it will be their responsibility to work with agencies like the Department of Natural Resources and Washington State Parks to move forward with the project.

“We’re just really happy to see that the legislature opted to fund the project,” he said.

Because of the bridge’s listing on the National Register, Moore said that made the structure a clear candidate for preservation. Beyond the historic value, he said there have been countless advocates within the recreation community for rehabilitation. He said the importance of creating a connection for the Palouse to Cascades Trail helps perpetuate the historic legacy of the bridge.

“With the bridge closed, it really was sort of the single most critical gap in that trail,” he said. “We’re really excited that with these state funds, hopefully the project will move forward, and people will be able to cross the bridge again.”