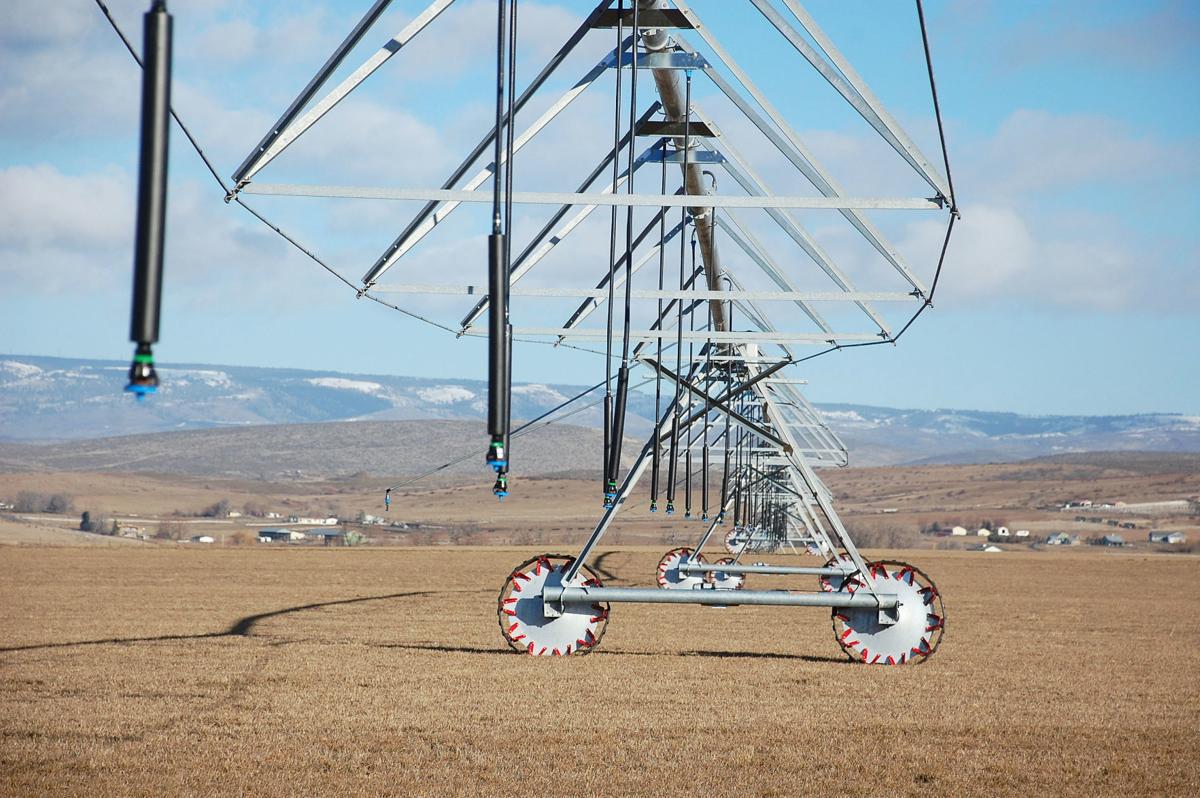 A newly-constructed center-pivot sprinkler irrigation system is pictured near Ellensburg. The system was part of a project conducted by the Kittitas County Conservation District. 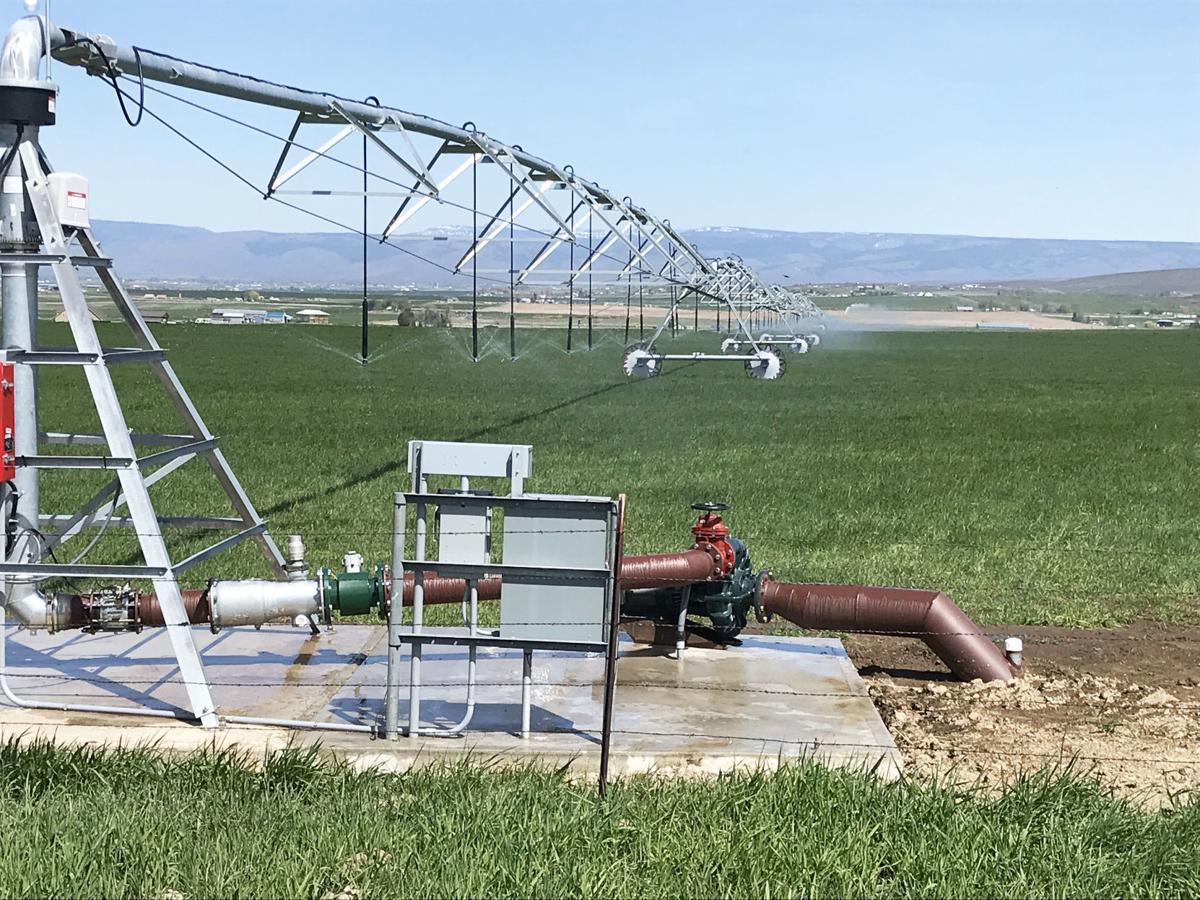 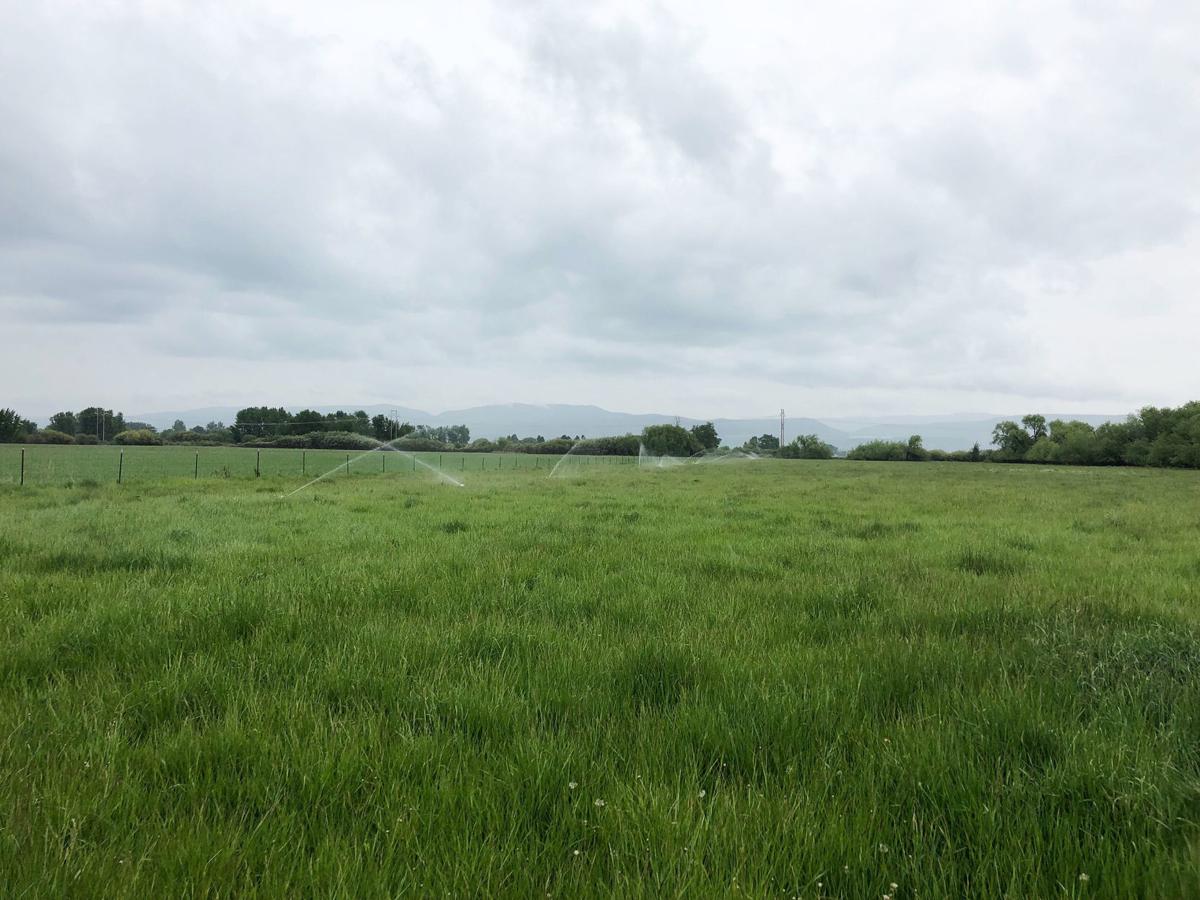 A limited-scale sprinkler pod system on grazing land is another example of conversion options through the Kittitas County Conservation District.

A newly-constructed center-pivot sprinkler irrigation system is pictured near Ellensburg. The system was part of a project conducted by the Kittitas County Conservation District.

A limited-scale sprinkler pod system on grazing land is another example of conversion options through the Kittitas County Conservation District.

As hot dry summers translate to more frequent droughts and less water for irrigators, the Kittitas County Conservation District is working to find methods to help producers improve their efficiency when it comes to water usage.

Producers who haven’t converted to sprinkler usage tend to use either flood or more commonly rill irrigation, which employs the white PVC pipes frequently seen within the valley. Lael said efficiency varies, but that a well-managed rill system can be reasonably efficient, but not as efficient as sprinklers.

“Sprinklers are in the 80 to 85 percent efficiency range, where rill irrigation can range from 50 to 70 percent,” she said. “Those systems were good for their time. We’ve made progression in the valley, improving efficiency over the decades and every system was more efficient than the last one. Sprinkler usage just follows along with that.”

“Our projects tend to be smaller, so the cost is higher,” she said. “That smaller footprint makes for a higher cost per acre for the producer.”

As a result, Lael said producers need to conduct their own analyses about whether the conversion makes sense for them financially. She said another constraint is that it is expensive to bring in power to sites in the valley. All in all, she said the conversion from rill to sprinkler-based irrigation is a learning curve for producers.

“It’s a different style of irrigation,” she said. “You do it at different rates and with different timing. It takes a little bit to learn that as well.”

“Obviously we wouldn’t have a list of folks that were interested in doing these conversions if sprinklers weren’t working for them,” she said. “Even in a short water supply year, I think it stretches their water supply out a little bit longer.”

Lael pointed out that one place a sprinkler does not help is stretching out a water usage year for a junior water rights holder when prorationing is in effect.

“Even if you could have stretched and gotten by with less water than your full allotment, if the whole irrigation district has to shut down early then that doesn’t help you,” she said.

Because some producers have land that isn’t totally conducive to sprinklers, Lael said that in those cases using sprinklers on at least a portion of the land can be beneficial. She said even in a full water year, some irrigation districts can still have difficulty delivering water to producers.

“Having a sprinkler system in or something more efficient uses less water,” she said.

Along with the conversion assistance program, the district has also recently purchased a drone outfitted with a camera to help assess peoples land and water use. She said the district recently sent out postcards reminding producers that they can help them assess their sprinkler irrigation systems to help ensure they are working at peak levels. The district is also planning on purchasing more advanced flow monitoring equipment, but Lael said funding for that purchase came in later than expected.

“That causes some frustration on our part,” she said. “Getting that emergency drought money to us in time for us to actually be able to help people with it.”

Despite delays in some funding, Lael said there is quite a bit of funding available for the conversion program. The money is coming from multiple sources, including the Yakima Basin Integrated Plan. She said the district conducts signups for the program during the fall.

“As folks come in and tell us about projects they are interested in and give us a little information about it, we’re able to try to help plug them in to whichever one of those funding sources fits their situation the best,” she said.

Lael said the district has been working for many years to get the program in place and reach out to producers that could use an extra hand with their water usage efficiency, and that it is rewarding to be able to put that plan into action.

“We are extremely grateful for the funding that we’ve been able to get from these different sources and being able to start working down that list,” she said. “To be working with folks we haven’t worked with before, it’s fantastic all the way around.”