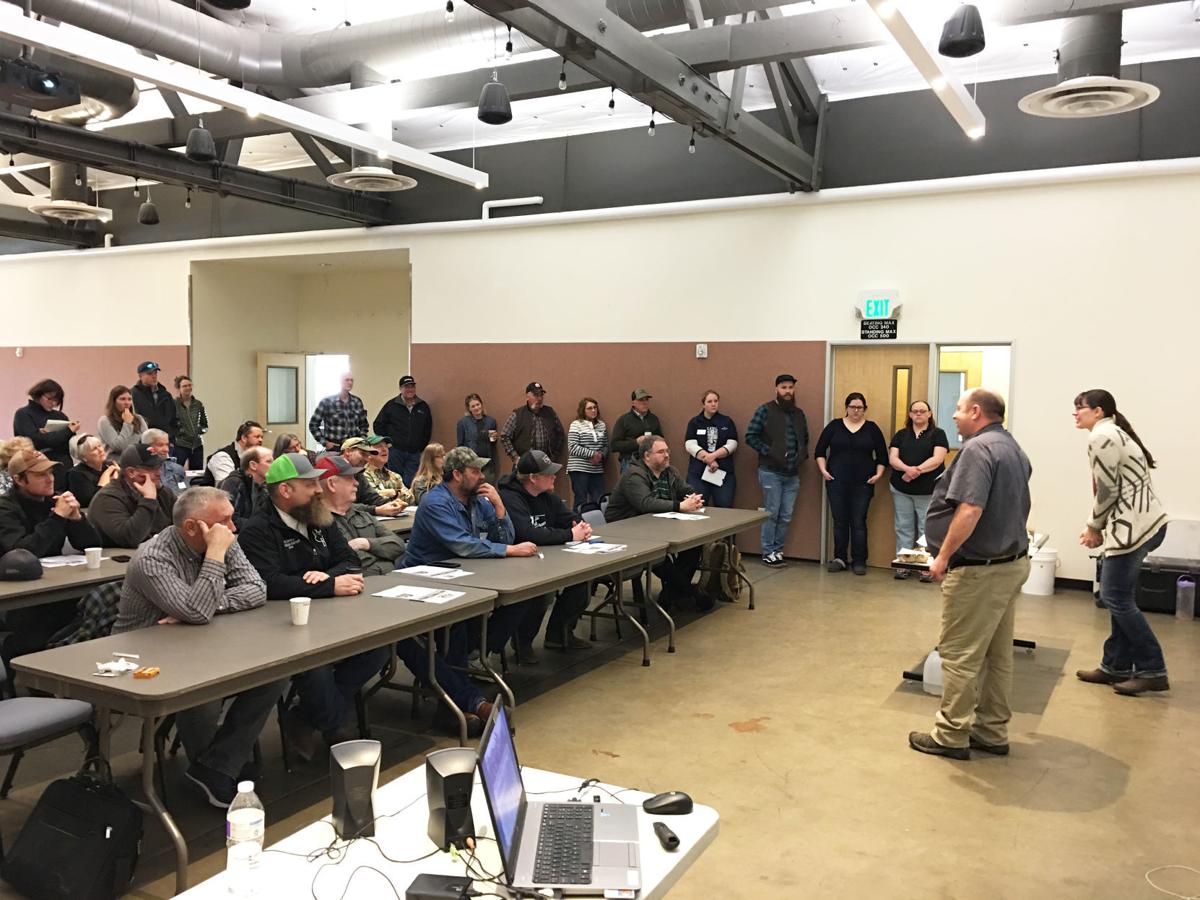 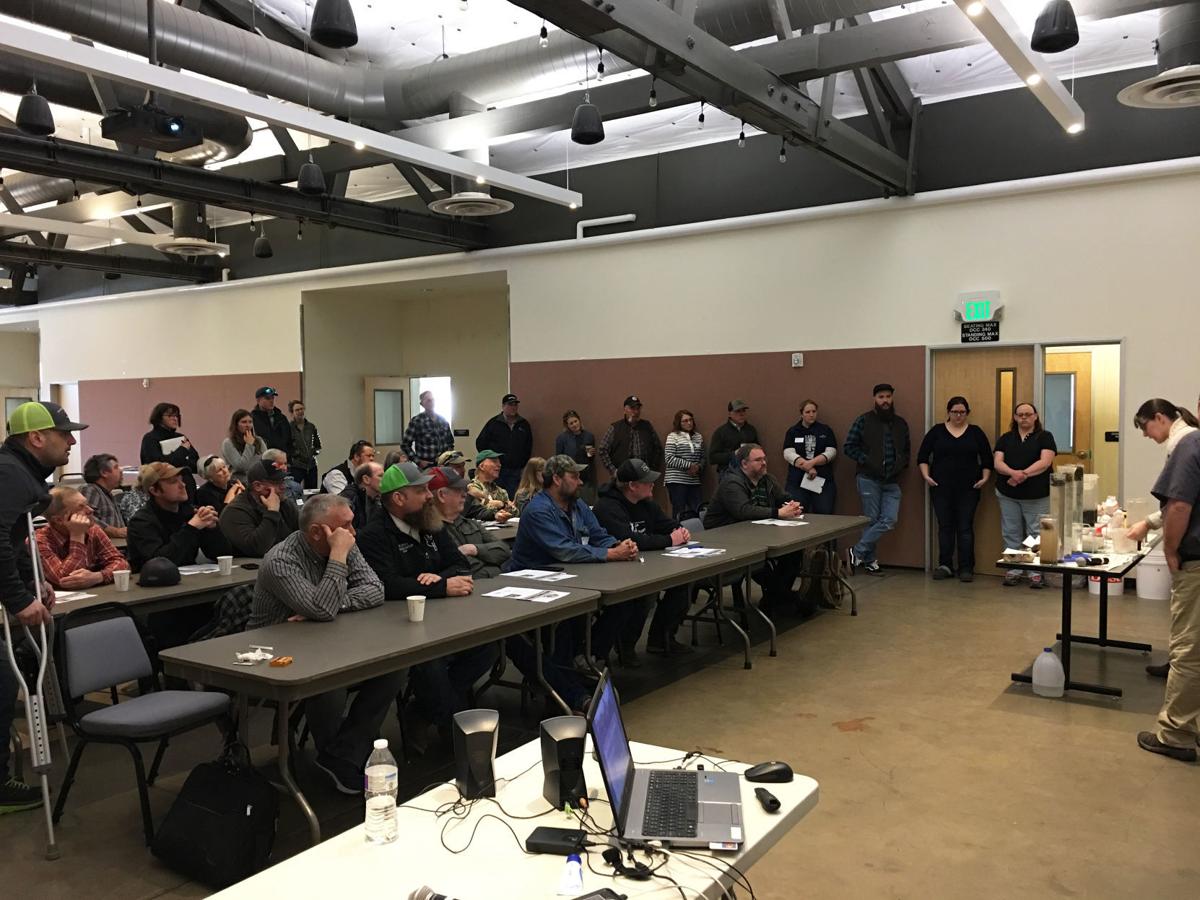 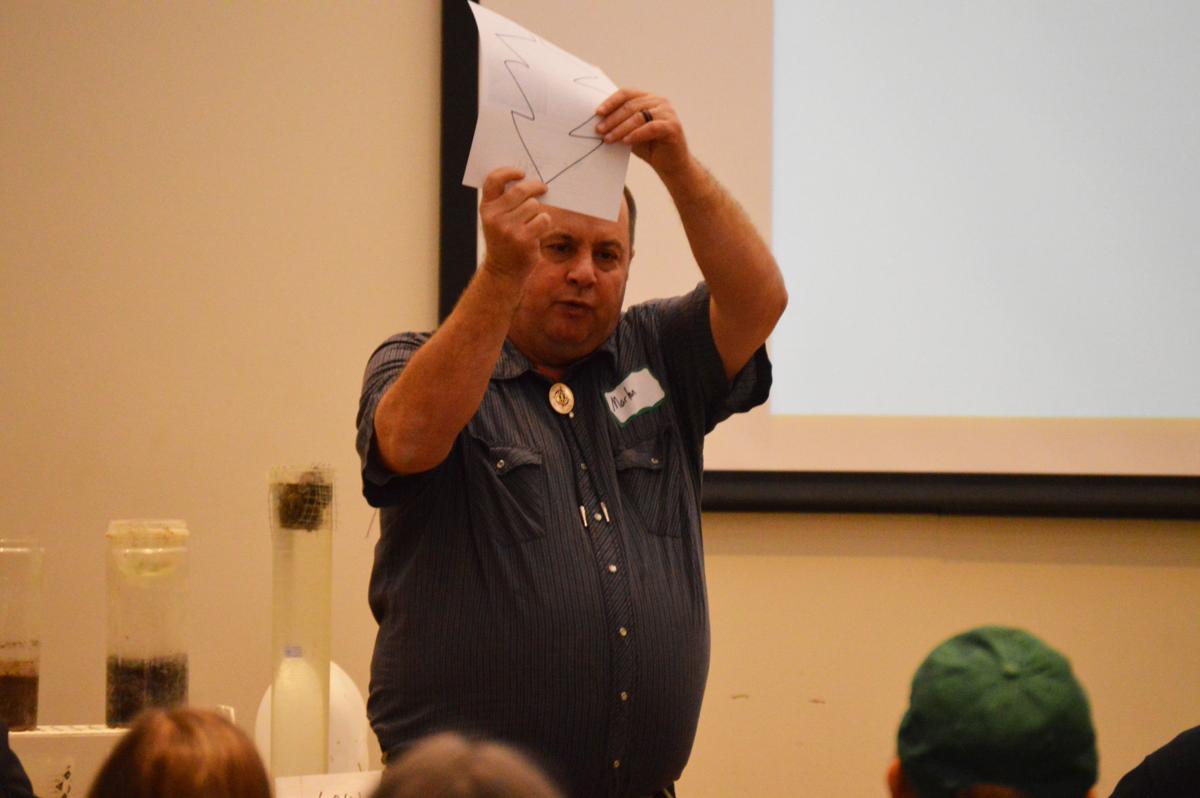 USDA Agronomist Marlon Winger holds up an illustration during his lecture on soil health at a workshop hosted by the Kittitas County Conservation District Thursday.

USDA Agronomist Marlon Winger holds up an illustration during his lecture on soil health at a workshop hosted by the Kittitas County Conservation District Thursday.

The Kittitas County Conservation District wants local farmers to know that there are options out there to enhance their agricultural viability, and they plan on working to educate all that are interested.

The district held a workshop Thursday at the Armory that focused on soil health. The workshop attracted approximately 40 farmers and ranchers from the county, and hosted USDA Natural Resources Conservation Service Agronomist Marlon Winger, who is a regional soil health specialist for Wyoming, Idaho and Montana. Other speakers included Holly Taylor from the NRCS office in Ellensburg and Leslie Michel from the Washington Department of Agriculture.

Winger’s presentation began with a review of soil health basics, as well as an introduction to the core principles of soil function. The principles included minimizing disturbance of the soil, maximizing diversity of plants in rotation including cover crops, keeping living roots in the soil as much as possible, keeping the soil covered at all times with plants and plant residues and integrating livestock on the cropland.

The workshop is part of the Kittitas County Volunteer Stewardship Program, which is led by the KCCD. The program is a voluntary approach to support both agriculture and natural resources and aims to provide technical and educational assistance to interested producers.

KCCD District Manager Anna Lael said that the workshop is the second one the district has held. The first was held last year and focused on riparian planting and management. She said the inspiration to bring Winger to Ellensburg to lecture came from the recommendation of a member of the Washington Cattleman’s Association, who had seen Winger lecture in Idaho and recommended he come speak to producers in Kittitas County.

“He goes around the West to do these presentations,” she said. “When I got a hold of him, he asked if I could ask around and see if any other counties wanted him to speak as well, since he came all the way from Wyoming. He did the same workshop in Okanogan (County) on Wednesday, and then came down here on Thursday.”

Lael said her takeaway from the lecture was that Winger was relaying to producers how important it is to understand soil health and soil biology, so that farmers can be actively working with their soils.

“I thought he was very good at conveying basic soil structure and soil biology,” she said. “What a healthy soil looks like. He kind of put it back to farmers and said here are some options, here are some ways you can improve the health of your soils. Part of that is less disturbance to the soil. Less mechanical disturbance, less plowing and disking and the use of cover crops to bring some of the soil health pieces up.”

Lael felt like the producers that were in attendance for the workshop were very open and interested. In talking to Winger, she said the consensus is that an emphasis on practices that emphasize soil health have been slow to be adopted in western states.

“It’s a pretty big mindset change,” she said. “What he was really encouraging everyone to do was to find some small ways to implement some of these things, and kind of just keep going. He talked about other areas he’s worked in where it takes five or 10 years to get a few folks to fully implement some of this work. This was kind of that first step of really sharing all of that basic information about soils and soil functions and soil health to get folks thinking about it and give them some ideas.”

Beyond the lecture, Lael said a major component of workshops like this is to give producers and idea of what programs and assistance are available to them if they choose to implement some or all of the concepts covered in the workshop.

“And then it’s on us, the conservation district to follow up with folks and see what we can encourage,” she said. “How we can help folks to do the kind of things he was suggesting in the workshop.”

At this years workshop, Lael said she was very pleased by the turnout and level of interest from producers.

“Not all of them are going to implement these practices, but I think it was really nice to see them so interested in what he was presenting and asking great questions and really thinking about it,” she said. “We’re really hopeful that there will be some change we’ll see in the future.”

“I think it’s going to take more than one workshop for sure,” she said.

Through the Voluntary Stewardship Program, Lael said she expects to continue the pattern of putting on workshops to expand options and ideas for how producers operate their farms.

“We’re hoping to make this an annual thing,” she said. “We’re looking for topics of interest to folks, to our producers.”

Lael said although a large part of the Voluntary Stewardship Program involves protecting and enhancing critical areas where agriculture is practiced, an equally important component is maintaining the viability of agriculture in Kittitas County.

“I think continuing to keep up with the latest technologies, new and expanded information about farming practices, about crop types, about options, all of that,” she said. “It’s on us to do that under the Voluntary Stewardship Program so that we really can be working on viability of agriculture.”

Lael acknowledged that the viability of agriculture can be affected by challenges such as weather conditions, economic conditions and foreign trade issues.

“All that kind of stuff is outside of our control, outside of our producers’ control,” she said. “But bringing in this kind of technical information and assistance as we learn about it, as folks tell us about it and are interested in it and think others might be interested in it, I think that’s really the piece of the Voluntary Stewardship Program that we can work on.”

Lael said she is currently working on getting all the presentation materials up on the conservation districts website so that producers that weren’t able to attend the workshop can access the information. She also encouraged producers that may be interested in learning more to reach out to the district.

“We encourage anybody who things they might be interested in implementing some of these soil health principles or cover crops or anything like that to reach out to us or the (Natural Resources Conservation Service) office here,” she said. “We’d really like to help folks. If they’re interested and willing to implement some of this and there are ways we can help them, we want to do that.”