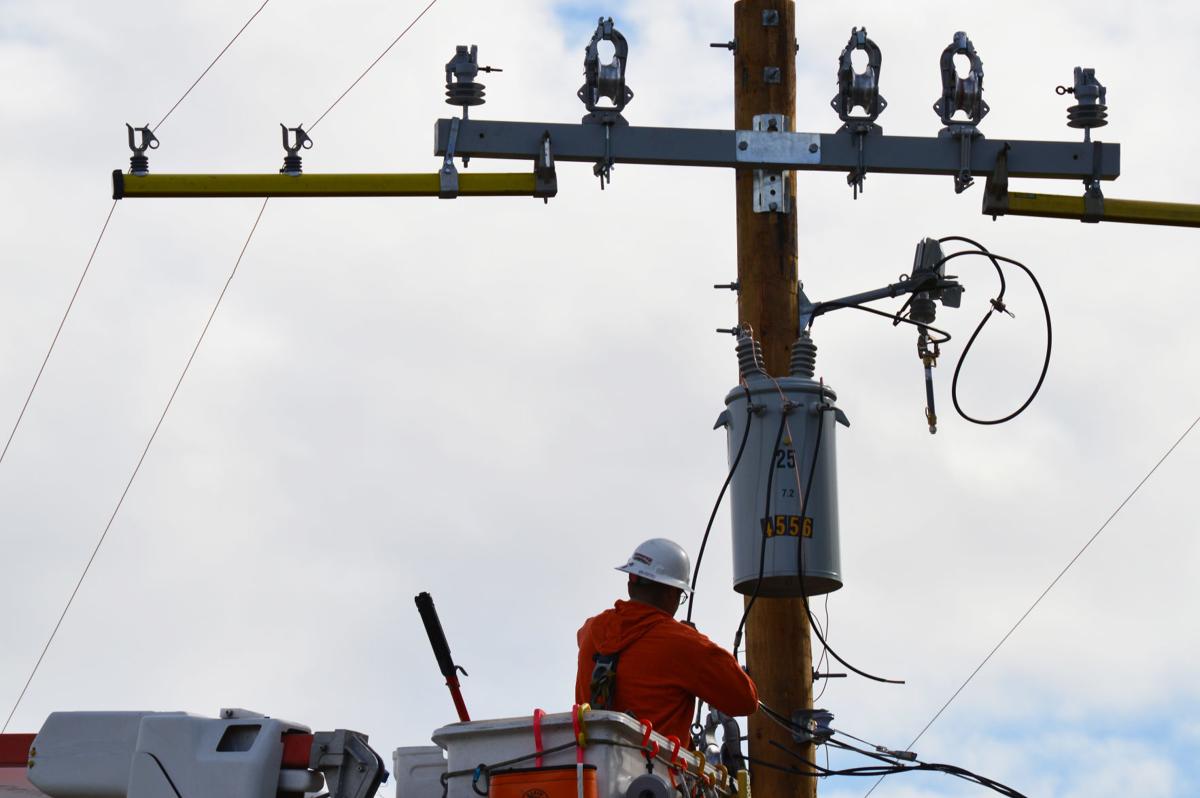 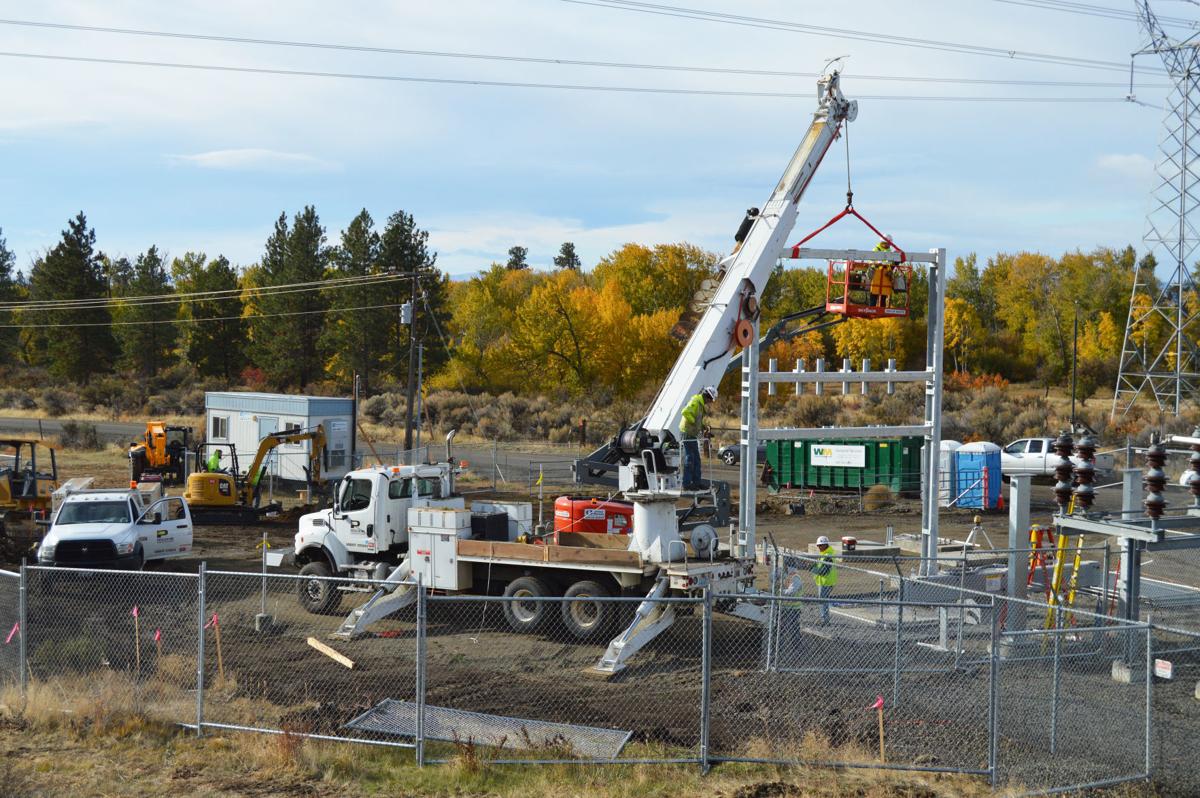 Work is underway on the retrofit of the Jenkins substation in the northeast corner of the valley. The Kittitas PUD expects the project to be complete in late January. 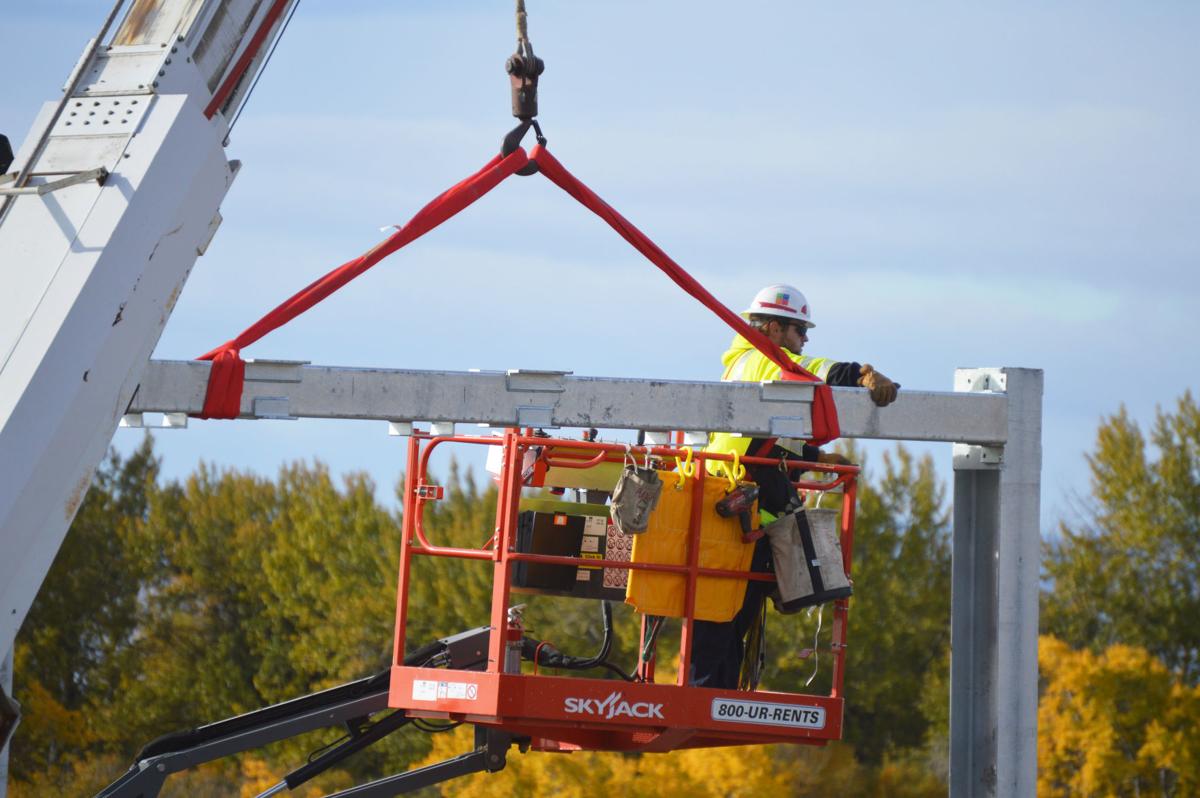 A contractor works on the retrofit of the Jenkins substation in the northeast corner of the valley. The Kittitas PUD expects the project to be complete in late January. 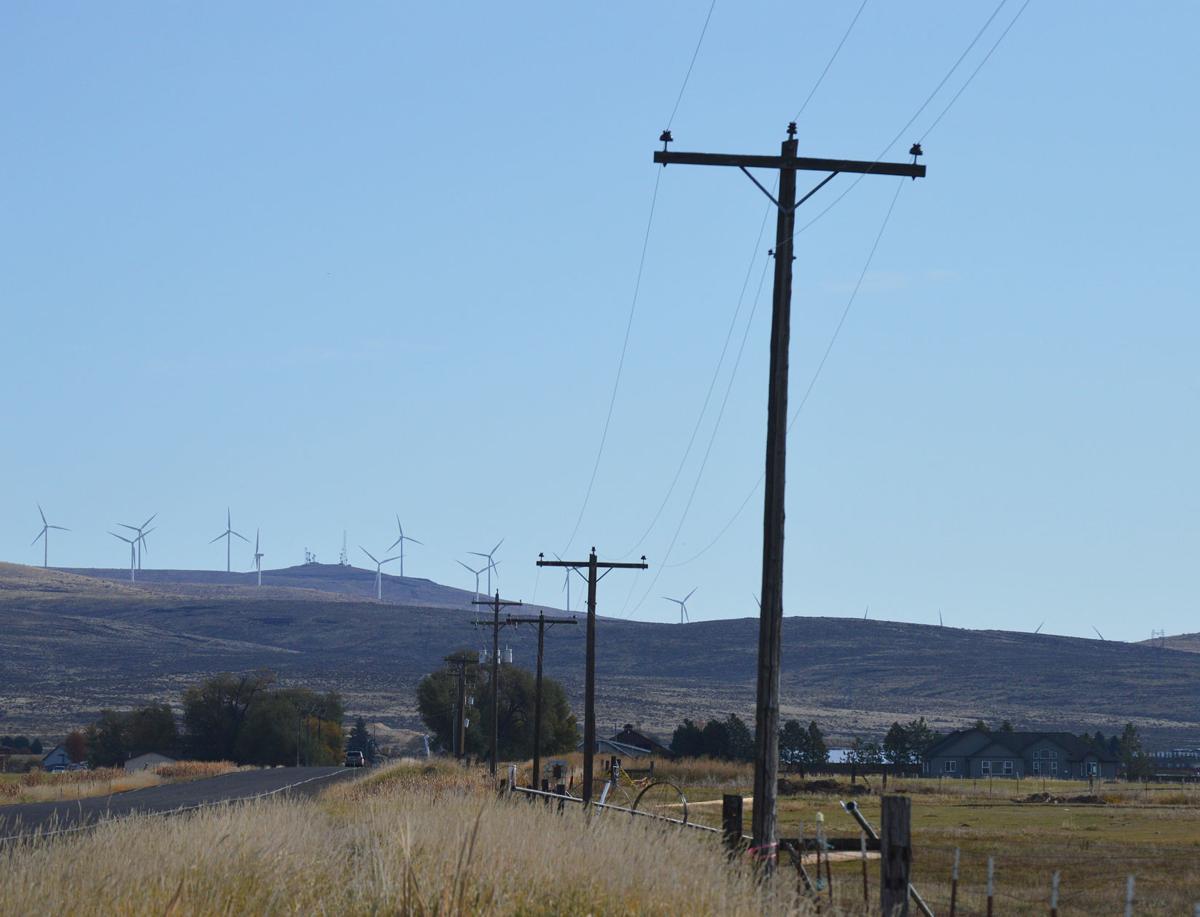 Power lines along the feeder line that connects the Kittitas Valley and Vantage are over 50 years old. Kittitas PUD is undergoing a long-term project to replace the line. 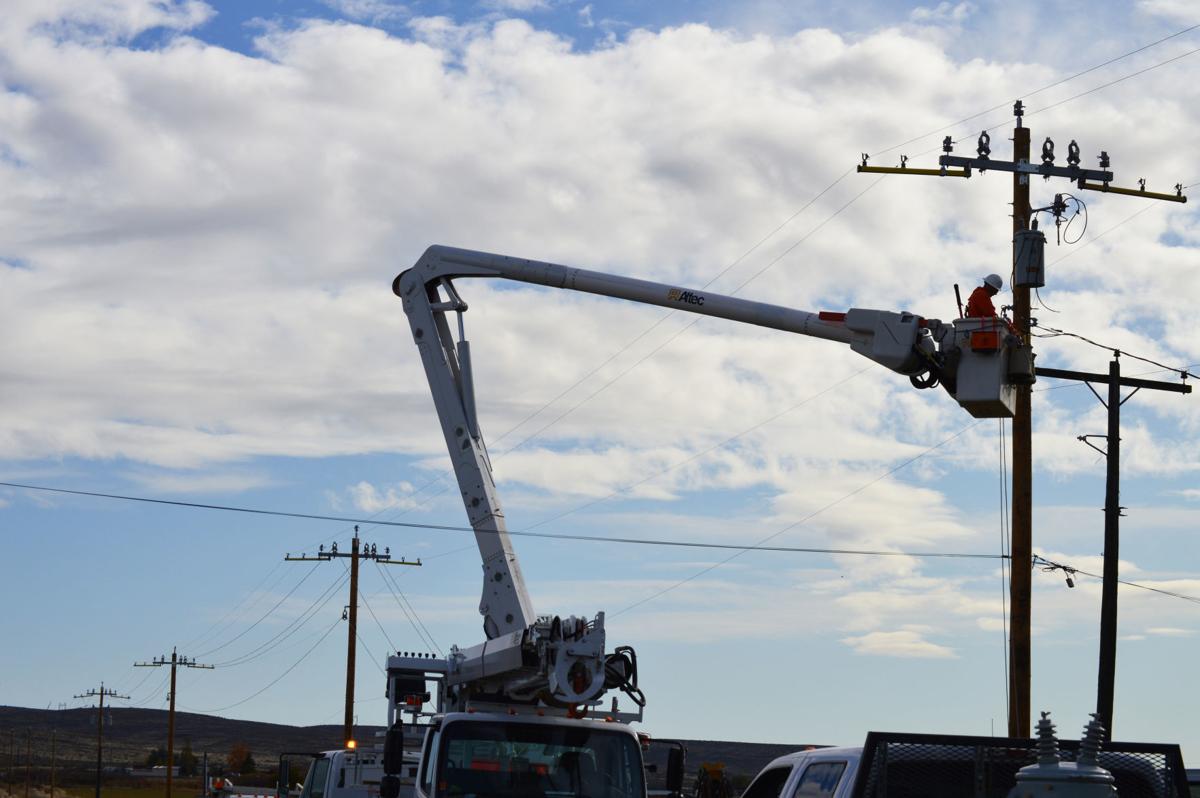 Work is underway on the retrofit of the Jenkins substation in the northeast corner of the valley. The Kittitas PUD expects the project to be complete in late January.

A contractor works on the retrofit of the Jenkins substation in the northeast corner of the valley. The Kittitas PUD expects the project to be complete in late January.

Power lines along the feeder line that connects the Kittitas Valley and Vantage are over 50 years old. Kittitas PUD is undergoing a long-term project to replace the line.

Customers who purchase power from the Kittitas County Public Utility District will be seeing a slight increase on their power bills beginning in November, but if they take a drive through the eastern portion of the Kittitas Valley, they will be able to see a portion of that money being put to good use.

The PUD commissioners approved a 4.99% rate increase at their Sept. 24 meeting, which will be effective Nov. 1. The rate will be split between the “fixed” and “variable” components of each rate class. PUD General Manager Matt Boast said our county is a full requirements customer of the Bonneville Power Administration. Unlike county utilities like Grant County PUD, which produces energy from dams they manage, Kittitas County PUD doesn’t have generation capacity to offset its expenses. As the power load within the county grows, Boast said the BPA supplies that need.

“Some other companies have to go and find those resources,” he said. “They have to go and buy a package of power on the market. We’re a full requirements customer because we’re so small, and BPA just meets our load growth.”

In July 2019, the BPA announced increases to its power and transmission rates for the fiscal years 2020-2021. Boast said rates from the BPA are announced in two-year blocks, and that there is a 6.26% increase in wholesale power rates the district purchases from the administration.

Boast said the district forecasts what its usage will be for the next two years, and then works out a forecast for what that cost will be. Factors that go into forecasting include weather patterns and water years. Weather patterns can help predict energy usage in both winter and summer during years with milder weather, while the water forecast plays into energy availability costs from the BPA’s hydroelectric system. Once those factors are taken into play, Boast said a rate increase is then predicted to cover those costs.

“When we knew about these rate increases, we had planned on a 5% (increase),” he said. “Our forecast ended up being spot on. The forecasting tools we’ve been using and the budgeting we’ve been doing has been spot on, so there weren’t any surprises. If you went back and looked at our forecasting two years ago, you’d see we planned on a 5% (increase) and it’s worked out just perfectly.”

Along with being reliant on BPA cost increases as the sole provider of power for the county, Boast said other factors are at play in the increases, all of which are designed to benefit PUD customers.

“It’s to cover the rate increase that the BPA is doing to us, but the purpose of the rate increase is also because we are aggressively replacing aging system,” he said. “We’ve replaced a lot of miles of line over the last five years, and we’re continuing to be aggressive about that. It’s cost now, but we hope to see the benefit of that in lower outage times, more redundancy and higher quality of power to our customers. There’s investment there in the future.”

The PUD is working on a complete retrofit of the Jenkins substation, located in the northeastern corner of the valley. Boast said the substation is approximately 50 years old, one of the reasons they chose to retrofit it.

“We needed some more capacity,” he said. “We needed to modernize it.”

“That way we could take this one down and make all the repairs and upgrades we needed to and then switch it back to normal conditions when we’re done, so customers don’t see any impact,” he said.

Most of the retrofit at Jenkins is slated to be complete by the end of November. The control house, which controls the devices and metering at the site will be brought in December. Boast said the entire project will most likely be complete in late January.

The site is shared with a Bonneville Power Administration substation that services the Columbia to Moxee line. Although the Jenkins substation was de-energized for the retrofit, the BPA substation could not due to its function, causing a heightened safety challenge for PUD workers. Another challenge to the construction is the placement of electrified powerlines that are situated directly above the site. Boast said this is unique to most substations, where power lines tend to be diverted around them instead of going directly over.

“That creates a little bit of a hazard,” he said. “These guys have to watch overhead all the time.”

Because of the feeder that was built to connect the Smithson and Jenkins substations, Boast said once the retrofit is complete there will be a new system of redundancy between the two sites.

“We basically have a strong feeder tie between the two,” he said. “If something was to happen at Smithson substation or (Jenkins), something catastrophic, then we would have a way to put people back in power. The way (Jenkins) was previously fed to serve all these customers, this was the only transformer serving them. That’s what the PUD has been working for several years is to get that redundancy between feeders.”

Once the retrofit is complete, Boast said Jenkins will have approximately 2.5 times the capacity of the pre-retrofit setup.

“It’s going to have more load-growth opportunity that it can serve,” he said.

Although the PUD is experiencing an influx of residential customers, Boast said the system isn’t overloaded. Along with the goal to create redundancy, he said the other target is to effectively handle the exponential growth in commercial load on the power grid, which has grown from 7% to over 30% of the total user pool. He said most of that industry is the commercial hay export operations in the valley.

“Homes can go without power for several hours and of course it impacts them and it’s frustrating, but there’s not a loss of production,” he said. “If you have commercial load base, they lose money when they don’t have power. There’s a need to have redundancy, to have reliability. The residents will actually benefit because they won’t have to deal with the frustrations of outages with an old system, and they’re benefiting from that commercial base load.”

While driving along a rural road between substations, Boast pointed out bumps on powerlines that resembled miniature footballs. He explained that they were places where linemen had to splice the line, either as a repair from an outage or because lines had to be moved at one point or another.

“The more these sections of wire get damaged, the more important it is to come and replace that with more wire with more capacity, because it’s so susceptible to breaking and fatigue,” he said.

Instead of the traditional power pole structure that has powerlines situated relatively close to one another, modern replacement work utilizes fiberglass arms and polymer clamp ties that are taking the place of the antiquated glass and ceramic insulators. The replacement process is also focusing on covered wires and insulators to reduce the impact of birds getting caught up in the wires.

“We’ve learned that a great majority of our outages are from either trees or birds,” he said. “We’re really making an effort to bird guard stuff.”

Under a 10-year capital plan, Boast said the replacement efforts focus on areas that are experiencing the most outages, while trying to balance the work among the entire system. He said the PUD developed an in-house matrix that lists the number of customers on each feeder line, how many outages each line has had and if they are susceptible to fire.

“There’s multiple categories that give it a higher score,” he said. “If it has the highest score then it would move up on that list. We kind of prioritize feeders that way.”

The PUD is currently placing focus on two replacing two major feeder lines, one of which travels between Jenkins substation south to the Parke substation. Boast said that project has been underway for the last three years and focuses on creating redundancy between those two sites.

“We’ve been strengthening these ties between the two,” he said.

The other project is a long-range effort to replace a feeder line that connects the valley with Vantage. Much of the infrastructure along that line is over 50 years old, using small-gauge copper wire. That project is currently focusing on replacing approximately two miles of line near the Parke substation. Boast said although the PUD can’t afford to replace the entire line to Vantage in one project, focusing on a section at a time will eventually get the feeder line replaced. As the projects underway get closer to replacement, he said every customer within the grid will benefit from the results.

“Obviously these feeders between the substations have more importance than taps off of those feeders to groups of customers,” he said. “Those are important as well, but these main feeders between substations are the backbone of your system. They impact the greatest number of people. On those taps, of course if we have an outage or there’s a pole that gets hit by a car or there’s a tree that comes through one, those (repairs) are going to be made at that time, but where we’re focusing our capital plan is on the backbone.”