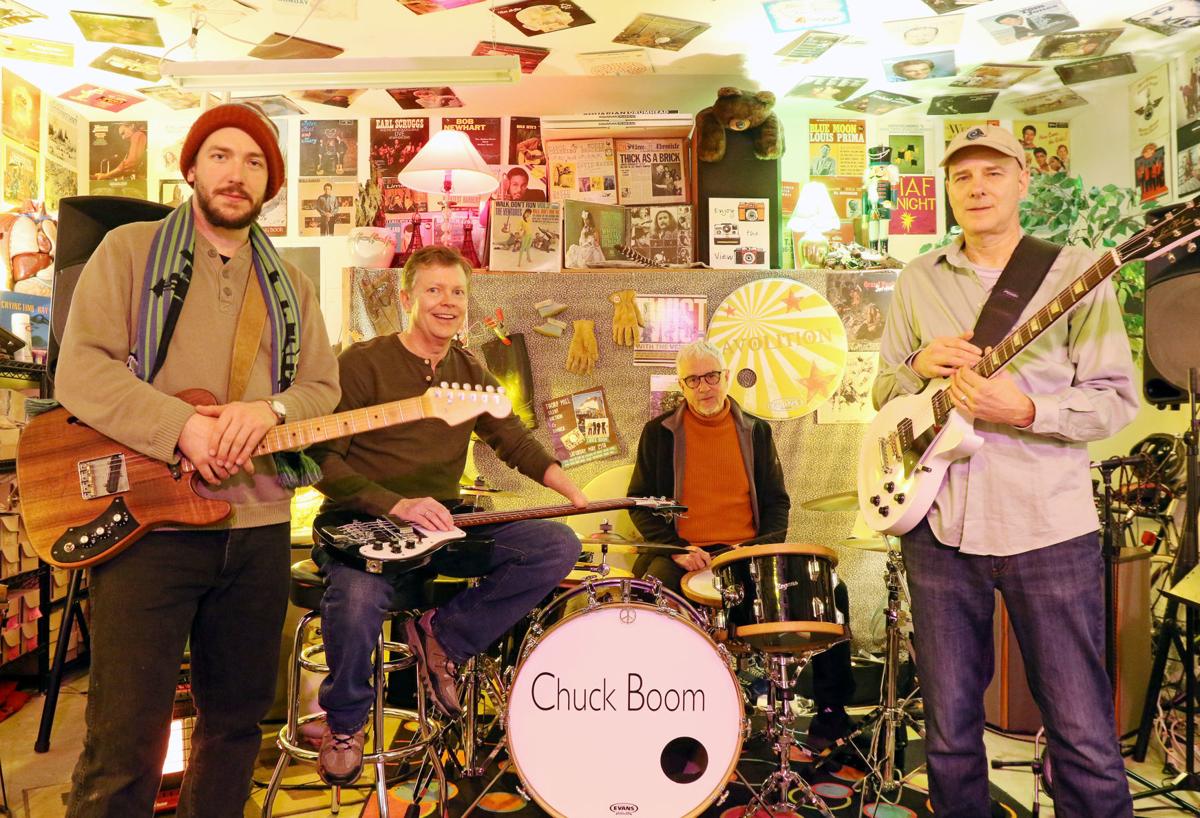 Members of the band Chuck Boom (Kyle Bain, Andy Clemen, Rob Fraser, and Allen Katz) pose for a photo inside their rehearsal studio Feb. 11, in Ellensburg. 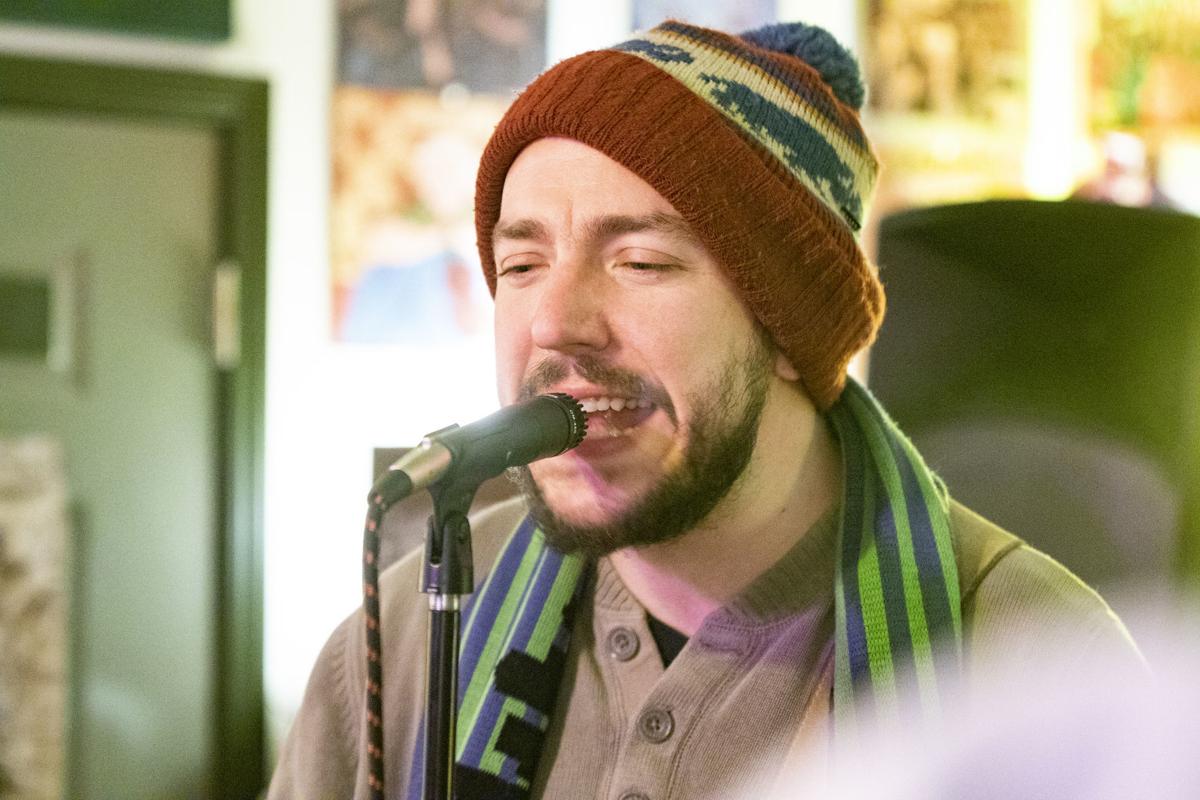 Members of the band Chuck Boom (Kyle Bain, Andy Clemen, Rob Fraser, and Allen Katz) pose for a photo inside their rehearsal studio Feb. 11, in Ellensburg.

The group is complex on several levels — years of experience, level of exposure, musical influence, age — but in the end, it’s the music that drives the bus and they’re all just passengers, like the old-time blues men, laying it down hot, then moving on down the road.

The members of the Chuck Boom band come from three different eras of the Ellensburg music scene. Guitarist Al Kaatz and drummer Rob Fraser played together in 1965 when they were 14 years old. Both graduated from Ellensburg High School in 1969, during the height of the Vietnam War.

Bassist Andy Clemen graduated in 1985 and played with Fraser in a project called Avolition. Singer/songwriter Kyle Bain has been playing in the Kittitas Valley for years, played a little bit with Fraser in a band called Thing Kings.

“We just all went our separate ways. I went off to New York to photograph. Al’s been doing session work, actually played with Bonnie Bramlett and Charlie Musselwhite. The other guys have been doing different projects.

“At this point in our lives, we just all ended up back in Ellensburg and said let’s do this. Kyle writes great songs and we play as many as we can.”

Said Bain, “We all have our separate interests and don’t always have time to get together and work up new songs. We do five or six of mine, but we’re mostly a cover band. I’ve learned more from playing with Al than I have from anybody else.”

Some of Bain’s originals include “Some Days,” “Growing Thin,” and “Eye of the Storm.”

As you might imagine, musical influences are as diverse as the personalities themselves.

“The Beatles did it for me. Ringo put me over the top,” Fraser said. “I saw the Beatles on Ed Sullivan and told myself that’s what I want to do.”

The film ‘Hard Day’s Night’ sent a generation of kids running for the pawn shops and music stores to get a guitar, looking to become the next guitar hero. Kaatz has recorded and performed with the likes of Bo Diddley, Etta James, Mary Wells, Big Mama Thornton and Bonnie Bramlett. His influences are more on the blues side.

“There were a lot of good songs written before the Beatles. My mom had these folk records when she was in college in the ‘40s. Guys like Leadbelly and Josh White. I’d never heard anything like that, and it gave me chills,” Kaatz said. “For me, it was mostly the blues.”

Where the older guys dated themselves with influences like Ringo Starr or Leadbelly, the younger guys were influenced by the stars of their generation.

“I would say Rush. I really wanted to be (bassist) Geddy Lee. I really liked the way he played,” Clemen said.

“Nirvana was pretty big when I was in middle school. Grunge was taking off. But I like other styles. I like The Band,” Bain said.

As they sat in the rehearsal studio at Fraser’s house out on Lenes Road, it was easy to see how they reached deep into the melting pot that is rock ‘n’ roll and blended past and present. The walls weren’t covered with gold records, but they featured hundreds of album covers from the legendary players that helped shape a generation and influence future generations.

There were some more obscure than others, like Jesse Colin Young and Brewer & Shipley. But the legendary work of the Beatles, the Rolling Stones, Bob Dylan and Bob Marley and a slew of others jumped right off the wall, dating back to a time when album cover liner notes was how you learned about the session, the side players and how the music of the day was put to vinyl.

You could listen to the music as you read about your favorite band or singer/song writer and put together your own battle plan and the dream you wanted to chase.

“Looking back on it, I realized learning to play with a handicap (the loss of his left hand at the wrist), has carried all the way into all aspects of my life,” Clemen said. “It’s carried over into my professional life, my personal life. So when I hear somebody say I can’t do that, I say really?

“I learned how to play the guitar with one hand. You just have to really want it, and I really wanted to play, so I figured out how to do it.”

Fraser glanced to an album cover by Nancy Sinatra on the ceiling and smiled. “We actually cover a song by Nancy Sinatra,” he said as if he could hear that classic line in his mind’s eye, “... One of these days these boots are gonna walk all over you.”

Chuck Boom has played anywhere from Jazz in the Valley, the Cornerstone Pie, the Hotel Windrow to venues all around the Kittitas Valley. The are scheduled to play next on April 3 at the Dakota Cafe.

For an update on future dates, visit Chuck Boom Facebook at https://www.facebook.com/search/top/?q=Chuck%20Boom