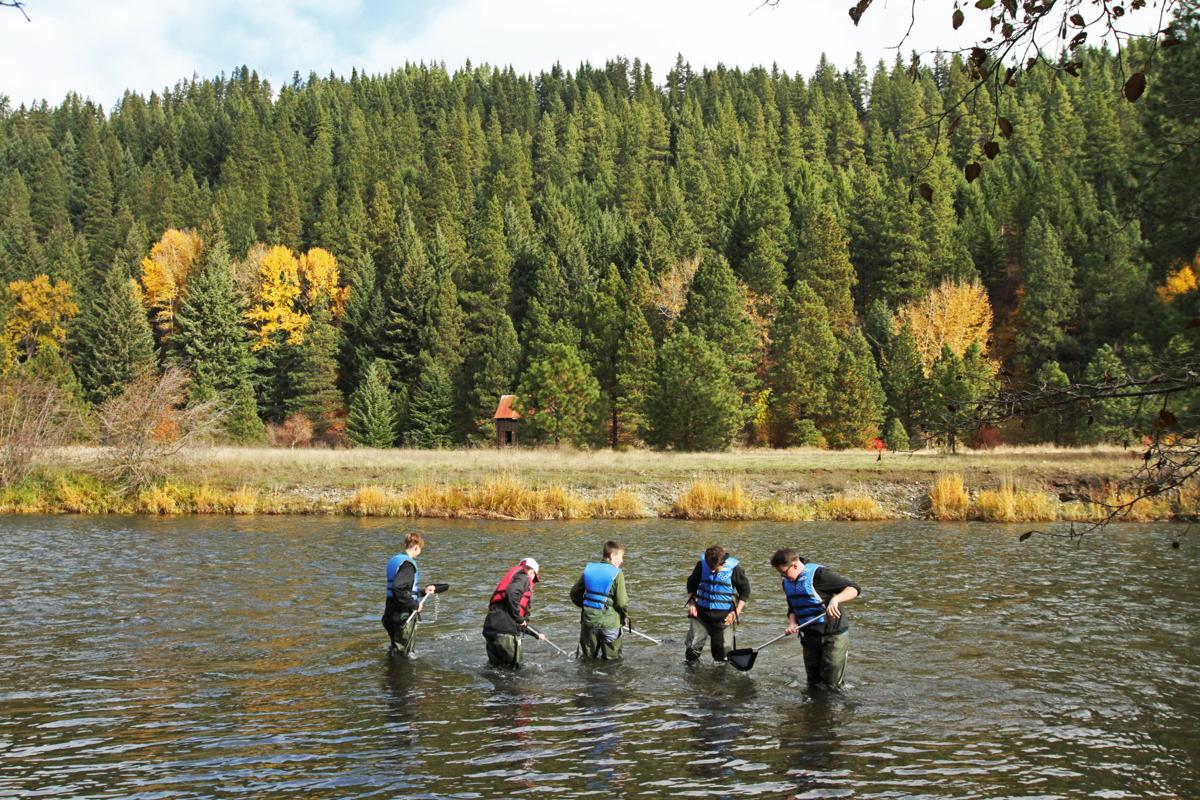 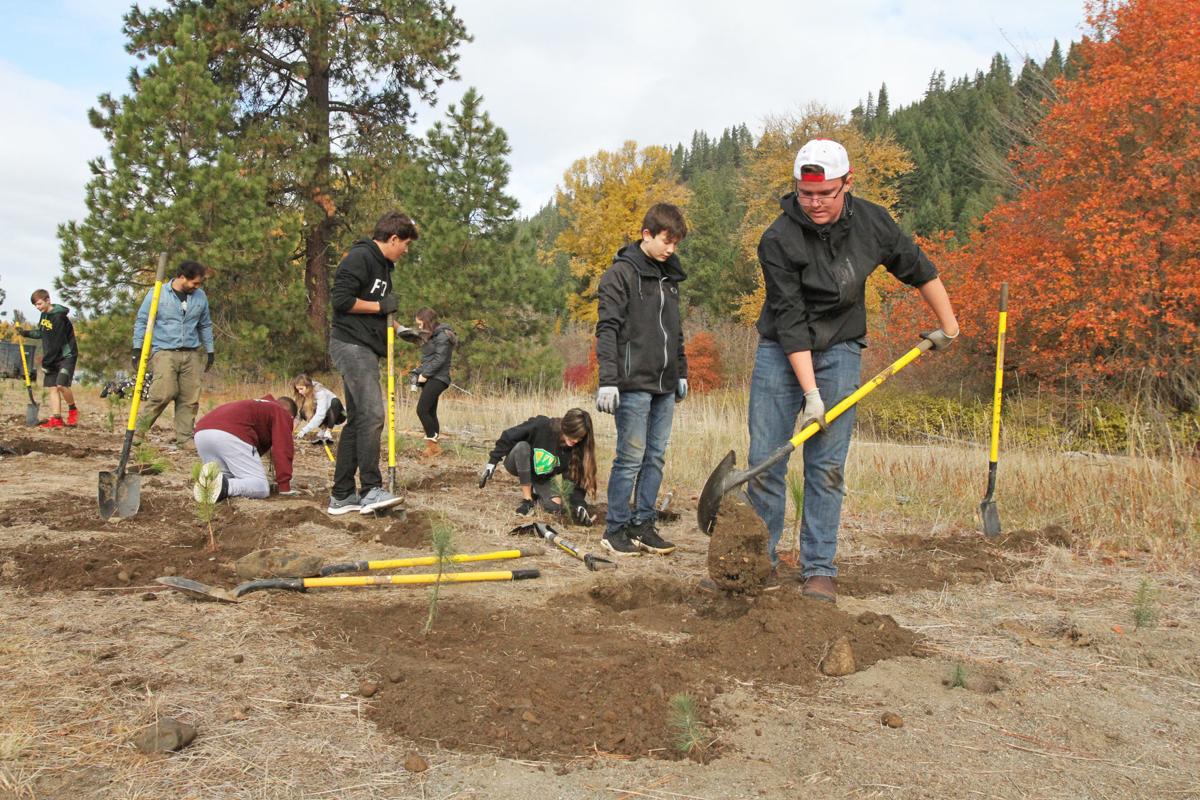 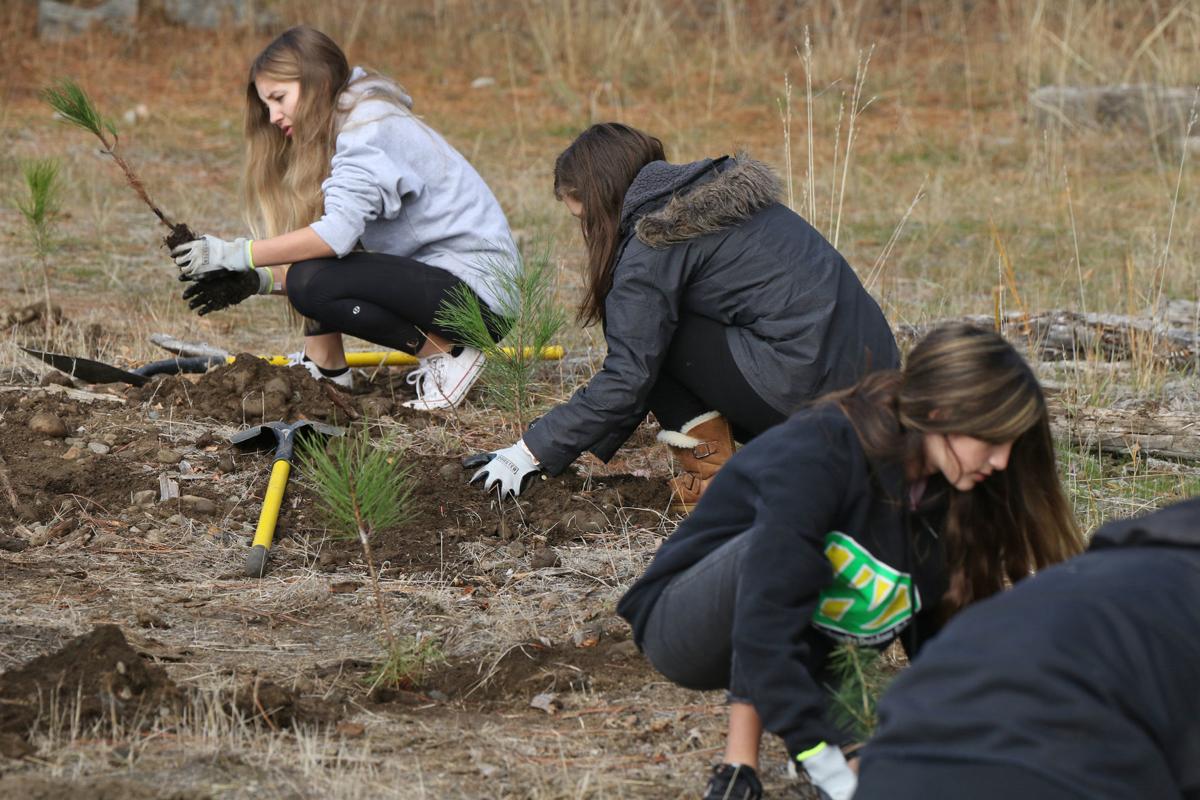 The educational process can be a lot more fun when the classroom is taken outdoors.

Approximately 60 eighth-grade students from Walter Strom Middle School converged on a stretch of the Upper Yakima River in Upper County last Thursday to take part in a multi-year restoration plan taking place on a seven-acre parcel of privately owned land that fronts approximately 3,000 feet of the river. The project is part of a collaboration of groups, including Mid-Columbia Fisheries Enhancement Group, Kittitas Conservation Trust, Kittitas County Conservation District, Washington Department of Ecology, Yakama Nation and the private landowner.

Students had the chance to get their feet wet taking stream measurements and their hands dirty planting trees during their experience at the site. Mid-Columbia Fisheries Enhancement Group Stewardship Coordinator Landon Schaffer said the goal of the educational component is to give students a sense of what a restoration project entails. Students were assigned to plots of land where they took measurements of plant height and counted plant species to measure diversity.

“Around these plots, they’re taking transects so they’ll get what type of vegetation diversity existed on the site before we planted it,” Schaffer said. “By taking those types of data, we’re going to have the kids come back in the spring and the fall and they’re going to continue to do these measurements in the same areas. By monitoring how much they grow every season and with count changes over time, we can see how well the project is doing.”

Schaffer said the students really enjoyed the river component, where they were able to examine sediment composition and see the diversity of macroinvertebrates in that stretch of river. He said the opportunity to bring students outdoors to engage in learning brings out a different side of them not seen in a conventional classroom.

Schaffer said the other benefit of getting the students outdoors is that it engages them to help understand the environmental issues that surround where they grow up.

“I think stewardship and volunteerism is a huge part of any community,” he said. “The more you participate in these areas, the more you just have a sense of commitment to having natural areas.”

As the plan took shape, she said Ecology became interested due to numerous impairments and water quality issues downstream, such as issues with water temperature and sediment, as well as chemicals in the water that are putting human and aquatic life at risk.

“It’s a really important place to work for a number of reasons,” she said. “From satellite imagery, from a riparian forest perspective, this area sticks out like a sore thumb. It’s a great opportunity to restore a removed riparian forest.”

Strathmann said her organization’s interest in the project overlaps with that of the other agencies, in that the goal of the project is to enhance water quality.

“Clean water is good for fish,” she said. “Having riparian habitat is good for fish. The forest holds the banks together, so having dense fibrous roots in the banks slows down erosion so there’s less sediment moving into the river.”

A healthy riparian forest also helps capture surface flow, which can aid a floodplain habitat during high-flow precipitation events. Strathmann said the project will also create shading along the banks of the river, which will help lower water temperatures in the river which in turn aids healthy fish passage.

“The Yakima River is quite wide, so there’s virtually no area where you’ve got 100% canopy,” she said. “Those bank shading areas are really important.”

Another benefit of the restoration process is that in time, it will create woody debris in the river once the trees that are planted mature and eventually die, which will also benefit the overall habitat in the future.

The students spent their day planting 100 ponderosa pine and Douglas fir trees. Strathmann said those species account for roughly half of the 4,800 total plants going into the restoration process on the property. Other native species included in the planting including Oregon grape, chokecherry and Douglas hawthorn. The pine and fir trees were specifically chosen for the area because they are more tolerant of dry soil, which she said is ideal in that their planting location is approximately 10 feet above the low water level.

“While the soil is moist because it’s fall and it’s been raining, in the summer and early fall you’ve got groundwater that’s eight feet down,” she said. “You want to plant species that can tolerate drought conditions.”

After the planting is complete, Strathmann said more work needs to be done to ensure the restoration takes hold. Weed control and irrigation efforts will continue for the next couple years, and other measures will be taken to ensure its success including the construction of an elk fence. For a project of this magnitude to take root, Strathmann said it generally takes a minimum of three years of ongoing maintenance.

“Revegetation is not a construction project where you install your project and walk away,” she said. “It’s expensive, and I think that a lot of people forget that you can’t just put a plant in the ground and walk away. You need to care for them to get them established, and then you have reasonable survival.”

Across the river from the riparian restoration project, Kittitas Conservation Trust Executive Director Mitch Long pointed out a series of side channels that were created over the course of the summer. In theory the channels already existed but were disconnected from the current path of the river. By rehabilitating and reconnecting them to the main stem of the river, Long said they will provide more refuge for aquatic species, especially salmonids. He said the hope is that they will also expand wetland areas during high river flows, another habitat benefit.

“Adding these channels create slower water and the habitat those rearing fish like to be in,” he said. “We have a lot of spawning activity that happens in this reach, but not a lot of fish. Those fish basically get flushed down and go they elsewhere, so we want to put those fish into places like these side channels so they can actually rear and then move downstream to the ocean when it’s time for them to do so.”

In order to direct water into the side channels, Long said logjams were placed in strategic areas near the channel entrances, as well as woody material being placed within the channels. The channels, which measure approximately 1,000 and 1,500 feet respectively were excavated over a three-week process so that they could successfully receive waterflow. Long said the goal is to get water into the channels during low-flow periods when the upstream dams are holding water in reservoirs.

“We have had some good rain in the last week and a half or so,” he said. “We have seen some increased inflows because of the tributary inputs and those side channels are really looking good. We’re really happy with the way they’re flushing out.”

With increased human development and the impact that comes from it, Long said healthy riparian habitats can filter unhealthy runoff that comes from roads, agricultural and residential areas. Although this project had the benefit of being sited on a large tract of undeveloped land, he said projects have also been developed with smaller landowners that provide similar benefits.

“I think there’s plenty of opportunities elsewhere in the basin to do this type of work, whether it be on the mainstem Yakima or tributaries,” he said. “Doing similar things like riparian revegetation and trying to provide these buffer zones between the river, the floodplain and the private property so we’ve got these lush riparian and wetland ecosystems that can actually absorb the different things we don’t want in the water that comes from everyday living.”