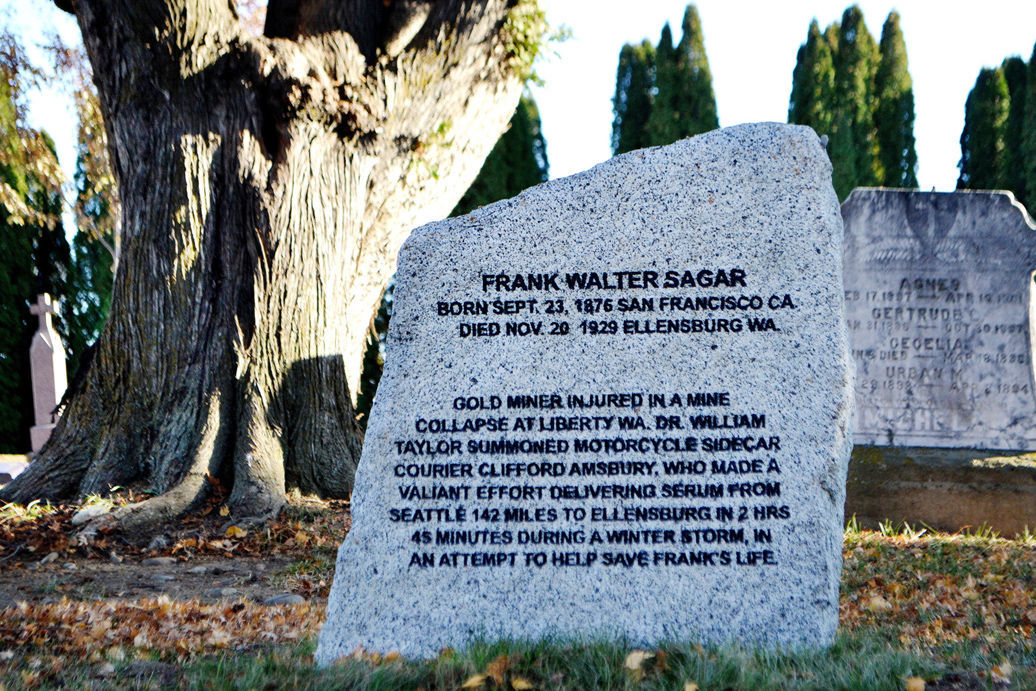 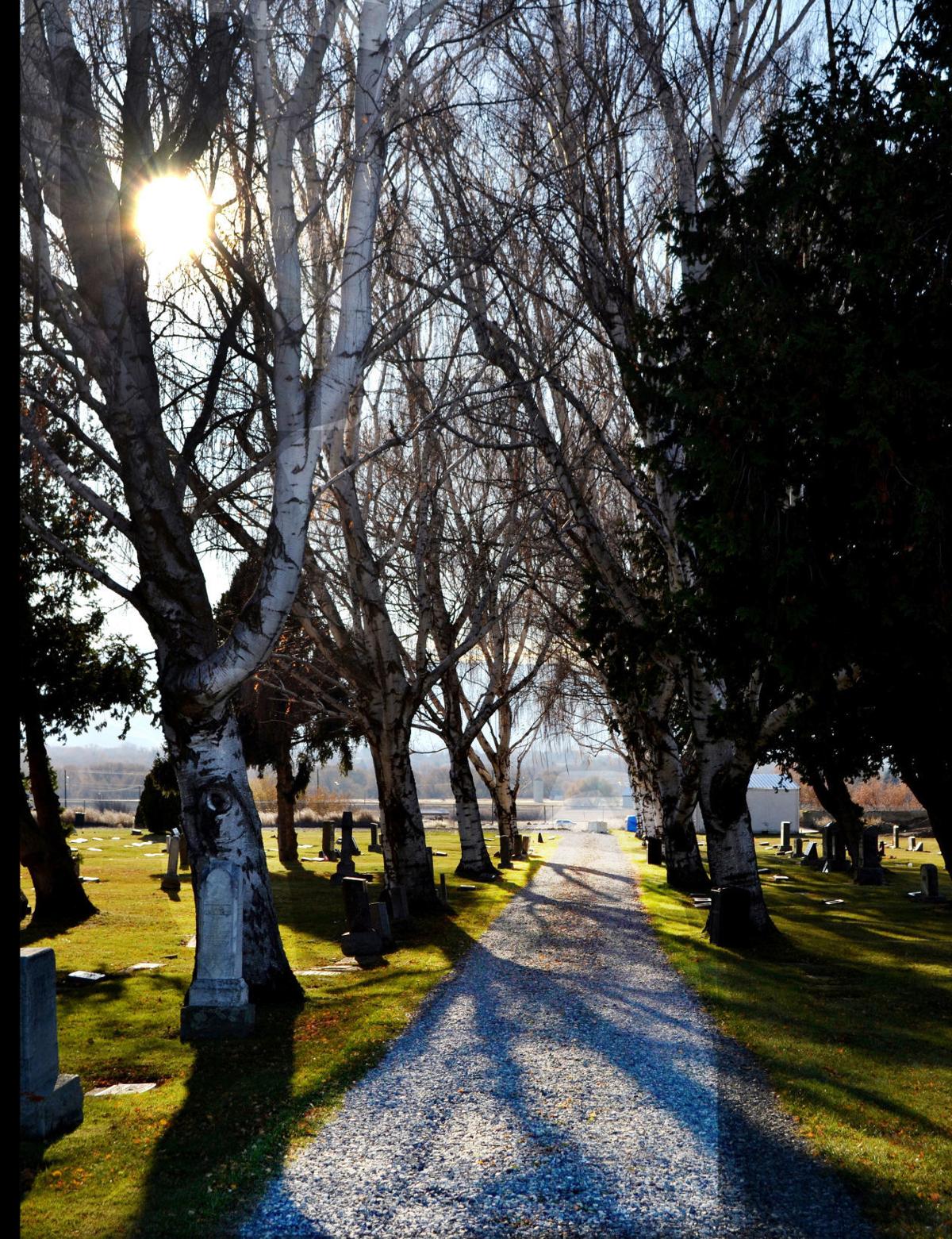 The Holy Cross Cemetery on Dry Creek Road in Ellensburg is the final resting place of many, including  53-year old gold miner Frank Walter Sagar, who died of a blood infection in 1929. 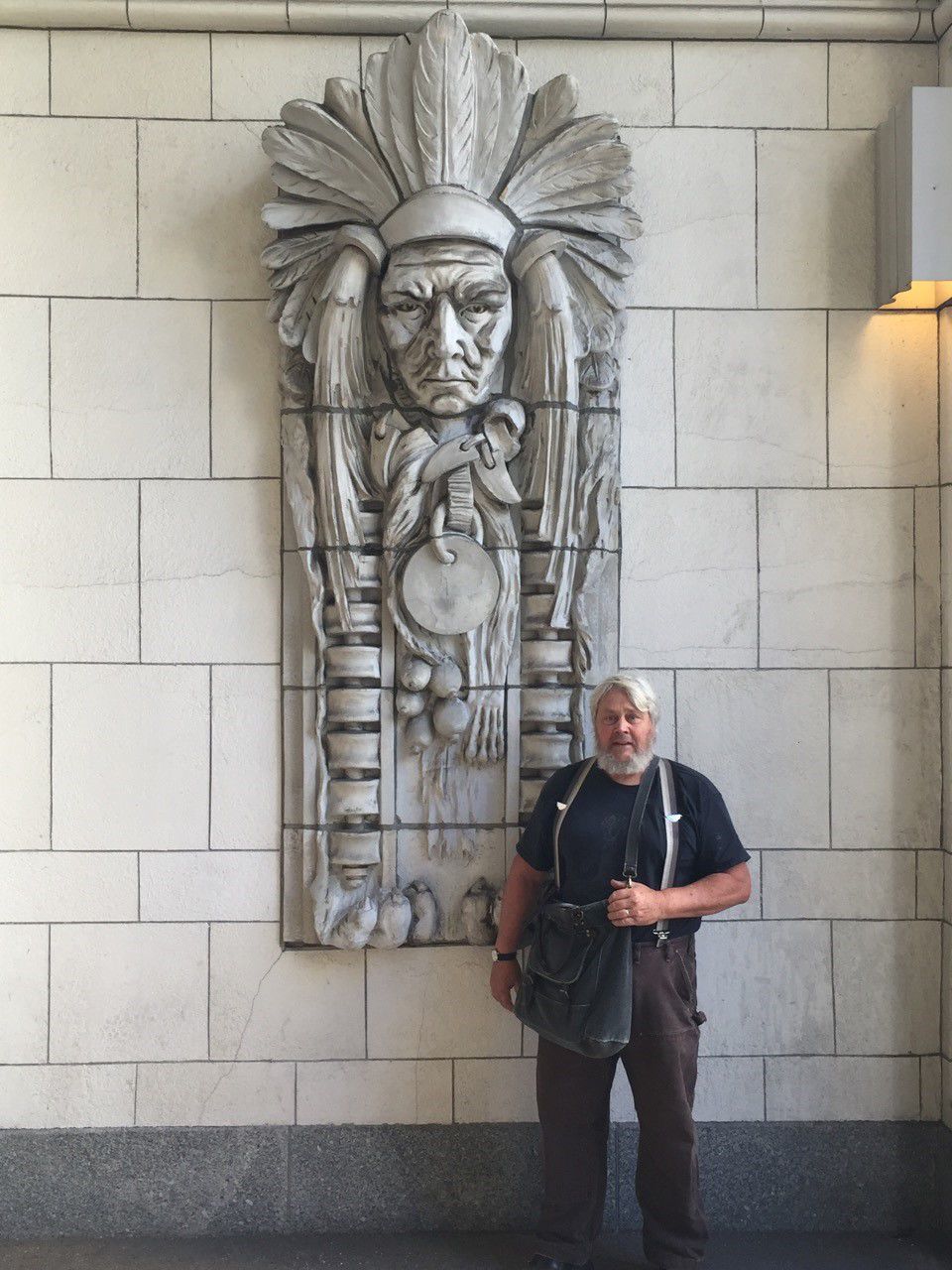 The Cobb Building in downtown Seattle still stands. Reenactment ride organizer Thomas Samuelsen made a recent visit to where the epic ride began in 1929. 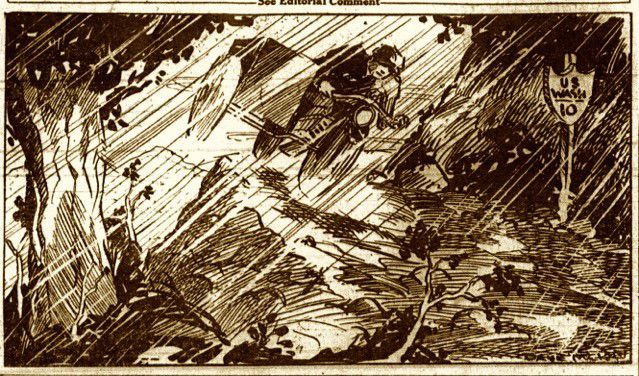 This rendering ran in the Seattle Post-Intelligencer Nov. 17, 1929. 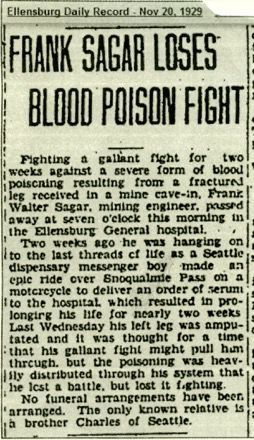 This 1929 article from the Ellensburg Daily Record is the story reporting the death of Frank Walter Sagar.

The Holy Cross Cemetery on Dry Creek Road in Ellensburg is the final resting place of many, including  53-year old gold miner Frank Walter Sagar, who died of a blood infection in 1929.

The Cobb Building in downtown Seattle still stands. Reenactment ride organizer Thomas Samuelsen made a recent visit to where the epic ride began in 1929.

This rendering ran in the Seattle Post-Intelligencer Nov. 17, 1929.

This 1929 article from the Ellensburg Daily Record is the story reporting the death of Frank Walter Sagar.

The decorative cross above the iron gate just down the way from the entrance gives a sense of comfort to visitors and families of those inside, in their final resting place, in a humble cemetery where a person can see as far as the eye can see.

The treelined roadway into Holy Cross Cemetery out on Dry Creek Road catches the glistening light of the sun as it sets in the west, giving a sense of tranquility as the birch leaves gently rustle in the chill of a November autumn in the Kittitas Valley.

Down the way, a mere 50 steps from entrance No. 1, is a grave that evolved through a sense of urgency, one of little recognition, one whose story, whose spirit, is being kept alive some 90 years after the time of death.

Until two weeks ago, the grave of 53-year old gold miner Frank Walter Sagar was identified by a simple cinder block embedded in the ground saying that he was born Sept. 23, 1876 in San Francisco and died here in Ellensburg Nov. 29, 1929.

The man, the story, and the legacy laid covered up in the shadows of a towering, age-old tree with golden leaves blowing across the well kept terrain of the humble, yet appropriate final resting place.

Sagar’s story is connected to two men: One who made a valiant effort to save his life in 1929, and another here in the 21st century making a valiant effort to keep his story and his memory alive 90 years after that tragic day when Sagar succumbed to injuries sustained in a mining accident in Liberty.

“He was just a hard workin’ guy, tryin’ to make make it in this world. Frank was basically a wanderer, chasin’ the dream of hitting in rich in the gold mines,” said Pacific Northwest Museum of Motorcycling curator Thomas Samuelsen, whose group was responsible for the headstone and a glimpse into the lives of two men and their story.

“Miners were injured and killed all time. It means a lot to me to see to it that their story is kept alive and his final resting place properly marked.”

Long before Marlon Brando made the “Wild One” or James Dean became the “Rebel Without a Cause,” there was a real guy starring in a real-life drama.

Samuelsen, an avid motorcycle enthusiast, came across the day (Nov. 6, 1929) when 24-year-old motorcycle courier Clifford Amsbury left Seattle’s downtown Rubenstein Pharmacy in the Cobb Building on Fourth Avenue and rode at break-neck speed with a serum needed to save Sager’s life.

“The story ran across the country. The Seattle Star headline read, ‘Cyclist in Death Dash, speeds over the Cascades with Serum,’” Samuelsen said, with just a hint of admiration in his voice about the efforts of one man’s attempt to save another.

“It’s important to know who these men were and this story about risking all to help someone else.”

As the story goes, with the discovery of gold in Swauk Creek in 1873, Liberty was one of several gold-mining camps that sprang up and over the years, Sagar was one who came to seek his fortune. But there was a cave-in near Blewett Pass and the 53-year-old’s left leg was crushed.

He was taken, some 12 hours later, to the newly constructed Ellensburg General Hospital where he was under the care of Dr. W. A. Taylor, who treated the severe gangrene infection that had developed.

Where in the 21st century where text messages go global instantaneously, 1929 marked the end of the Roaring Twenties and ushered in the Great Depression with the crash of Wall Street. Dr. Taylor circulated word that he needed poly-anaerobic antitoxin in hopes of saving Sagar’s life, and as it turned out, the only serum was in Seattle.

Winter weather had grounded all air travel, Snoqualmie Pass was in the midst of a winter blast, yet Amsbury jumped on his motorcycle with a sidecar and left downtown Seattle heading toward North Bend on Highway 10.

“It’s not like today on I-90,” Samuelsen said. “We tried to retrace the ride a few years ago and some sections are dirt. He rode across Snoqualmie Pass, across the western slope of the Cascades through snow-lined roads, and down the rock-edged eastern side.”

Amsbury, traveling at speeds of 50-to-70 mph, made the 100-plus mile trip in 2 hours and 45 minutes. The serum he carried extended Sagar’s life 10 days. But the miner, whose leg was eventually amputated, left this world at 7 a.m. on Nov. 20, 1929. As it turned out, Amsbury, who still worked at Rubenstein’s Pharmacy, died less than two years later from Lobar pneumonia. He was just 27 years old.

But the story lives on.

A group, sponsored by the Kittitas County Historical Museum, the Pacific Northwest Museum of Motorcycling and the Vintage Motorcycle Enthusiasts, will reenact the 90th anniversary of the Ride for Life in 1929 on Saturday, making that epic journey, traveling as much of the old roadways as possible, to Ellensburg to pay tribute to two men — the bond of the open road — and one man’s journey over the pass in the middle of winter.

“We won’t be going nearly as fast,” Samuelsen said with a laugh.

Cornerstone Pie in Ellensburg still has the original doors and some interior furnishings from the General Hospital from that time. Following a dedication at Frank Sagar’s grave at Holy Cross Cemetery at 1:15 p.m, they’ll head down to the pizza parlor at 2:15 p.m., entering the restaurant through the same doors of the General Hospital that swung open 90 years ago with the precious serum.

At 3:15 p.m. — the exact time of Clifford Amsbury’s entrance — they’ll toast a glass to a life well lived and an epic journey to make a difference in a world where the Great Depression was going on all around.

The engraving on the Sagar headstone was prepared by Rick Oswald at Cutting-Edge Glass Studio. The group hopes to raise money for a headstone for Amsbury’s gravesite, which remains unmarked in a North Seattle cemetery.

Here’s to Frank and Clifford, whose journey is not forgotten.

What: Reenactment of the 90th anniversary of the Ride for Life in 1929

Schedule: The ride will start at 10:30 a.m. at the Black Dog Café in Snoqualmie; using as many of the original roads as possible.

Around 1:15 p.m., gather at Holy Cross Cemetery off Old Highway 10 for the dedication at Frank Sagar’s grave. At 2:15 p.m., arrive at Cornerstone Pie through the same doors of the General Hospital that swung open 90 years ago with the precious serum.

At 3:15 p.m. (the exact time of Clifford Amsbury’s entrance) give a toast to the men and this epic ride.