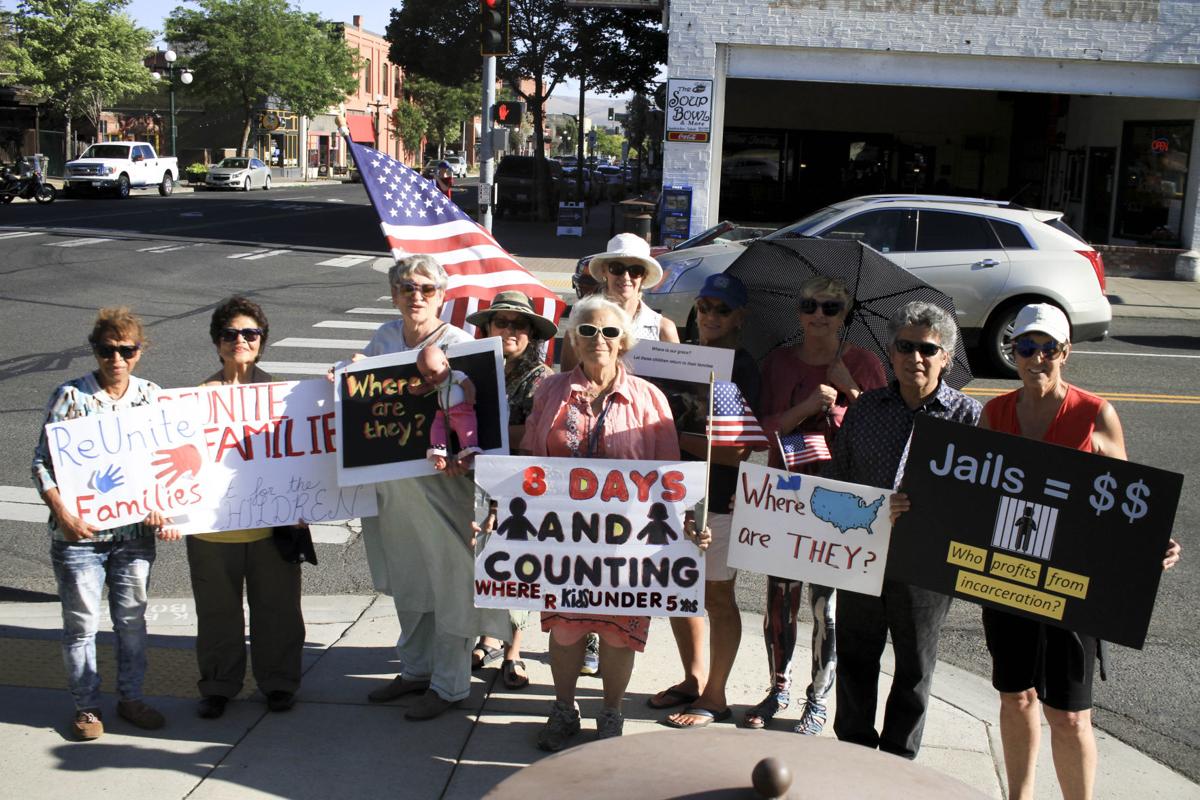 Protests outside of the Ellensburg courthouse continue as the government works to reunite families that were separated when crossing the U.S. southern border. Ralla Vickers, who began the protests in mid-June, said she will continue until the July 26 deadline for the reunification of all eligible families. 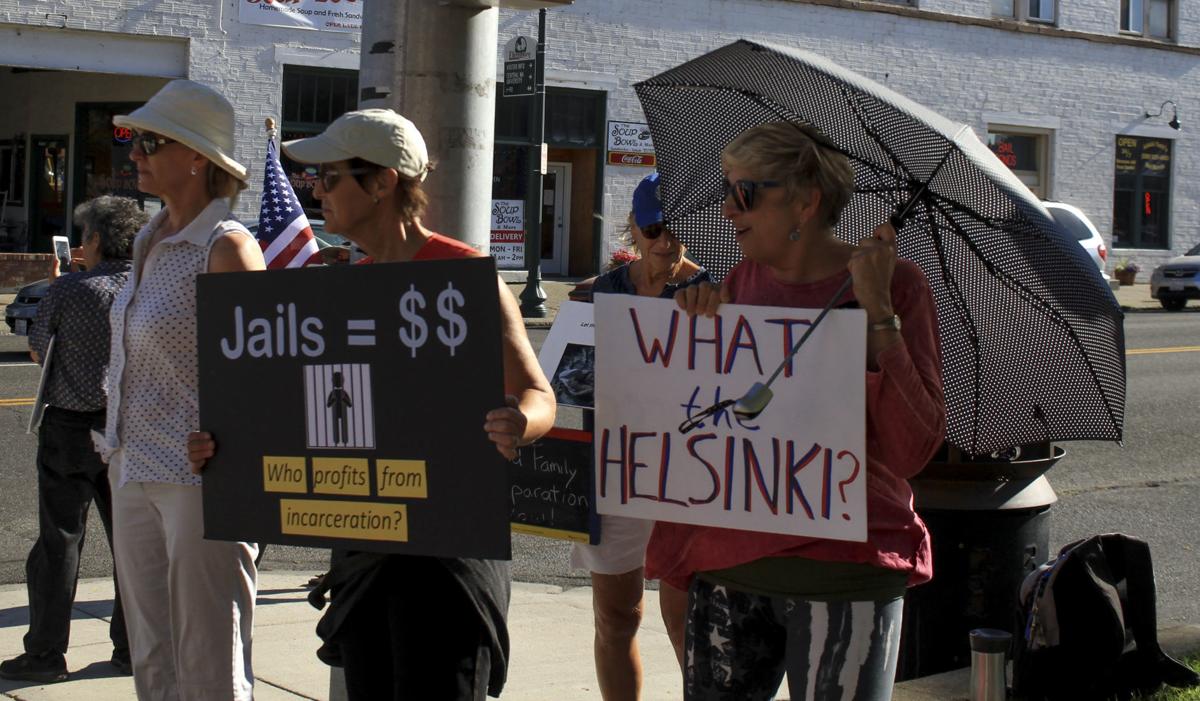 People protest U.S. immigration policy outside of the Ellensburg courthouse. 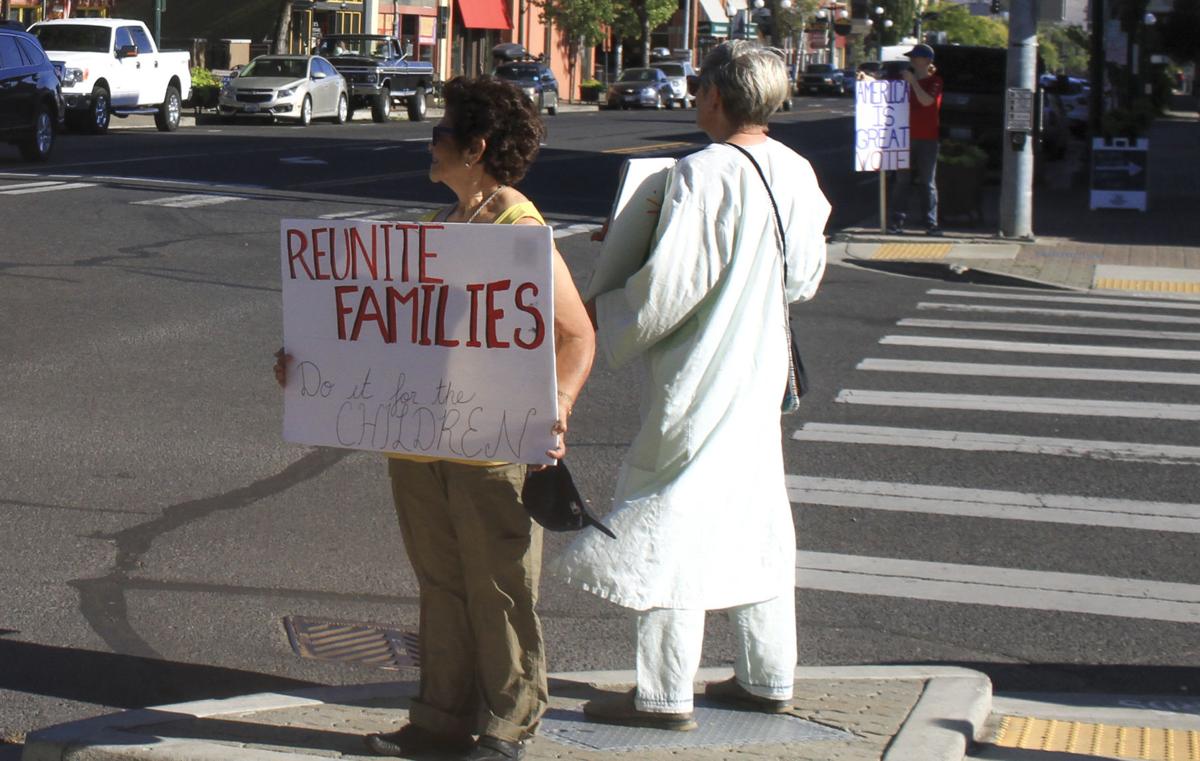 Several protesters hold signs on the corner outside the Ellensburg court house on Thursday.

Protests outside of the Ellensburg courthouse continue as the government works to reunite families that were separated when crossing the U.S. southern border. Ralla Vickers, who began the protests in mid-June, said she will continue until the July 26 deadline for the reunification of all eligible families.

People protest U.S. immigration policy outside of the Ellensburg courthouse.

Several protesters hold signs on the corner outside the Ellensburg court house on Thursday.

Daily protests that began in mid-June are still happening outside the courthouse in Ellensburg.

Ralla Vickers, a local resident, started the vigil after learning more about the controversy relating to the separation of children from their families when crossing the southern U.S. border.

The group stands holding signs from 5 to 6 p.m. every week day. Vickers, and the people who stand with her, are there to bear witness and serve as a reminder, she said. She doesn’t want this problem to be forgotten or for it to be swept under the rug while there are still families that need to be reunited.

“I did not want these children and families to be forgotten,” Vickers said. “Somehow, I wanted them to know that we’re with them and that we support them.”

The separation policy caused public outcry and at this point, President Donald Trump has backed away from a “zero tolerance” policy that led officials to separate more than 2,000 children from their parents as they tried to enter the country illegally. Most were fleeing violence, persecution or economic collapse in their home countries, according to the Associated Press.

Reunification efforts by the government have successfully reunited a large portion of the families, but there are still some children that have yet to be reunited with their families.

The vigil has gained support as time goes on, Vickers said. She’s now seeing an average of 10 people turning out everyday to stand with her.

“I find that remarkable,” she said on Thursday.

Vickers said that she will continue to protest until July 26, the deadline that has been set for the government to reunify all eligible parents with their children.

In the last week or so, a different perspective has made an appearance.

Local resident Nancy Shuda has been spending her afternoons standing on the corner across from Vickers’ group, holding a sign that says “keep families together, enter legally.” On Thursday, she had a new sign, which read “America is great, vote” on one side and “drain swamp, vote,” on the other.

“I’m taking a different perspective,” she said of her actions, saying that if immigrants enter legally than they won’t be separated.

She grew up in a border state and said that immigration has been a long standing problem in the U.S.

“I really think Congress needs to get with it and fix immigration,” she said. “It’s been a problem ever since I was a kid.”

She doesn’t know exactly what could be done to fix the system, but the current one obviously doesn’t work, she said.

“There’s some really lovely (immigrants) here and it’s not their fault … All I know is I want it fixed, and I think America wants it fixed.”

In contrast to the group on the other corner, Shuda stands alone. That doesn’t mean she doesn’t have support, though.

“A lot of people give support on the QT,” she said.

They’ll wave, honk or tell her thank you while they walk past, she said. She has also been asked if she would like people to stand with her.

“I’ve said they don’t need to,” she said, adding that she thinks people are hesitant to join her. “I think it’s because it’s a small town and people are afraid to cause problems.”

She believes in her stance and will stand alone as long as she needs to, she said. She plans to continue as long as Vickers’ group does.