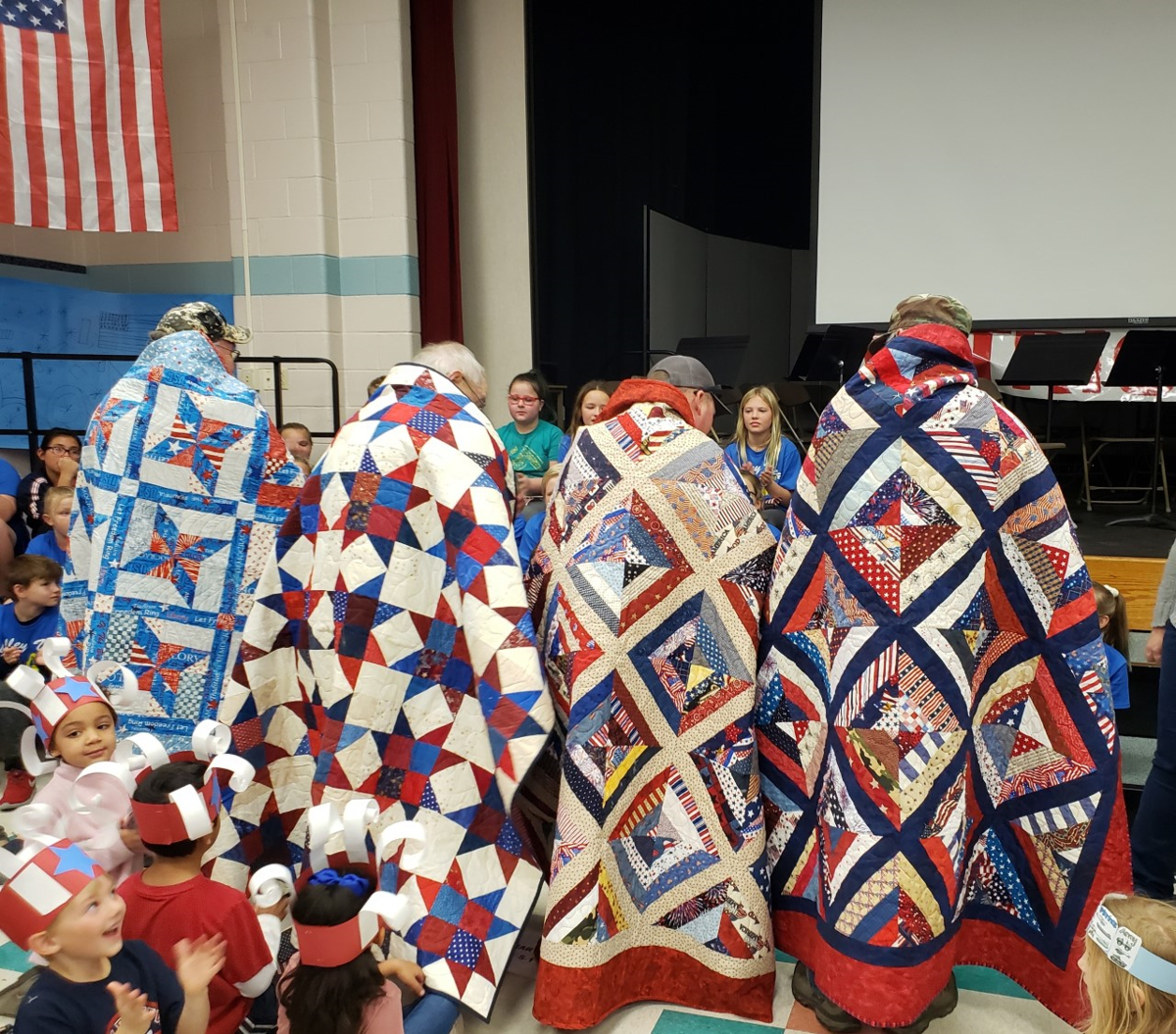 Members of the United States armed forces accept a handmade quilt by Quilters in the Valley as part of the Quilts of Valor Foundation program thanking them for their service. 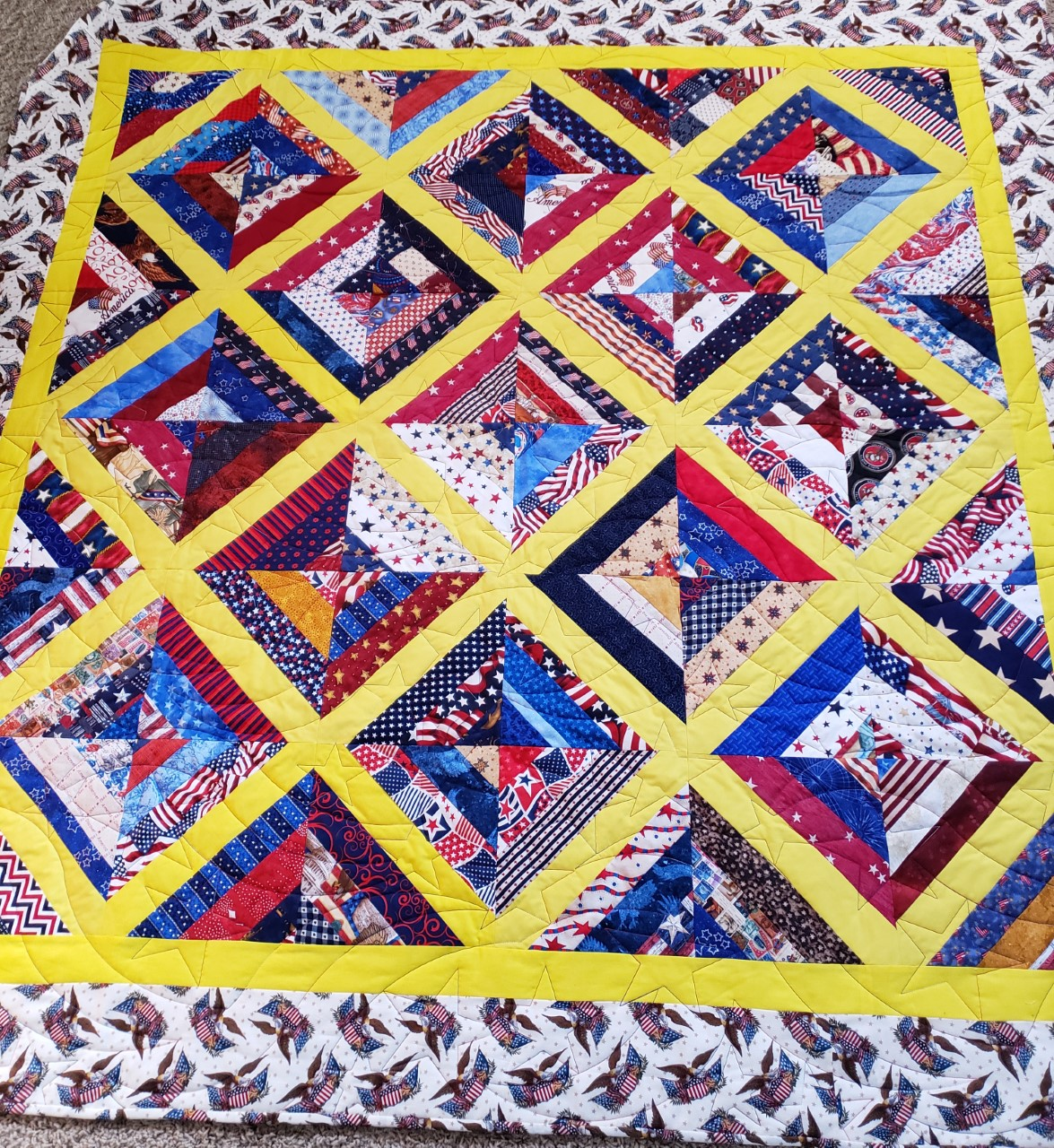 This one of the quilts made during the 24-hour sewing session by Quilters in the Valley organization as part of the Quilts of Valor Foundation national program to pay tribute to U.S. military veterans.

Members of the United States armed forces accept a handmade quilt by Quilters in the Valley as part of the Quilts of Valor Foundation program thanking them for their service.

This one of the quilts made during the 24-hour sewing session by Quilters in the Valley organization as part of the Quilts of Valor Foundation national program to pay tribute to U.S. military veterans.

From a monetary gain perspective, the quilts they handcraft cost around $500 when they’re completed. But the mist in the eyes or the humble gratitude in response to someone saying, “Thank you for your service,” is priceless.

That is the purpose of Quilts of Valor Foundation, an international foundation which has distributed an estimated 240,000 quilts to U.S. military veterans since 2003. A Kittitas County group, Quilters in the Valley, is gearing up for its second 24-hour sewing session Jan. 31 at the Ellensburg Presbyterian Church and is putting the word out to anyone who wants to participate.

“Quilts of Valor Foundation has sponsored an eight-hour Sew Day for the past five years or so. We are the only known group to sew for 24 hours,” spokesman Kathy Cruse said. “Last year was our first year, we added some hours to the event, sewing for 30 hours.

“We had a lot of quilters, obviously, but we had representatives from the fire department and some others. They came and sat at sewing machines and learned how to sew or assist somehow in the process.”

Quilters in the Valley produced around 50 tops, the decorative top layer, which they later add padding and a backing. The distribution process is done by nominating a local veteran, in this case from Kittitas County, through the Quilts of Valor Foundation (www.qovf.org) and the local organization distributes the product.

“We tend to work with a family member or local organization on recipients and we kind of sneak up on them and surprise them,” Cruse said. “I tell ya what, when you wrap a quilt around a veteran’s shoulders it’s so amazing. You get tears and thank you’s from the bottom of their heart. A lot of these guys, especially the Vietnam guys, have never been properly thanked for their service.”

The first Quilters in the Valley presentation was done August of 2018. Since, the group has made presentations in homes, churches, restaurants and the Veteran’s Association.

They caught up with 90-year-old veteran Don Hayley at a basketball game January of last year. They made a presentation to Bryan Elliott, who was recently deployed with troops headed to the Middle East.

“These quilts represent a piece of home and our respect for the people that fight for our freedom,” Cruse said.

In the end, it’s not about sewing at all. Quilters in the Valley is doing its part to recognize the efforts of the U.S. military forces and the men and women stationed around the globe. The organization is extending an invitation to anyone in the Kittitas Valley that wants to participate.

Quilters in the Valley

What: Quilters in the Valley 24-hour Sew Day