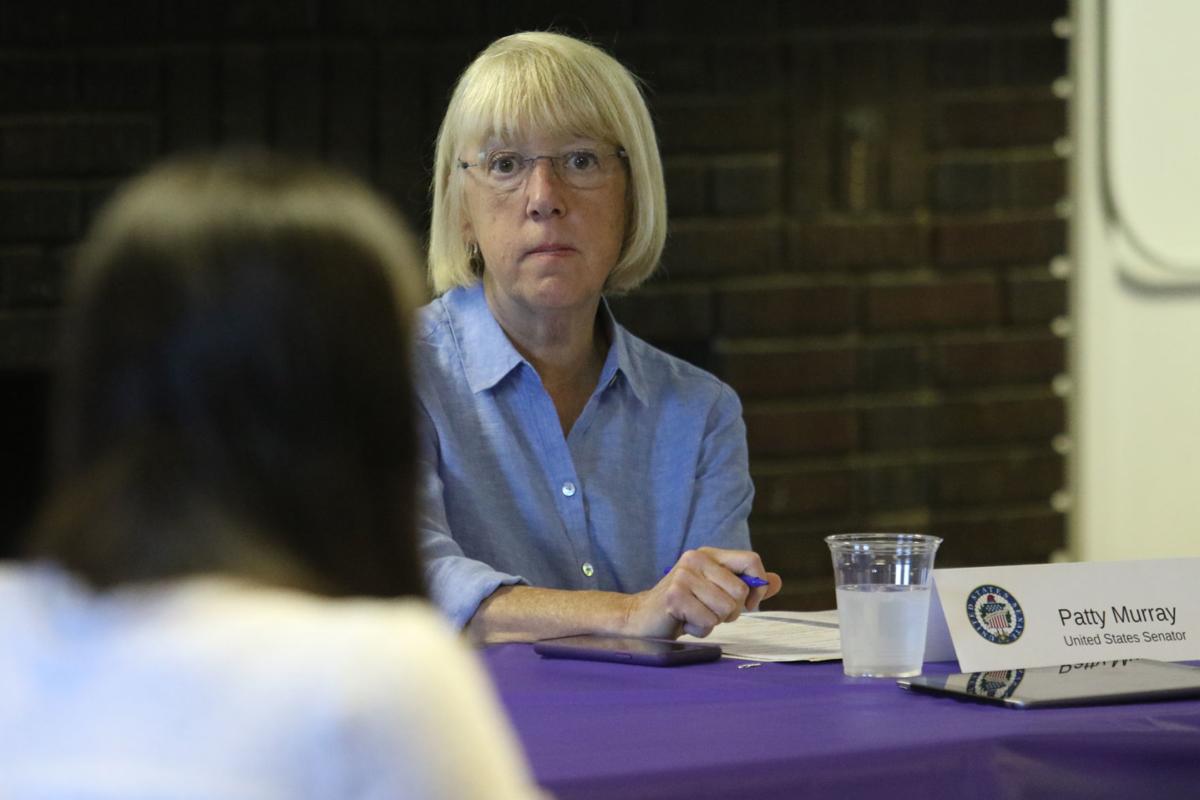 U.S. Sen. Patty Murray, D-Washington listens during a conference in August at Ellensburg American Legion Hall. Murray said Wednesday that increased access to testing and case tracking are crucial in the effort to reopen the state. 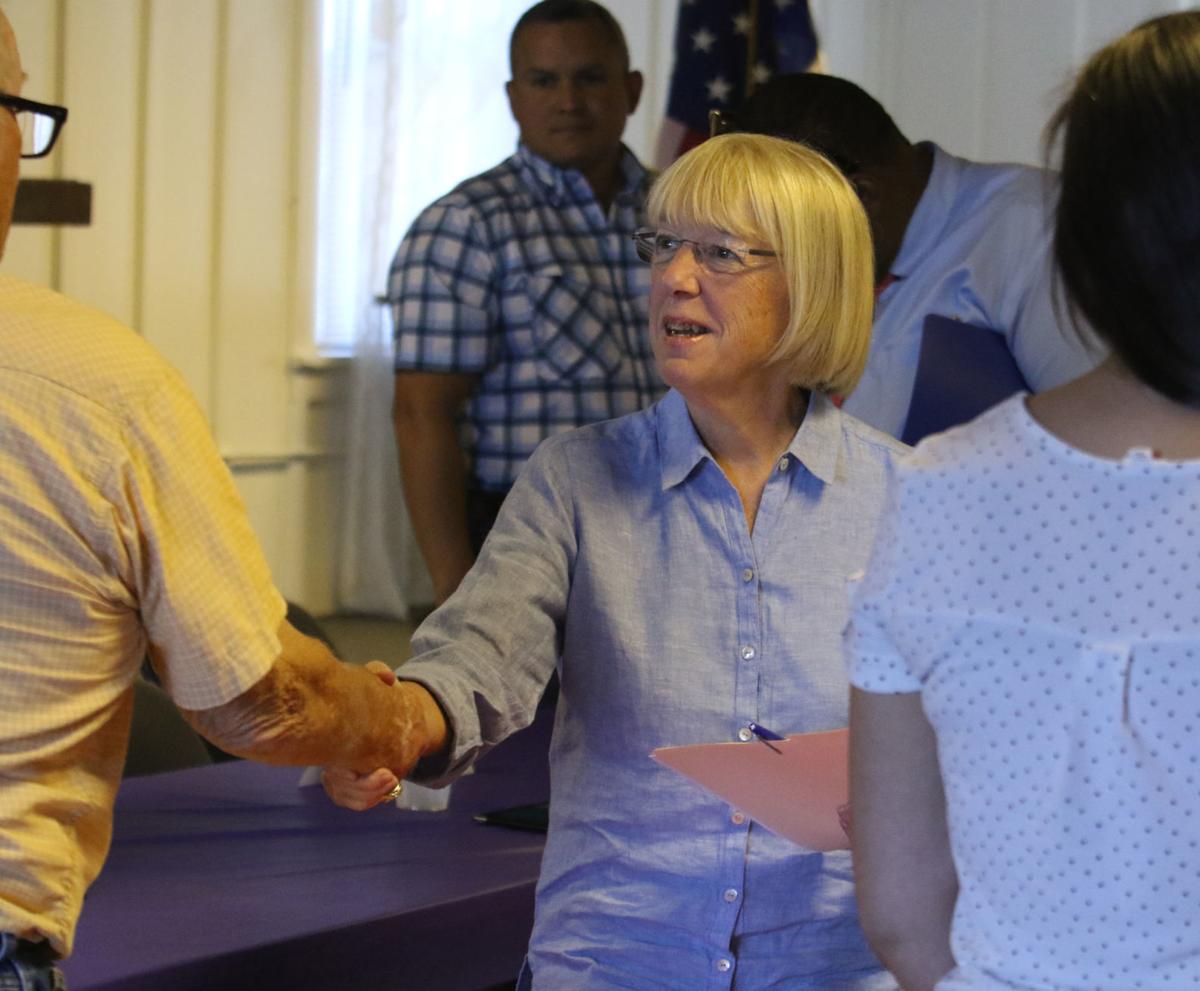 U.S. Sen. Patty Murray, D-Washington, center, shakes hands at the beginning of a conference in August at Ellensburg American Legion Hall. Murray said Wednesday that increased access to testing and case tracking are crucial in the effort to reopen the state.

U.S. Sen. Patty Murray, D-Washington listens during a conference in August at Ellensburg American Legion Hall. Murray said Wednesday that increased access to testing and case tracking are crucial in the effort to reopen the state.

U.S. Sen. Patty Murray, D-Washington, center, shakes hands at the beginning of a conference in August at Ellensburg American Legion Hall. Murray said Wednesday that increased access to testing and case tracking are crucial in the effort to reopen the state.

Although she feels like social distancing requirements are helping stem the tide of the coronavirus outbreak in Washington State, Senator Patty Murray wants her constituents to know that we’re not out of the woods yet, especially when it comes to the impact of the virus within rural communities and vulnerable populations.

“It’s just going to continue to be really tough,” she said. “I am going to keep doing everything I can to make sure that this Washington gets what it needs from the other Washington to respond and recover from this crisis, including in Central Washington.

Senator Murray (D) hosted a virtual roundtable with journalists from Central Washington on Wednesday where she touched on subjects ranging from President Trump’s response to the pandemic to impacts on regional small businesses and workers.

Murray said she has been deeply frustrated by what she described as missteps and mixed messages from the Trump administration during the pandemic.

“Really their lack of urgency in response to this pandemic,” she said. “I’ve been doing everything I can on Capitol Hill to ring the alarm bells and get the federal government to really take this crisis seriously from the beginning.”

At top of Murray’s priority list is ensuring that frontline workers receive access to medical supplies and testing equipment, as well as support for small businesses and their workers.

“While it was not the bill I would have written on my own, I was very glad that Congress did pass the CARES Act that was signed into law last week,” she said. “It takes some really important steps to make sure that strong investments in workers, families, small businesses and our healthcare system are prioritized in this response effort.”

Murray pointed out that funding was included in the bill for hospital surge capacity, as well as childcare and continuing health care (CHC) services. Now that the act has been signed into law, Murray said the next steps are to ensure that Washington state receives the funds they are entitled to. One step towards that goal was the creation of a page on her government website that includes information about federal grant funding and loans, as well as other forms of assistance available to those in need.

Taking the financial magnitude of the CARES Act into account, Murray said President Trump has dropped the ball far too many times to be handed a bill of that size without what she described as rigorous oversight.

“Moving forward, we have to be ready to hold President Trump and his administration accountable for implementing this law that we passed,” she said. “They need to do it with urgency, with consistency and with equity.”

Beyond oversight, Murray said a thorough analysis of the government-level response to the pandemic is warranted to gain a better understanding of what went wrong.

“We need to understand what the early mistakes were in the testing,” she said. “Why it happened and what we need to do so it never happens again. I’ve already called for a 9/11-style commission so Congress can gain insight into where the federal government fell short in responding to this crisis because we’ve got to learn from the mistakes.”

Murray said she has also asked the independent watchdog at the Department of Health and Human Services to investigate any missteps in the field of virus testing, a request she said they have agreed to.

“They are working very hard on it right now,” she said. “Their answers are going to be very important. It’s not about pointing fingers. It’s about making sure we knew what went wrong so we implement policies and resources, so we are not faced with this in the future.”

PATH TO REOPENING THE STATE

Along with getting Washingtonians through the crisis, Murray said the next step is ensuring that the state has the tools it needs to resume societal activities, stressing that the decisions along that path need to be driven by both science and public health.

“Getting where we need to go on testing is critically important to that goal,” she said. “The Trump administration repeatedly failed to recognize the need for extensive testing to fight COVID-19 from day one, and we have very little information about who needs what or where the gaps are.”

Large-scale virus testing that is seen in a short turnaround time is an achievement Murray said is long past due. She said a plan has been introduced that will push the Trump administration to get on track with those goals.

“What my proposal will require is the administration to finally formulate a plan to dramatically ramp up rapid testing that’s easily available, including ensuring adequate testing in our under-resourced areas and underserved populations,” she said. “We are going to require money to be sent to states, healthcare facilities and labs, so we can aggressively ramp up testing and contact tracing for starters.”

Along with making progress on testing the population, Murray said the state needs to be prepared for the possibility of a second virus surge. If a second wave becomes a reality, she said health care facilities within the state and their frontline workers must have the equipment and supplies necessary to ensure they don’t start out behind the ball. She said rules also need to be in place for businesses to follow so they know how to open their doors again, ensuring people coming in or working there have the confidence to know that they won’t come in contact with the virus.

As the month continues, Murray said she will continue working on making progress from Washington state while Congress is in recess. In doing so, she said conversations will continue with various stakeholders and demographics within the state to ensure all are being heard.

“I know we’re not in session, but we have not stopped working 24/7,” she said. “I am working constantly to make sure as I work with other members of the senate and the house that we do the right thing to move forward, get ourselves out of this and be ready so this doesn’t happen again.”