A Johnny Cash ticket from 1984, the first year the Ellensburg Rodeo had country musicians perform. 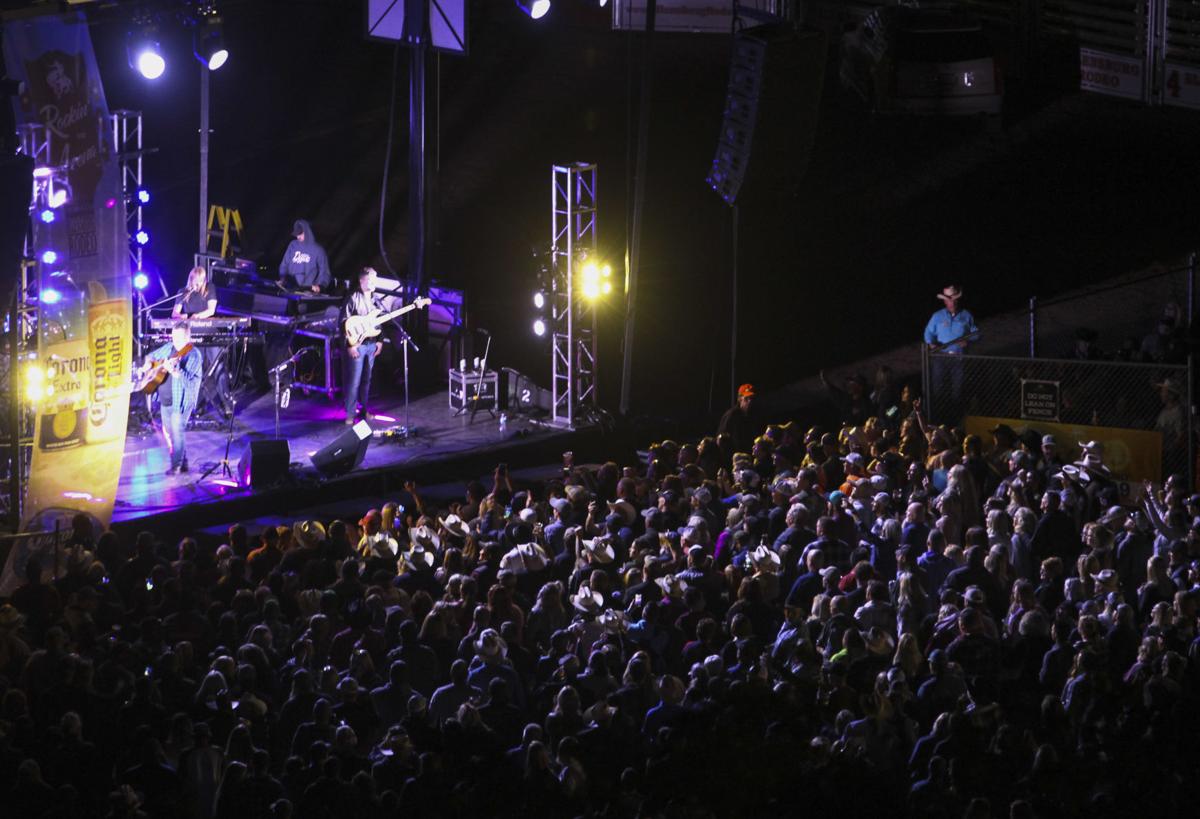 Joe Diffie plays for a large, energetic crowd during Rockin’ The Arena at the Ellensburg Rodeo Arena in Ellensburg on Thursday night in 2018. 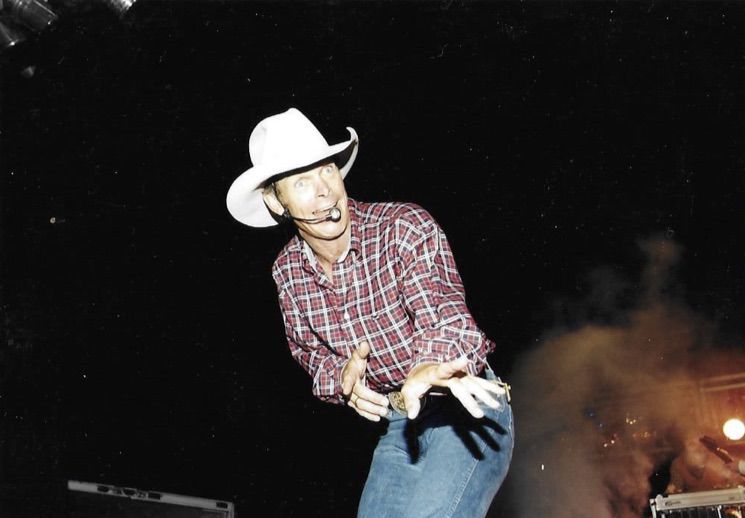 Chris LeDoux performs at the Ellensburg Rodeo in 1997. 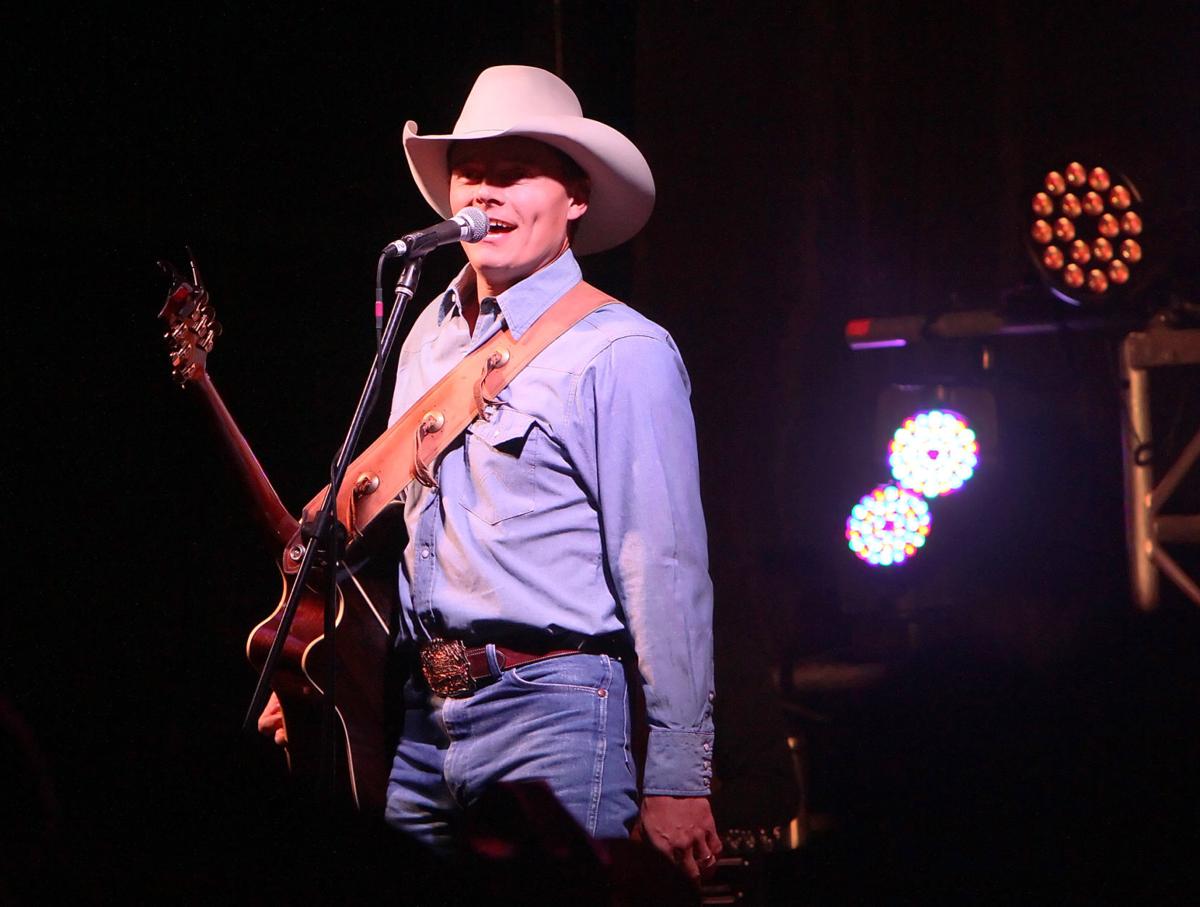 Ned Ledoux performs during the Rock the Rodeo concert at the Ellensburg Rodeo Arena, Thursday, Aug. 31, 2017. Ned last performed in Ellensburg 20 years ago as a drummer with his dad Chris.

A Johnny Cash ticket from 1984, the first year the Ellensburg Rodeo had country musicians perform.

Joe Diffie plays for a large, energetic crowd during Rockin’ The Arena at the Ellensburg Rodeo Arena in Ellensburg on Thursday night in 2018.

Chris LeDoux performs at the Ellensburg Rodeo in 1997.

Ned Ledoux performs during the Rock the Rodeo concert at the Ellensburg Rodeo Arena, Thursday, Aug. 31, 2017. Ned last performed in Ellensburg 20 years ago as a drummer with his dad Chris.

Just like Johnny Cash fell into the Ring of Fire, and went “down, down, down, and the flames went higher” — so did the tradition of musicians performing at the touted Ellensburg Rodeo.

“The Rodeo board decided we would try and see if there was an interest in concerts. And so the only night we could do it was Thursday night, and so we tried for a lot of years, 15 years at least I think, trying to have concerts. You know, they were decent attendance, but the community didn’t support it,” said arena director Rick Cole, who’s been on the board for 37 years.”

Ticket sales were all dependent on the Kittitas County residents. Most of these acts took place the day before the rodeo events commenced which was before the out-of-town visitors arrived.

According to Cole, the Ellensburg Rodeo was losing funds each year except in 1989 when Kay T. Oslin was in town at the same time she was No. 1 on the charts. Her song, “Hold Me,” was the Best Country Song in ’89. Also, Chris LeDoux who played here in 1997 and 1998.

“We had a lot of good entertainers here,” Cole said. “They would draw 2,000-2,500 people, so we would basically break even and lose money.

“… You can’t do things if the community won’t support it. We’re a private business, you have to have the income to support the expenses.”

And having a concert on the weekend isn’t a legitimate option either with the rodeo including the PRCA Xtreme Bulls Tour Finale at 8 p.m. Saturday that does extremely well in ticket sales.

So how did concerts at the Ellensburg Rodeo start up?

A private promoter named John Drinkwater, who worked at Central Washington University for 34 years and convened concerts at the university, decided at the time he wanted to get into the entertainment industry. He proposed the idea of renting the rodeo grounds for a concert to the Ellensburg Rodeo board, and both parties agreed for a Thursday night.

And working through an agent in San Francisco, Drinkwater was able to book Cash that very first year in 1984.

“Johnny Cash became available and I thought that made a lot of sense for Ellensburg,” he said.

The concert didn’t sell out, but it was still a success. But it didn’t do as well the following year when Drinkwater booked Greenwood for another Thursday night.

So, he got out of scheduling events at the Ellensburg Rodeo after those two short years.

“I was willing to try it on a Thursday night. I tried it for two years and realized it’s really tough to put a show on that particular night,” Drinkwater said, who later spent 23 years operating events at the Gorge Amphitheater. “Simply because your market isn’t there yet.”

Was he surprised that Cash didn’t sell more tickets? Yes, but he believes Cash wasn’t as big of an icon than as he is today.

“Johnny Cash is a legend and an icon in the country industry at this part of the history of country industry, but at that time, he was big, but he wasn’t huge,” Drinkwater said. “… I knew he was going to be a good act and the crowd would enjoy it. I thought we would sell some tickets. We were able to keep our head above water that kept me interested for the second year to try it again with Lee Greenwood.”

The Ellensburg Rodeo, though, kept it alive.

Joel Smith, who served on the Rodeo board for 26 years and is the founding member of the Ellensburg Rodeo Hall of Fame, was now in charge.

There was a one-year hiatus in 1986, but it was back and running in 1987 with artists John Schnieder and Tucker.

For the next four years, the concerts were slated for Saturdays. But not only was it arduous to have a concert on a day of the rodeo, setting up became a time element and was moved to Thursdays up until its demise in 1998.

According to Smith, the Ellensburg Rodeo was paying anywhere from $40,000 to $80,000 for production and artist contracts.

And he estimated that in those years the shows were strictly run by the Ellensburg Rodeo, they netted around $1,800 — total.

“It was scary,” Smith said. “To put out that kind of money and you just hope that people showed up.”

But it’s making a come back, thanks to Ellensburg Rodeo board member Kerry Clift, who’s in charge of the Gold Buckle Club and concerts. The club has an annual summer party each year, and Clift saw it needed an upgrade.

From seeing how the National Finals Rodeo (NFR) organizes its event in Las Vegas by bringing in multiple country artists before the rodeo, Clift wanted to do something alike for not only his club but for the community.

“Let’s do something similar to that, have a kick-off concert on Thursday night to kick off the weekend and then roll into the rodeo,” he said. “And also provide my Gold Buckle members their summer party in the sense.”

The Ellensburg Rodeo is now in its third year of it. In 2017, Clift was able to bring in Ned LeDoux, son of Chris LeDoux. And last year, Miller Campbell (Glenn Campbell’s cousin) and Joe Diffie.

This year’s “Rockin’ the Arena” on Aug. 29 will feature Whey Jennings (grandson of Waylon Jennings) and Russell Dickerson, an up and coming artist who’s had two singles (“Yours” and “Blue Tacoma”) reach No. 1 on the Country Airplay chart.

There are two different crowds in Kittitas County when it comes to their taste in country music, with fans of the old and the new. Clift felt that bringing in two artists with contrasting styles of country was the best approach.

It’s an approach Clift hopes to sustain. It was similar in 2018 with Miller Campbell and Diffie, except Diffie was the main act as old country. This year, its flipped with Whey Jennings opening up for the first 40 minutes, and Dickerson playing for the last hour and 45 minutes, more or less.

According to Cole, the Ellensburg Rodeo is on a year-to-year trial with the concerts and it’s been positive so far.

But if it can’t pay for itself, the board won’t allow it to jeopardize the finances in rodeo.

“Our primary duty is to put on the Ellensburg Rodeo and we can’t do anything that detracts from that,” he said.