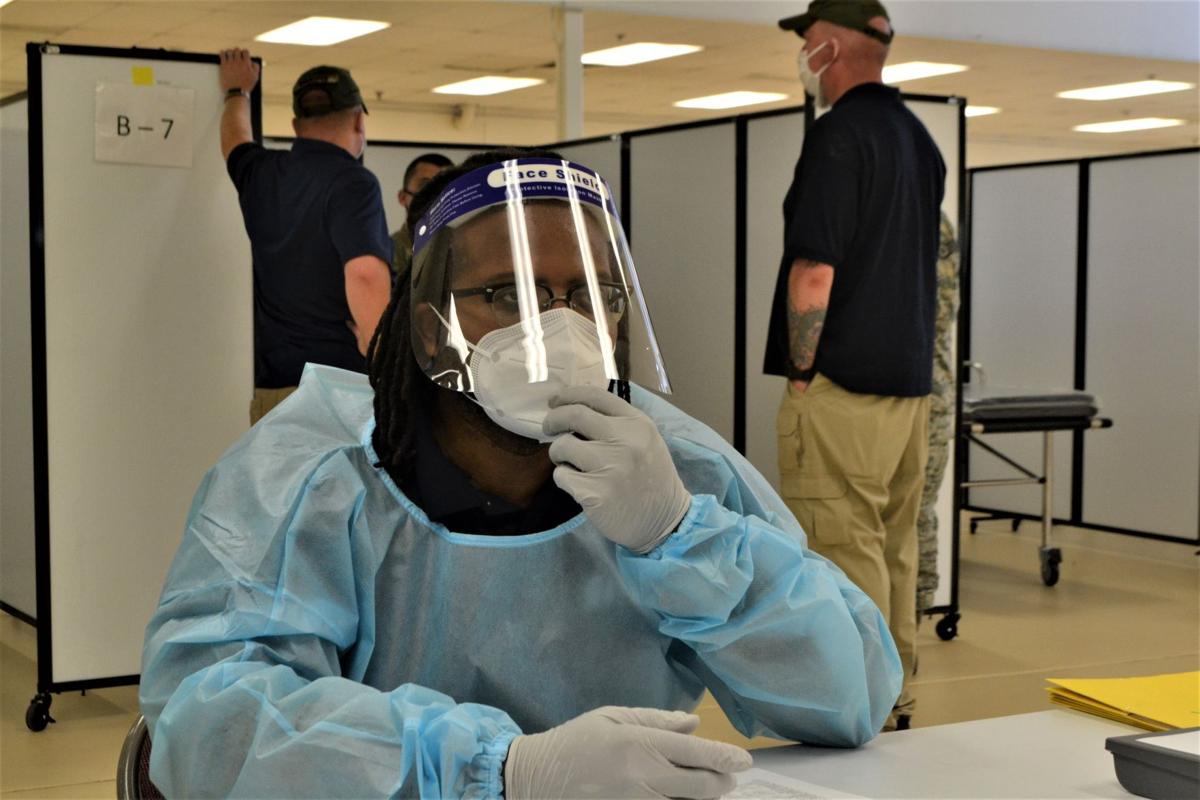 Registered nurse Issac Adams hands out registration at the front door of the Teanaway Room. 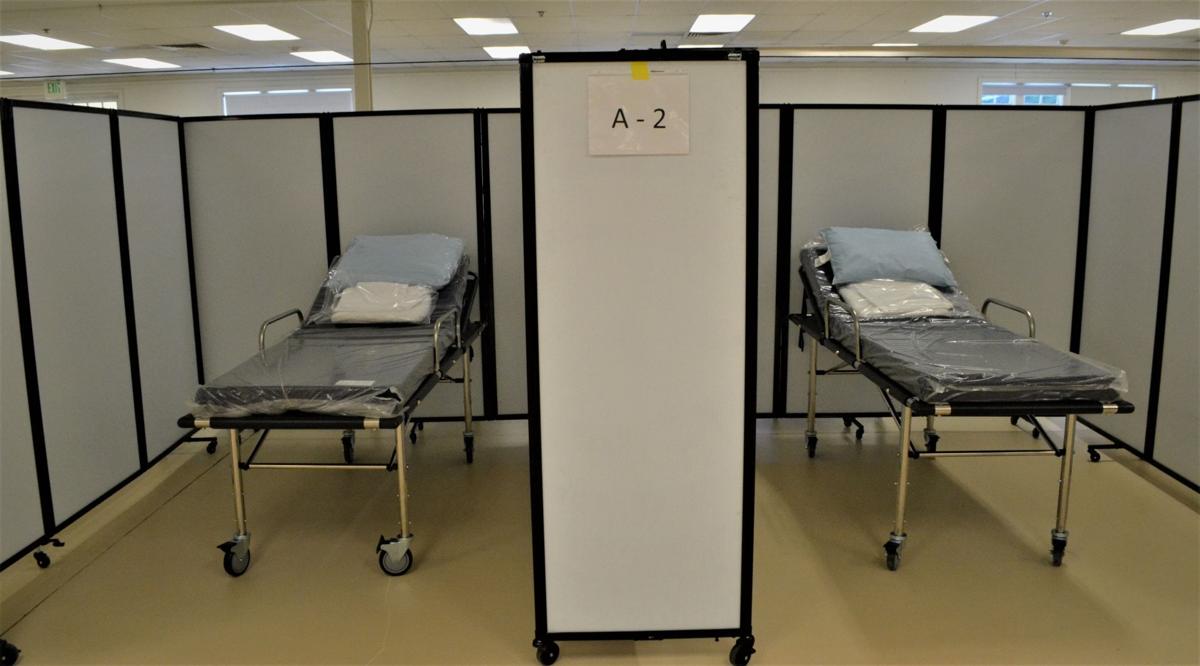 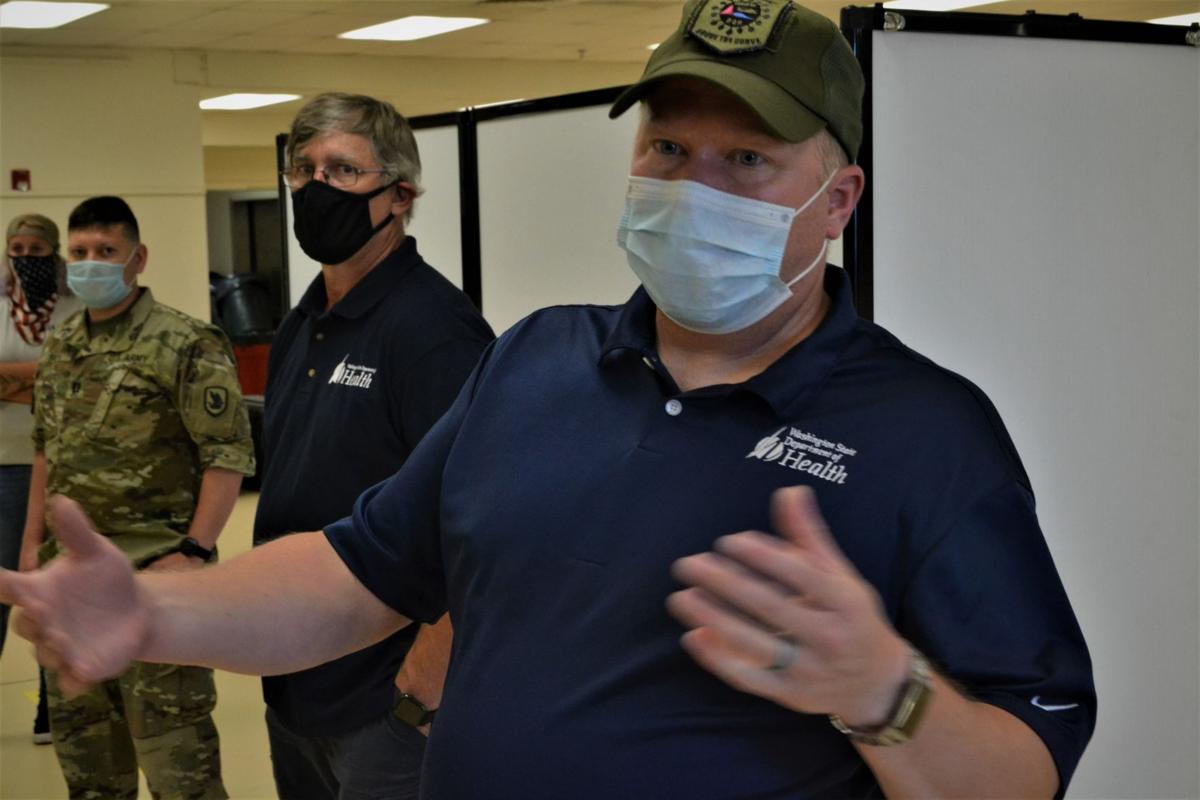 EID Training and Exercise Coordinator Matt Simons with the Office of Emergency Preparedness and Response talks with around 30 attendees at the Rapid Deployment Isolation Package drill Wednesday at the Kittitas Valley Event Center.

Registered nurse Issac Adams hands out registration at the front door of the Teanaway Room.

EID Training and Exercise Coordinator Matt Simons with the Office of Emergency Preparedness and Response talks with around 30 attendees at the Rapid Deployment Isolation Package drill Wednesday at the Kittitas Valley Event Center.

The Kittitas Valley Event Center grounds have looked a little like a ghost town, isolated and vacant, for the past several months.

The advanced team accessed a completely empty Teanaway Room on Tuesday. By Wednesday afternoon, members of the Department of Health moved in with 30 beds, mobile dividers, constructed two 8-by-8-foot plastic quarantine rooms, and a registration table along with medical work stations. They were done in less than an hour, establishing a complete mobile isolation station to support and monitor COVID-19 patients who have tested positive, but not yet in need of emergency services.

“I was very pleased with the way the exercise went today,” said Lt. Col. Bruce Simpson with the Air National Guard. “It’s the third and final exercise. Our previous two were on in Olympia and Saint Martin’s University in Lacey. The purpose is to create an isolation set up for people with mild symptoms to be monitored.”

EID Training and Exercise Coordinator Matt Simons with the Office of Emergency Preparedness and Response said the DOH has the ability to set up three such operations with a 48-hour period anywhere in the state, should counties be overrun with positive tests, he said.

“The purpose of this is to create a deployable, sustainable isolation center. If an area has a rapid increase in COVID-19 we can be ready, Simons said. “We’re seeing larger numbers in the younger demographic and we don’t have a place where we can shelter those mild cases.

“They’re living at home or living with their families, who have been compromised. This is set up to track the progress and make sure they are in an isolated environment and not spreading the disease.”

The exercise included members of both the Air and Army National Guards, along with the Washington State Department of Ecology, Department of Health, Kittitas Sheriff’s Department, Yakima County Emergency Management and the Yakama Nation.

Kittitas Valley Healthcare Chief Medical Officer Dr. Kevin Martin said rural areas like Ellensburg are more in need of isolation facilities such as the mobile unit they set up on Wednesday.

“The positive cases we’re seeing right now is 20-to-25-year-olds and those over 70. What we know is over time, we’ll fill in the gaps in between them. It’s the 30, 40 and 50-year-olds that are going to end up in the hospital for two and three weeks at a time. So, having a monitoring facility like this where we can keep an eye on them until they need hospitalization protects the ability of the hospital to care for so many.”

Kittitas County is currently in Phase 3 of the Gov. Jay Inslee’s reopening plan. According to the Kittitas County Public Health Department, there are 98 confirmed cases, 66 pending cases, 2,008 have tested negative and 92 have recovered.

“The thing is, we don’t pick and chose who’s going to get infected,” Martin said. “It will sweep across every demographic. Since we first started planning for this in early March, it was always a question of when, not if.

“One of the things I find most incredible is that we’ve known about this virus for six and a half months. We’ve learned the importance of basic hygiene. I would say behavior is probably the most important factor. We need social distance and other protocols. Human beings are social creatures, we crave that interaction, and that’s the biggest hardship of this whole pandemic. We need to stay apart and this pandemic forces us to do something that is very unnatural for us.”

Yakama Tribal citizen Theresa Wallahee joined the 30-some officers and government agencies with hopes of discovering something that might be helpful to the Yakama people.

“I hope to get a better understanding of things we can do. There has been high amount of people that have contracted the disease,” she said. “I hope to understand this process so we can set up our own isolation center so we can be more productive in our fight against this disease.”