Elk gather during feeding at L.T. Murray Wildlife Area off Watt Canyon road northwest of Ellensburg on Thursday. {span}The Washington Department of Fish and Wildlife is seeking $26 million in funding for 2020.

A bull elk munches on hay during feeding at L.T. Murray Wildlife Area off Watt Canyon road northwest of Ellensburg in January 2017. The Washington Department of Fish and Wildlife is seeking $26 million in funding for 2020.

Hundreds of Rocky Mountain elk gather in the L.T. Murray Wildlife Area west of Ellensburg to be fed hay in 2014. 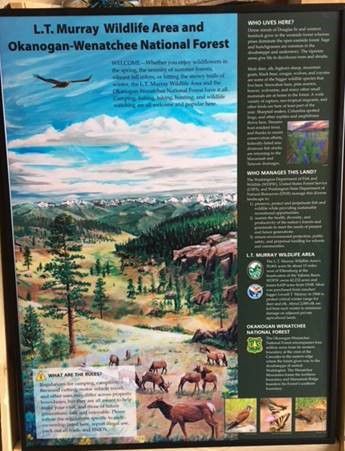 An interpretive kiosk in Robinson Canyon provides information about wildlife in the L.T. Murray Wildlife Area and Okanogan-Weantchee National Forest. The Washington Department of Fish and Wildlife is seeking $26 million in funding for 2020.

Elk gather during feeding at L.T. Murray Wildlife Area off Watt Canyon road northwest of Ellensburg on Thursday. {span}The Washington Department of Fish and Wildlife is seeking $26 million in funding for 2020.

A bull elk munches on hay during feeding at L.T. Murray Wildlife Area off Watt Canyon road northwest of Ellensburg in January 2017. The Washington Department of Fish and Wildlife is seeking $26 million in funding for 2020.

Hundreds of Rocky Mountain elk gather in the L.T. Murray Wildlife Area west of Ellensburg to be fed hay in 2014.

An interpretive kiosk in Robinson Canyon provides information about wildlife in the L.T. Murray Wildlife Area and Okanogan-Weantchee National Forest. The Washington Department of Fish and Wildlife is seeking $26 million in funding for 2020.

The Washington Department of Fish and Wildlife is starting the new year looking at ways to make the department sustainable and continuing to provide the services that recreators throughout the state have grown to expect and count on.

In the current legislative session starting Monday, WDFW will be asking for $26 million in supplemental and ongoing operations funding, having submitted the request to Gov. Jay Inslee in September. According to a press release from the department, the balance of the state wildlife account that the department depends upon has shrunk steadily over the last three years, while revenue has remained flat and basic costs have continued to rise.

The influence of the department within Kittitas County is immense. The department manages the 115,000-acre L.T. Murray Wildlife Area and identifies it as a high-priority treatment area in Washington’s 20-year forest health plan. According to a press release, 138 active Master Hunters reside within the county, comprising 9 percent of the department’s program. The hunters work on projects including habitat restoration and minimizing conflict between agricultural interests and the Yakima and Colockum elk herds, putting in 13,000 hours of annual work. WDFW enforcement officers responded to 49 public safety wildlife incidents in 2018, providing technical assistance tools to reduce negative human-wildlife interactions and promote non-lethal options.

WDFW Director of Budget and Government Affairs Nate Pamplin said the agency experienced significant reductions in the state general fund appropriations while the state was balancing its budget during the Great Recession.

“Quite frankly, we’ve never been fully restored from those reductions,” he said.

When central service costs or employee salaries go up, Pamplin said the state Legislature will approve the new costs, but out of every hypothetical $100 that is approved from the state general fund, only $25 is backed by actual revenue.

“They give us the permission to spend the money without the actual revenue behind it,” he said. “That’s what creates what we call the structural deficit.”

During the last legislative session, Pamplin said the department proposed to fill the shortfall with a combination of state general funds and a 15 percent fee increase for recreational hunters and fishers. The fee bill did not pass, and the Legislature provided the department with a one-time injection of funds that got the department through the current fiscal year.

Pamplin said another complication was added to the situation during the 2019 legislative session, when the Legislature approved several global cost increases.

“We’ve filled part of the hole on a one-time basis, but then a new gap was created where we were provided expenditure authority for accounts where we don’t have the ability to adjust and generate the revenue,” he said. “The Legislature is the entity that has the ability to adjust hunting and fishing license fees, for some of our contracts whether it’s federal government or other entities. We can go back and ask those individuals or show them that our new cost has gone up and so as we renew that contract, here’s the new rate, so we’re able to recover some funding in that way and close up that gap.”

During the 2017 legislative session, Pamplin said the Legislature provided one-time funding to the department which included a proviso that required the department to conduct a zero-based budget analysis, as well as working with an independent performance contractor on a performance audit for the department.

“We had to write a long-term funding plan to figure out and demonstrate to the Legislature a path forward on how to stabilize the agencies budget,” he said. “Those were very healthy exercises for us to go through. It was nice to have the performance audit document that this structural deficit is not the result of the department not being responsible with its funds. This is a result of the legislature approving cost increases and the department doesn’t have the mechanism to have the revenue to meet those obligations.”

As the department wrote their long-term funding program, Pamplin said they assembled a group of stakeholders from many sectors, including recreational and commercial fisherman, hunters, hikers, the business community, counties, forestry and agriculture. He said the stakeholders were brought in to examine the details and complexity of the departments budget.

“Let’s do some myth busting together, lets crawl through the numbers and help us identify how we would proceed,” he said. “There was quite a coalition that emerged out of that. There was fairly broad support for us to pursue that modest fee bill for the 2019 session.”

During legislative hearings in 2019, Pamplin said people from the coalition testified with their support for the departments plan, but there were also groups that raised concerns about the plan.

“Some groups had come in and agreed with the concept that the department should be fully funded and supports our services,” he said. “But they disagreed with the fees being the path forward. There were some policy debates about salmon allocation in the Columbia River that I think also entered into the debate about our budget, and that had consequences with our fee bill.”

“There’s a greater awareness and greater support overall for the agency’s funding,” he said.

When the department submitted its request to the governor last September, Pamplin said they submitted it as 100 percent being from state general fund. When the governor’s budget came out in mid-December, Pamplin said it balanced the budget assuming revenue from a version of the recreational license fee bill that’s very similar to version that the department requested in 2019.

“What I’m seeing our stakeholders mobilize on now is wanting to support the department’s full funding and figuring out how to stabilize the department’s budget so that we’re not in this perennial cycle of always going back and asking for just the base level of services,” he said.

Out of the $26 million the department is seeking for 2020, $3 million is slated for maintenance, $9.5 million for new legislative cost increases that Pamplin said are not backed by revenue, $6.7 in active services which he said is essentially the hangover from the previous biennia structural deficit and approximately $6.5 million for new work.

“The vast majority of it is still this ongoing structural deficit or ongoing cost increases that we’re just trying to figure out how to stabilize,” he said. “I think we’ve done a good job of getting the word out about what’s in those packages. I think there’s a desire for folks to figure out how to get the department funded for this biennium, but also how to book that funding so we’re not having to come back and ask for it in the future.”

Pamplin said the department regularly receives requests from stakeholders for new work and services and he said they want to be part of those conversations going into the future.

“There’s a lot of interest for us to do more,” he said. “It is really hard for us to be able to spend that time on some of those new initiatives when we’re struggling to keep ourselves stable at our current service delivery. It would be really nice for us to get that locked in, where we can spend more time on more work that people would like to see from the department.”