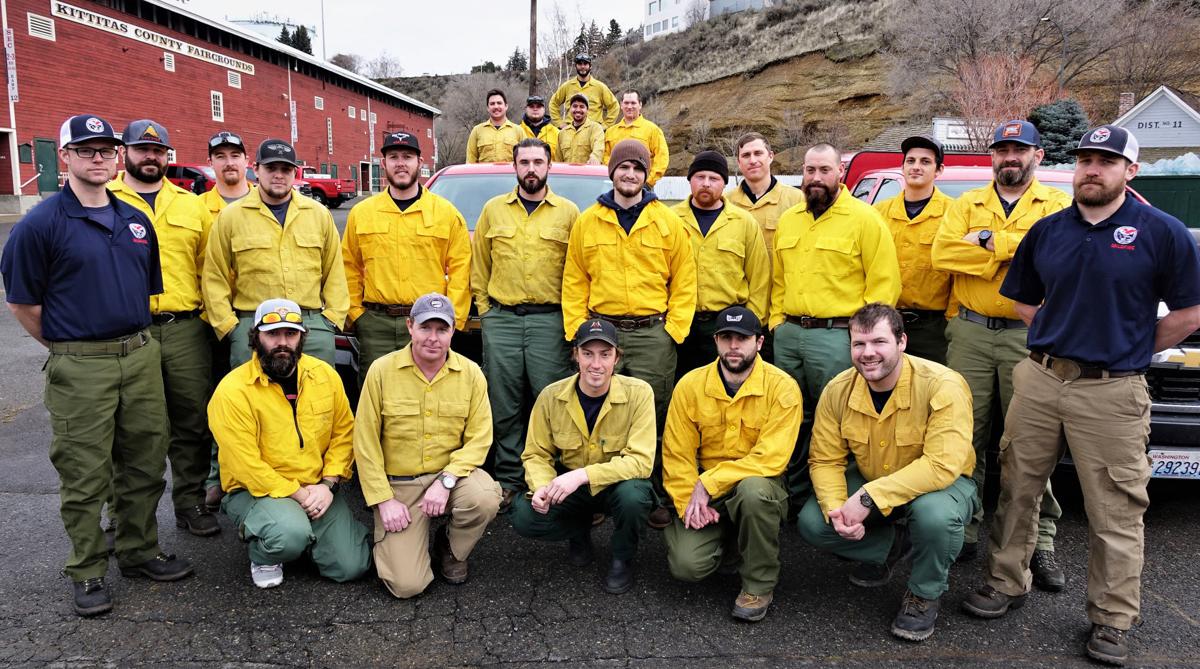 New recruits for the Washington State Department of Natural Resources pose during a two-day orientation at the fairgrounds in early February. 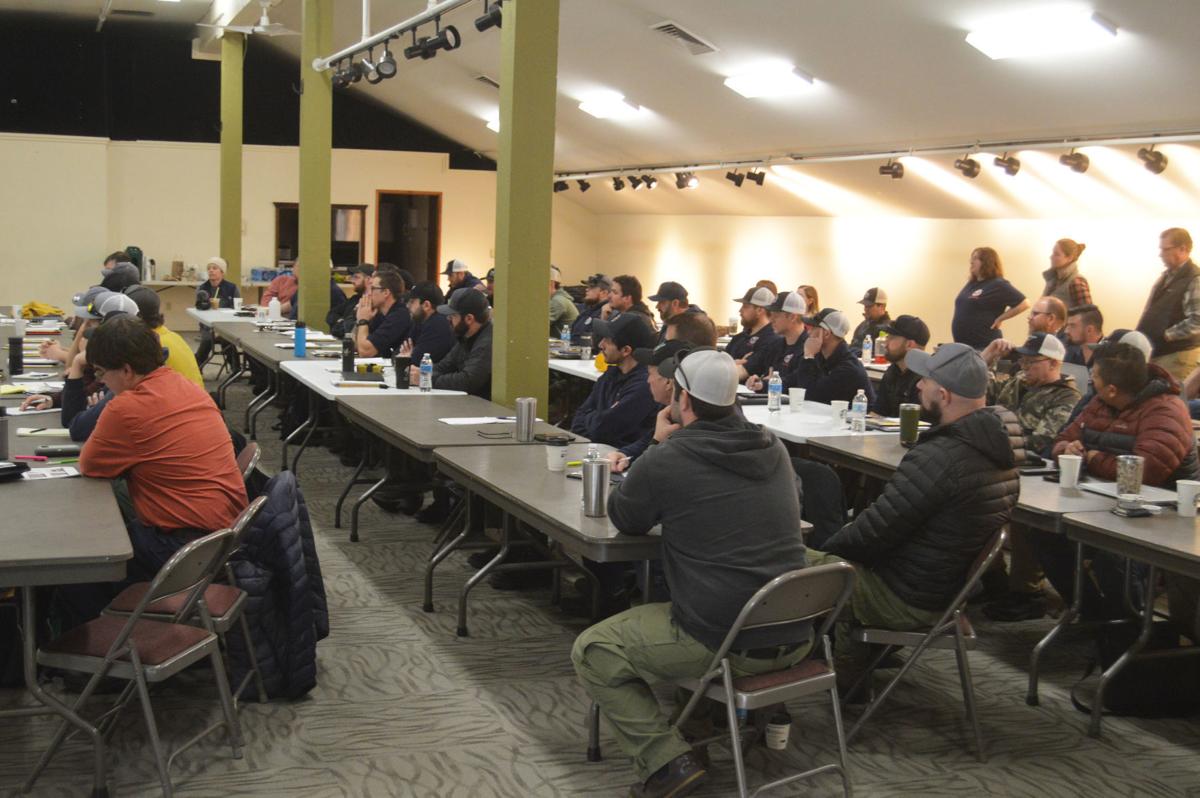 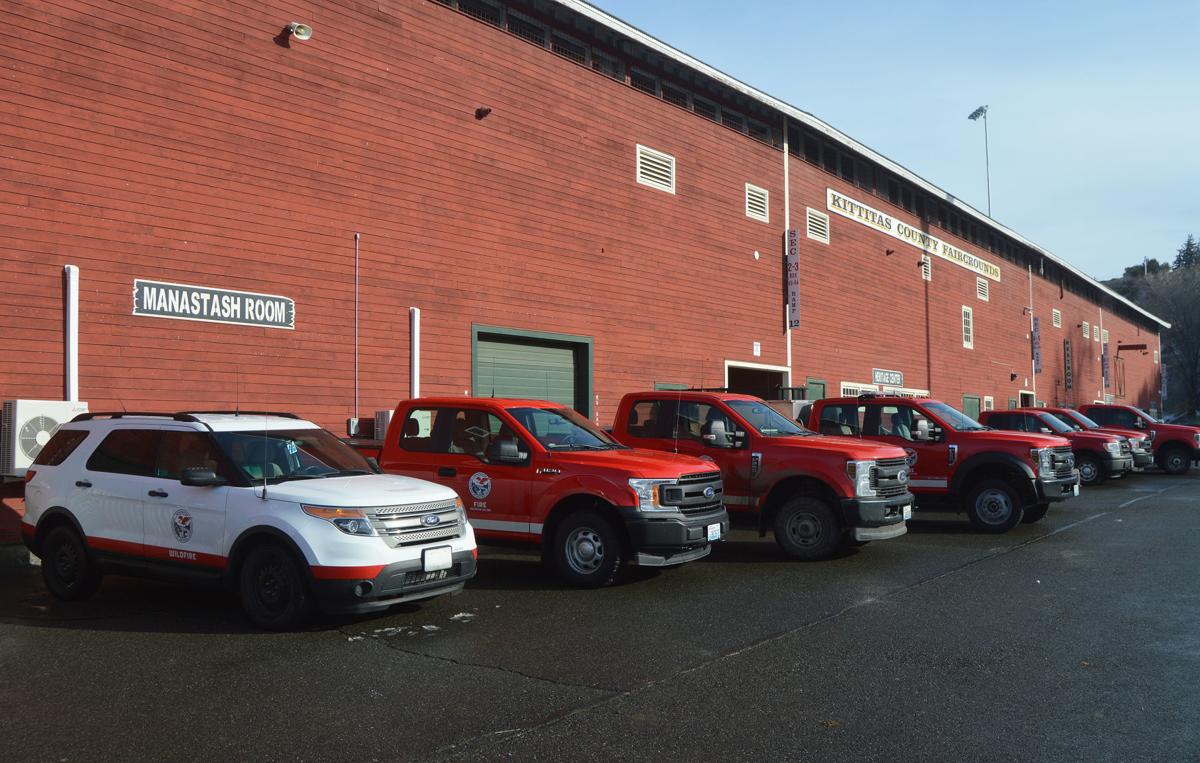 Washington State Department of Natural Resources vehicles line the parking area outside the rodeo arena at the fairgrounds during a new hire orientation on Feb. 5 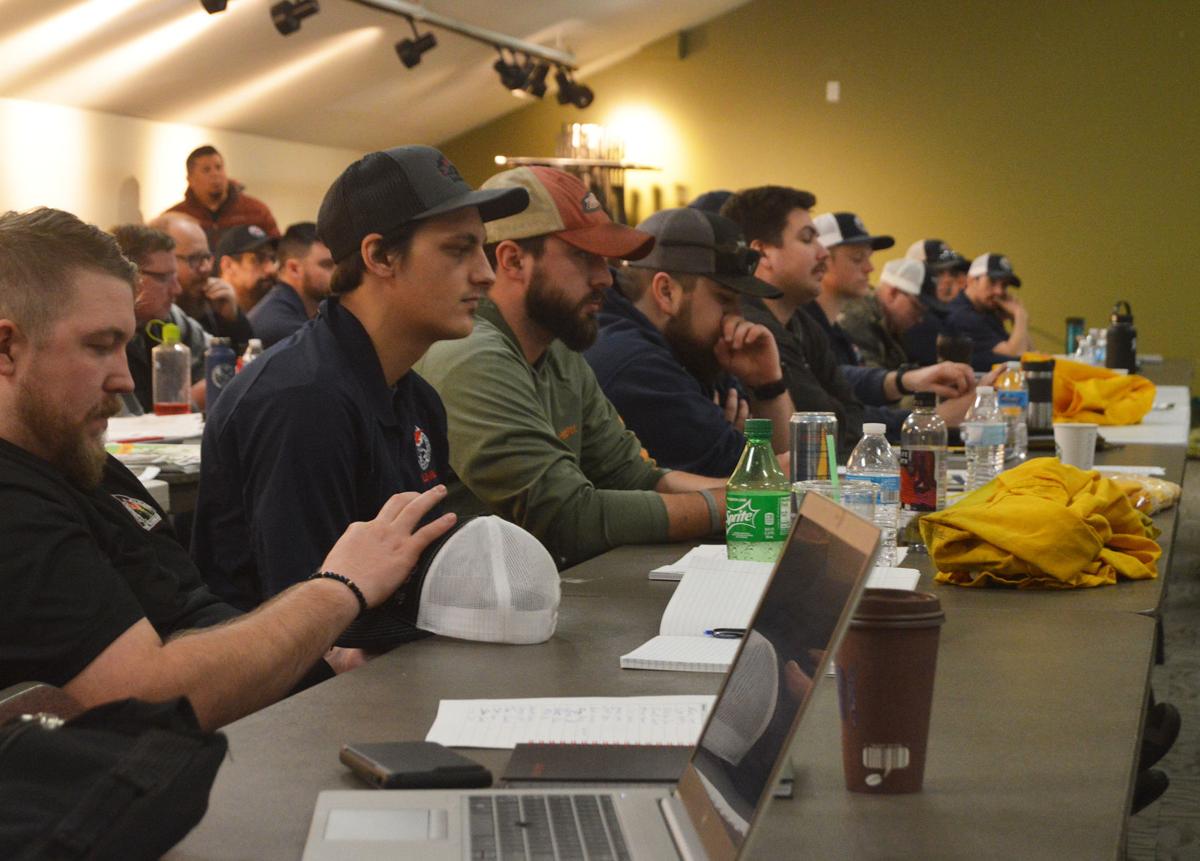 New recruits for the Washington State Department of Natural Resources pose during a two-day orientation at the fairgrounds in early February.

Washington State Department of Natural Resources vehicles line the parking area outside the rodeo arena at the fairgrounds during a new hire orientation on Feb. 5

As catastrophic wildfires throughout Washington State become a yearly reality, the Washington state Department of Natural Resources is stepping up to increase its numbers on the front line.

The agency held a two-day orientation at the Kittitas Valley Event Center in early February, where 30 new wildland firefighters and forest health specialists began their training. Approximately 20 department managers and subject matter experts from the agency also attended the orientation, which covered topics including forest health, wildfires, and how the two can work hand in hand to accomplish the state’s 20-year forest health plan.

Washington State Commissioner of Public Lands Hillary Franz originally planned to attend the orientation but had to cancel her trip due to inclement weather. She addressed the group through a live video chat where she underscored the importance of the department’s mission.

“We are making it a top priority for this state to address our catastrophic wildfires,” Franz said. “Year after year, we continue to see rapid growth, with (2018) having the most wildfires in Washington State’s history — 1,850 wildfires.”

With 40% of those fires occurring west of the Cascade Range, Franz said the wildfire epidemic is no longer contained largely to lands in the eastern portion of the state.

“This is an entire Washington state issue,” she said. “We are finding ourselves fighting those fires from as early as March to well into November.”

Franz said her belief is that the only way the state will get on top of the battle is to build a team that has the capacity to employ skills and equipment on the ground to respond to fires as expeditiously as possible while protecting at-risk communities and the safety of firefighters during wildfire events.

“Unfortunately, we for too long in Washington State have underinvested in wildfire protection,” she said. “We find ourselves in a position where 50 years in the making we now have significant catastrophic fires.”

Franz told the group that the agency is not taking the issue lightly and is currently taking action to inform the state’s residents, Legislature and Gov. Inslee that the state must be investing in wildfire and forest health resources.

“You guys are the first direction in that step of being proactive, getting on the ground and reducing the catastrophic fires and reducing the fuel load feeding those catastrophic fires,” she said to the new recruits. “It is my job to ensure you have the resources, training, critical equipment and air assets to keep you guys safe and I will be fighting for that every single day.”

Franz said a major step in that fight is the work being done during the current legislative session to create a dedicated revenue stream for wildfire and forest health efforts, the first of its kind in the state. If passed, House Bill 2413 would generate $63 million each year for those efforts according to a press release from the agency.

“It will ensure that going forward, we’ve got the money, we’ve got the equipment, we’ve got the manpower and we’ve got the air assets,” she said. “We’ve got communities taking charge of making themselves more resilient and reducing these catastrophic fires by getting on the ground and treating 1.25 million acres of forest over the next 20 years.”

DNR Communications and Outreach Specialist Ryan Rodruck said Ellensburg was chosen due to its central location within the state.

“You have positions that are being filled throughout the state,” he said. “It made geographic and organizational sense to have that meeting in Ellensburg.”

Rodruck said the orientation was unique among others the department holds because the employees being hired are full-time.

“Typically for wildfire positions, we will hire seasonally and fill those positions during wildfire season,” he said. “These positions are new in that they are full-time positions. When we’re out of that wildfire season, those crews can be out doing forest health treatments in a preventative capacity in order to help prevent wildfire in the future.”

Rodruck said the ability for the new recruits to employ the preventative measures outside of wildfire season is crucial to the mission of the agency.

“In order to accomplish both the forest health and wildfire long-term plans, there’s that acknowledgment that the health of the forest and the wildfire danger go hand in hand,” he said. “The healthier your forest is, the more you can mitigate the potential for these megafires. While these folks are not in active fire mode, they can be out doing these forest health treatments, ensuring that we have healthy forests and ensuring that we are working with landowners to make sure that their homes are safe.”

As wildfire seasons progress into the future, Rodruck said the agency will persist in their efforts to create healthy forests and protect residents who are at risk.

“Commissioner Franz will continue to advocate for a permanent source of funding for both forest health and wildfire now and into the future,” he said.