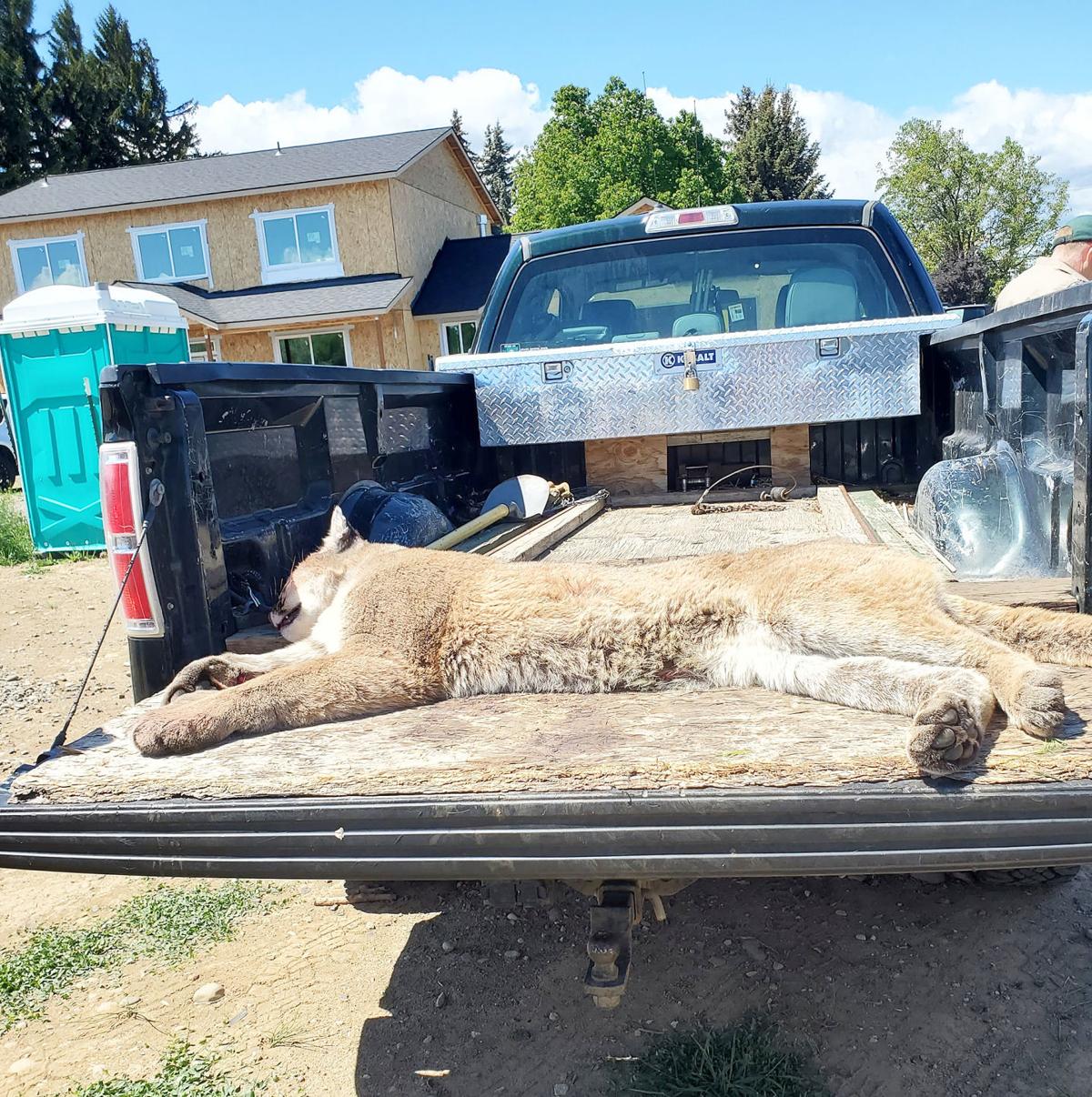 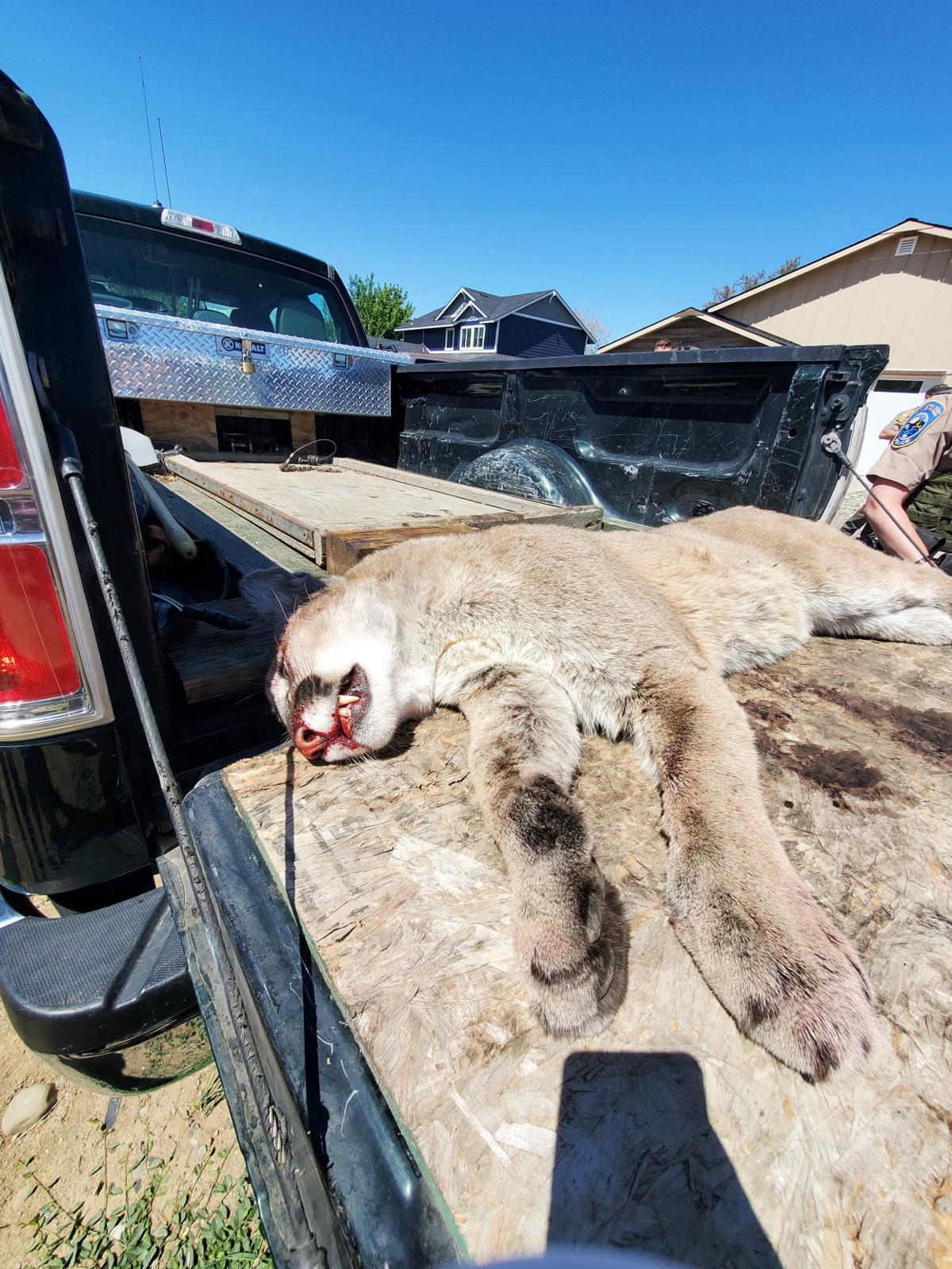 Some Ellensburg residents had a rather unsettling neighbor make a rare appearance last Friday.

Washington Department of Fish and Wildlife agents made the difficult decision to dispatch a 110-pound male cougar that was found in the backyard of a home near Mountain View Park last Friday. WDFW Sargent Carlo Pace said a necropsy showed the cougar to be approximately 2 years old and in good health, although somewhat obese for its age.

Pace said the decision to use lethal force was made after verifying the animal was in fact a cougar and factors such as the residential setting and proximity to schools and people left few alternatives.

“Given the location of where it was and the potential safety concerns for the animal being there, we had decided that drugs or relocation of this animal was not an option,” he said. “There were just too many things that could go wrong and it was not a controlled environment. We weren’t willing to take any chances in risking public safety.”

Once officers arrived on the scene, Pace said a perimeter was set up with roads being blocked off and neighbors asked to stay in their homes. Along with WDFW agents, Ellensburg Police officers helped get the word out and secure the area. Pace said it was quite odd to find a cougar in such a residential setting, and it took approximately 30 minutes to track it down as dogs were not available to help track the animal.

“We were going by sight,” he said. “I happened to throw a piece of rebar behind a shed as I walked up to where the cat was last seen, and I found it crouched down looking towards the home.”

Pace said the cat was lethally removed without any issues. He believes the cat was recently displaced by its mother and was trying to find his way back into the wilderness.

“Unfortunately, these are the animals we have the most issues with,” he said. “They are young and inexperienced. They can hunt, but they don’t necessarily always know what’s best for them and what they should go after.”

Prior to Friday’s sighting, Pace said he had received reports from homeowners in the Wilson Creek area that they had spotted a cougar moving on their wildlife cameras.

“I believe this was the same cat that worked its way down towards Ellensburg,” he said. “It might have come from the Naneum and ended up in town trying to find its way someplace.”

As the cougar had an empty stomach when it was killed, Pace said he believes the cat had been following another animal to its final location.

“He probably saw an opportunity for something where the house was,” he said. “He wouldn’t have been there in the middle of the day unless he was waiting for something to come out. They are opportunistic animals, and when they’re hungry they will try to get their paws on something that they can easily consume at that age without too much struggle.”

Although cougar encounters aren’t particularly common in suburban areas, Pace said the frequency is more common in the rural areas outside town. His advice for homeowners in rural areas is to be careful of letting pets outside during dawn, dusk, and late evening as that’s when the cats are most active. He also suggested taking precautions for livestock, as they are most likely to be predated upon by cougars.

Although Pace said cougars are most likely to flee and hide if they have a way out, he also explained that it is legal for a homeowner to use lethal force on a cougar if they can demonstrate that they felt like their personal safety was at risk or if the animal was attacking their pets or livestock. If possible, he suggested making a racket to scare the animal off prior to taking lethal action if the setting warrants such possibilities.

Pace said the situation is difficult for officers whenever they have to make the decision to use lethal force, and that Friday’s incident underscored the priority being placed on public safety.

“It’s very unfortunate to have to remove them,” he said. “It doesn’t matter what’s wrong with them. The decision we made was the only option for what we had available.”