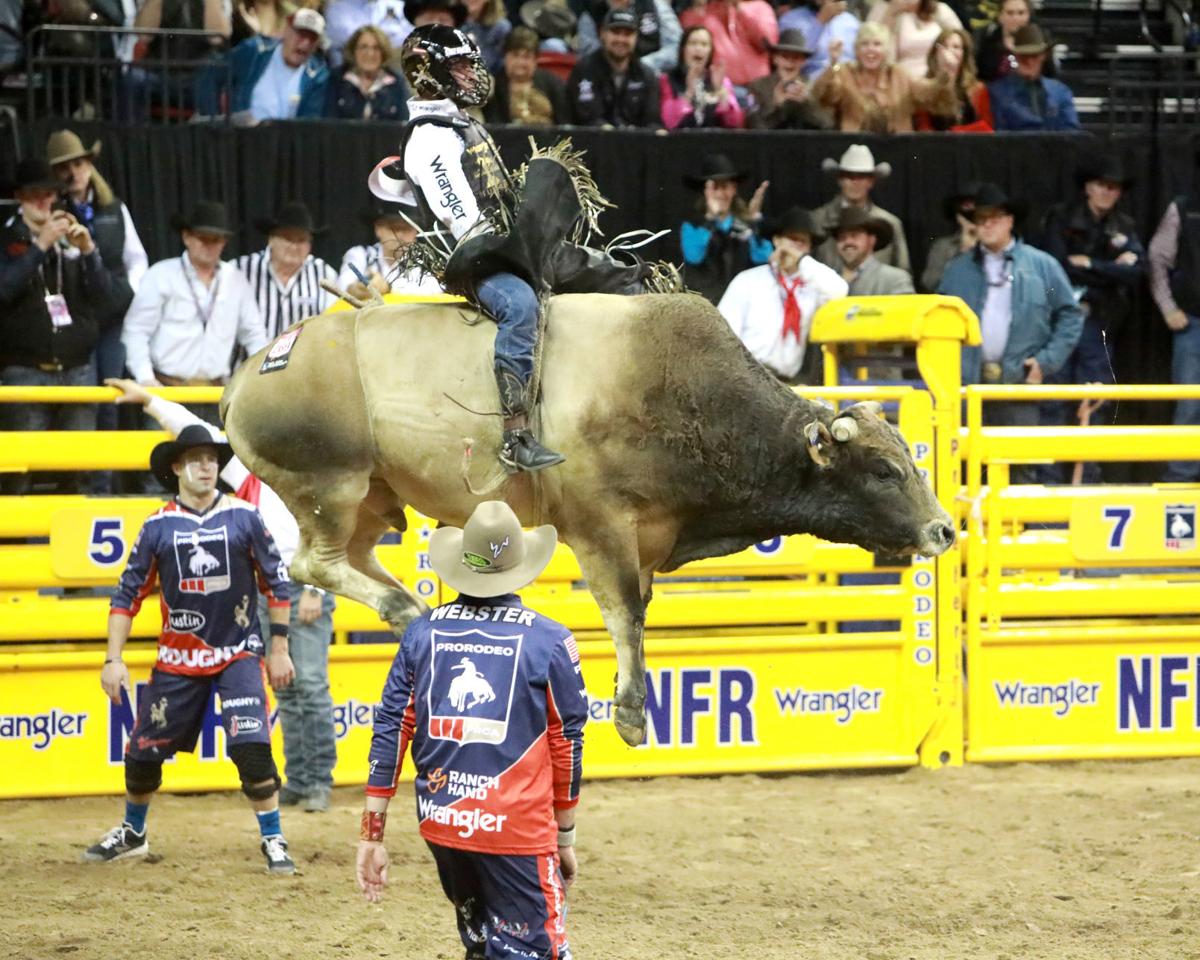 Sage Kimzey holds on for a 94-point ride at the National Finals Rodeo in Las Vegas Thursday night. 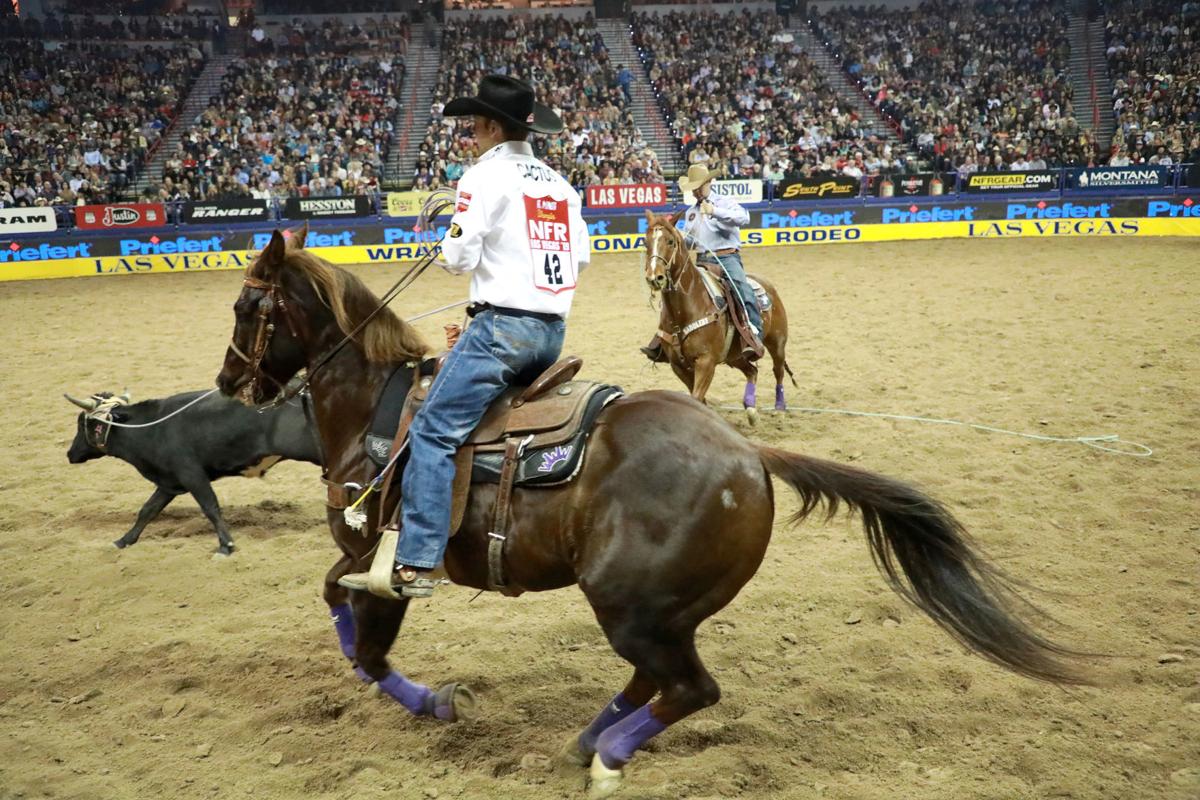 llensburg’s Minor brothers (Riley, in white) and Brady (in light blue) ride out of the arena after their run that finished in a tie for third on Thursday. 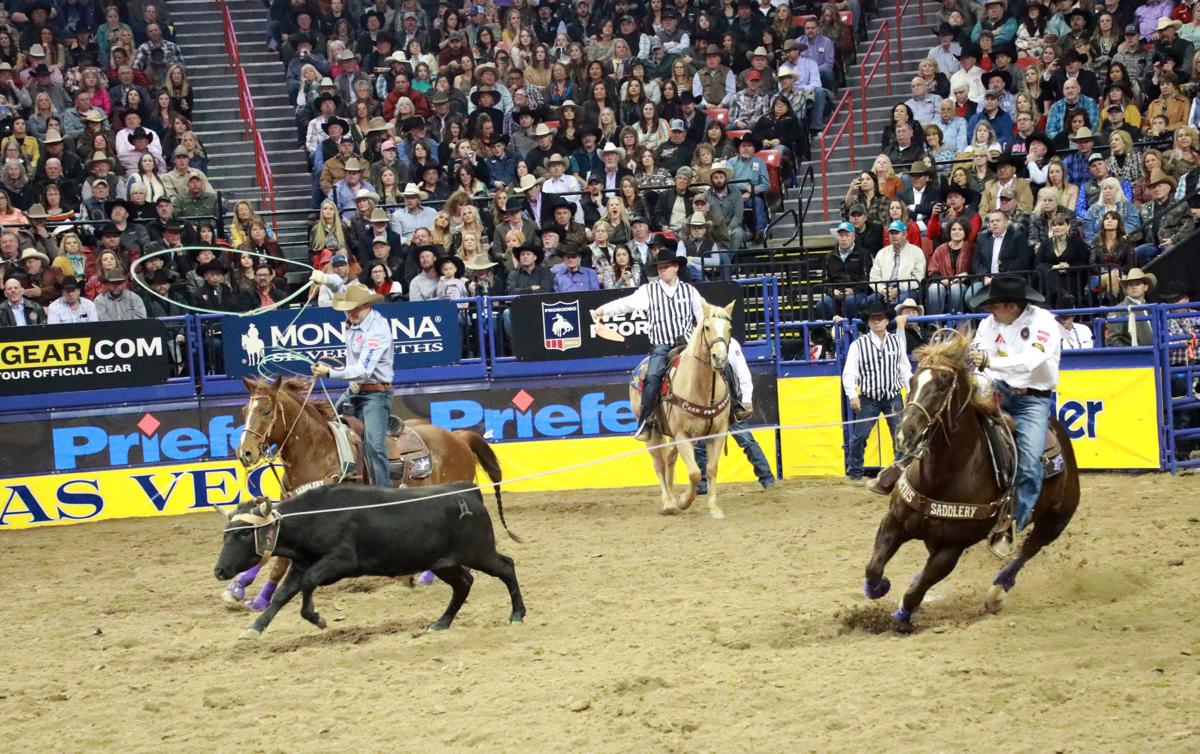 Ellensburg’s Riley Minor (not pictured)catches his steer during Thursday’s eighth round, while Brady Minor readies his heel loop. The duo stopped the clock in 4.4 seconds to split third place and win more than $13,000.

Sage Kimzey holds on for a 94-point ride at the National Finals Rodeo in Las Vegas Thursday night.

llensburg’s Minor brothers (Riley, in white) and Brady (in light blue) ride out of the arena after their run that finished in a tie for third on Thursday.

Ellensburg’s Riley Minor (not pictured)catches his steer during Thursday’s eighth round, while Brady Minor readies his heel loop. The duo stopped the clock in 4.4 seconds to split third place and win more than $13,000.

No one can expect good luck through all 10 days of the National Finals Rodeo and it certainly has stalled a couple of times for Ellensburg’s Minor brothers, yet Thursday night’s luck shone on the team ropers in the form of a 4.4-second time to split third place with Jake Cooper and Caleb Anderson.

The round paid Riley and Brady Minor $13,327 apiece and while it didn’t do much in terms of the average standings — the duo is still eighth — it did move their season earnings to $173,860, which is third in the world, less than a sixth-place NFR check away from second.

“You know obviously last night was a bummer,” Brady said of Wednesday’s no-time, “but luckily the go-round wasn’t overly tough tonight. I was nervous that a couple of guys would bump us after our run. It was alright though. We won a little over $13,000.

“We’ll take it and go on tomorrow.”

Thursday was that specific steer’s third run. Chad Masters broke the barrier on the steer in round two, while Coleman Proctor/Ryan Motes roped a 4.4-second time in the fifth round.

“I liked that steer,” Riley said. “I was a tick off the barrier. I was making sure he started. It felt good to come back after last night’s mess up.”

Brady, however, was the first to point out that Riley’s miss in the seventh round is fresh on everyone’s mind. Brady quickly reminded that he missed the heel throw in the third round as well.

“It’s so late in the week and everybody wants to talk about last night,” Brady said. “But I missed one the third night. It happened to me, too. Basically (stuff) happens. Down here you just gotta move on with it. At the end of the week, somebody is more fortunate that the other guy.”

And their fortunes have been alright this week.

The duo’s eighth place position in the average is the last money hole paid out at the conclusion of the 10th go-round. Eighth in the average pays $6,346, not bad, but not lucrative enough to safety up rather than pushing the limit in the final two go-rounds.

“If you want to win first, you almost need to try and break the barrier,” Riley said. “I’m out of the big money in the average pretty much (first place pays $67,269), so it’s all gas, no brakes.”

“Now’s the point of still getting paychecks for the next two nights and see how the average plays out.”

Five-time defending bull riding world champion Sage Kimzey collided with 2017 bull of the year SweetPro’s Bruiser out of Powder River Rodeo on Thursday. While Kimzey made the eight second whistle for the go-round win, it’s difficult to say that SweetPro’s Bruiser lost the battle. Rather, it’s easy to say the duo danced together for a 94-point score, one off the NFR’s eighth go-round record. It was Kimzey’s second straight round win and kept his hold as the average leader.

Leading up to Kimzey’s ride was a near equally incredible ride and score by Stetson Wright. The Utah cowboy bested Andrews Rodeo’s Diddy Wa Diddy for 93.5 points.

Biglow has an 11-point lead over Tim O’Connell in the average and also pushed his lead in the world standings to more than $65,000 over Orin Larsen.

Last year’s barrel racing world champion Hailey Kinsel has reintroduced herself as the lady to beat for this year’s buckle. Kinsels’ 13.54-second run — the fastest by .01 at this year’s NFR — secured her second straight go-round win and $26,231 paycheck to give her $262,944 on the year. While Amberleigh Moore is second in the world, $54,000 behind Kinsel, it’s most likely third place Emily Miller ($196,991 on the season) who will give the best chase for the crown, according to WPRA statistics. Miller is second in the average, just .12 seconds behind Ivy Conrado-Saebens, while Kinsel is fifth.

Tie-down roping recognized three ropers who split the win on Thursday. Tyler Milligan, Cooper Martin and Riley Pruitt all stopped the clock in 7.5 seconds. Haven Meged continues to lead the aggregate with a 69.3 on eight runs.

Steer wrestler Will Lummus turfed Thursday’s steer in a go-round winning 3.6 seconds for $26,231. Tyler Waguespack kept the lead on eight head with 34.6 seconds, 4.1 seconds ahead of Matt Reeves. Waguespack is third in the world standings but is less than $8,000 behind Ty Erickson in second place and just $12,300 behind current world leader J.D. Struxness ($190,137). Erickson is sixth in the average, while Struxness is 12th.

Brody Cress is having an incredible NFR. The Texas saddle bronc rider has placed no higher than fourth in any round, but he’s placed in every round thus far, which has kept him atop the average for some time now. Canadian Jake Watson won the eighth round with an 89.5 on Calgary Stampede’s Stampede Warrior.

Tonight’s ninth round begins at 7 p.m.