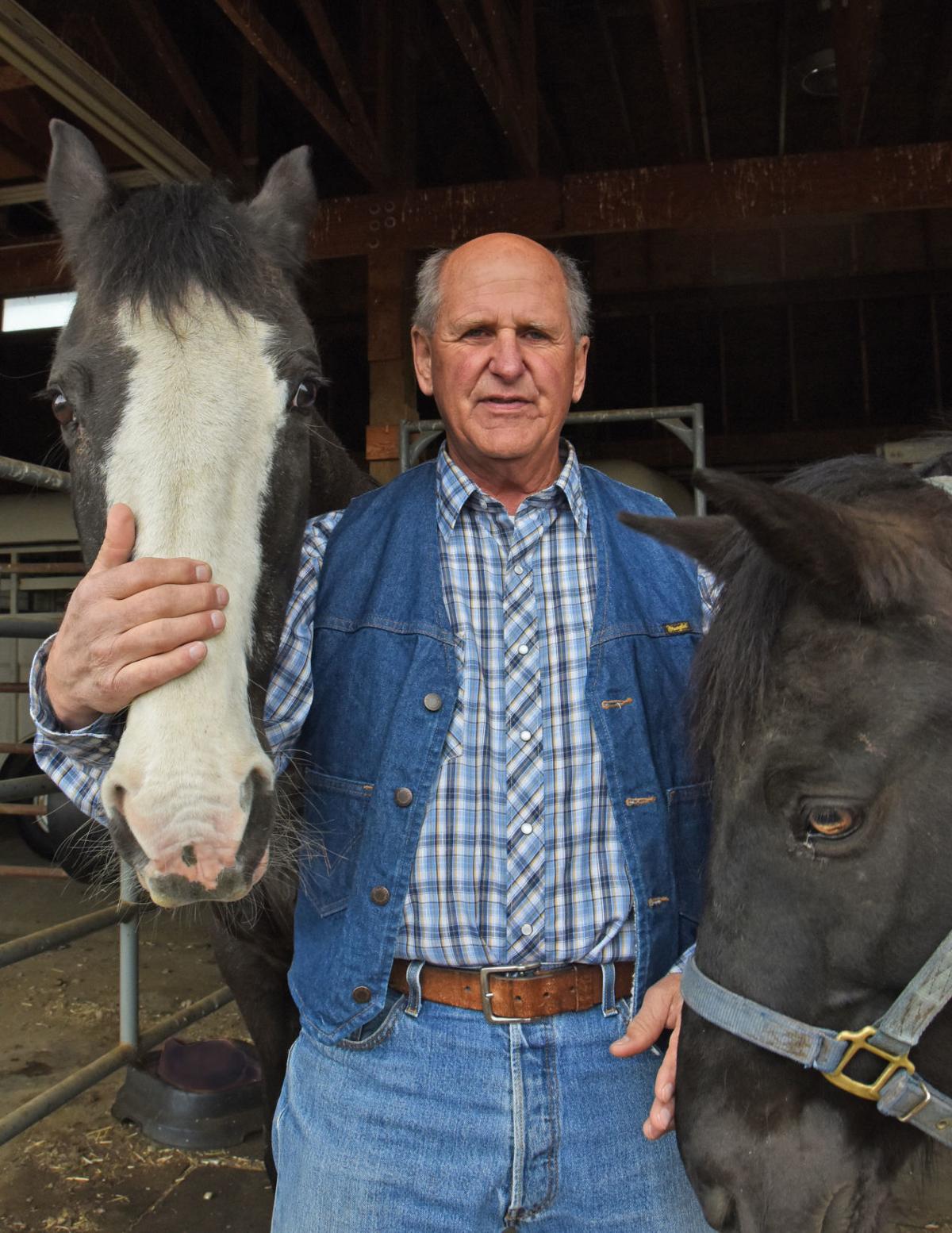 A lifelong horseman, Dr. Fred is shown here with his equine friends at his ranch in Thorp. At the age of 74, he undertook an African safari on horseback. 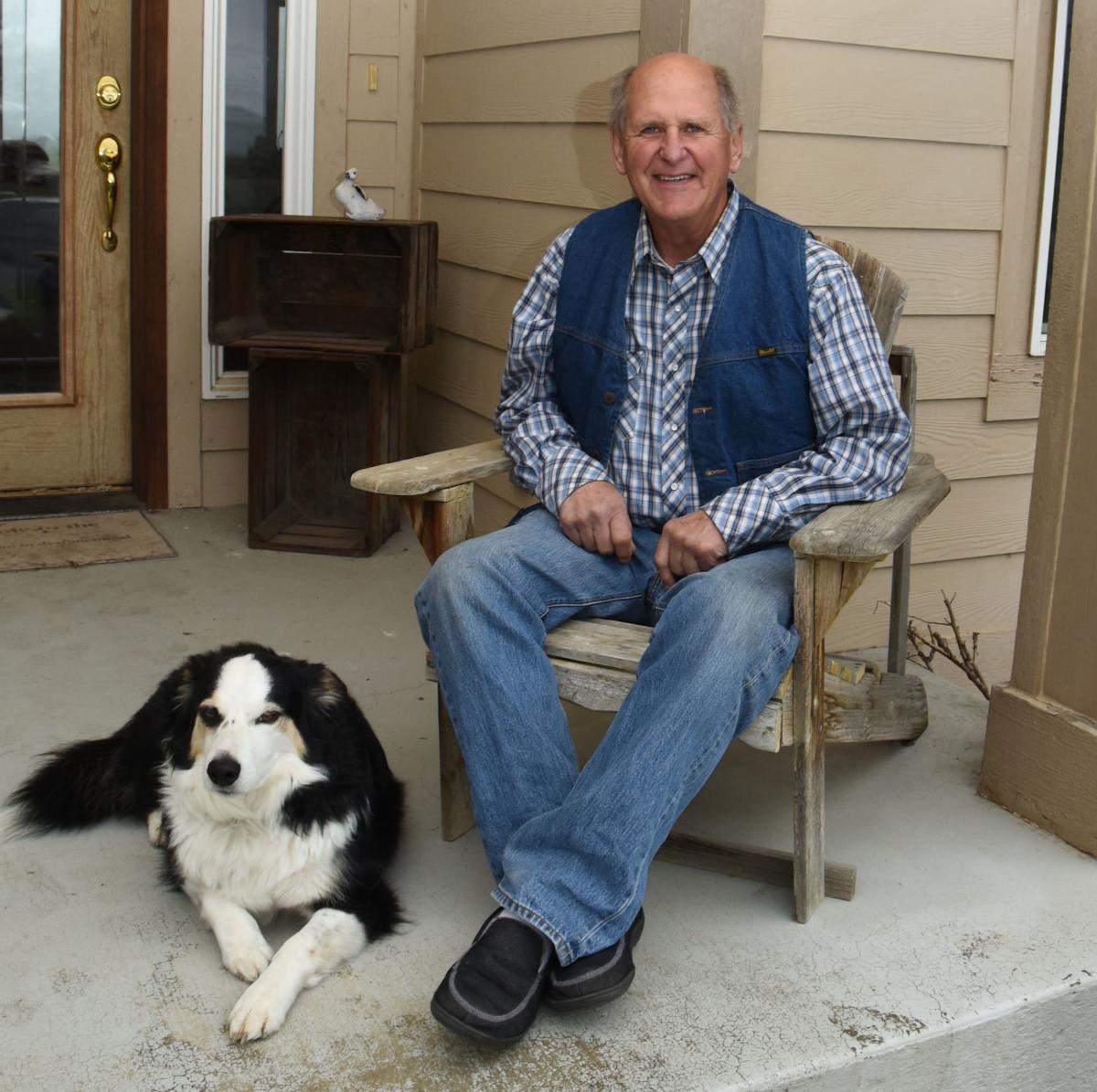 Dr. Fred Newschwander, seen here with his border collie, Piper, will be one of eight local authors signing books at Jerrol’s from 1:30 to 3 p.m. Saturday.

A lifelong horseman, Dr. Fred is shown here with his equine friends at his ranch in Thorp. At the age of 74, he undertook an African safari on horseback.

Dr. Fred Newschwander, seen here with his border collie, Piper, will be one of eight local authors signing books at Jerrol’s from 1:30 to 3 p.m. Saturday.

If Kittitas County has a Dr. Doolittle, it would have to be Dr. Fred Newschwander. The longtime veterinarian has had a healing hand in most areas of animal health and welfare in the valley. If it has fur, fins, feathers, or skin, Newschwander has probably treated it.

For more than three decades, he was the consulting vet for Central Washington University’s Institutional Animal Care and Use Committee (IACUC). Newschwander received the “Force of Nature” award at the CWU College of the Sciences annual banquet.

“Fred has made such a big contribution to Central,” said Jason Irwin, professor of biological sciences. “He’s been our consulting vet since 1983, I believe. And he’s always here, he’s always willing to help — he is like a force of nature.”

CWU, chimpanzees, and other fauna

Beginning in the 1980s, CWU housed group of chimpanzees as part of a human-chimpanzee communication project. Among other things, the primates needed veterinary care. Enter a fearless Newschwander.

“I met Dr. Roger Fouts, his family, and the chimps when they first arrived,” Newschwander said. “Washoe, the matriarch of the colony, had a thing for shoes — she was really taken with my cowboy boots.”

So how does a domestic animal veterinarian become a doctor to primates?

“I read a lot of books,” Fred said with a laugh. “I also talked to the veterinarians at the Woodland Park Zoo, and consulted with Dr. Jim Mahoney, veterinarian at the Laboratory for Experimental Medicine and Surgery in Primates near New York City. I even met Jane Goodall once.”

“I lived through the golden age of veterinary practice,” he continued. “At that time, there wasn’t so much specialization — you really had to know it all, and were expected to keep learning what you didn’t know. You also had to have the confidence to approach people and ask for expert opinions.”

According to strict federal regulations, any research involving vertebrate animals had to be overseen by the Institutional Animal Care and Use Committee (IACUC). The committee approves any use of live vertebrate animals in research and teaching at CWU. Newschwander became a volunteer as a consulting veterinarian in the mid-1980s.

In addition to having provided care for the chimpanzees, he oversaw the use of animals such as mice in a polycystic ovary study, and hamsters in a study for a natural treatment of hookworms. He was on board for monitoring how animals were treated in an I-90 mitigation study.

He, along with the IACUC members, help mitigate risks to human students when they take part in experiments or field studies that focus on animals.

“We have students going to China to study primates,” he related. “Do they have the necessary vaccines for that area of the world? What are the concerns for humans there?”

Although Newschwander is no longer the consulting vet for IACUC, he still volunteers with the committee.

“His roots are so deep in Central, he just knows how to get done whatever needs be done,” Irwin said. “And he’s not afraid to speak up if he has a concern. And he’s just really good.”

While Newschwander didn’t graduate from CWU, he did spend his early education years under the tutelage of a young Amanda Hebeler at what was then known as the College Elementary School — now Hebeler Hall. His father, Dr. W.W. Newschwander, was a member of the science faculty. The family, as was customary at that time, lived on-campus in faculty housing. Fred grew up in a house owned by the university at 1100 N. Walnut St., the present site of North hall.

“CWC (Central Washington College) was small then (1948), about 600 students, and through my father I knew most of the faculty,” Fred said. “The campus was my playground.”

Fred graduated as valedictorian from Ellensburg High School in 1961, and received a scholarship to Wesleyan University in Connecticut, where he graduated with a degree in mathematics. He changed coasts and decided to go for a degree in chemistry at the University of Washington.

Newschwander was drafted in 1966 into the army during the Vietnam War. He found himself working for a commander who appreciated his degrees and knack for logistics, and spent his army career stateside.

It was during his army stint that he had his epiphany about his purpose in life. It occurred to him that he’d always had animals, that he’d spent years around livestock, and he enjoyed the interactions between people and their animals.

After a year of catching up on the prerequisites, Newschwander entered the Washington State University College of Veterinary Medicine. After graduation, he practiced first in Mission, British Columbia, and after six years, made his way back to Ellensburg.

He first opened Mount Stuart Veterinary Hospital in Ellensburg in 1981, and in 1982 opened a second office in Cle Elum. His step-daughter, Valerie Hedrick (Dr. Val) now operates the clinic in Ellensburg.

In addition to his private veterinary practice, (from which he retired in 2011), he worked as a consulting veterinarian to many agencies including the Department of Fish and Wildlife and the Ellensburg Police Department. He was often called out to help law enforcement deal with injured animals.

“It is truly the best of both worlds,” he said. “The animal and its owner are your clients, and that friendship of the owner — that’s the most important part of the whole thing.”

A Day in the Life

This year, Newschwander published A Day in the Life of a Country Vet, which recounts his long, amazing career in service to animals. Written in an easy style with his characteristic self-deprecating humor, the stories range from comical saga of Fred gelding a feisty stallion, to the tenderly poignant tale of Girl, an elderly dog, and her equally elderly owner.

A Day in the Life of a Country Vet can be found at Jerrols, Amazon, the NKC Tribune office and at the Mount Stuart clinic.