You are the owner of this article.
Edit Article Add New Article
You have permission to edit this article.
Edit
Home
News
COVID-19
Newsletters
Rodeo
Sports
Features
Opinion
Calendar
Obituaries
Magazines
Best Of
Classifieds
1 of 2 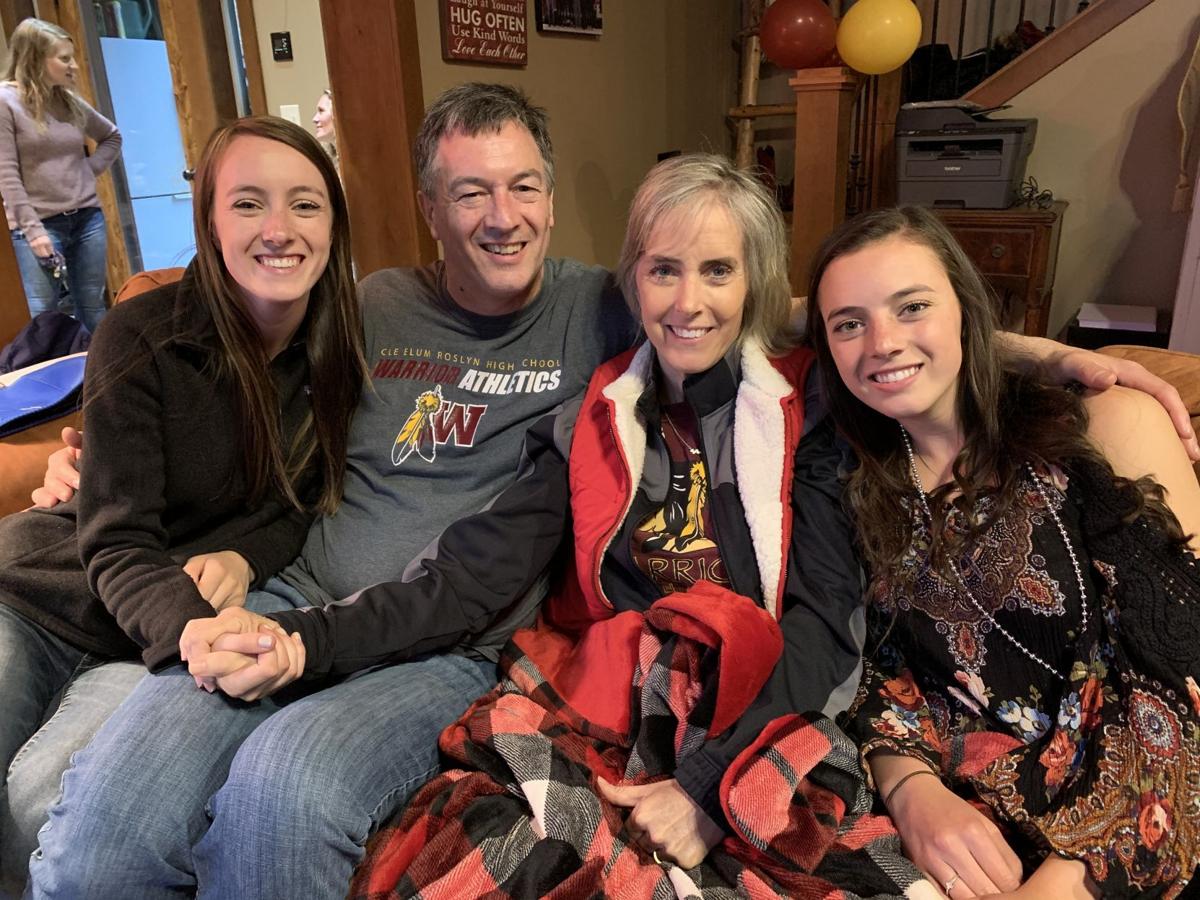 Holly, Eric, Monica, and Grace Terrill sit together on the couch. Monica suffered a subarachnoid hemorrhage because of a ruptured brain aneurysm in the anterior communicating artery on Feb. 25. 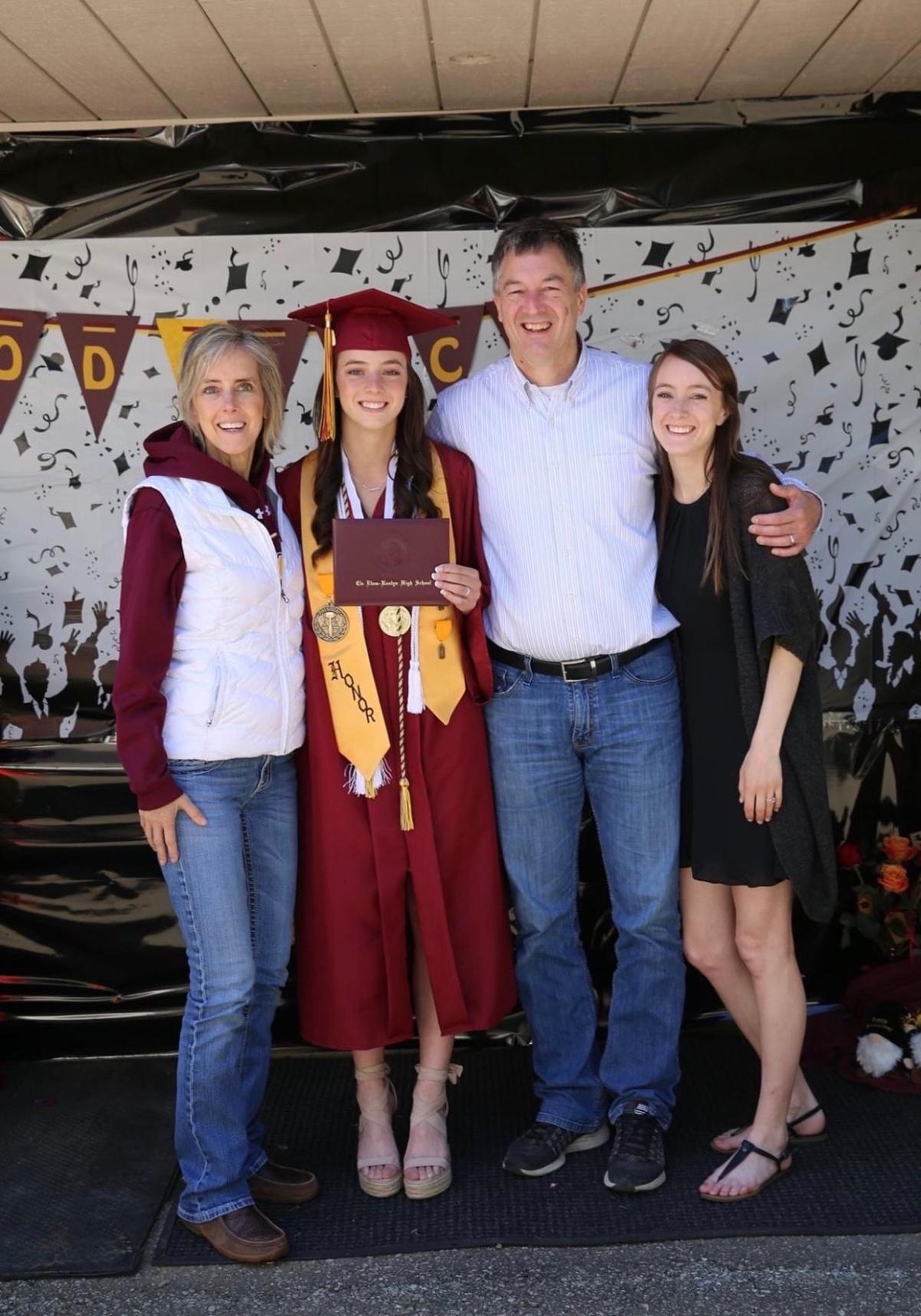 Monica, Grace, Eric and Holly Terrill pose together for a photo after Grace’s graduation from Cle Elum-Roslyn High School.

Holly, Eric, Monica, and Grace Terrill sit together on the couch. Monica suffered a subarachnoid hemorrhage because of a ruptured brain aneurysm in the anterior communicating artery on Feb. 25.

Monica, Grace, Eric and Holly Terrill pose together for a photo after Grace’s graduation from Cle Elum-Roslyn High School.

CLE ELUM – Nearing the end of a Daily Record phone interview with Grace Terrill and Eric Terrill on the recovery of Grace’s mother and Eric’s wife, Monica, there was an interruption on the other line.

Monica had joined in and succinctly shared a few words on how blessed she was and her gratefulness of the community’s abundant support. And when asked how she was feeling today, Monica, of course, dished out a touch of humor.

“I feel good to be aliiiiivve,” she said with a lilt.

2020 has been a whirlwind for everyone, but perhaps the Terrill family has experienced the brunt of it. On February 25, just weeks before the coronavirus pandemic enveloped in the United States, Monica suffered a subarachnoid hemorrhage because of a ruptured brain aneurysm in the anterior communicating artery (enlarging in a blood vessel that can leak or rupture, causing bleeding into the brain) and was immediately admitted to Harborview Medical Center in Seattle for surgery to stop the bleeding.

For two weeks, the Terrill family felt plenty of uncertainty considering the severity of it (Hunt and Hess Grade 4). According to the American Stroke Association, once the aneurysm bleeds, the chance of death is roughly 40%. But in Monica’s case, the odds were even worse.

“Hearing that your mom has a 3-in-10 chance of living is really hard,” Grace said. “And that was the first night we got there and we still didn’t really have a grasp on how precarious her state was. For two weeks, she could have died right there just because of the type of brain aneurysm she had.”

Monica had peaks and valleys in her recovery but eventually was well enough to transfer out of the intensive care unit (ICU) on March 25. Five days later, Monica was admitted to the Providence Regional Medical Center’s inpatient rehabilitation in Everett.

Because of the pandemic, Grace and her older sister, Holly, were asked to leave when Monica was still in ICU and Eric not long after. And they still weren’t allowed to see her in the inpatient rehabilitation. But the Terrill’s used a Facebook Portal to check in on Monica daily.

“It was extremely stressful,” Eric said. “We were able to portal in — through Facebook Portal — we communicated a little bit, but had to wait until a nurse could connect you because Monica wasn’t capable of that.”

“Even when she got to the rehab place, she was not capable at all,” Grace added.

Monica avoided paralysis with the aneurysm rupture and physically, it’s “going really well” in her recovery, according to Eric. But they are continuing to build her cognitive and occupation skills.

“In this his type of brain injury, it’s very hard for them to put multiple tasks together,” Eric said. Find a toothbrush, find the toothpaste, water, where is it located. A multitask thing, it seems very basic but where you have a brain injury like this, your brain is not very good at always figuring it out.

“Part of what we work on is that side, occupational, being able to get dressed, go to the bathroom and shower yourself. Then you go into trying to build up, can you cook for yourself or not? Can you do laundry? All the basic functions. She’s got significantly better but it’s a slow process.”

As for the cognitive side with short-term and long-term memory, “it’s a long, long road,” according to Eric. But since she’s been home, she’s taken positive steps and will continue to improve over time.

This year continues to be a stressful and arduous one for Grace, who already lost the final months of her senior year at Cle Elum-Roslyn High School and without formal graduation, too. But she looks at the brighter side — having the opportunity to help care and spend time with her mother.

“With her having this injury, I don’t know if I would have changed how I got this extra time with her,” Grace said.

Grace, who ended up five goals shy of the state record (166), should have been at her mother’s alma mater by now gearing up for the 2020 season. Grace committed to Eastern Washington University soccer in the fall of 2017 after early offers from Idaho and Central Washington.

But the coronavirus pandemic continues to shutter fall sports around the county, and after the Big Sky postponed football last week, EWU decided to nix fall athletics on Monday.

The 2020 season for women’s soccer should have commenced with an exhibition against Washington State on Aug. 14, but all non-conference games were canceled. And the previous tentative slate had EWU opening the season on the road versus Northern Arizona on Oct. 2 — but that’s all changed.

No school and formal graduation, her mother’s severe brain injury and now having her freshman year postponed. Grace surely is ready for 2020 to end.

Amid Monica’s subarachnoid hemorrhage and deliberate recovery, the community clearly showed its affinity for the Terrill family, who are deeply connected with many in the Upper County.

Organized by close family friend Kelli Jackson and two others, a GoFundMe page was created on March 5 and raised $31,285.

“It’s pretty humbling,” Eric said, who had to pause for a few seconds to gather his thoughts. “The amount of support we received from friends, family, the community, people we don’t even know. The only word I can think of for me is humbling. I guess we’ve always been on the giving side and so, I don’t even know how to express to people how appreciative you are of the support.”