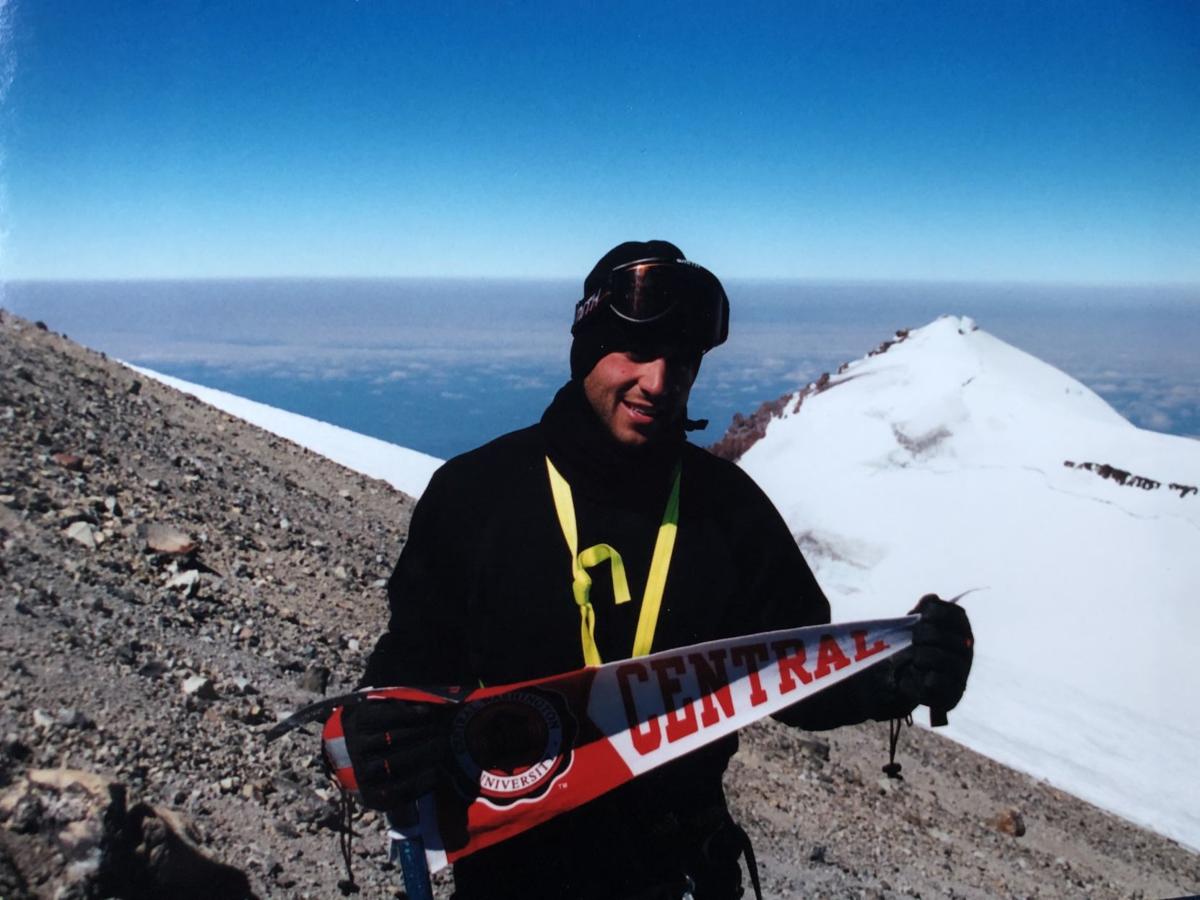 Brandon Rinta stands on top of Mount Rainier, one of his four successful attempts reaching the summit. 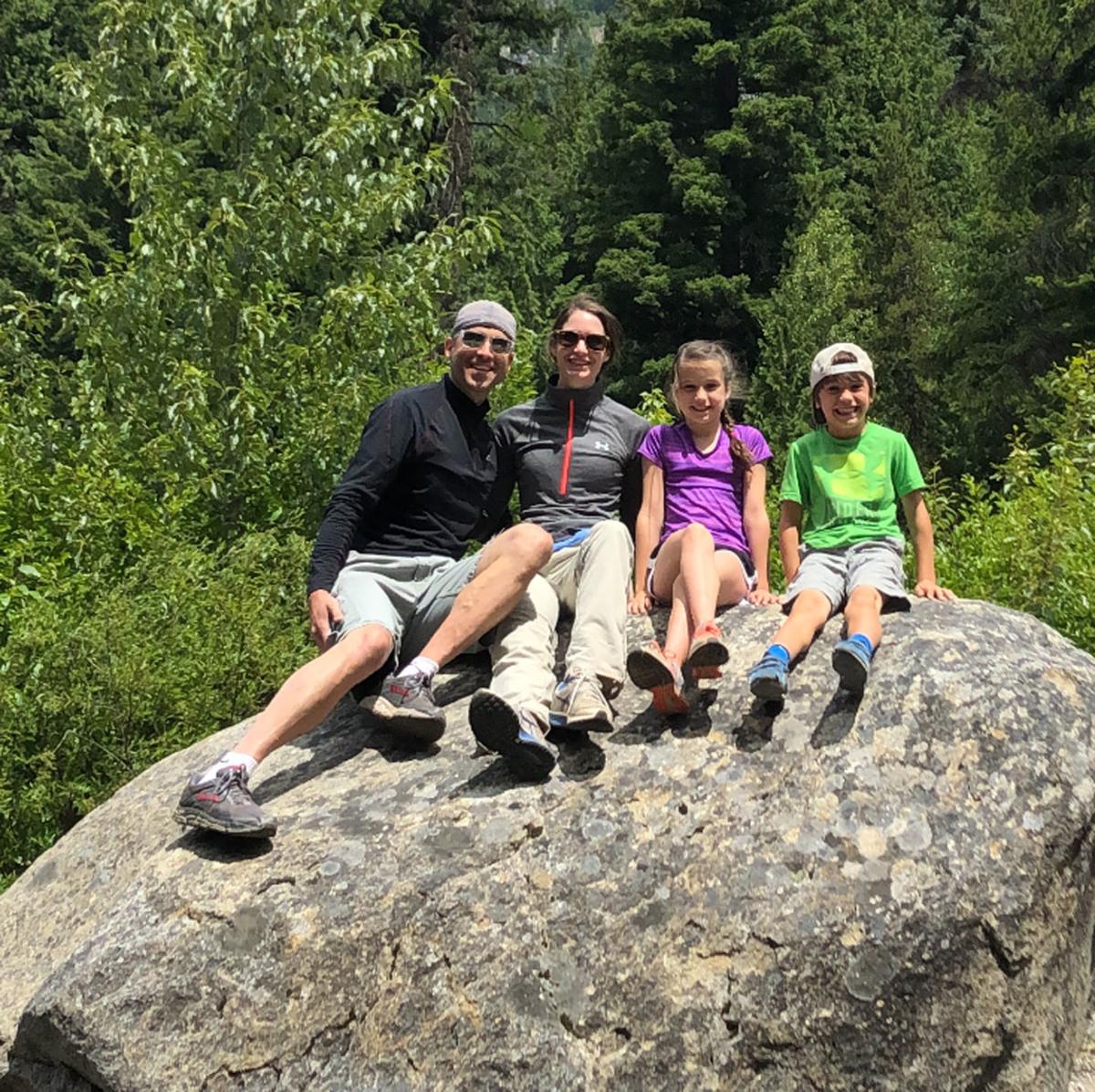 Brandon Rinta stands on top of Mount Rainier, one of his four successful attempts reaching the summit.

Taking a brief glimpse at Brandon Rinta’s garage, it wouldn’t be easy to identify he’s spent nearly 20 years coaching in the college ranks.

Ample of basketball memorabilia doesn’t fill the shelves and cover the walls. Instead, the Rinta family garage is brimming with outdoor gear and equipment.

It’s a lifestyle for Rinta, his wife and two kids, and one many might not know about the upcoming third year Central Washington University men’s basketball head coach. But the outdoors life, whether it’s camping, kayaking, hiking, rafting, mountaineering and much more, it’s a custom he’s just as passionate about as he is on the floor.

And if lucky enough to join Rinta on an escapade, you’ll come upon another side of the earnest coach. Sammy Henderson experienced it first hand after a family camping trip to Lake Wenatchee last summer.

“I first met Brandon briefly for a few months when we worked together and he was just a serious dude. It took me a while to crack the surface because he’s hard to read, I can’t tell if he thinks something is funny or not. It took a while,” Henderson said, who’s a former CWU sports information director. “Our campsites were maybe 75 feet away from each other and they just had all the gear — they put us to shame. You could tell this was their element, this wasn’t their first time. He (Rinta) kind of lets his guard down. You could tell he was comfortable.”

Coaching at the collegiate level is demanding and consuming, and Rinta has always found a release with the outdoors throughout his life when given the chance. A Chehalis native, he grew up camping with his father and grandfather, who enjoyed hunting and fishing. Rinta never latched on with hunting, but spending time outdoors early on is how he gained affinity.

“I worked for my grandpa out in the woods, he owned a logging company and spent a lot of time outdoors and that kind of ingrained in me just a passion for being outdoors,” Rinta said.

By the time he arrived at CWU in 1998 after transferring from Yakima Valley College, he connected with teammate Justin Bursch and the two took outdoor exploits to the next level after the 1999-2000 basketball season.

After Rinta and Bursch, along with former teammate Damien Chapman, trekked down to Zion National Park in Utah to camp, rock climb and canyoneering, it was the beginning of a lifelong friendship and many adventures to come.

“So, we bought a book about it and read about how to climb Mount Rainier,” Rinta said.

And Bursch was their guide.

“I’ve read all the main books on mountaineering, I know how to tie all the knots, I know how to keep us safe in terms of roping up and I can teach you guys the knots. I got most of the gear,” Bursch said what he told Rinta and Chapman.

Before the climb, there was a three-hour learning session at Rinta and Chapman’s apartment, studying different knots and attaching harnesses. Then began hiking with backpacks full of equipment, but not often, says Bursch.

“I think that was only the second time Damien had ever even had on a backpack in his life, other than a school backpack,” Bursh cackled, who’s now a movie producer in Hollywood, California.

There were plenty of hiccups on the climb, but despite the arduous journey, they summited it.

“Without a doubt, it was the dumbest thing I have ever done in my life,” Rinta said, who attempted Mount Rainier five more times, and out of the six, has summited it four. “Just thinking you can read a book and climb Mount Rainier. That’s what you do when you’re 22, 23 years old, your brain is not firing on all cylinders. It was quite an experience ... it was. We had no idea what we were getting into but we made it to the top and we made it back.”

For the next several years, Rinta and Bursch went backpacking in Europe with other teammates for 78 days (returning on Sept. 11, 2001, hours before the terrorism attacks), scuba dived in Thailand and Hawaii, ice climbed in eastern Montana, ran with the bulls in Pamplona, canyon swung in Switzerland 295-feet up and spent two weeks at Corcovado National Park in Costa Rica and Brusch says, “we would purposefully just get lost up in the jungles.”

These are only a few of the indelible memories Rinta and Bursch share. Together, they have visited 13 countries and most western states.

“There was a five or six-year stretch there where we did a lot together,” Rinta said. “He was my partner and to this day he’s my best friend.”

Now, Rinta is sharing these experiences with his own family all around the Pacific Northwest, now that his kids are 8 and 9 years old.

Recently, the Rinta family found a hobby of mountain biking after being introduced by Rinta’s friend, Jeff Monahan. It’s absorbed their time over the last six weeks with rides in Leavenworth, Manastash Ridge and parts of the West Side. They have plans to go to Icicle Creek Canyon in Leavenworth this weekend.

“Now, we’re getting into a place that we can do it as a family,” Rinta said. “That’s kind of what over the last month been trying to get ourselves into a position we can mountain bike as a family and been having a blast with that on the weekends.”

His wife, Deanna, only request on overnight trips is a bathroom. Rinta and his son, Shea, went on their own excursion a few weeks ago over to the Teneaway and camped a couple of nights and came upon a makeshift bathroom. The next weekend, the family returned together.

“We’ve been really been blessed through this COVID quarantine, to be in Ellensburg to have this much space around us. But at the end of the day, we’ve been quarantined and so just being able to give him and his 9-year-old sister (Kendall) a break from each other and kind of split the family in half and go our separate directions,” Rinta said.

Outdoors was instilled in Rinta early on and it’s a “gift” he wants to return to his kids as well, especially with the beauty of the Pacific Northwest and living in the heart of Washington where no adventure is too far away. He especially loves being near the Stuart Range.

“To be able to unplug and go camping when you’re away from all that (referring to internet, television and social media), it’s been some of our best memories as a family so far,” Rinta said.

“It’s definitely a huge part of who I am,” he added. “And it’s a big part of what keeps me balanced. Coaching college basketball is so all-consuming, and it can be all-consuming if you allow it to. Getting outdoors, whether it’s on the river, whether it’s backpacking, whether it’s mountain climbing, surfing, or biking, that’s my outlet — that’s my release. That’s where I really get a chance to unwind and breathe a little bit.”

Rinta especially relishes being out on the waters kayaking and claims it “stuck” with him the most. When he was coaching at Northwest Nazarene, he spent a lot of time on the South Fork of the Payette River.

Shea’s beginning to take on his father’s beloved passion, too.

“He cannot wait to start kayaking,” Rinta said, who’s a Class 4 kayaker. “He’s actually got this little sit on top kayak. Most people are using it at lakes and at age 6, he was taking it down the Yakima River himself. Once he’s able to swim in rapids which is probably (at) 12, I want to get on some overnight river trips on the Middle Fork of the Salmon, the Colorado River down south. Those are two things at some point we’re going to do as a family.”

“I think that there are lessons that you can learn that is very similar to the lessons that you learn from sports and what we do as a team every basketball season and the things that I hope to instill in my players,” Rinta said. “I’m not so concerned about instilling in my kids through the game of basketball as I am through outdoors as far as pushing yourself beyond your limits. When we go hiking or camping … pushing yourself outside of your comfort zone as far as when you’re on the river and you’re going through rapids, and just being able to push yourself and being able to deal with fear. Those are valuable lessons you can learn from the outdoors.”