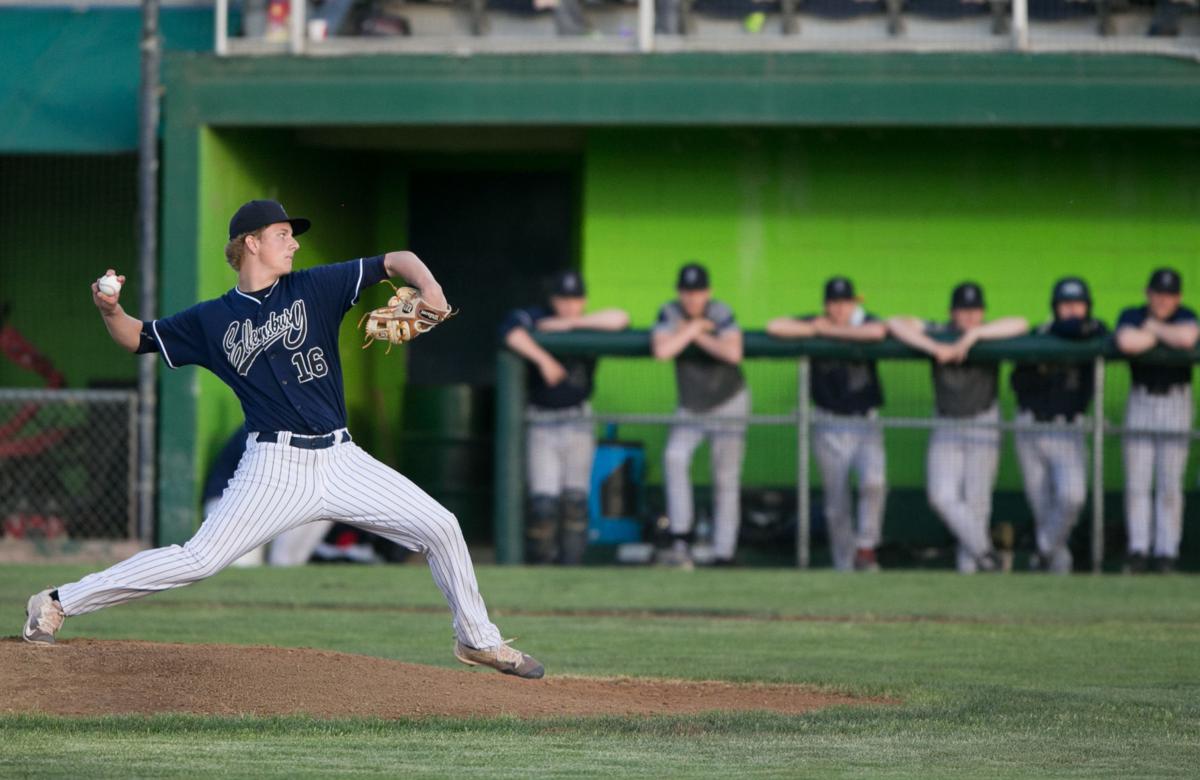 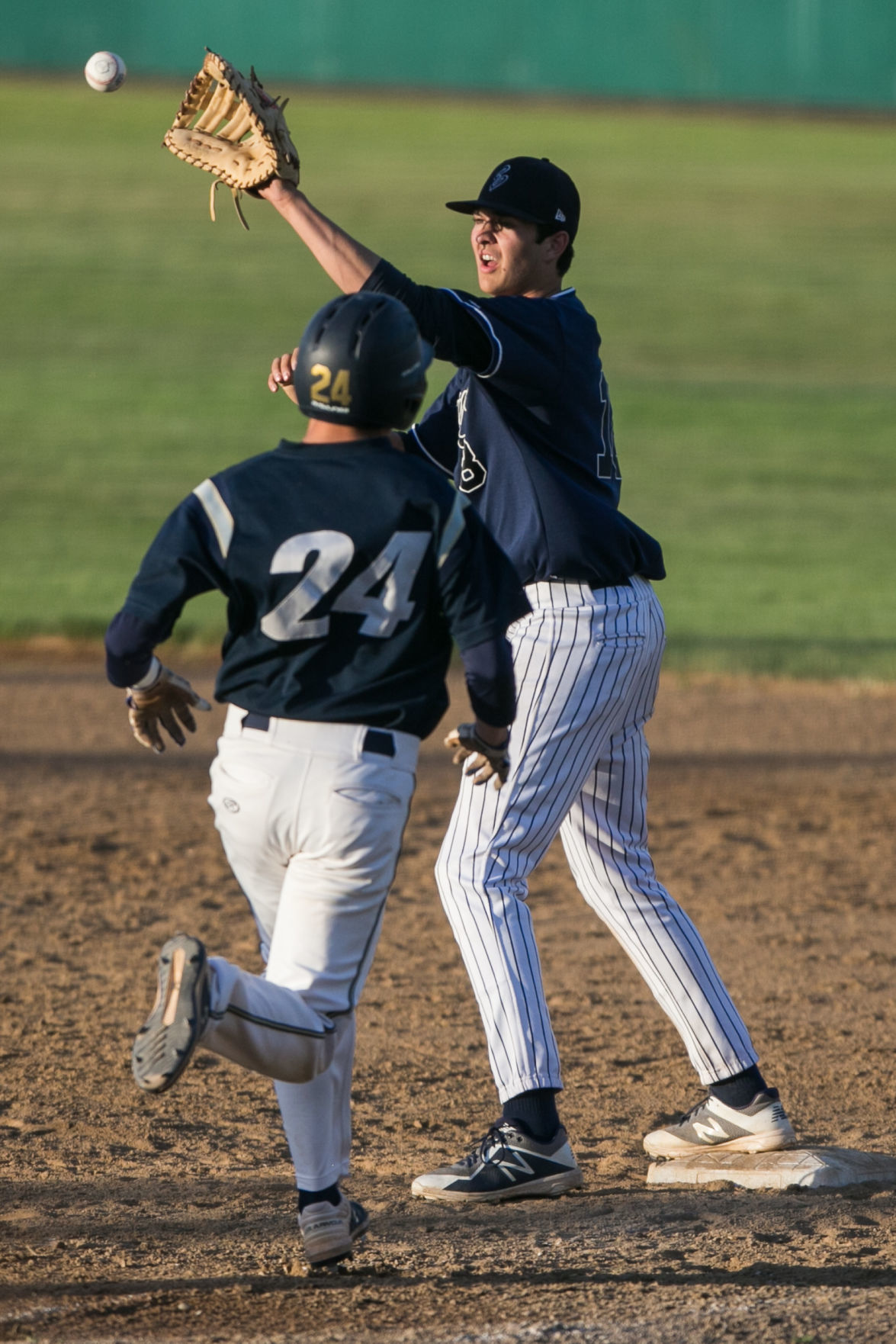 Ellensburg High’s Hunter Gibson (18) takes the throw at first as Selah High’s Brandon Burner (24) runs to the bag during a CWAC championship game on Tuesday at Yakima County Stadium in Yakima. 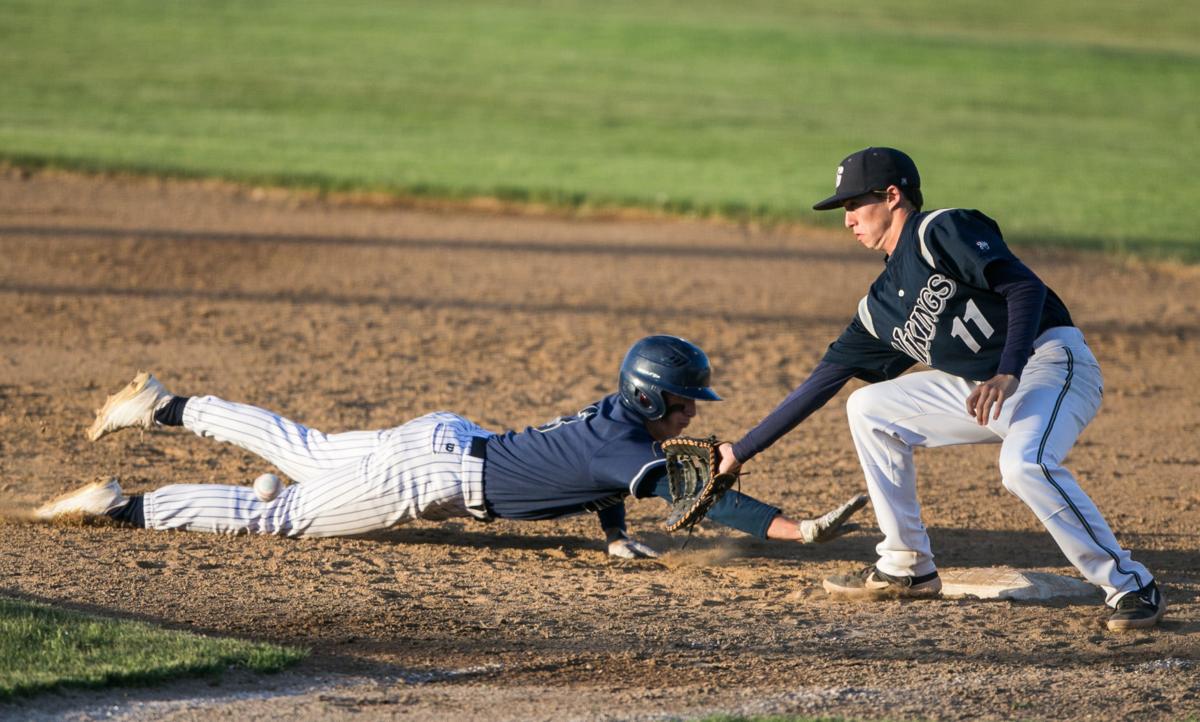 Ellensburg High’s Hunter Gibson (18) takes the throw at first as Selah High’s Brandon Burner (24) runs to the bag during a CWAC championship game on Tuesday at Yakima County Stadium in Yakima.

YAKIMA – The Ellensburg High School baseball team has endured this path for many years now — five to be exact.

The No. 2 Bulldogs and No. 1 Selah High School squared off for the sixth consecutive year in the District 5/6 Championship and once again, Ellensburg had to observe the Vikings hoist the district trophy in a 4-3 decision.

But that means nothing to Ellensburg (16-6). Sure, a district win would give it an automatic berth to state and not have to worry about playing a loser-out cross over game with a GNL team. But there’s other hardware the Bulldogs are focused on.

“The last two years we have won state, so if losing a district championship means we can win state again, it doesn’t faze us at all,” said Davis Spencer.

Hard to beat back-to-back state championships. As for Selah (20-2), it couldn’t have been any worse. After beating Ellensburg the past two seasons in the district title game, it has fell in the first round for two straight years — and one of them to Ellensburg.

Winning districts can have its cons. While EHS head coach Todd Gibson claimed it would be nice to win, having 10 days off when teams are in a pattern of playing a couple times a week can throw a team out of rhythm.

“… At this point in the season you’re used to playing. So, we played Tuesday night and we’re used to playing on Saturday, and this one just means if we don’t win were done, but if we do win, we’re all back to even and we’re in the routine,” Gibson said.

Gibson’s conversation with the team afterward discussed the mistakes that cost them and the missed opportunities. He also gave them 24 hours to disregard the loss and get back to work.

It can be mentally tough to fall to a conference arch rival again, but Ellensburg seems to put it in the past them and focus on what’s ahead.

“Something about our boys, they show up — and I’ve said it over and over again throughout this week of practice — and get it done,” Gibson said. “They know they have another opportunity to play.”

Ellensburg looked like a different team compared to when the two teams met back on March 30 in Selah’s drubbing victories of 6-0 and 11-2.

The game on Tuesday was in the Bulldogs’ hands, clinging on to a 3-1 lead in the bottom of the sixth inning with Spencer on the mound. Carter Young popped up to short and it seemed to be a routine play for Brady Helgeson, but it bounced off his glove and Young hustled all the way to second base with no outs.

With one out and two on, Brandon Bruner singled to left to score one, and the next Selah batter used a sacrifice to even the game. Then a soft blooper to right gave the Vikings a definitive lead, 4-3.

“There isn’t anybody else in the infield that would want to try and have catch that, but it’s a mile high and it happens,” Gibson said.

And the Bulldog bats didn’t take advantage of some scoring opportunities. Twice the Bulldogs had the bases loaded with no outs and came up with a total of one run. And that one run came when Jadon Bugni hit into a 6-4-3 double play in the top of the third inning.

The latter was in the fourth. Riley Seed and Spencer both had singles, and Hunter Gibson was walked to load them. But the next three batters couldn’t score them.

“What I told them, ‘it wasn’t one play that cost us, so get that out of your head,’” Todd said. “We didn’t hit with the bases loaded and no outs, scored no runs that inning.”

Spencer was mowing through the Selah lineup, retiring the first eight batters and getting through three innings with giving up just one hit.

He ran into trouble in the fourth though, as Young and Andreas both clubbed back-to-back triples, 3-1. Nate Gutierrez tagged one to center field, but Seed laid out and Andreas mistakenly thought it would drop and didn’t tag up, so he had to scamper back to third.

Andreas then was thrown out at home from Helgeson, and Spencer got the third out with a grounder, limiting it to one run when it could have been much worse.

Spencer pitched six innings, surrendering four runs (one earned) on five hits. He struck out four and walked none.

“I knew I had the best defense in the state behind, it’s always reliable when you know you got that,” he said. “Just the fastball, throw it down the middle and let them hit it.”

The Bulldogs scored two runs in the second inning. Tyler Polacek drove one up the middle and Seed sent a hard ground ball down the third base line to put him and Polacek in scoring position. Spencer and Hunter Gibson each brought them home.

Ellensburg will host Pullman High School at 1 p.m. this Saturday. Winner to state, loser out.