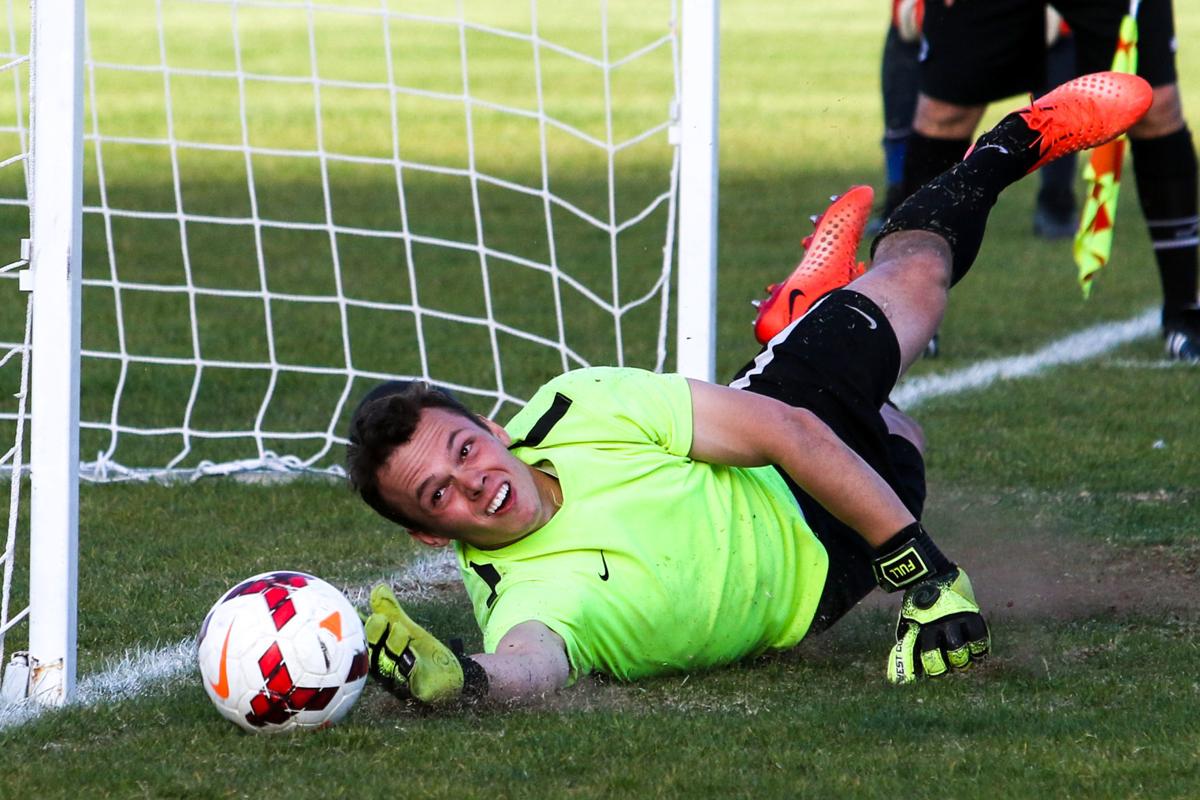 Ellensburg’s Connor Timko makes a diving save to win the CWAC soccer semifinals game against Selah Friday in Selah, Wash. Ellensburg won in a shootout 4-3. 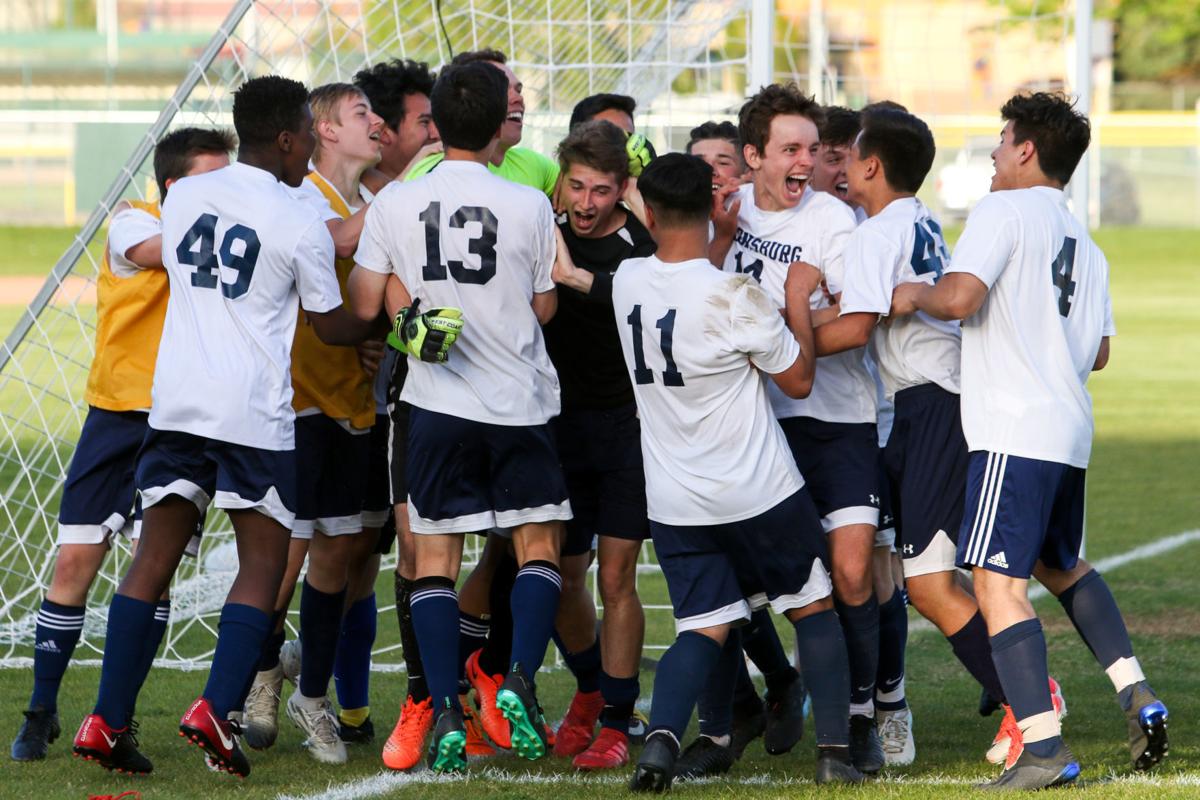 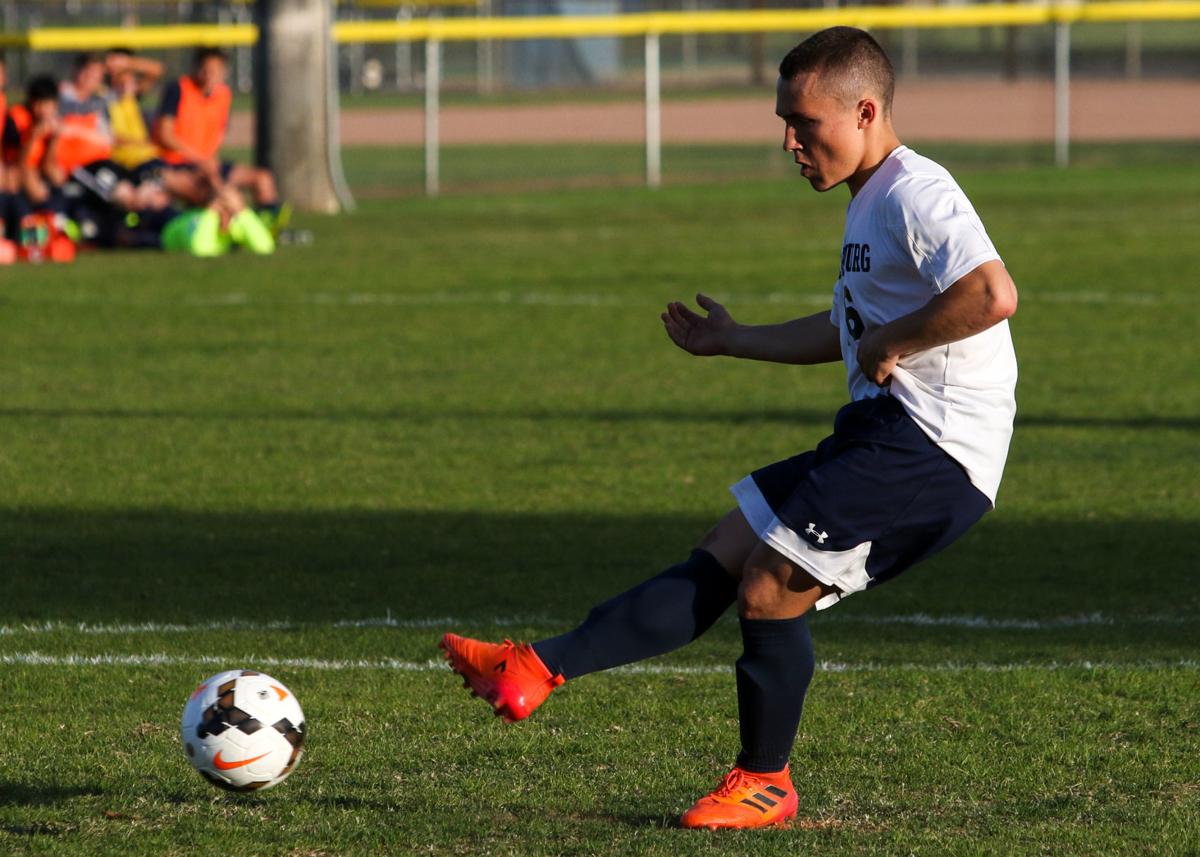 Ellensburg’s Fisher Bachman-Rhodes, 16, kicks the soccer ball to score a goal during a shootout Friday during the CWAC soccer semifinals game against Selah in Selah. Ellensburg won in a shootout 4-3. 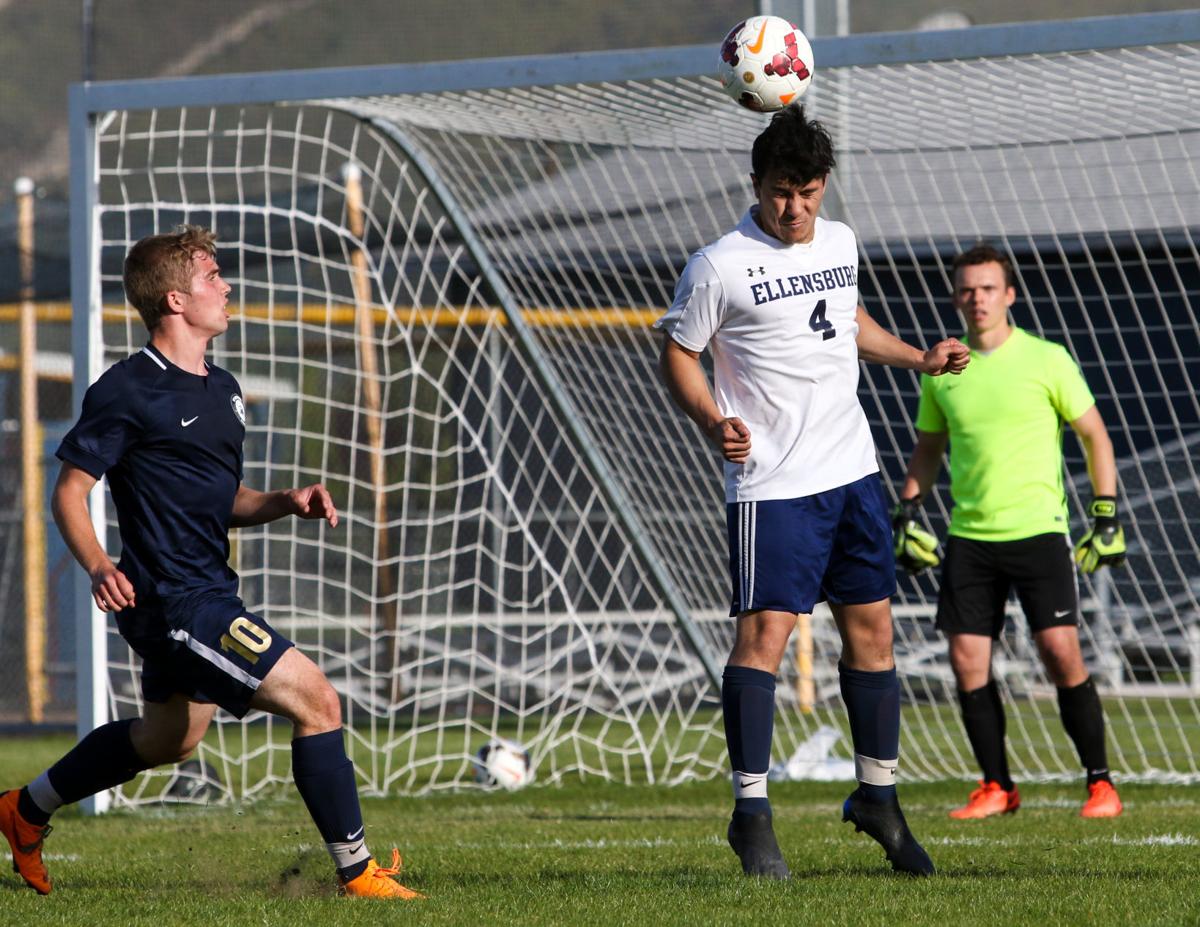 Ellensburg’s Antonio Magana, 4, hits a header Friday, May 3, 2019 during the CWAC soccer semifinals game against Selah in Selah, Wash. Ellensburg won in a shootout 4-3.

Ellensburg’s Connor Timko makes a diving save to win the CWAC soccer semifinals game against Selah Friday in Selah, Wash. Ellensburg won in a shootout 4-3.

Ellensburg’s Fisher Bachman-Rhodes, 16, kicks the soccer ball to score a goal during a shootout Friday during the CWAC soccer semifinals game against Selah in Selah. Ellensburg won in a shootout 4-3.

Ellensburg’s Antonio Magana, 4, hits a header Friday, May 3, 2019 during the CWAC soccer semifinals game against Selah in Selah, Wash. Ellensburg won in a shootout 4-3.

SELAH — All year long, head coach of the Ellensburg High School boys soccer team conveyed that it was about winning the moments in the game, whether that comes on the offensive or defensive side.

Last Tuesday against East Valley High School, it was Tizoc Barbosa’s penalty kick in the final minutes of the game to advance the Bulldogs into the next round. It was also Connor Timko’s stellar saves late in the second half to keep Ellensburg in the game.

And boy, did No. 4 Ellensburg win its moments in the district semi-final versus No. 1 Selah High School.

In the overtime penalty kick shootout on a best of five, Selah had its final chance to force another shootout with Ellensburg already making 4-of-5.

Timko didn’t allow that to happen. His diving save to knock the ball away sealed the 2-1 triumph and sent the Bulldogs to the Central Washington Athletic Conference District Championship.

He stood motionless, waiting for his exuberant teammates, crowd — and father — to swarm him.

“It was just my moment,” Timko said, who finished with six saves. “It’s just something we been talking about all season since the first day of practice. Finding your moment in the game — and I found mine today. That was my moment.”

After the Vikings (11-3, 8-2 CWAC) scored in the 66th minute, the game looked as the Bulldogs (10-6, 6-4 CWAC) would be heading to the loser-out bracket, making the journey to state much more difficult.

But a handball in the box gave Ellensburg an opportunity at a PK in the 77th minute. And for the second time this week, Barbosa had his moment. He scored to even the contest 1-1.

After two five-minute overtimes, the game was sent to PK’s. Riley Timko, Liam Schedler, Barbosa, Fisher Bachman-Rhodes all nailed their attempts. Selah made its first three and on the fourth it hit the top of the cross bar. Joahan Baldovinos had an opportunity finish it off, but his also ricocheted off the crossbar.

And on Selah’s final try, Connor put the game away.

“I think Selah overall is the better team, that’s probably better coached,” Ellensburg head coach Mark Timko said. “And so, the longer we can make the game go and stay close, I felt the pressure would build on them as the No. 1 seed. We’re just a bunch of farm town kids playing soccer. We’re just happy to be here.”

Before the PK’s, Mark had a conversation with Selah’s head coach Josh Koreski. Regardless of the result, that defined a true competitive match.

It was an emotional victory for Ellensburg, especially for Mark, as he has coached a bulk of these players since they were in fourth grade. Tears slowly built up in his eyes when he was asked about seeing his son Connor make the game-winning save.

“It’s proud to see all these boys, not just my son in the big moments,” Mark said. “Because I have coached a lot of them since they were 9 or 10. They have never experienced this before, so I’m happy to be with them on the ride. I’m happy they will have lots of stories to tell when they are old.”

Ellensburg normally runs a 4-4-2 formation, but switched to a 4-5-1. The Vikings dominated the midfield in its 1-0 victory the first time these two teams met on April 9, so Mark wanted to make some permutations.

The switch proved to be beneficial.

Ellensburg will face No. 2 Toppenish High School for the district title at 7 p.m. on Tuesday at Grandview High School. The winner advances to state, loser will go to the crossover game with a Great Northwest League team.