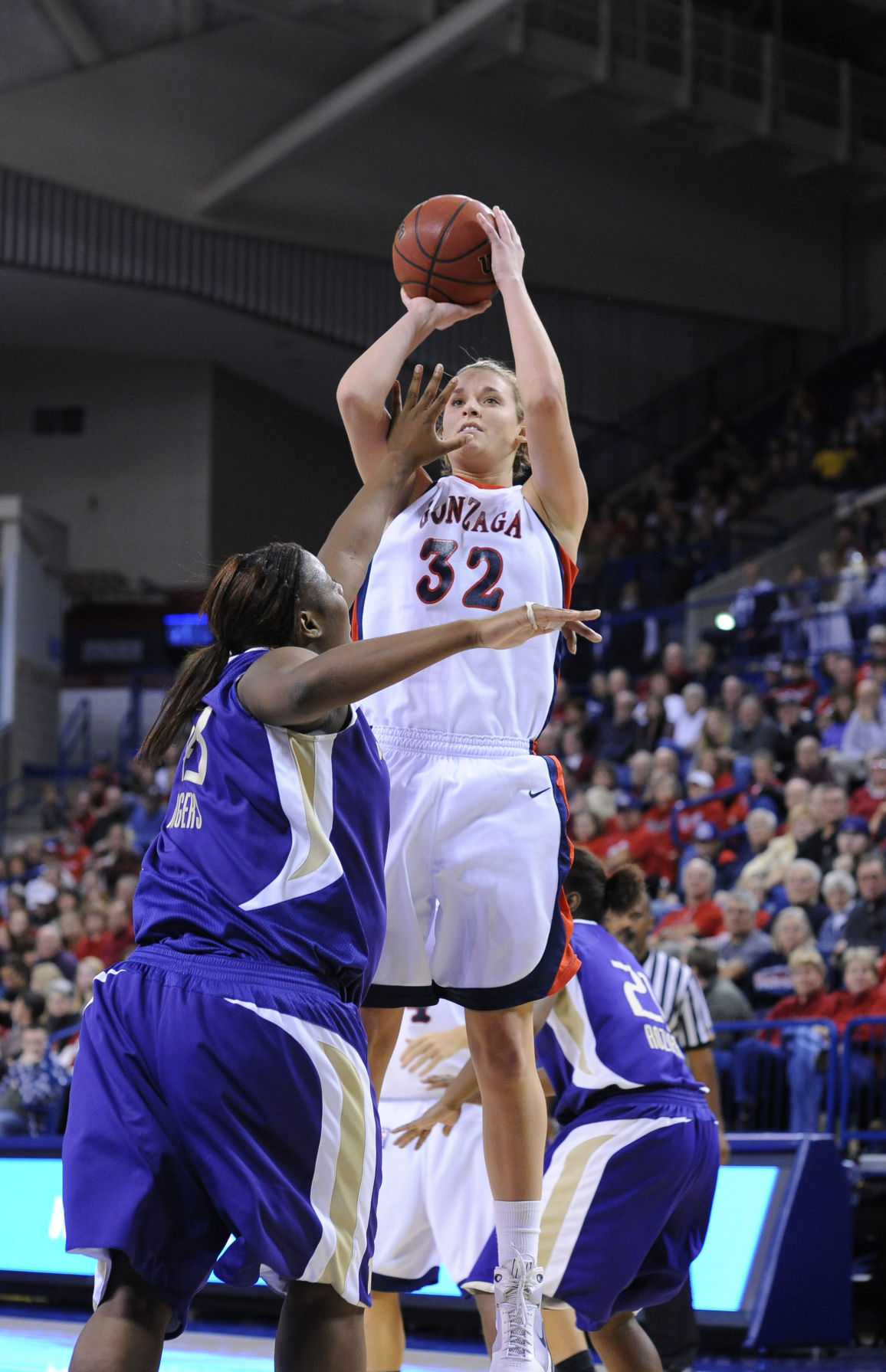 Kayla Steindl (formerly Standish) pulls up a shot with the Gonzaga women’s basketball team. Steindl will be inducted into the Ellensburg High School Hall of Fame, class of 2019. 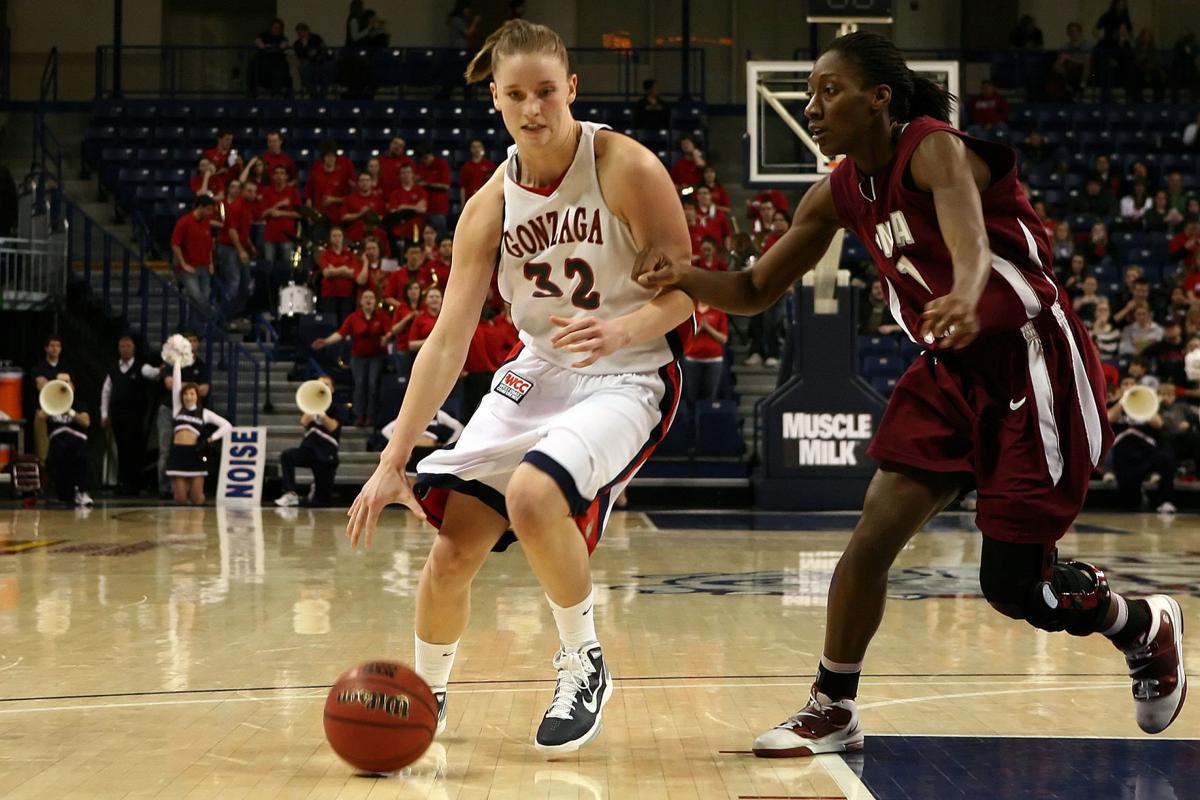 Kayla Steindl (formerly Standish) dribbles during a game with the Gonzaga women’s basketball team. Steindl will be inducted into the Ellensburg High School Hall of Fame, class of 2019.

Kayla Steindl (formerly Standish) pulls up a shot with the Gonzaga women’s basketball team. Steindl will be inducted into the Ellensburg High School Hall of Fame, class of 2019.

Kayla Steindl (formerly Standish) dribbles during a game with the Gonzaga women’s basketball team. Steindl will be inducted into the Ellensburg High School Hall of Fame, class of 2019.

When Kayla Steindl (formerly Standish) was asked how Ellensburg High School shaped her into the person she is today — on and off the court — it took her a moment to respond.

One of the most decorated athletes in EHS history, Steindl faced some of the most difficult times in her life off the court. But her confidants at EHS provided succor with those struggles, helping her earn a scholarship to the Gonzaga University women’s basketball team where she thrived — just like she had done at EHS.

Steindl has been inducted into the EHS Hall of Fame, class of 2019. A 2008 graduate, Steindl was a three-sport athlete in basketball, volleyball, and track. She was part of three volleyball and three basketball teams that placed at the state tournament and was a prolific track athlete who earned 10 medals in three events at the state meet throughout her high school career.

On the court, she was twice named the MVP of the state tournament in her junior and senior seasons.

As a junior, Steindl notched 84 points in four games, which was the most points scored by one player in the tournament. She also corralled 55 rebounds to go with her MVP honors.

In her senior season, EHS placed second at state and she once again earned MVP. She was an alternate to the McDonald’s All-American team.

She scored 2,076 points in her high school career.

Steindl had adulation for the school itself, but also her former coach Craig Faire who, too, will be inducted into the EHS HOF this year.

“Even though she lives in a big city now, she’s a country girl — she’s a small-town girl. By being in a, what I would consider a smaller school like Ellensburg, she had a lot of support with her academics and her sports,” said her father Dave Standish. “You get a lot of personal contacts. Academically, she was helped a lot by Kerri Fahey, Debbie Rowden, and of course basketball with Craig Faire.”

It was an easy decision for EHS athletic director Cole Kanyer and the committee to induct Steindl.

“We’ve had several high-profile athletes such as Dan Kelleher, Ja’Warren Hooker, Brian Habib, who we had, in our brains, at the inception of this celebration. And Kayla was right there among the top as well,” Kanyer said.

Steindl went on to play four seasons with the Zags, where she was a two-time All-West Coast Conference honoree. As a senior in the 2011-12 season, the 6-foot-2 forward averaged a team-leading 16.4 points, 7.5 rebounds and 1.5 blocks per game. In the 2011-12 postseason, Steindl averaged a sterling 23.2 points, 6.0 rebounds and 2.0 assists over five games, including three in the NCAA Tournament.

Steindl went to the ESPN studios in Connecticut for the WNBA draft. She was one of the 15 players to receive an invite to attend.

“That was all just absolutely mind-blowing to be part of it,” she said.

She was drafted by the defending champions Minnesota Lynx with the 19th overall pick. But it was short-lived, as she and many others were waived.

“Once all their Olympians and championship-winning players came back from their overseas job, they basically sent us packing,” Steindl said.

Then she, like her older sister Tami Willey, found her place in Australia. She’s been part of three Women’s National Basketball League (WNBL) teams and is currently rostered with the Perth Lynx.

With a 10-year age gap between her and Willey, they never got a chance to play with or against each other until they vied together on the Mackay Meteorettes, a semi-professional team in Queensland in the 2014 and ’15 seasons.

Willey was one of the reasons Steindl decided to pursue basketball in the land down under.

After Willey graduated from the University of Portland in 2002, she had no aspirations to continue the sport where she was a two-time WCC all-conference selection. But one of her college teammates was from Australia and Willey made the decision to travel overseas to compete. She enjoyed a lengthy career, retiring in 2017.

“Oh, wonderful, except it’s too far away,” Dave Standish laughed when asked on what it’s like to have both daughters play in Australia.

While it may seem the Standishs are merely a basketball family because of the daughters’ prosperity at the college and professional level, it never was just basketball. All four siblings (Willey, Nate Standish, Joe Standish, and Steindl) were successful three-sport athletes at EHS.

“We don’t believe in a main sport,” Dave Standish said. “We believe in all of our kids playing in three sports. My opinion is one sport prepares you for another sport.”

She won’t be playing professionally next season. The couple is due for their first child together.

After that, she isn’t sure if she’ll continue basketball.

“To be honest, I think I’m finished playing professionally,” Kayla said. “I’ve enjoyed my time, and I feel like I could walk away happily with what I’ve done with it all.”

Kayla hasn’t been back to Ellensburg since she lost her mother in 2018. It may not be in the near future, but she hopes one day she and her family can be living in Ellensburg. She’s planning on being at the HOF ceremony on Sept. 21.

She’s prepared to extol EHS in her speech, but also her father and two brothers who showed unconditional support throughout her years of sports — especially in high school.

“I’m sure I’ll be quite an emotional mess, so I’ll try and keep it to three minutes,” Kayla said.