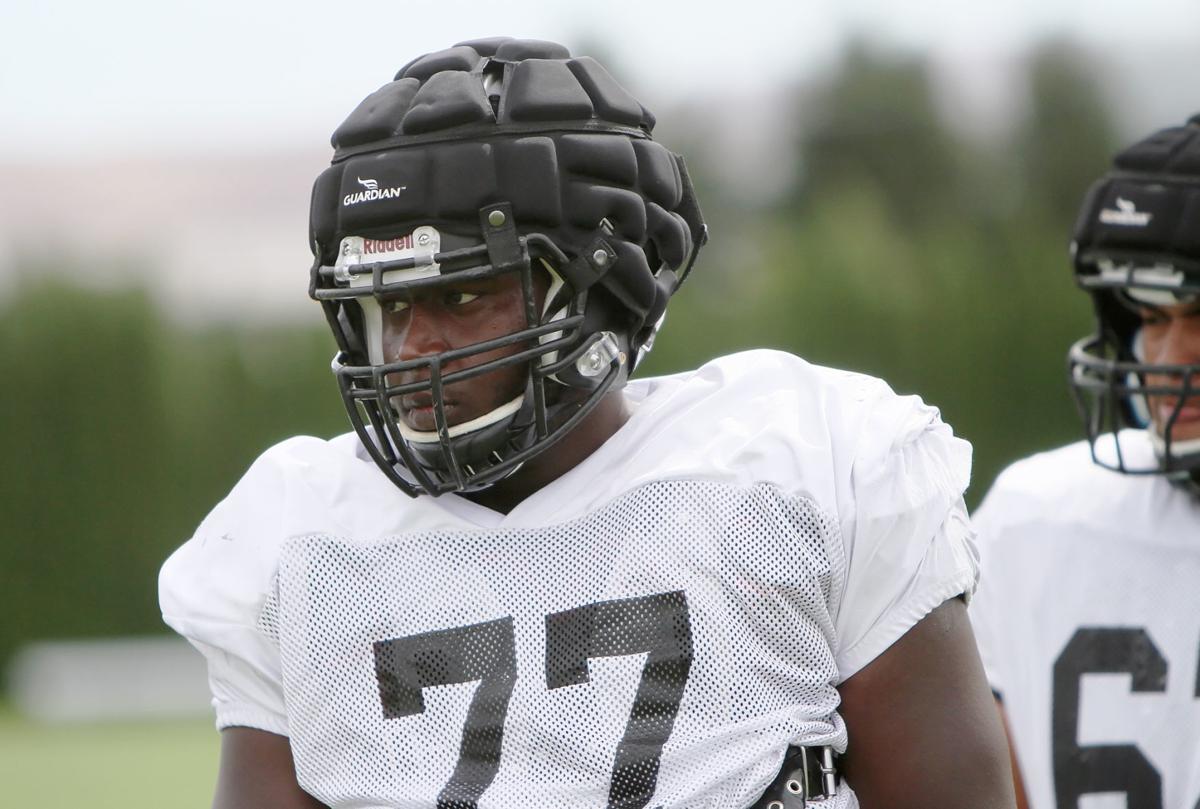 James Moore (77) looks on during Central Washington University football practice, this past summer. 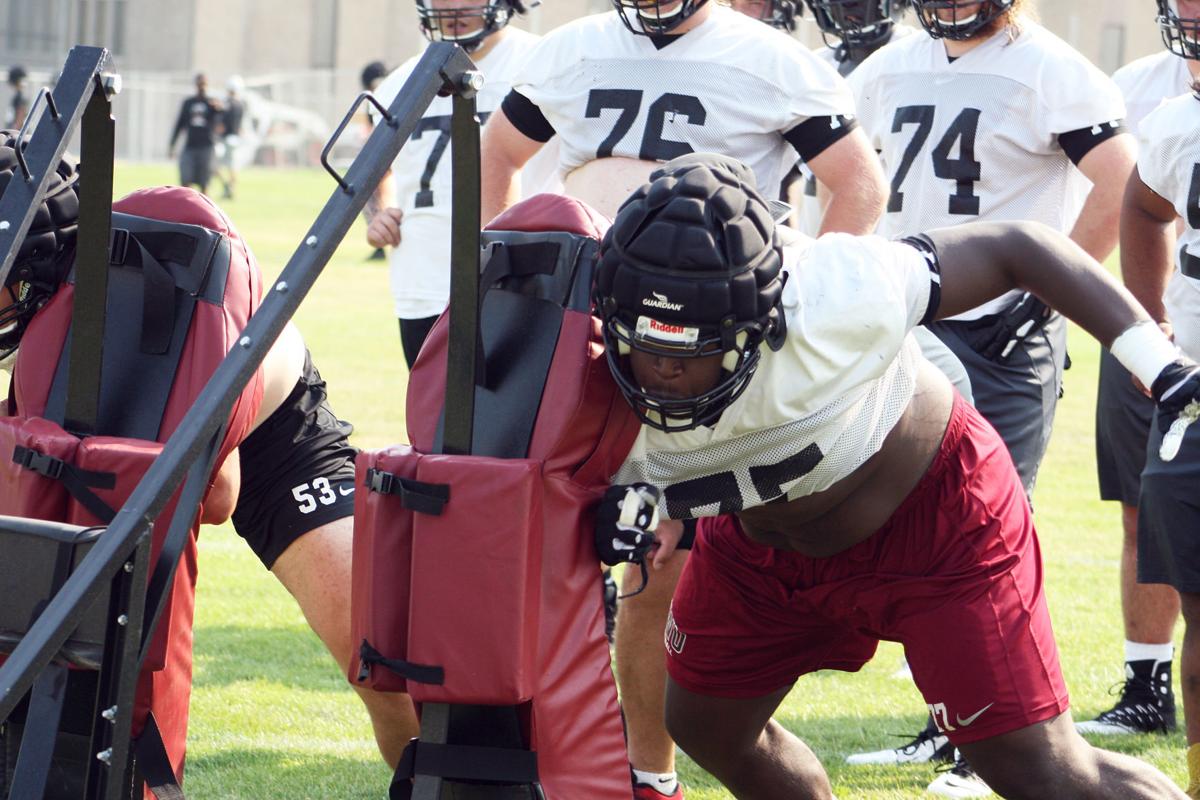 CWU senior offensive lineman James Moore (77) works on a drill during the first day of fall camp on Aug. 6, 2018.

James Moore (77) looks on during Central Washington University football practice, this past summer.

CWU senior offensive lineman James Moore (77) works on a drill during the first day of fall camp on Aug. 6, 2018.

James Moore had a dream during his senior year of high school when he was uncertain of his future beyond secondary school.

His dream was him playing at Tomlinson Stadium for the Central Washington University football team, looking down and visualizing the Wildcat symbol in his gloves. That’s when the standout offensive lineman for CWU knew it was his calling to pursue college athletics in Ellensburg — a place he didn’t even know existed when he was recruited.

“I didn’t even know where Ellensburg was,” Moore said.

Moore, a man of strong faith, stated the importance of religion in his life and firmly believed that this was the sign for him to head to Central.

“I feel like that was God telling me I needed to be here,” Moore said. “There is a reason why I need to be here, for bigger than me.”

But his heart wasn’t with football at first. He didn’t take a snap on the field for Bethel High School in Tacoma until his senior season — his love was on the basketball court. But a broken foot had Moore lose all scholarship offers for basketball, so if he wanted to continue his college education with athletics, it was to keep playing football.

It was difficult for him to accept the idea. He was still in endearment with basketball and didn’t fully invest himself into football yet. And he only would continue his schooling if he was to get a scholarship offer, coming from a struggling place where his opportunities weren’t exactly the best.

But CWU took a chance on the 6-foot 6-inch lineman during head coach Ian Shoemaker’s first season in 2014. And Moore was in bliss with everything about the program in regard to the people, culture and most importantly — Shoemaker believing in him, a kid who had a mere one year of experience of playing football.

While Shoemaker couldn’t promise him a full scholarship to begin, if Moore continued working and proved his legitimacy during his time with the program, he would be awarded — and he held his word.

“He believed in me, that’s what brought me here,” Moore said. “Yeah, the dream was part of it, the dream was a dream. But when it comes to understand the Central Washington way, wanting to win a Division II National Championship with all Washington kids, that is what I fell in love with.”

But freshman year at CWU, he had to recalibrate if he wanted to reach his highest potential on and off the field. He gained weight, wasn’t focused in the class room and offensive lineman coach Chris Fisk stepped in and helped Moore understand his purpose and where he can go beyond collegiate football.

Moore quickly matured, he recognized what he needed to do with attending class first, knowing if his grades weren’t right in the classroom, he couldn’t be on the field.

And Fisk went straight to his face telling him he needed to lose weight prior to his sophomore season. Moore didn’t take it personally, he took it as a challenge and lost 25 pounds. Walking on the CWU basketball team also helped that process.

“From the time that we got here to today, he’s definitely done a 180 degree turn in terms of who he is,” Fisk said. “Both as a person and a player, and a student. When we got here, he was not conscious, not really aware of some of the things he was doing both on and off the field.”

The senior has been a leader of a stout offensive line group. Moore started all 12 games last season in their Great Northwest Athletic Conference (GNAC) championship season and earned multiple honors.

He concluded his prosperous junior year with All-GNAC First Team; D2CCA All-Region First-Team; and D2CCA All-American. But it’s not enough for Moore.

Fisk saw a bigger jump this last summer going into his final season with CWU than the maturity he sustained after his freshman year. Moore is aware that he has the ability to go beyond and continue football into the professional level. So, he decided to stay in Ellensburg over the summer to work on some things to achieve that dream.

“Yeah, I had a good season, but I didn’t feel like I had a great season,” Moore said. “I feel like as a team we had a great season, but from an individual performance, I did not feel like I performed to the best of my ability. And I was hungry to get better, very thirsty to get better, understanding that I am getting closer to my dream and understanding not to get complacent. Don’t be complacent, that was one of my biggest fears in myself going from my junior year to senior year that I thought I have already arrived. When the best part about it, was I just got hungrier.”

Moore carries so much passion and commitment not only just to keep the hopes of moving on with the game into the next level, but for his family.

He has six siblings — four sisters, two brothers. Financially, it was tougher than some having a sizeable family and wants to make the most of this opportunity he has to play at the collegiate level with affectionate parents supporting him, giving him anything he needs to set him up for prosperity.

Moore, a four-year starter for CWU, has led his group into one of the more dominant offensive line productions in years. The offensive stats speak for itself.

Central averages 49.0 points per game which ranks third in all NCAA Division II. The team’s average of 538 yards a game also ranks third nationally. And the running back group has been scintillating all year with the tandem of sophomore Michael Roots and senior Cedric Cooper. The duo has been unfeasible to subside. Roots sits at 1,004 yards and Cooper with 904, both the conference’s top rushers. CWU averages a 274.4 yards per game on the ground.

The offensive line doesn’t get the notoriety it probably deserves, but they don’t worry about that. As long as they are 1-0 every week.

“They don’t care about those things,” Fisk said. “At the end of the day, they know why we are and are not successful at times. We got a group of guys that care about each other, love each other, and play for each other.”

Moore is graduating Central with a major in sociology and a minor in law and justice. If professional football doesn’t pan out, he wants to be a business owner. He is pursuing that degree more so for him, two things he enjoys learning.

But football is on his mind at the moment.

“I’m a long way from where I can be,” Moore said. “I’m working towards that every day, as a person, as a man, as a football player.”