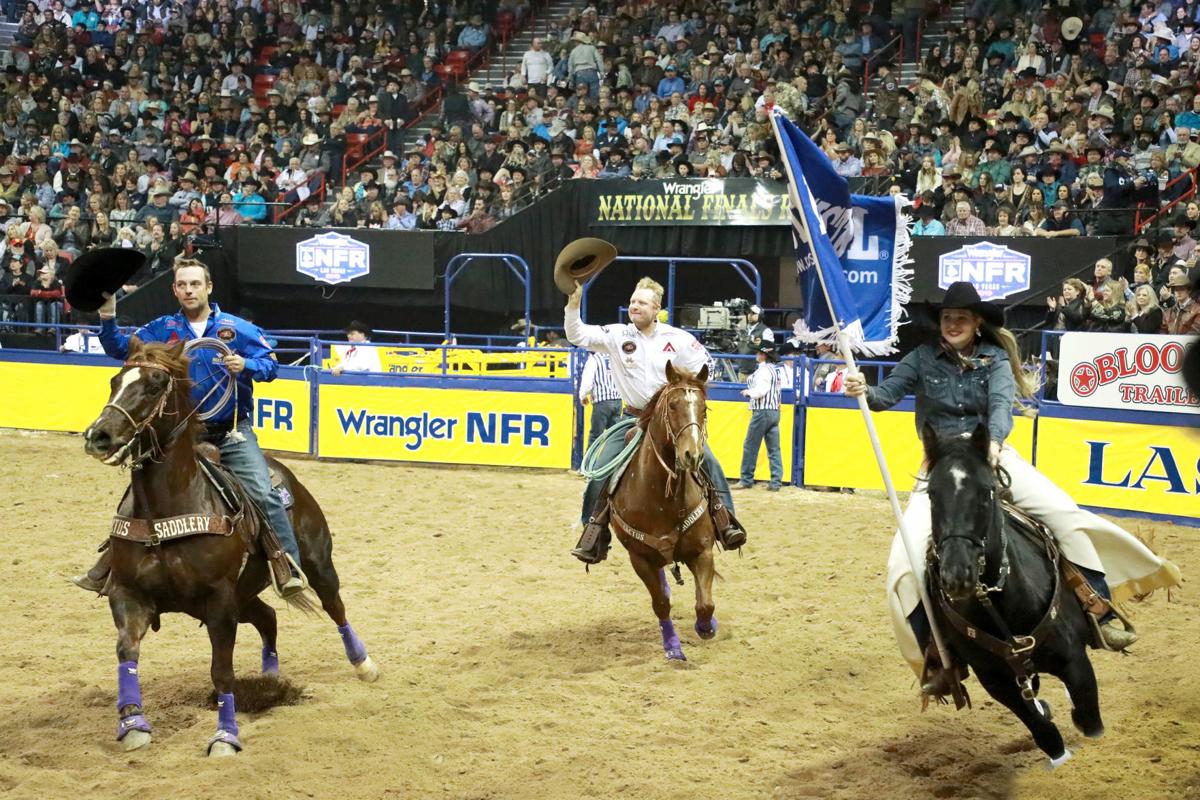 The Minor brothers, Riley (in blue) and Brady (in while) make their way around the Thomas and Mack arena dirt for the customary victory lap taken by go-round winners. The duo roped a 4-second steer to win Tuesday’s sixth round.

Ellensburg’s Riley Minor catches Tuesday’s steer as Brady Minor readies his heel shot. The team ropers won the round and $26,231 with a 4-second time.

The Minor brothers, Riley (in blue) and Brady (in while) make their way around the Thomas and Mack arena dirt for the customary victory lap taken by go-round winners. The duo roped a 4-second steer to win Tuesday’s sixth round.

Ellensburg’s Riley Minor catches Tuesday’s steer as Brady Minor readies his heel shot. The team ropers won the round and $26,231 with a 4-second time.

LAS VEGAS, Nev. — Night and day difference. That what it was comparing Monday and Tuesday’s team roping rounds.

Ellensburg’s Minor brothers — Riley on the header side, and Brady on the heeler side — bounced back from Monday’s leg penalty with a 4.0-second steer on Tuesday, good enough for first place in the round, $26,231 in go-round money and a huge shift in momentum to the good.

“I knew that was a good steer,” Riley said while waiting for the nightly buckle presentation to start. “We got a good start and everything fell into place.

“That was a better steer than I’ve drawn all week.”

Winning on that steer resulted in another go-round buckle for the duo, yet Riley couldn’t recall how many they had won over their career of 10 NFRs together.

“I don’t even know,” he said after thinking for a moment. “I hadn’t won one in two years, I know that.”

For those counting it was the seventh NFR go-round buckle the Minors have won together. Brady also won a round in 2006 when he and Garrett Tonozzi competed.

“It’s real difficult to get one and it’s the next best win compared to a world title,” Brady said in a PRCA release. “It just finally came together.”

Given the hype around a go-round victory, Riley was calm and collected.

“It feels good to win $26,000 on one run,” he acknowledged. “We moved up a little in the average, but it’s just the same plan. I’m just trying to do the same thing every night and keep the game plan. If we get one stopped fast, then we’ll get go-round money too.”

As he said, the Minors’ fast time, along with some misfortune by others — including a no-time by previous average leaders Chad Masters and Joseph Harrison — moved the brothers from seventh to fourth in the aggregate. If the average was paid out today, that’s a difference of $20,300 in payout.

However, tonight’s seventh round means the NFR is far from over for the Minors as well as everyone at Las Vegas’ Thomas and Mack Center. With four rounds to go, there is too much money to be won to predict the rest of the week.

It’s looking like two-time world champion Tyler Waguespack has the hot hand in steer wrestling. The Louisiana cowboy won the sixth round — his second go-round win this year — with a 3.8-second steer. With the $26,231 that comes with the win Waguespack is now $3,650 ahead of Ty Erickson in the world standings with $177,925. He’s also the top bulldogger in the average with a 25.5-second aggregate on six runs.

While Waguespack has been consistent for the entire NFR, tie-down roper Ty Harris is starting to turn it on. One night after winning Monday’s round with a 7.4-second calf, Harris was even better on Tuesday with a 7.1-second round and another go-round win. With just four out of six roped, Harris is 14th out of 15 and won’t be a factor in the average, but the Texas cowboy has won nearly $76,000 in six days.

Canadian Dawson Hay got back to eight seconds in a big way. Bucked off in the second, fourth and fifth rounds, Hay rode Mo Betta Rodeo’s Sue City Sue to 88.5 points and first place. Former world champion Zeke Thurston rode the same horse for 88 points and the win in Thursday’s opening round. Rusty Wright and Brody Cress (508.5 and 506.5 on six horses) are neck and neck in the average and are the lone two riders to cover all six broncs thus far.

Like Hay and Harris, Oregon cowgirl Amberleigh Moore won’t be much of a factor in the average due to two tipped barrels in round one. However, that hasn’t affected her ability to make go-round money each night. Moore’s 13.55-second run is the fastest so far through six rounds and it pushed her to a rodeo-leading $114,923 in earnings.

“Tonight, she was in a mood,” Moore told the WPRA of her 4-year old mount, Paige. “She was in a girl mood and had some attitude, so I wasn’t sure what I was going to get. She came in and just cranked one out. She was cranky and we were giving her treats and bribing her before we ran. That’s how moody she was and she’s never in a mood like that.”

“I knew I had the bull to win it on and then I just went from there,” he said in a PRCA interview. “He tried to buck me off right out of the chute, but I kept going to him.”

While he technically isn’t this year’s bull riding world champion yet, Sage Kimzey is in the driver’s seat even though he hasn’t quite wrapped up his sixth straight Gold Buckle. Kimzey has $330,252 in earnings, basically $108,000 ahead of Campbell in second. With four more nights of $26,231 going to the winners, as well as the $67,269 for the average winner, there are too many variables to crown the champ yet.

Tonight’s seventh round begins at 7 p.m.