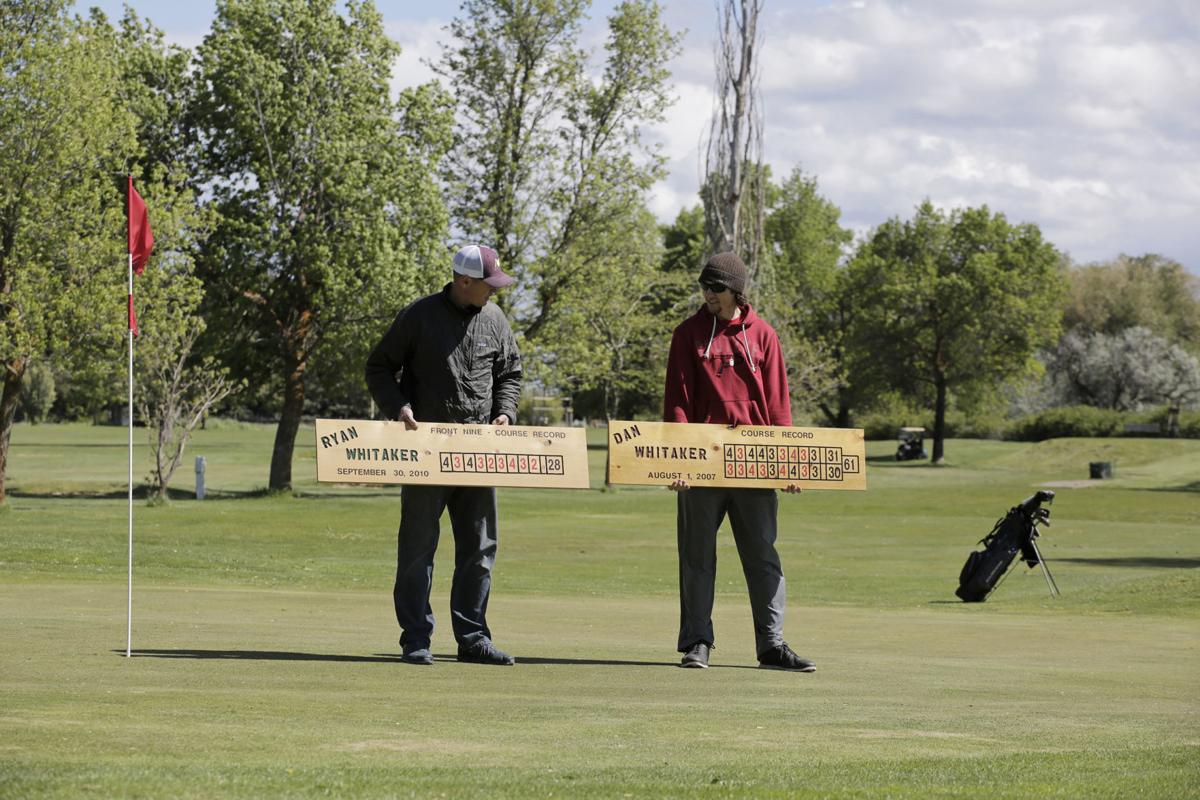 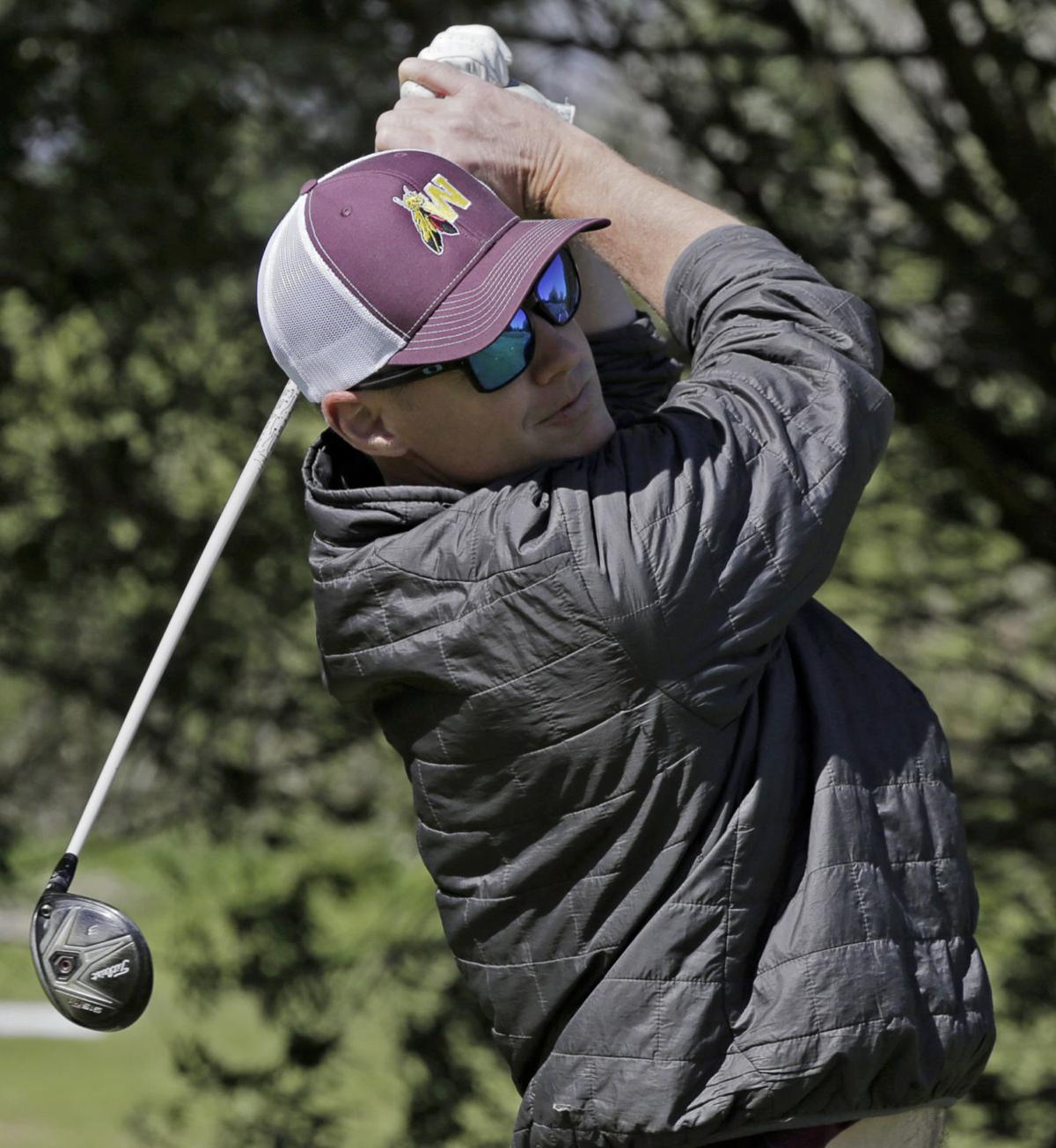 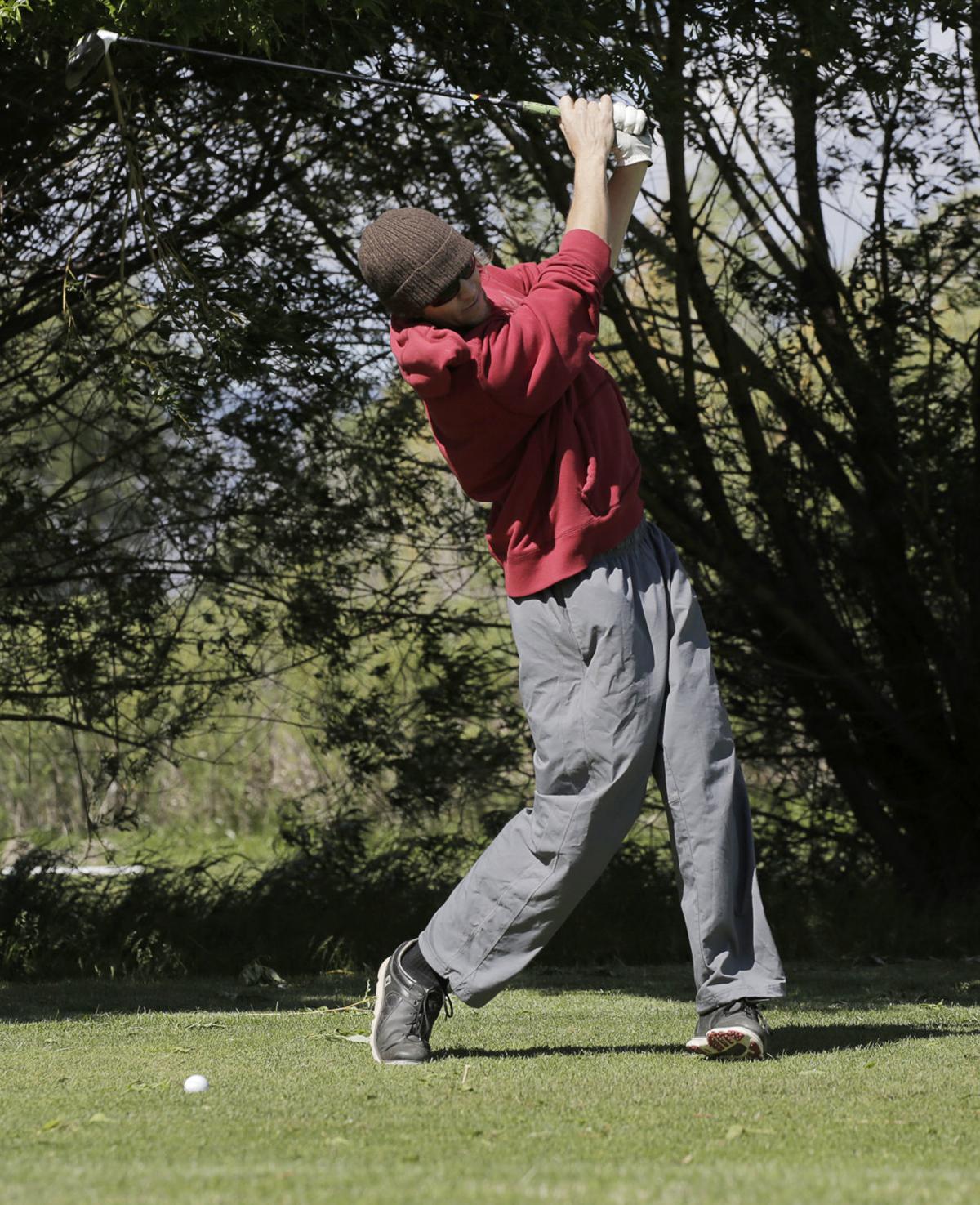 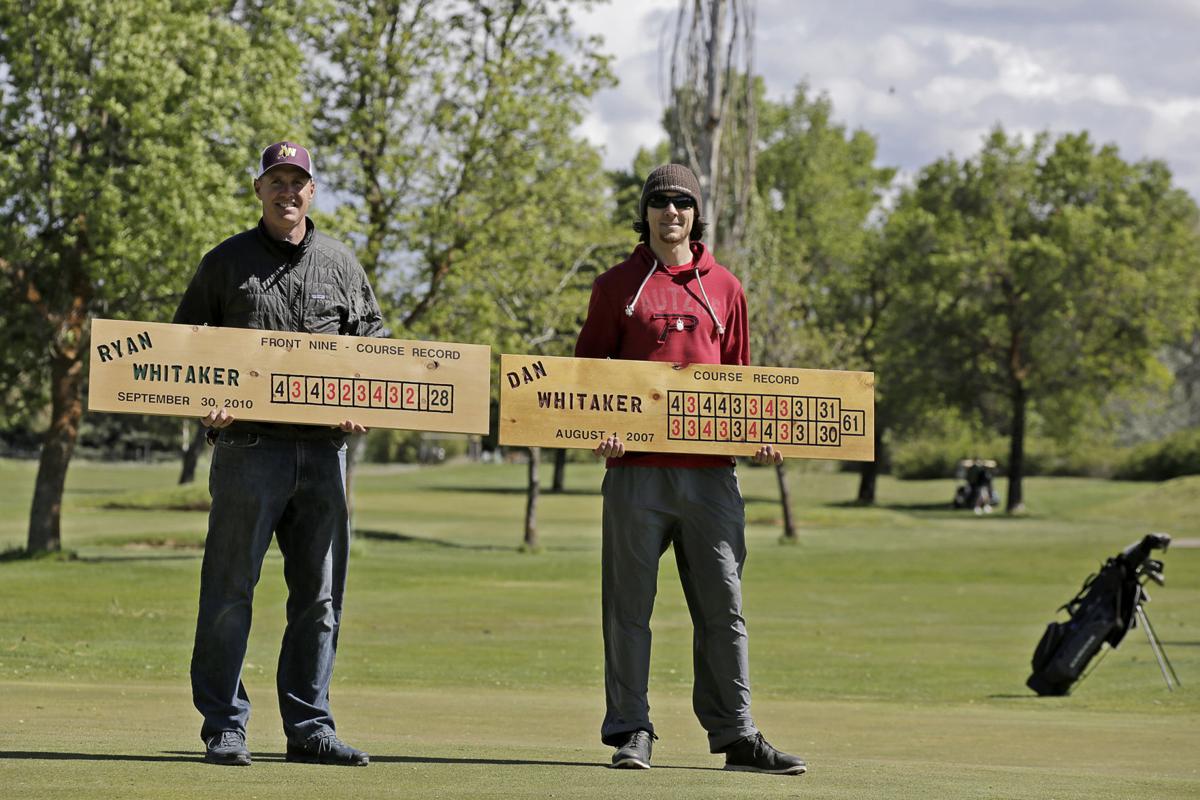 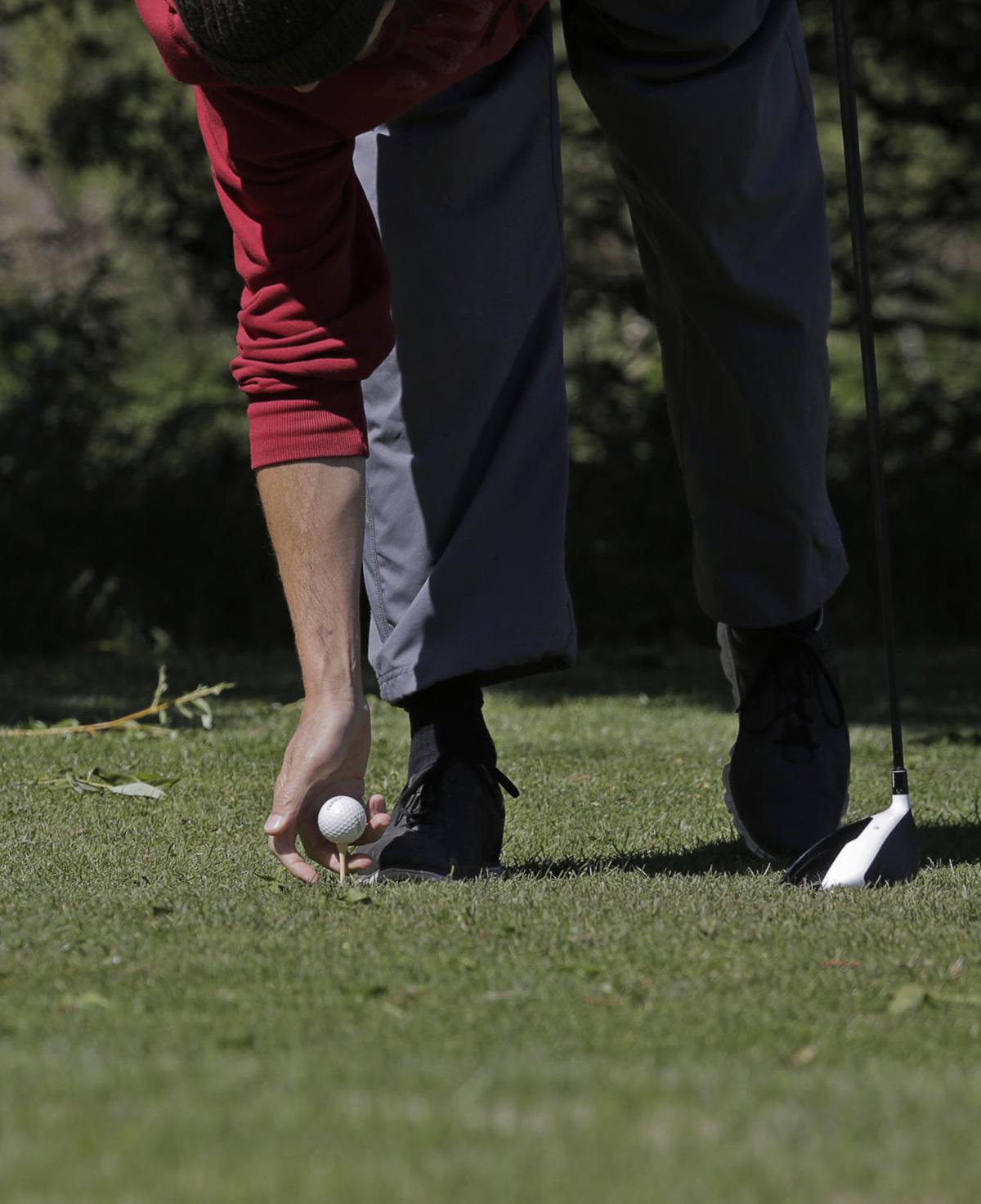 Ellensburg Golf & Country Club course record holder for 18 holes Dan Whitaker sets his ball on a tee for teeing off Thursday on the first hole. Whitaker scored 61 on 18 holes Aug. 1, 2007.

Ellensburg Golf & Country Club course record holder for 18 holes Dan Whitaker sets his ball on a tee for teeing off Thursday on the first hole. Whitaker scored 61 on 18 holes Aug. 1, 2007.

Tom Whitaker urged and prodded his oldest son, Ryan, to finish out the back nine at Ellensburg Golf Club after shooting a sterling 28 on the front. But with Ryan having his birthday party to attend and darkness looming in September of 2010, he opted not to.

And almost 10 years later, Ryan asks himself what could have been if he did, in fact, play the final nine holes.

“For some reason, I was committed mentally getting to that birthday party and really never planned on playing the back nine," he said. "Every time I look at that sign, I still wonder what I could have shot on the back nine that day.”

Whenever Ryan steps into the pro shop at Ellensburg Golf Club, he glances not only at the wooden plaque the club honored him with his hole by hole score and name carved into it, but also his brother Dan's, who holds the 18-hole record.

Dan shot a 61 in August of 2007, which snapped the record holders of John Banks, Dave Powell and Lynn Jenison, who all shot 62. Jenison shot the latter 62, which was roughly 20 years ago, according to Ellensburg Golf Club owner Frank Crimp.

The brothers weren’t in the group for each other’s indelible rounds, but parents, Tom and Peg, were.

What’s more impressive about Ryan’s round was he hadn’t swung a club in months, according to Dan. At the time, Ryan was immersed in masonry. But they were scheduled to play a Pro-Am tournament the next day, so Ryan wanted to prepare for it.

“He called me or something, he’s like ‘well, my swing's feeling pretty good for tomorrow’ and he told me what he shot, and I go, ‘Holy (expletive), why didn’t you play the back nine?’” Dan said. “He goes, ‘well, I got to have dinner and there were groups out, I didn’t know if I had enough time to finish, so I just bagged it.’”

After making par on the first and third holes and a birdie in between, Ryan rallied off six straight birdies. He said he couldn’t miss a putt that day.

Dan’s 61 came amid a hallmark year, because a few months later he earned himself a spot at the U.S. Mid-Amateur at Bandon Dunes in Oregon. Dan finished runner-up to Trip Kuehne in the championship round of match play (9 & 7), who famously lost to an 18-year old Tiger Woods in the 1994 U.S. Amateur. Dan narrowly missed out on qualifying for the 2008 Masters at Augusta National Golf Club.

“We were going out there all the time,” Dan said of Ellensburg Golf Club. “At that point my swing was feeling really good. I wasn’t out working on my game as much, I’d just go out and play for a score every day.”

The Whitaker brothers are Cle Elum natives, and between them, they have won three 1A state golf titles at Cle Elum-Roslyn High School. CE-R didn’t have a golf team then, but partnered with a Yakima school so Dan and Ryan could compete on the same tournament schedule. During Ryan’s junior year at state, he finished first and Dan seventh, which placed them second as a team — with only two golfers.

Golf became part of their lives early after the Whitaker family moved from the West Side in 1986. Tom got back into playing and with the boys homeschooled, he brought them along and taught them the fundamentals of the game.

“My dad had been a good golfer when he was younger and kind of gave it up a decade or so to start a family,” Ryan said. “I was about 7, 8-years-old and my dad got a wild hair (to play again). The classic line is, ‘I’m going to take a couple of weeks and get my golf game back in shape.’ We’ve all been trying to get our golf game in shape since.”

Said Dan: “It was pretty much a daily commute. We pile in the car and we’d do homework in the car on the way down and back. We’d practice golf and play all day, it was awesome.”

The brothers enjoyed success at the junior level and Ryan then played four seasons at Arizona State University and was teammates with five players who went on to play in the PGA Tour, including Paul Casey.

Dan, who’s two years younger than Ryan, had an opportunity to play at Washington State University, but there were a few impasses.

“At the end of that spring semester, I played nine with the coach and the assistant coach and they said they were interested and said to keep in touch over the summer,” Dan said. “Then I had a really crappy summer, I didn’t play hardly in any good tournaments. Just did not play well. On top of that, they were saying you can’t play intramural sports, practices every day. The only reason I enjoyed college because of intramural sports, playing open gym four hours every night at the rec center. There’s no way I would have wanted to be there if it was regimented practices and all that. I just never called him back.”

But Dan continued to vie in local and regional golf events, and still does today.

Currently, Dan and Ryan manage multiple rental units in Ellensburg. Ryan earned his class A status in the golf industry last year and he's in between jobs as a PGA professional.

So, the lingering question remains, could have Ryan beat Dan’s 18-hole course record that day?

“As good as he is and was at the time, I’d say he had a pretty decent shot at it,” Dan said.

“… Hopefully someday we’ll be able to give him another run, maybe drop him a shot or two.”