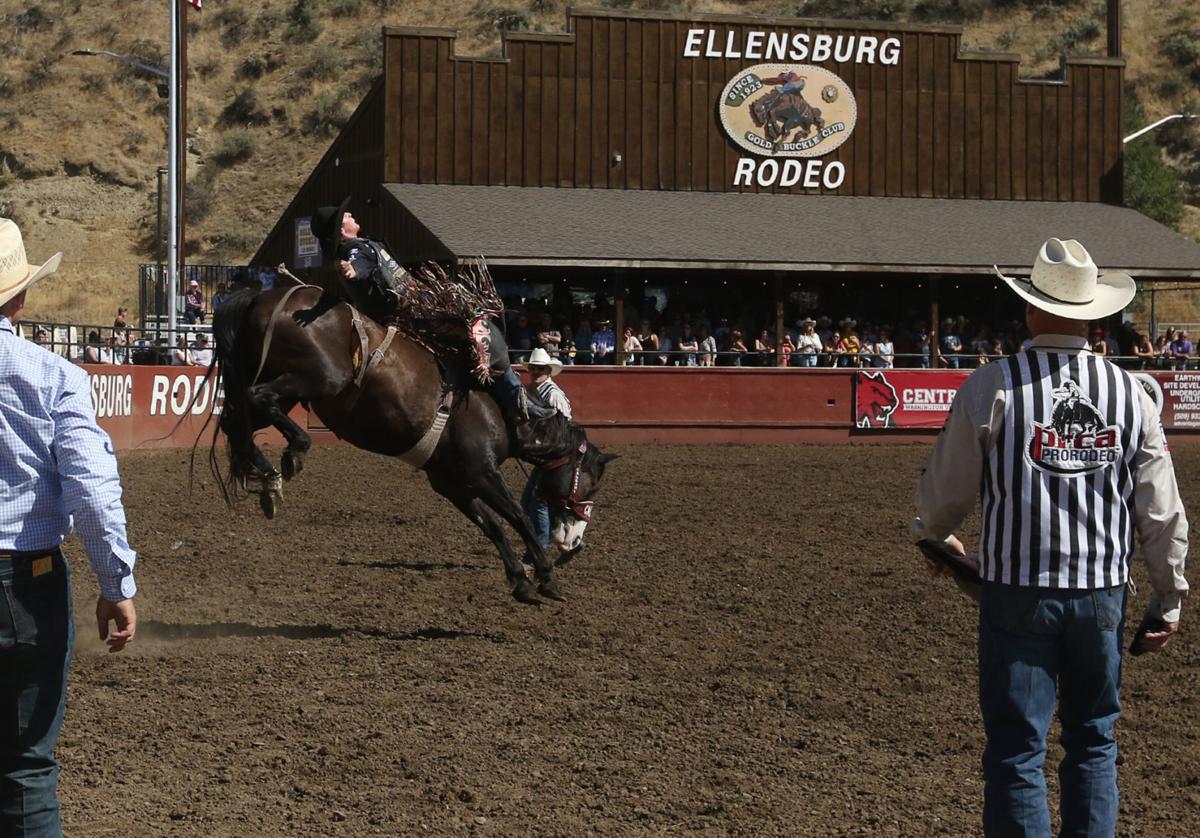 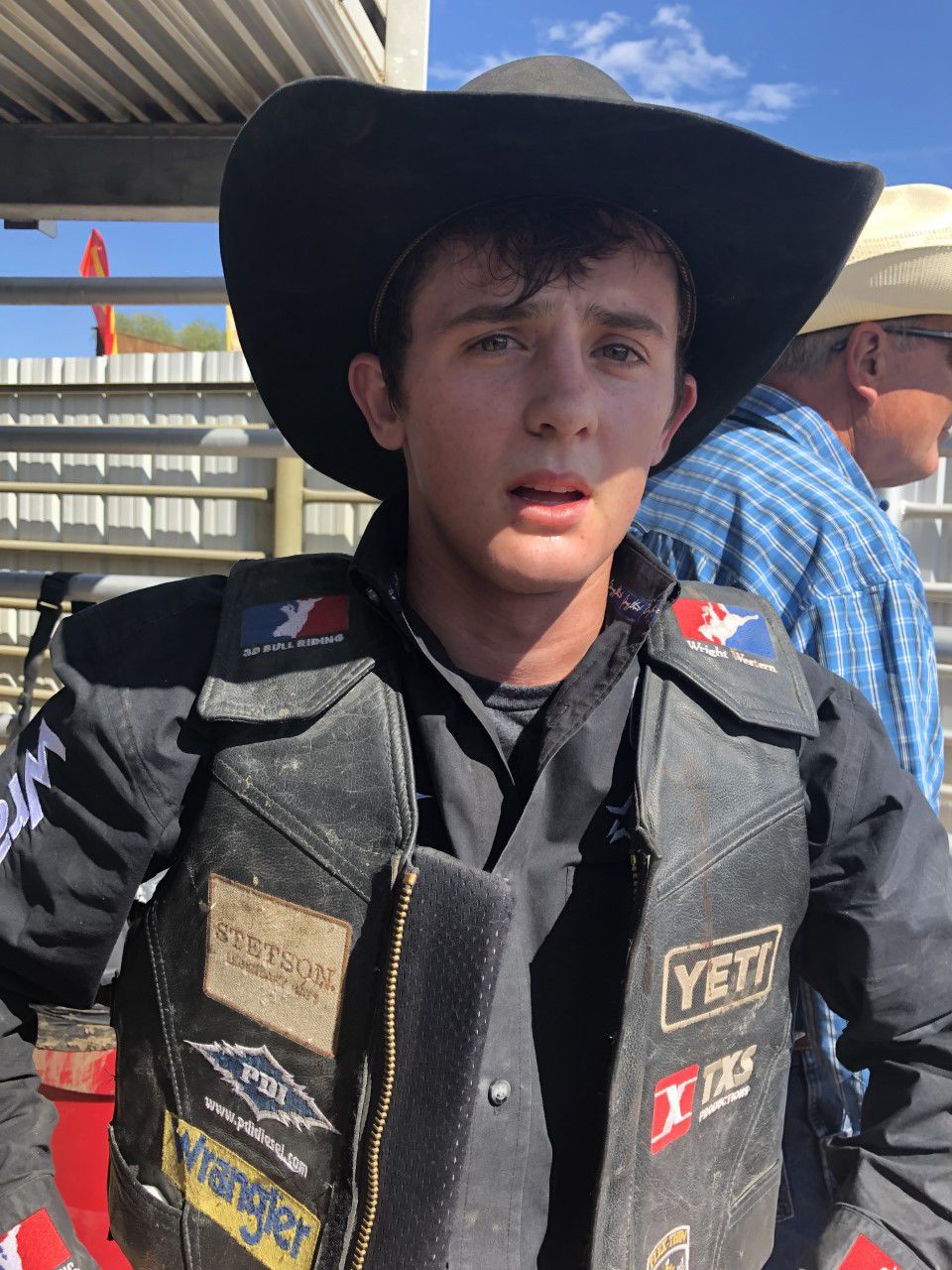 This is 20-year-old Stetson Wright’s first Ellensburg Rodeo and his first ride back since his jaw was broken in five places 30 days ago. 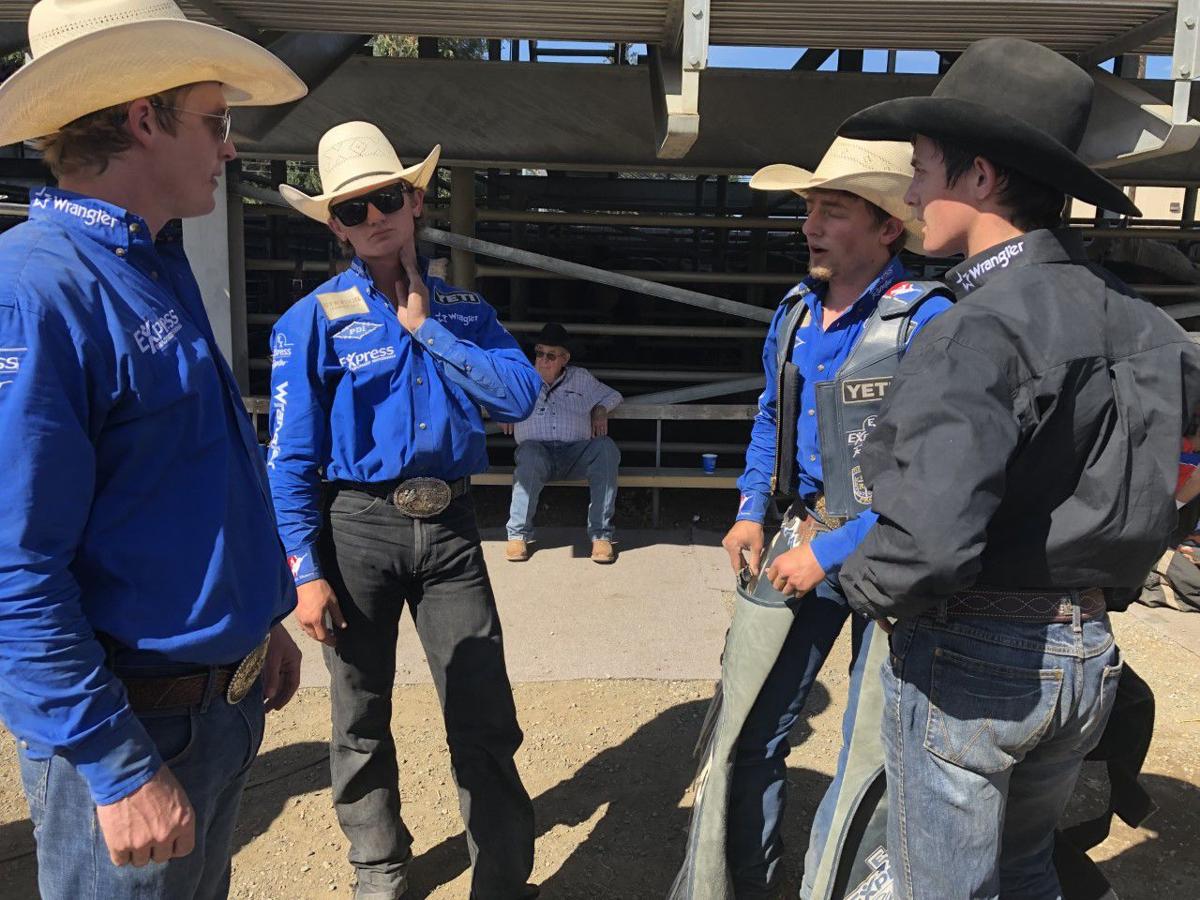 The Wright brothers, Ryder, second from left, Rusty and Stetson talk behind the chutes at the Ellensburg Rodeo Saturday. Their father Cody was a two-time saddle bronc world champion, and his boys are following in his boot steps.

This is 20-year-old Stetson Wright’s first Ellensburg Rodeo and his first ride back since his jaw was broken in five places 30 days ago.

The Wright brothers, Ryder, second from left, Rusty and Stetson talk behind the chutes at the Ellensburg Rodeo Saturday. Their father Cody was a two-time saddle bronc world champion, and his boys are following in his boot steps.

He wouldn’t recommend the Stetson Wright diet plan to anybody, having lost 25 pounds to his already lanky frame.

But now he’s back on the broncs and eating a little barbecue, so life is getting back to normal for the rising star on the Professional Rodeo Cowboys Association, considering the fact he was in a massive wreck just 30 days ago.

The 20-year-old Milfred, Utah cowboy had his jaw broken in five places when the horn of Last Cigarette (4L & Diamond S Rodeo) slipped up under the protective mask and caught him in the face at the Dodge City (Kan.) Roundup Rodeo on July 31.

This is Stetson’s first Ellensburg Rodeo and his first ride back since he posted the 86-point ride in Dodge City, just 30 days ago. Even though they don’t say it out loud, the look in the Wright clan’s eyes indicated they knew how close to really bad the wreck really was.

“My mom (ShaRee Wright) didn’t want him to ride here (so soon),” Ryder said with a look in his eye that both Rusty and Stetson acknowledged with a nod as they stood around in the staging area behind the chutes Saturday afternoon. There might be nine Wrights listed in the PRCA cowboy bios, but you can expect ShaRee has her say about what goes on.

Since Stetson sits No. 2 in the RAM World Standings in bull riding, having already punched his ticket to the National Finals Rodeo, his focus will be on saddle broncs for the remainder of the season. Coming to Ellensburg isn’t so much defying his mom’s wishes as it is taking his father Cody Wright’s advice. Cody won saddle bronc world championships in 2008 and 2010.

“Mom was concerned, but I told her how I felt and she trusted that,” Stetson said. “It’s not really a rush to get back as much as it is I felt I was ready. My dad told me I could still make the NFR in saddle broncs. And if he wasn’t worried, I wasn’t going to be.”

Stetson might be the leading candidate for Rookie of the Year and the first rough stock rider on top of the PRCA All-Around since Ty Murray (1998), but there was a little nervous energy as he climbed aboard. He’s won bull riding at Cheyenne Frontier Days and put up two of the top four bull rides this year, but saddle broncs have a little kick, too, and he just wanted to make the whistle.

The nervous energy wasn’t confined to Stetson as he climbed aboard, preparing for what would be an 85-point ride to secure a spot in the short-go. Ryder had just put up the saddle bronc leading 87 on Flying 5 Rodeo’s Can’t Wait. He waved off an interview request, saying “I gotta see this next ride,” before jumping up on the gate to help Stetson in the chute.

As they do most everywhere they ride, the Wright boys help each other, and Rusty, who would later post an 83.5 ride to make it three Wrights in the Ellensburg short-go, climbed up on the platform behind the chute to help with the rigging and making sure his little brother had everything he needed.

“(Steton’s) wreck was scary. I watched it on Facebook. It isn’t a good feeling knowing your little brother’s hurt and there isn’t anything you can do about it,” Rusty said. “I was really nervous today, because I know what it’s like to get hurt and come back after that. You’re not totally confident, so I just told him to stick to the routine.

“I don’t know if him being here is a cowboy thing or stupid, but you have to be a little bit stupid or you wouldn’t rodeo.”

Both Ryder and Rusty dropped everything they were doing at the various rodeos they were at in Kansas and Iowa and made the drive to Wichita, Kan., where Dodge City officials had rushed Stetson.

“I knew it was bad, but he was still alive so it don’t matter. In rodeo, it’s not if you’re going to get hurt, it’s when and how bad,” Ryder said. “So to watch him get back up today made me a little nervous, just because I knew everything he’d been through to get here.”