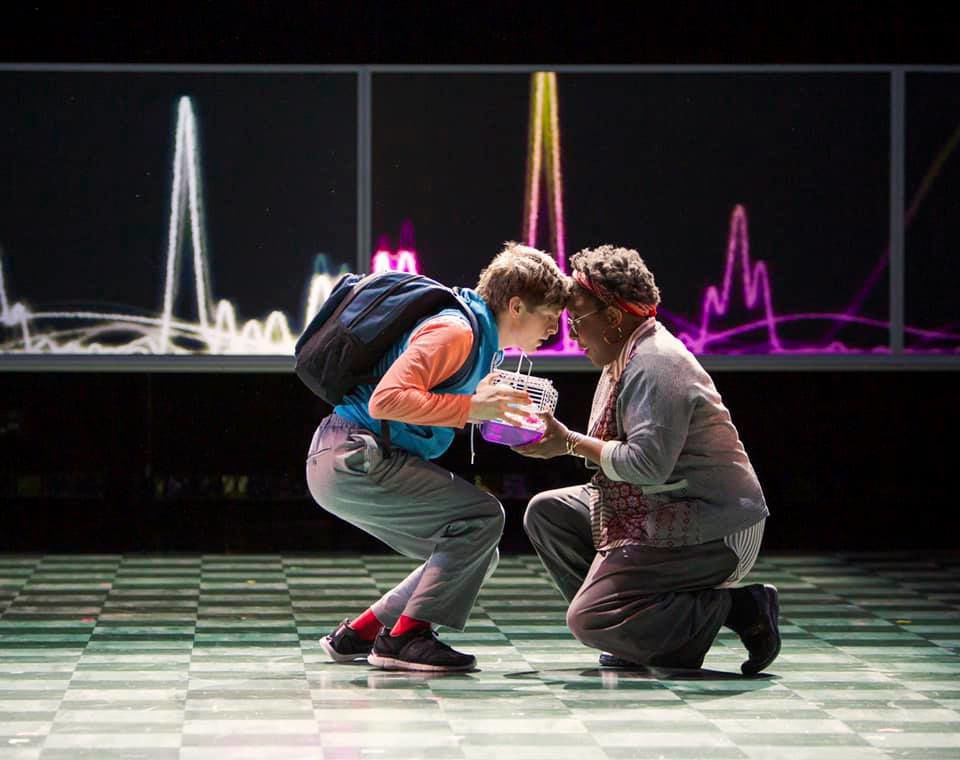 Michael Krenning and Jehan Osanyin give superb performances in Village Theatre’s production of “The Curious Incident Of The Dog In The Night Time,” now playing in Issaquah through April 21, and April 26-May 19 at Everett Performing Arts Center.

ISSAQUAH — Village Theatre’s production of “The Curious Incident Of The Dog In The Night Time,” adapted for the stage by Simon Stephens from the novel by Mark Haddon, is an alternately absorbing and disturbing coming of age drama. The story is told from the unique perspective of protagonist Christopher, a brilliant, high functioning 15 year old with autism.

The play has received great critical acclaim and international success. The original 2013 British production won seven “Olivier Awards” and ran for 1,600 performances. Success continued when the play moved to Broadway in 2014, winning the “Tony Award” for Best Play and Best Actor for Alex Sharp as Christopher; running for 800 performances.

Jerry Dixon directs the Village Theatre production with sensitivity and intelligence. The production employs projection designs by Gregory W. Towle and an original musical score by Curtis Moore to draw the audience into Christopher’s perspective. As compelling as everything is, I feel the individual elements are better than the play as a whole. The production and performances are excellent, but the play is problematic on several levels.

The “incident” of the play’s title is the horrible murder of an innocent dog. Christopher (Michael Krenning) is determined to discover who killed the dog of his neighbor Mrs. Shears (Anne Allgood), and he takes to the task with the determination and precision of Sherlock Holmes. During the investigation, he learns that his dad Ed (James D. Sasser) has told him a terrible lie for years. While searching in his dad’s bedroom, Christopher finds over 40 letters written to him by his mother Judy. But how can this be? Ed told him that Judy died years ago, after a heart attack. Turns out, Judy (Kathryn Van Meter) is very much alive; and her letters reveal her to be a caring, although confused and flawed, mother. Judy merely left Ed after an affair with Mr. Shears (Eric Jensen). Far worse, Ed confesses to killing Mrs. Shears’ dog out of some twisted retaliation or revenge. This is too much for Christopher to bear. Christopher reasons that if his dad can kill an innocent dog, he can kill him too. Stealing his dad’s bank card, Christopher runs away to London; to find his mother Judy and live with her.

Act 2 is largely concerned with Christopher’s journey to London. Such a long journey can be daunting for anyone; but the stress, combined with Christopher’s autism, could send him into emotional and sensory overload. Christopher, however, succeeds remarkably well on his own. Judy is overjoyed to see him, but appalled that Ed hid her letters and told him she was dead; effectively erasing her from his life for several years. By the time Ed appears, Christopher has decided to return home to complete his school exams. But Christopher is clearly mistrustful of Ed. Judy resolves to return with Christopher, in order to support and protect him.

The role of Christopher is extremely demanding and physically exhausting. Michael Krenning gives an outstanding performance, devoid of theatrical artifice and infused with a strong, believable, and natural sincerity. JeHan Osanyin is also superb as Christopher’s supportive schoolteacher Siobhan. She is the type of teacher every student wishes for. Siobhan, who narrates much of the story reading from Christopher’s journals, knows he is an intelligent, brilliant, and fully capable human being. Siobhan interacts with Christopher on his own terms, facilitating his goals and encouraging him to become the person he wants to be.

Kathryn Van Meter is deeply touching as Judy, the parent who never wished to be absent from Christopher’s life. When she is given the opportunity that Ed denied her, she obviously struggles, but becomes a very supportive mother.

The role of Christopher is demanding, but James D. Sasser has the most difficult role as Ed. To my mind, their is no justification whatsoever for Ed’s horrible actions. But the play lets him off the hook for everything. The play takes the casual attitude that the murder of a dog is a “little” crime. Since dogs are not humans, they are less important. As an animal advocate and dog protector for decades, I was offended by this. The blow is softened somewhat when Ed brings a puppy as a peace offering, promising to never harm the puppy or Christopher. The puppy is definitely adorable and heartwarming, but the swift dad and son truce is more emotionally manipulative than dramatically sound and convincing.

The play does reach a satisfactory conclusion. Having successfully navigated the journey from home to London and back again, Christopher knows he can have a life of his own and accomplish anything. Christopher’s journey takes him from tragedy to self-empowerment. And that, along with Michael Krenning’s tour-de-force performance, makes “Curious Incident” a worthwhile and rewarding experience.

What: “The Curious Incident Of The Dog In The Night Time”

When: Now Playing through April 21 at Village Theatre in Issaquah; and

April 26-May 19 at the Everett Performing Arts Center.